Jeff Minter is back and for those of you who may be unaware of the name, Jeff most recently gave us the very challenging and very trippy runner type game Polybius that had you cruising through 8-bit inspired worlds full some techno-trance music and intense, fun gameplay.  We now get his next venture into VR with the Minotaur Arcade Vol. 1 which is a collection of 2 of his previous mobile titles; Grid Runner and Goatup, re-worked for VR and still containing the visual and audio stylings that Mr. Minter is known for. 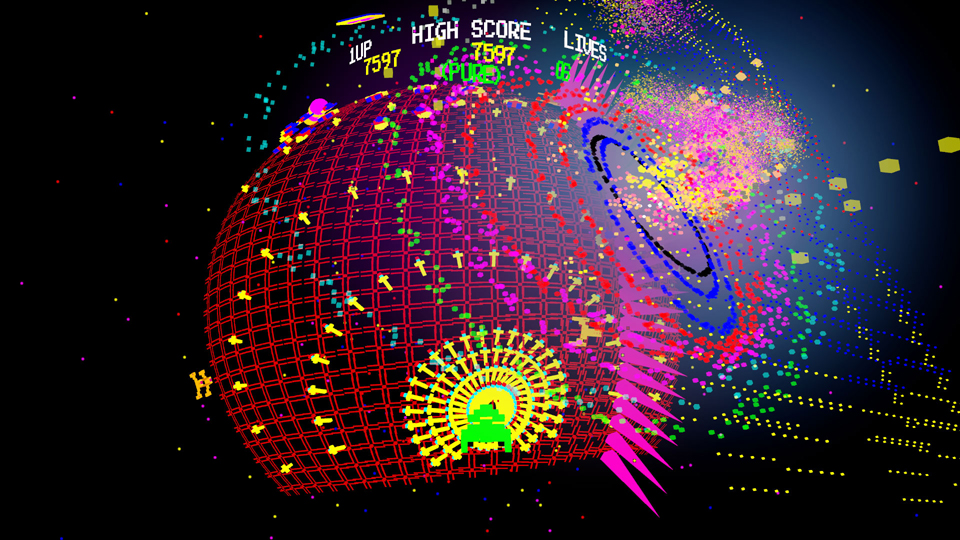 Things get hectic and colorful in Grid Runner.

Both games support only the DS4 with Grid Runner playing like a top-down shooter in the vein of Robotron while Goatup has you controlling a goat as it climbs higher and higher up a tower.  Grid Runner has you in charge of a ship on a closed off grid as a variety of enemies and obstacles try and take you out while your little ship auto-fires it’s weapons.  Power-ups are of course available changing up your bullet types from multi-directional blasts, spread-shots, lasers and a host more and are much needed to get those high scores.  Goatup plays like a simple platformer with the goals being to collect items by mowing through the grass covered platforms on a circular tower while also making babies with lady goats you find on your way to the top.  There are enemies to avoid and kill and the further you get, the more challenging the game becomes. 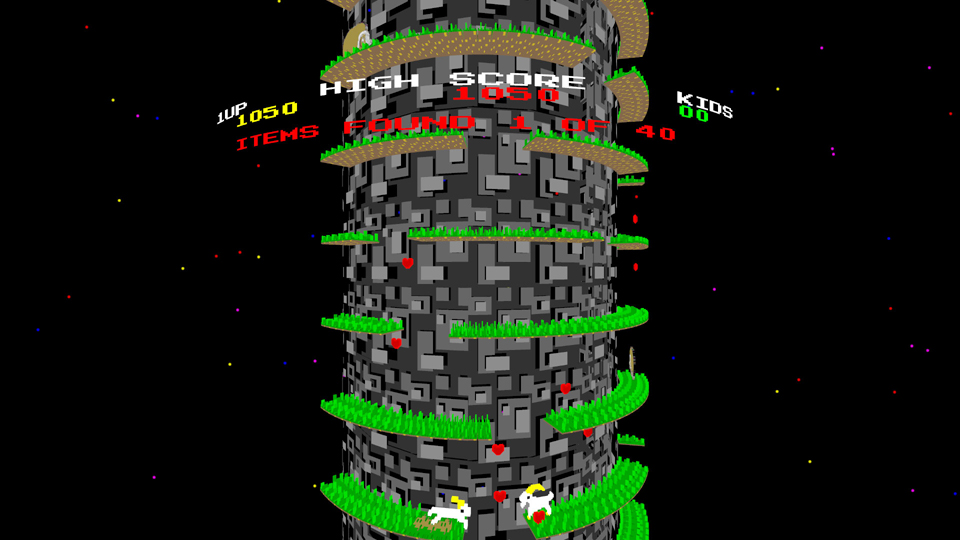 Help that goat climb up and up and up!

Both titles are a celebration of 4 and 8-bit arcade games having super simplistic sprites and level design which might not sound like a great fit for VR but allows for some insane visuals that happen at very high frame rate.  Grid Runner is the clear winner in the ocular orgasm department with VR implementation of the game curving everything to give it a 3d look.  Every stage mixes up the action by changing the grid you are on decreasing or increasing it’s size as well shape changes so while you are initially playing on a square grid, soon enough you’ll be playing on grids bent in different directions or are spherical in nature.  Levels may pulse with activity and as you destroy enemies, they will explode into bright pixels flying all over the place and in face.  Goatup is a little less intense though still offers its own unique insanity as you climb the circular tower.  You’ll run into a host of enemies from yaks to people and as you scale the tower, the level themes change so initially you start at the grassy bottom but soon climb to neon rainbow themes platforms to roadways and bridges with a few more encountered before you reach the top.  The simple 8-bit presentation for either game pops in the headset and the visuals compliment the gameplay nicely, hearkening back to a simpler time in gaming, but with modern day challenge and visual tweaks to keep just about anyone entertained. 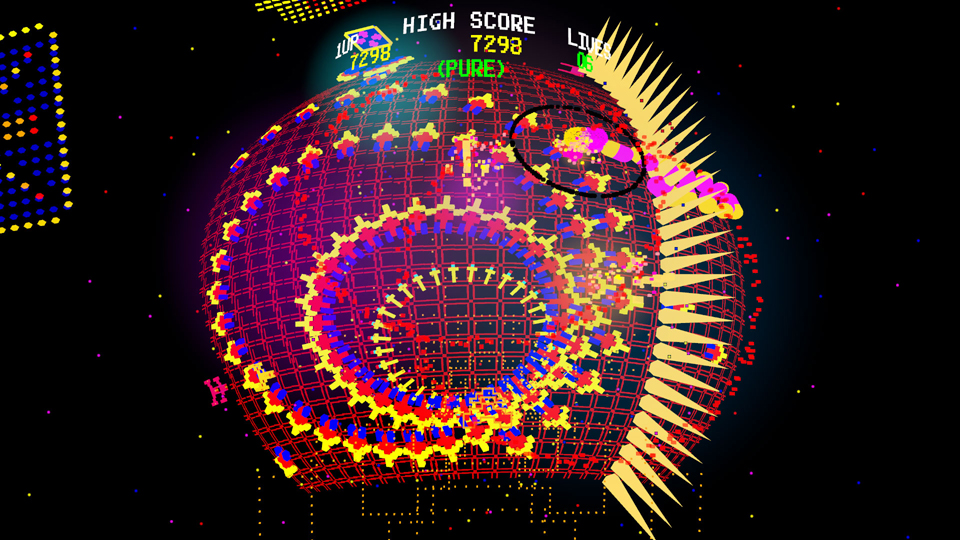 Look at all the pretty colors.

The retro look of this game is great and fitting in line with that visual style are the audio effects which are exactly what you would expect to hear from an arcade game from the early 80’s.  No music plays in either game allowing for the audio effects to pop and besides those classic audible effects are the more obscure and random noises akin to what we got in Polybius.  From the sounds of a big smooch, a roaring bull, the popping of a bubble and ton more random effects that add to the game.

Fans of the genres both theses games are based upon should find ample amounts of nostalgia and fun to carry them through hours of play.  With that said, if besting your score isn’t really a motivating factor then I think this micro collection of games may disappoint some.  Each one is great fun and is also very challenging with the emphasis being replay value, which is high, but that doesn’t mean that either game isn’t repetitious, and I think more casual players may play this for a few minutes before ducking out.  It’s great fun to see the retro visuals reworked for VR and they do a commendable job, but some may be a little underwhelmed by the visual throwback as it’s not exactly what VR is known for.   I also wouldn’t have minded seeing one or two other classic Llamasoft titles thrown in here as the 2 offered do feel light when you factor in the cost. 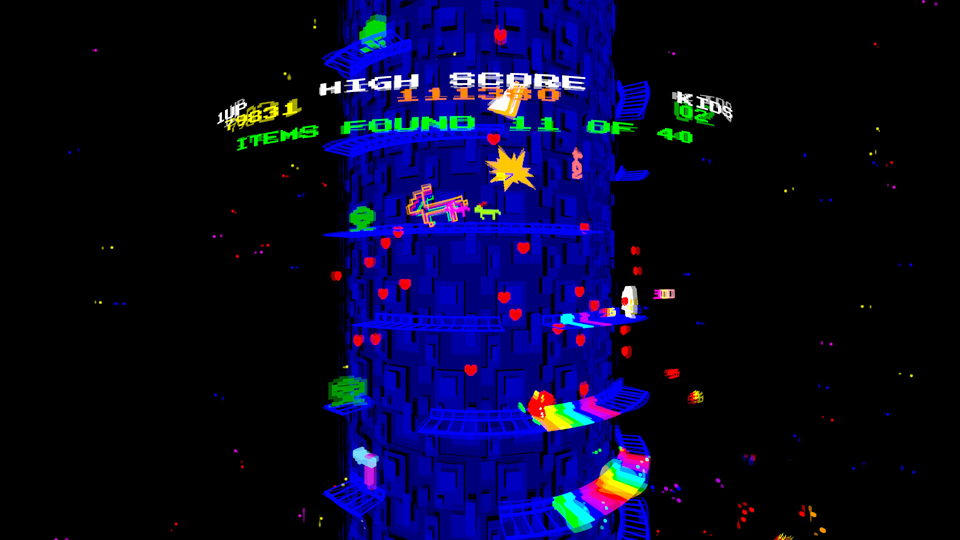 Minotaur Arcade Vol. 1 offers up 2 reimagining’s of classic arcade genres that look great in VR.  It’s all to easy to keep playing’ and that’s never a bad thing when it comes to video games.  With that said, the content value here still seems a little light and those looking for a more in depth or immersive game will probably be left wanting.  For those that love classic arcade action though, both games offer up insane and hectic action that we really don’t see enough of in VR.

What would I pay?  The asking price on this is $15US and that honestly seems a little too high for what’s here.  What’s here is quality but with only 2 games I can’t help but feel this should closer to the $10 price or $5 per game.  That said, if you get hooked on score chasing and love arcade classics, I guarantee these games will entertain you.

Llamasoft provided The VR Grid with a press code for this title and, regardless of this review, we thank them for that!