Contagion VR is a unique zombie-centric title with 3 mini-campaigns centered around the undead apocalypse.  For the most part you’ll be on your own in each campaign as you fend off the undead with any weapons you can find nearby. 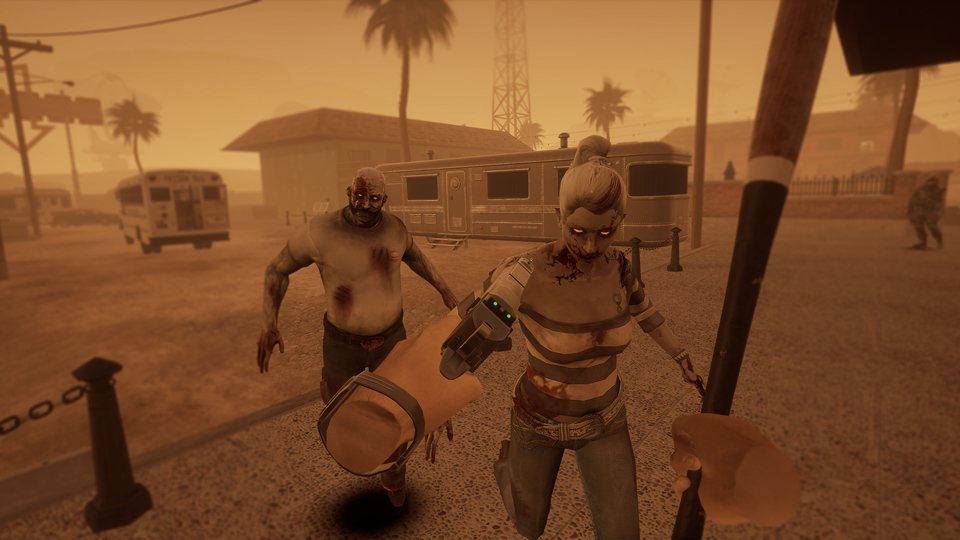 Why do they look so mad!

On the PSVR, Moves are the only option though 3dRudder support is available.  With the rudder, all motion including turning is handled by that peripheral which is fine though I found the movement to be a tad sensitive with no option to adjust that sensitivity.  A bulk of the mechanics in this game shoot for extra levels of immersion such as only allowing a small number of items in your backpack and on your person.  Pistols can be holstered at your side, a light by your head, cell phone near your left shoulder, larger weapons at your chest with ammo close by.  Weapons handle in realistic fashion requiring you to switch off the safety’s, pull back the barrel and unleash with reloads needing you to eject the empty clip, grab a new one from your belt and repeat the process, which in a high pressure situation can lead to some trouble.  As you explore whatever environment you a find yourself in, you’ll have to open doors and drawers or investigate toolboxes and bags in search of valuable weapons, loot or items needed to bypass obstacles.   Until you master the controls, it’s all to easy to drop items on the floor and while the game includes a grab mechanic for distant objects, I found it finicky at best but inoperable most of the time, forcing me to adjust my in-game height to grab those out of reach items as there is no crouch button.  Some doors open with ease while others are awkward or marked as intractable when they aren’t causing unnecessary frustration.  Otherwise this controls like a standard FPS and navigating the stages is relatively easy as it uses the now de facto “Skyrim” Move control scheme.  The controls can be overwhelming at times, but once you are familiar with all the games mechanics, they become comfortable.  Melee weapons play a large role and will wear down and break if used too much and you’ll find some level specific weapons and obstacles such as a Gatling gun or sling shot. 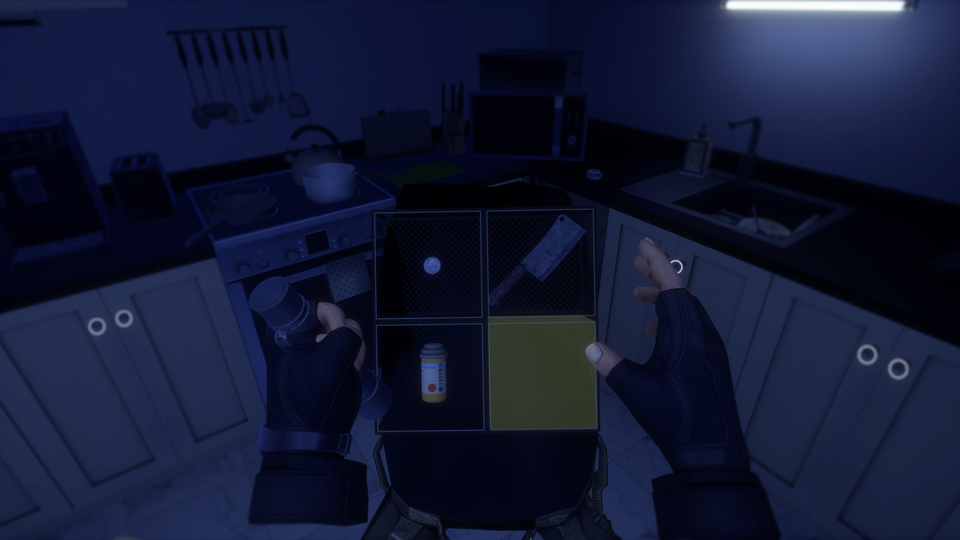 This backpack can’t carry as much as you would think.

3 of the 4 chapters promised are currently available with each once containing its own separate story in this zombie plagued world.  The first has you returning to your apartment waiting for your wife and child to do the same though they won’t make it home before the undead show up.  Some very nice touches like a live TV news broadcast and excellent level designs do give an extra layer of immersion to this game as does some static lighting effects that look decent.   Unfortunately, texture quality can be anywhere from solid to poor with zombie and human animations being much worse as people walk, squat and slide in odd fashion, snapping into animation cycles in a split-second showcasing that more TLC is needed.  Zombies tend to not react to melee impacts unless they fall over, headshots kill the zombie in 1-shot, but the head just disappears ruining every successful beheading and bullet impacts can be questionable as it’s not clear all the time when your bullets connect.  The other 2 stages take you to a desert motel which once again is designed great but does not look impressive with final stage being an elaborate and monstrous house seemingly ripped from the Resident Evil universe full of secrets hidden behind overly elaborate puzzles.  While I appreciate the level of care that went into the level design, the overall lack of quality and polish does make feel like I’m playing the beta version of a game, not the final product.

Coinciding with the mixed visuals is the equally mixed audio and while each campaign is fully voiced by the protagonist you play as, as well as supporting characters, much of the delivery is flat and forced, ruining any emotion behind each story.  When you are spotted by a zombie or they are nearby, a loud action-packed tune kicks in and doesn’t quit unit all the enemies have been dispatched.  When near the undead they elicit constant groans befitting their state and other ambient sounds like wind or sirens in the distance add a little bit of realism to the situation. 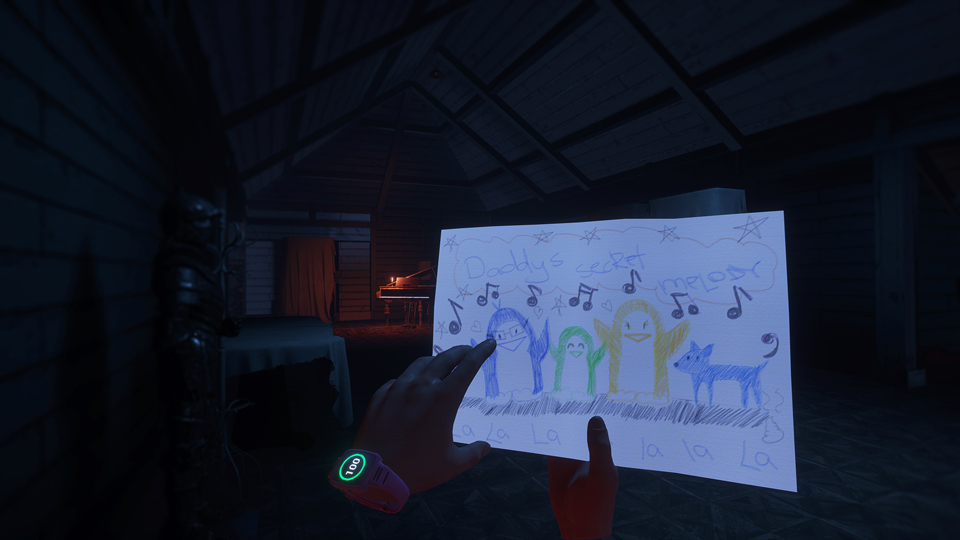 The 3rd stage is loaded with puzzles.

I enjoyed the 1st 2 chapters in this game, despite the presentation issues.  A few jump scares are sprinkled in for good measure and even though you can’t interact with too much in each stage, what you can, along with the stage design does make each mini campaign feel relatively well thought out.  You’ll be scrounging for weapons and dispatching the undead with relative ease, often finding more ammo then you need though unfortunately, this game doesn’t play as smoothly as I would have liked.  Zombies will walk through the environment or get caught up on it and I did too, forcing me to constantly strafe to bypass getting to close to geometry. Picking up anything below waste height is a nightmare and in intense situations, when you need to grab something off the ground, it can be frustrating as your hand tries to grab everything but the item you want.  The final stage has you in the shoes of a young girl, trapped in her house with her zombie parents, which is a great idea, but falls completely flat as the 2 parents constantly get in the way of the solving the over-the-top and plentiful puzzles.  When the mother spots you, she will attempt to run you down, chasing you away from whatever you were working on and even if you lure them away from where you want to be, they find themselves right back in your way fast, artificially extending the length of this chapter.  Also available is a target range where you can get familiar with the games weapons as well as Free Roam mode, which places you back at that desert gas station tasking you with chasing down supply drops and lasting until your rescue chopper arrives.  Besides the last stage, the rest of the levels and free roam mode don’t offer too much in the way of challenge largely due to the fact you can outrun every zombie in the game.  That makes sense as that theoretically be exactly how it would be in the real world, but in this game, it makes many moments of the campaign easy to exploit. 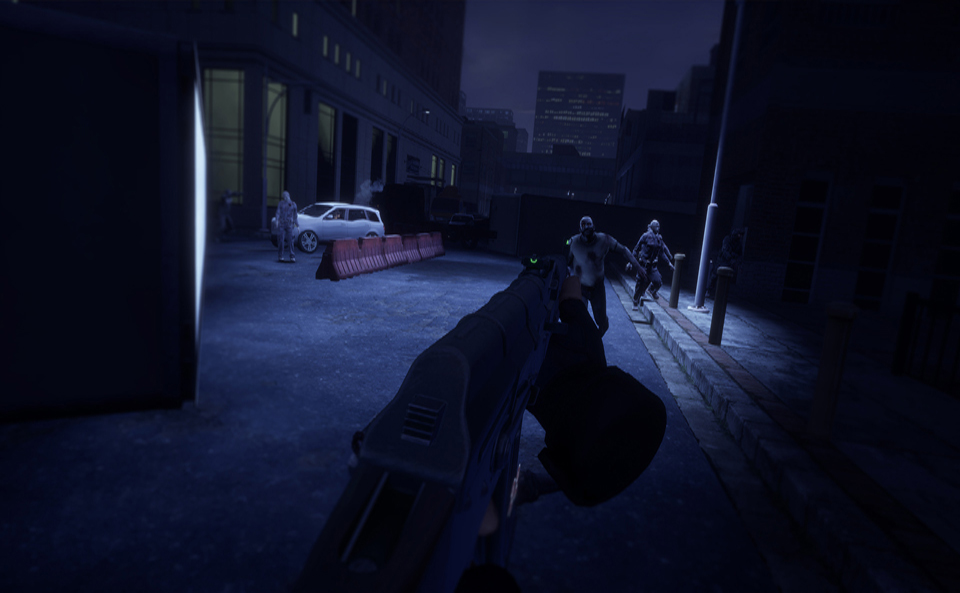 The gun play is this game’s biggest strength.

Contagion VR, as it stands today, feels more like an early access version of a game as opposed to a final product..  Th gun mechanics are sound and my initial impressions of the 1st stage were relatively positive as it was clear the creators of this game are fans of Zombie films, delivering a decent amount of fan service when it comes to that genre.  Unfortunately, the longer I spent in this game, the less I enjoyed my time as I struggled with inventory systems, often grabbing the wrong item or being unable to grab an item at all.  Any intentionally intense encounters were hampered by the games mechanics and whenever I died in the game, it was because I was fumbling with my inventory.  Contagion VR shows promise, but as it stands right now, it’s kind of a mess.

What would I pay? This is $25 US and while I appreciate many aspects of the game, the overall lack of polish, sub-par voice acting, cumbersome inventory system and exploitable gameplay turn this into more a by-the-numbers budget zombie shooter.  There is 1 more stage being added to the game for free, but unless that comes with a large patch to fix the multitude of issues in here, I’d be hard pressed to recommend paying any more then $10 for this.

Monochrome Inc provided The VR Grid with a press code for this title and, regardless of this review, we thank them for that!