We have received a few puzzle games in VR, but 1st person puzzle exclusive games are much more of a rarity.  18 Floors looks to change that by being THE escape room game of all escape room games.  There is apparently a story here, but from what I learned from the game, I couldn’t tell you anything about it.  Suffice to say you are tasked with solving puzzle after puzzle to find the exit to each stage and while I have played a few escape room type games, I have never played one as complex and difficult as this one. 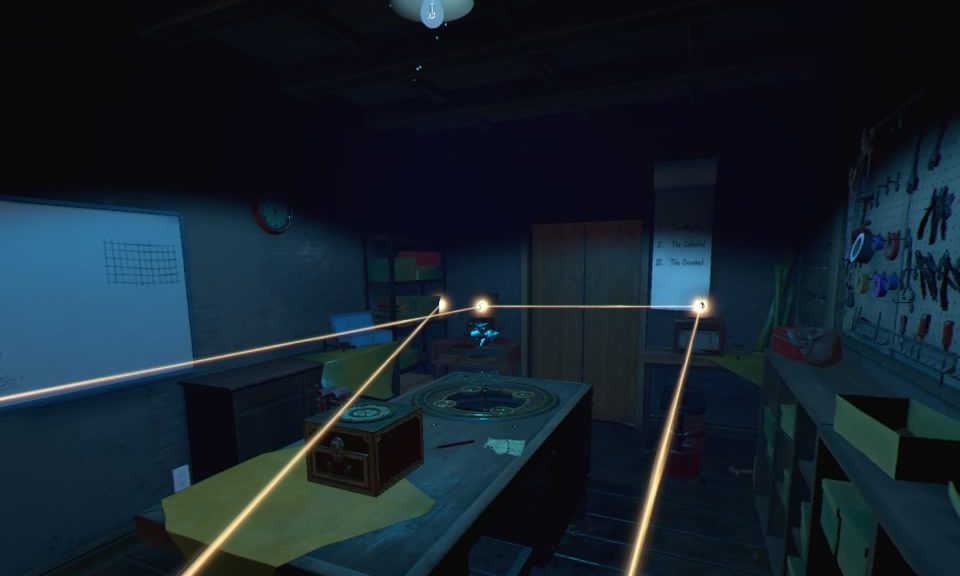 If you get this far…you are doing great!

You need hands to grab stuff which means 2 Move controllers.  Teleportation and 90 degree click-turning are your only options available which is a shame as the game could have benefitted greatly from free motion as you constantly need to make minor adjustments to your position when navigating puzzles.  As you need to pick up items, if you drop them there is thankfully an option to highlight that dropped item and get it back within your grasp.  You’ll be turning keys, spinning dials, using a magnifying glass and host of other tasks that involve manipulating stuff with your hands.  In truth it feels as though this may have been built for headsets with better tracking as some of the motions required are so sensitive, the Move controllers had a really hard time with those finite movments.  That’s about it really, each stage starts you off at an elevator door and you go…find clues, see what you can grab and unravel the seemingly endless amounts of conundrums tossed your way until you finally see those elevator doors open.

18 Floors, for the most part, looks great.  The 2 floors currently available (more on that later) are relatively contained though you will be traveling all over them as you find what you need to solve the next puzzle.  Items carry a lot of detail and the level designs are something to behold.  Currently available are a singular grey room and a train cab, both of which look completely different from the other and I’m looking forward to seeing what the next floors have to offer.  There are a few areas with some rough textures and one visual puzzle requires you to pick a detail out of painting that I could barely make out making that puzzle a bit of a guessing game.  That said, I found the look of this game to more than adequate and besides that one issue, never interfered with the puzzles 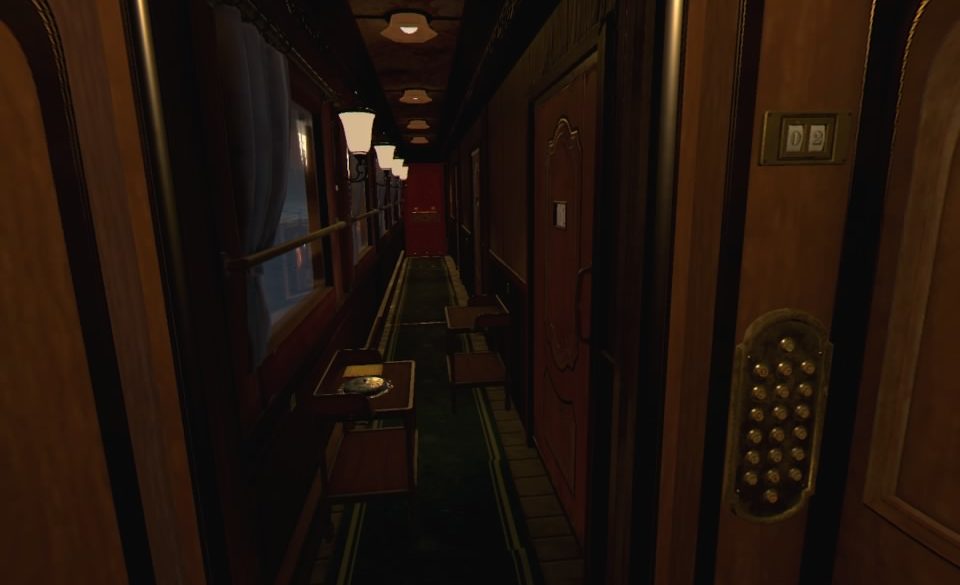 Stage 2..get your thinking cap on!

Realism seems to be the name of the game with the music taking a backseat as it ominously thrums in the background, barely noticeable until the tempo picks up just enough to start boring into your skull.  It’s the kind of music that is unsettling and when you do notice it, you can’t unhear it as plays constantly during each stage.  Everything you can interact with makes its own noise when dropped or used to hit something and while some of the impact noises are a little laughable, I can’t really complain about to much in the audio department.

I can’t go into too much detail about the puzzles available as I don’t want to spoil any of the solutions.  That said I have never had a game challenge me as much as 18 Floors has so far.  Every puzzle is unique and escaping each floor requires you to solve puzzle after puzzle, each of which is completely different from the last keeping your brain working overtime.  I will say if you can touch it, there is ridiculously good chance it’ll be needed to help solve something somewhere so don’t forget about anything you may have touched early on in a puzzle.  Secondly, 18 Floors demands your full attention and unlike puzzle-centric games like Obduction, each stage is so small that the solution needed may only be a few feet away or right in front of your face.  It’s all in the details as they say, and that statement couldn’t be more true here. 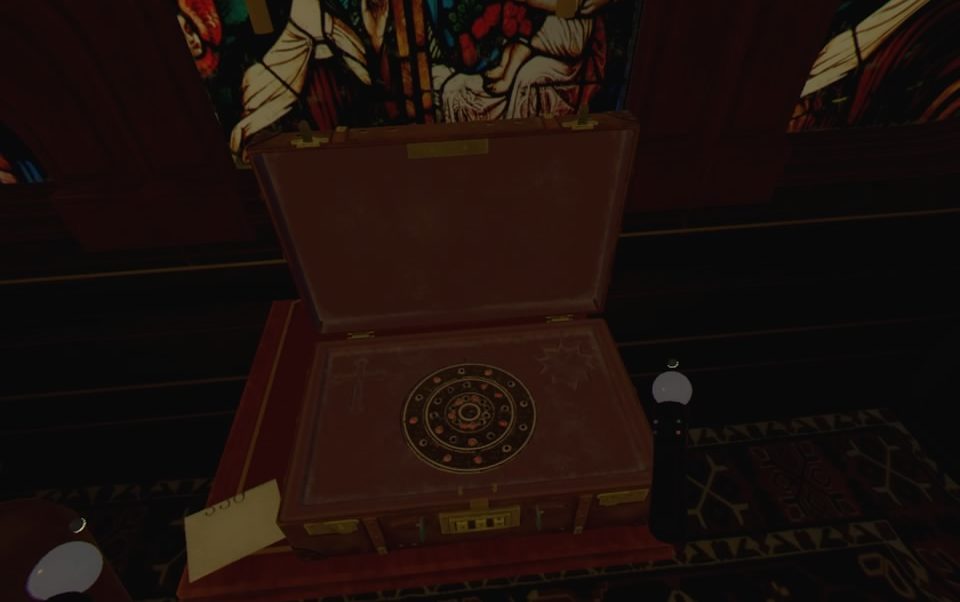 Like most puzzles in the game, I start off not having a clue how they work.

My largest issue with the gameplay is the collision detection as I often lost items I was holding when I teleported near objects or through doorways.   Having your hands in the wrong position when you decide to travel could leave items stuck to the environment in your last position, forcing you to go back to where you were to have that carried item snap back into your hands.  It plagues the entirety of the game and constantly annoyed, though it was never game breaking for myself.  Secondly is that you can only carry one item at a time because if you have 2 items in your hands, teleport gets disabled.  If you need move more then 1 thing you’ll have to travel back and forth multiple times to get what you want where you want it.  Having a backpack or just enabling teleport with items in both hands would greatly alleviate these minor frustrations.

So, while the game is titled 18 Floors and the game description on the store page suggests that all that content is available…it’s not.  With only 2 floors playable as of this review it’s almost laughable that they released it at this time.  There is a story here as well that we only get the tiniest glimpse of, making the store description deceptively inflated.  There is no ETA on the next DLC, whether it’s free or costs money or even if it’s coming at all.  We have seen many episodic games get cut off after only the 1st chapter and with this having such niche appeal, I am very worried that this could suffer a similar fate, which would be a shame as I had some of the most ‘funstrating’ time ever in a game.  Knowing that every puzzle is easily solvable with the items and clues around you is absolutely maddening when you can’t figure it out, but so rewarding when you do.  I spent a couple hours trying to figure out a few of the puzzles and when the solution finally occurred to me (or a redditor guided me in the right direction) I was kicking myself as the answer usually isn’t that difficult. 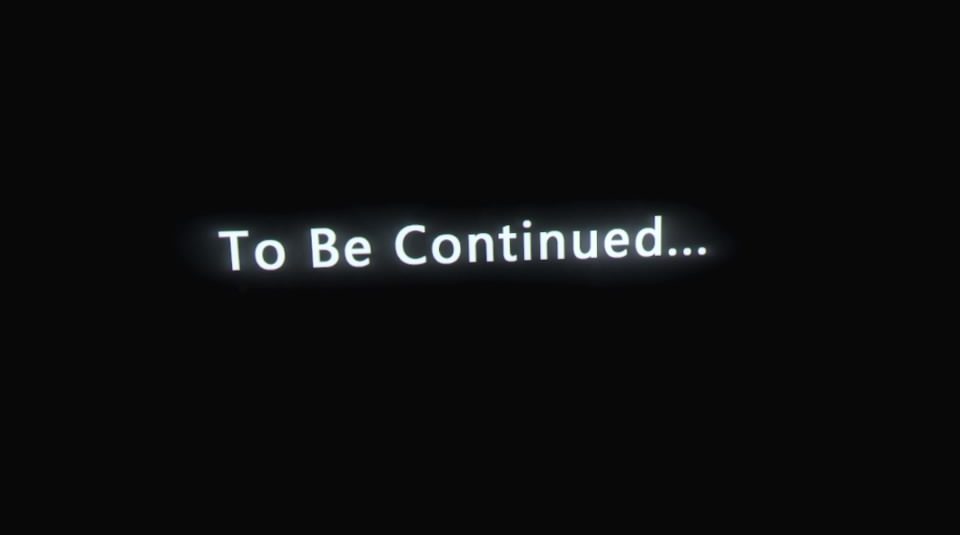 This is how it ends…bleh.

18 Floors contains 2 amazing, complex puzzles that will greatly appeal to those who like putting their brain to task.  With that said, if you dislike puzzles then stay very, very far away from this. There are no clues or hints available, the entire game lives or dies on just how good you are at figuring these enigmas out and patience will be your greatest ally so, if you lack that to, then this will have you rage quitting in no time.  What’s here right now probably took me over 3 hours to complete and when I got the dreaded ‘To be Continued’ screen, I was disheartened as I want to see what the game was going to throw at me next.  This is puzzle solving at its most intricate and surreal, and if you dig that then I can’t recommend this game enough…I just wish it was all here.

What would I pay?  Like I said, I spent 3 hours or more here so the $15 asking price actually isn’t to nuts, but when looked at as a whole, roughly 11% of the game is currently available with no new content announced and while I would assume it will be included for free, that’s just a guess.  Right now, you aren’t playing for any other reason then to challenge yourself, and if that’s enough for you then I say pick this up.