Multiplayer FPS’s are somewhat of a rarity when it comes to VR and while there are a few gems out there, the genre is lacking to say the least, especially when compared to our non-VR counterparts.  As such, when a new one from an established studio is released, it gets some attention as people want a great competitive shooter.  Telefrag VR, from the makers of one of my favorite VR games ever in Detached, is a 1 V 1 shooter that hearkens back to a simpler time where running and gunning in a fast-paced environment was the way we played online. 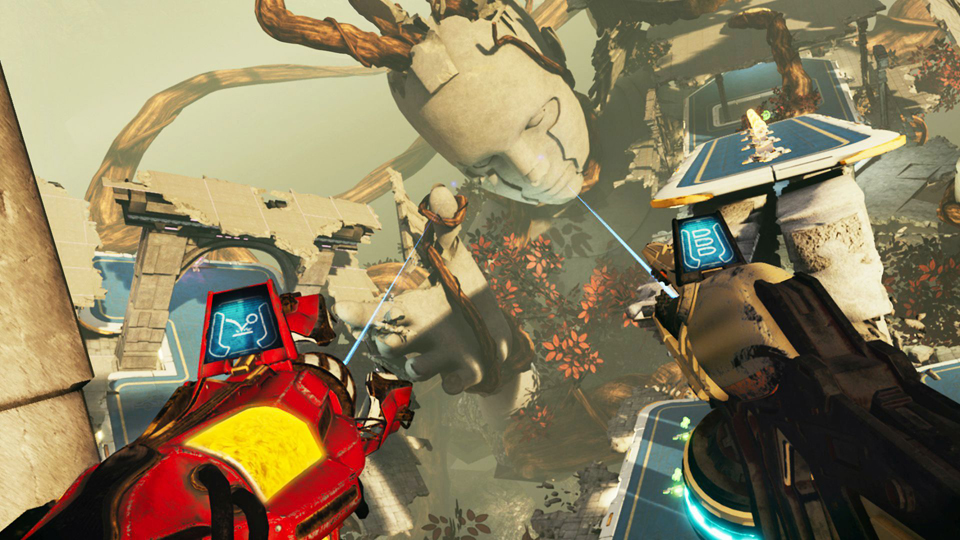 On the PC side, motion controllers or a gamepad are supported with both methods having their pro’s and cons.  Being able to use both arms freely allows for some more impressive shots and getaways while the controller locks your arms in place and forces head tracked shooting, which might sound restrictive, but as you are only facing one foe, it allows you to still stay competitive.  On the PSVR side, the DS4 can also be used as can 2 Move controllers as well as optional support for the 3dRudder, which works with either control type.  Lacking thumb sticks, I found the moves to difficult to use in such a fast-paced game as moving back and forth is assigned to the Move button, while turning and strafing is handled by the face buttons with the triggers firing your weapons.  It just felt like a little too much was crammed into the controllers, though thankfully the 3dRudder alleviates these issues by throwing you feet in the mix and taking over movement.  With that said, I preferred the DS4 for the PSVR and the Touch controllers with my Rift, with thumb sticks making the game way easier to navigate and on the PSVR, you can choose head tracked aiming or DS4 tracking, whichever you prefer. Comfort options are available with the default settings maximizing said comfort though you can customize the game to your liking, allowing for full, blinder free locomotion. 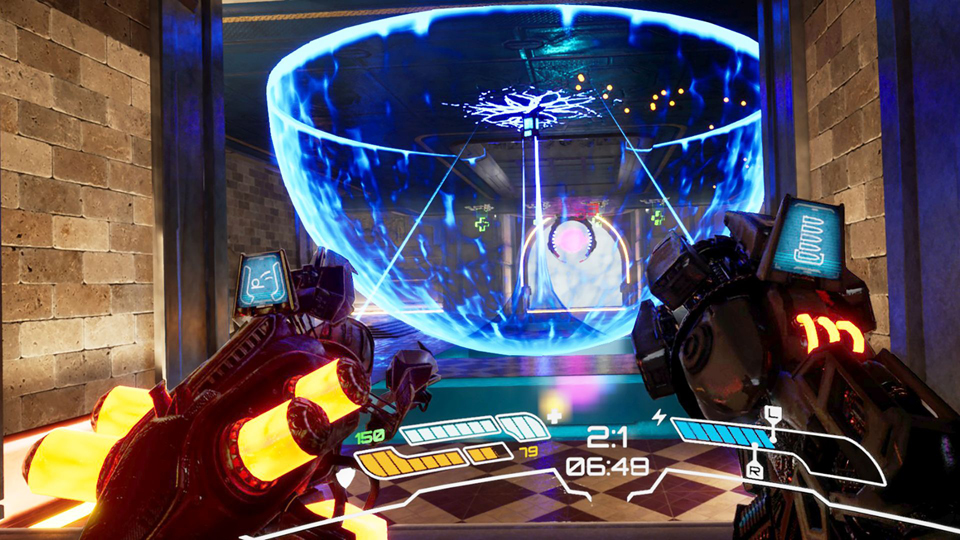 If you can’t tell, he’s on the ceiling right now.

There is only one game type in Telefrag and that’s a 1 v 1 best of 5 death match.  At each games onset you can pick 2 weapons, 1 for each hand, from a list of 5 guns and when you die, you lose those guns forcing you to switch up your arsenal.  You get 2 of each weapon with them coming in traditional FPS forms; machine gun, shot gun, rocket launcher and so on.  Additionally, you also have a teleport function in your guns which is used to navigate around the disjointed maps or even kill your opponent by, you guessed it, telefragging them into oblivion.  The stages actually take place on the floor and ceilings, allowing you to teleport to either surface and flips the stages on their heads. Portals are also scattered around each map that will take you to specific points in each stage as are health and armor power-ups to help recover from your last showdown.  Ammo is infinite so there is no need to worry about that.

Telefrag has a slick art design that looks decent on the PC version and absolutely awful on the PS version, even after a post-launch Pro patch.  The premise of the game is that the Roman Empire never collapsed, and you are a futuristic gladiator fighting in these large arenas.  As such, you’ll see Roman themes throughout the game with giant, sometimes broken, statues in the background while you navigate stages littered with Roman architecture.  It’s a cool looking aesthetic and some of the levels are a wonder to behold though those playing on the PSVR side may be in for a shock as this is easily one of the most blurry games I have ever seen on any headset.  Anti-aliasing is dialed up to 11 making the entire PS version of the game a foggy washed out mess whether you play on the Pro or other PS4 models.  Guns all look great and fire a variety of projectiles and depending on your gun of choice, all of which have 2 fire methods, you can also get a modifier to your teleportation gun that allow you to heal up and damage your foes or teleport instantly.  The PC side looks a lot cleaner removing almost all the blur and making for a way appealing experience. 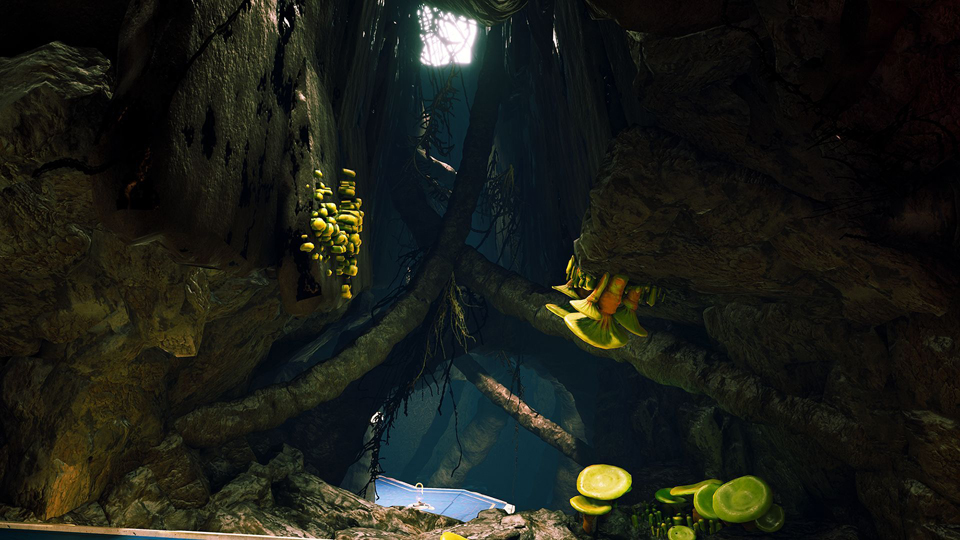 Each level does feel different from the others.

Weapons all sound as they should with typical pew pew laser noises and explosions all doing their job nicely.   When the music isn’t playing you can hear the sounds of the environment like a distant wind or even the faint sounds of your enemy as they fire in the distance with the game having some solid 3D audio.  The music seems to kick in somewhat randomly and is of the generic fast-paced vocaless rock tracks we heard in the 90’s in games like Quake and Unreal and fit’s the action just fine.  There is no option for in-game voice chat currently either, meaning you’ll have to party up with your opponent if you want to have a chat.

So, with most of the technical stuff out off the way, I have a few issues to bring up.  The 1st is the singular 1 v 1 mode which is fun for a few minutes but quickly loses its appeal.   Leaderboards are available to see where you stack up against the competition and really act as the only motivating factor to return to this game on a regular basis. If you can’t find a human opponent, which in my experience is often, then the game supplants bots with customizable difficulty, allowing you to still play the game.  Those bots offer some challenge, but I found that no matter what difficulty you picked, they would get stuck in travel loops, often staying on one section of the map, repeating the same movement patterns over and over until you confronted them.  The default dash movement is annoying, though can thankfully be turned off, with level designs being very, very obtuse.  It’s cool that you can jump on the ceiling and still fight the guy upside down below you, but the overall stage design is awkward more then anything else, making them a little confusing and tough to get your bearings in.  From the get-go you have access to all the games weapons with no way to customize your avatar besides male or female or level up or really do anything besides shoot the other guy.

This guy is toast!

Telefrag VR doesn’t feel like its own game but rather like a tacked-on mode to a much larger game (ie. Farpoint) and misses the mark on what we expect from FPS’s in VR.  The action is frenetic and fun in small doses but the inability to find human players makes this an exercise in killing in AI bots.  Even if human competition were in abundance, I have hard time singing Telefrags’ praises when we have so many more fulfilling multiplayer experiences for our headsets.

What would I pay?  $25 is way too much for this by at least $15, if not more.  I appreciate the look and game play in here, but the lack anything besides a 1 v 1 death match gives me no real reason to revisit this when compared to any other recent multiplayer offerings.  If the idea of a shooter-duel appeals to you then give this a go, but for everyone else, I think this game is just to shallow when compared to its competition.

Anshar  Studios provided The VR Grid with press codes for this title and, regardless of this review, we thank them for that!