You have never played a game quite like Hopalong: The Badlands or to be a little more accurate, you have played a ton of games like Hopalong: The Badlands, but never with this kind of control.  Hopalong is a first-person shooter taking place in the old west.  As the new Sheriff in Town it’s up you to clean up the riff raff plaguing the countryside in the form of the Dynamite Gang, a ruthless band of outlaw’s hell bent on killing you by any means necessary.   It’s a relatively stock shooter with one very unique movement mechanic. 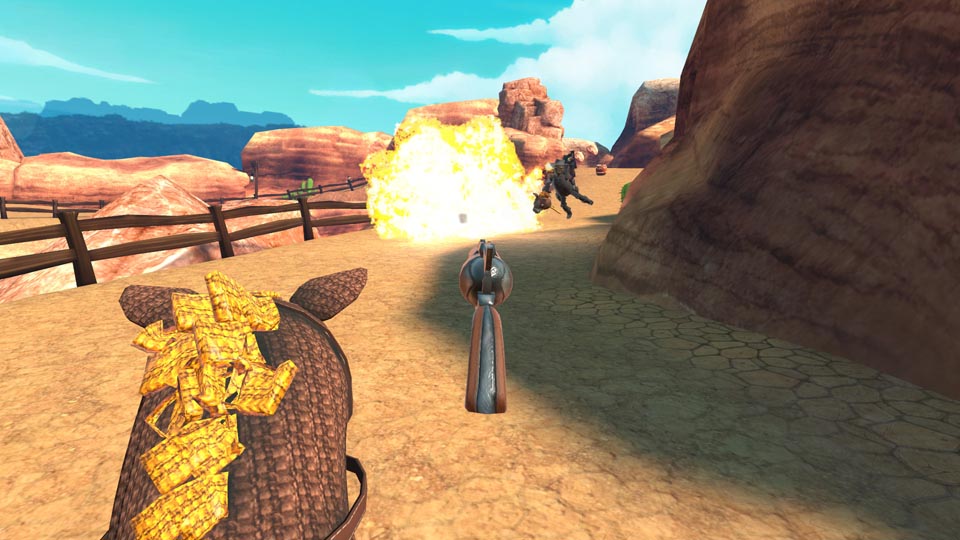 That mechanic is how you navigate the levels.  There is no teleportation or mapped buttons on either Move control to move around.  Instead you hold in your hand a stick horse (think a broom handle with a life sized plush horse head on the end of it) and in order to move in any direction you need to move that horse in pseudo up and down and forward/backward movement.  The slower or faster you perform that motion, the slower or faster you will move.  It’s a silly way to navigate in any game, but it works quite nicely and only after a few minutes was I totally used to this movement system.     Your other hand holds your pistol which is reloaded by moving the gun down to your hip, whereupon a reload sound signifies a successful rearmament.  The name of the game is to kill all the members of the dynamite, who also ride stick-horses, through 3 levels broken up by multiple smaller stages.  You can only click-turn in the PSVR version of the game, which is unfortunate as smooth turning is available on the PC headsets.  Scattered around each stage are hidden stars which can be collected for bragging rights and as you progress you unlock more weapons and horses with improved abilities.  Should you lose health you can replenish at any watering trough scattered around each stage, though once used up they don’t refill. 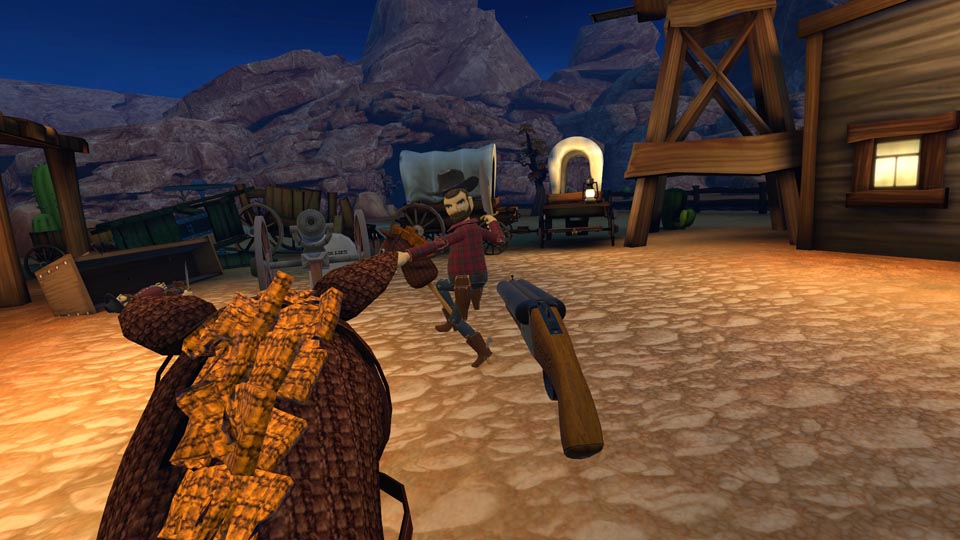 Him and stupid horse are about to get lit up!

Hopalong at times looks really great and other times…not so much.  The 3 stages all carry a different theme and contain a tonne of detail making for some visually impressive stages.  Whether your roaming through rock laden deserts, dark mines, along high cliffs or in a town the environments on more than a few occasions had me just stopping to take in the sights.   There is a cartoonish look to the game, but it lends itself to the lower resolution of the VR headsets.  The character models don’t look quite as good as they carry an almost boxy look akin to what you would see in cowboy marionette but given the lighter nature of the game, it’s not the biggest issue.

It wouldn’t be an Old west game with a string guitar-centric soundtrack and that’s here throughout the entirety of the game and perfectly blends into the background never becoming intrusive.  What is amusing is the voicework on the Dynamite Gang members, which echo’s what we heard in “Mervils’.  There is no 3D audio so when a villain says something, it sounds like they are right next to you and thanks to some slightly budget recordings, it sounds like they may be talking to you through a phone connection.  That said, they can be hilarious at times as they spout out constant one-liners about killing you to regretting the choices they made in life.  The charm one me over, but the sprite voices, to me, were the most telling sign of the games indie roots. 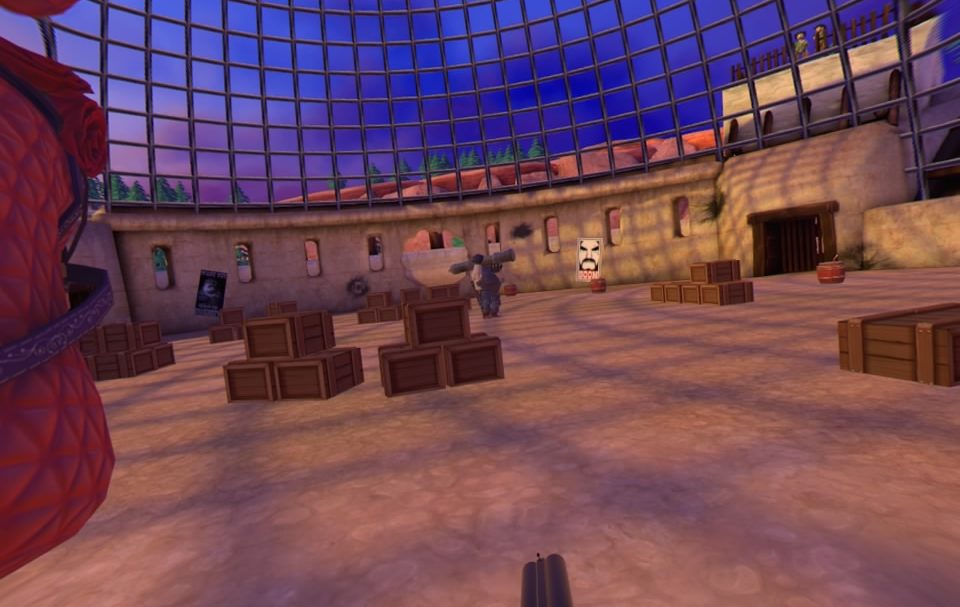 The bosses are little harder then the average cannon Fodder.

You can play through each stage on Easy, Medium or Hard mode with Normal offering some decent challenge and hard being a next to insane difficulty.  Scattered throughout the campaign are boss battles that may require a little more than just shooting them in the face to win.  While the maps are fairly linear, there are still plenty of paths and hidden areas to discover which typically yield a hidden star.  Select weapons found during the game also allow access to specific areas. Depending upon the difficulty, the campaign could run anywhere from a couple hours to 5 or more and offers much more content then I initially expected from a title of this type.

Its not all great and while the movement mechanic is is relatively intuitive, on a fee occasions I found it to be cumbersome, especially when combined with click-turning and whenever I died, it was typically due to a botched turn while I was waving my controller to move.  If you die int he game as well, you must restart the last level you were playing from the beginning making death feel very unfair most of the time.  A checkpoint system feels missed, especially when death occurs during a final battle in a stage and forcing us to replay the entire stage just feels like unnecessary punishment.  Gunplay also seemed a bit spotty at times, especially when on the move and I often shots that clearly landed, not being detected by the game.  Also, on either side of you are arrows pointing which way the camera is and are way to large and obtrusive, obstructing your vision and forcing more click-turns than necessary.  Lastly is the mine stages, which can be way to dark at times causing me to take damage from foes I could barely see or just having difficulty just navigating through them. 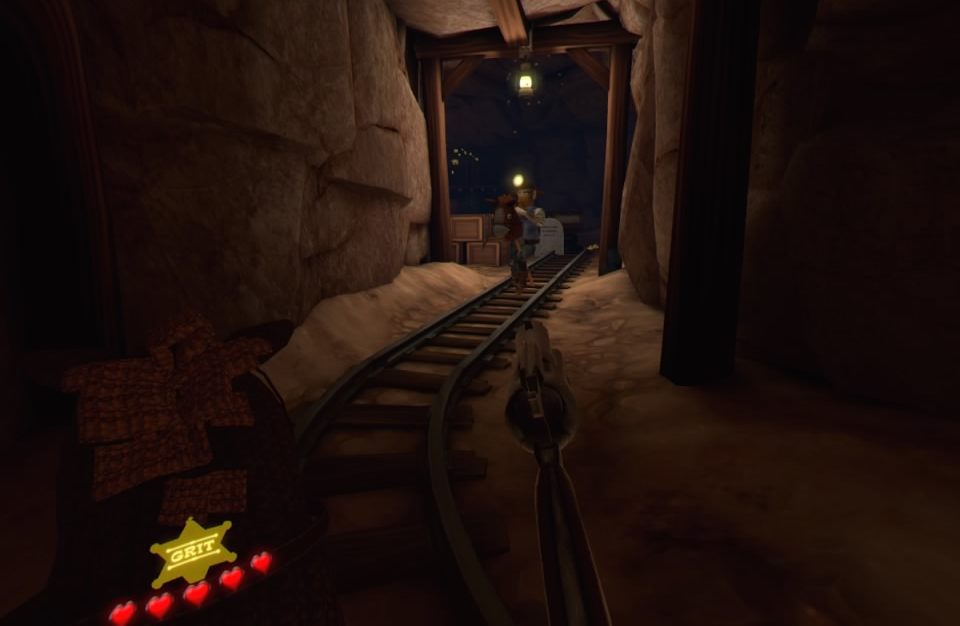 He’s coming right for us!

Hopalong: The Badlands is a unique FPS with a unique movement system that that works way more then it doesn’t.  The light-hearted nature of the riding a stick-horse combined with the comedic tones voice acting had me admiring this game of more then a few occasions and the wild west vistas are times, something to behold.  It’s a full campaign with some satisfying combat and enough hidden areas and secrets to keep you entertained for way longer then you might think.

What would I pay?  I think $20 is more then fair and while I initially wrote off the opening stages as being a bit shallow, the rest of the game delivers some fun and satisfying gameplay, all while riding on a stick-horse…which is hilarious!

From  The Future LLC provided The VR Grid with a review code for this title and, regardless of this review, we thank them for that!