In the middle of 2021 and spending almost all of game time in a headset, I need to admit that I’m getting fatigued by the lack of AAA games in VR and I’m starting miss games like Uncharted, Gears of War or God of War and the level of scale and polish that comes with those bigger studio titles.  So, while perusing my collection of VR games I stumbled across Hellblade: Senua’s Sacrifice, an almost 4-year-old 3rd person puzzle brawler that addresses issues of psychosis but set in a disturbing version of Norse mythology where you, as Senua, must journey through the afterlife and hell itself in an attempt to bring back her lover from the grave and what ensues is like nothing else I have played before…mostly. 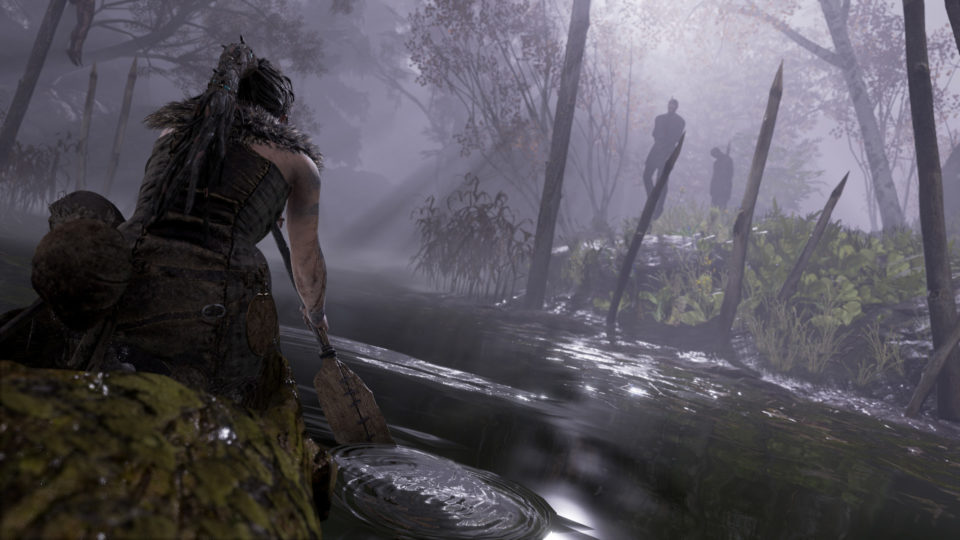 Welcome to the road to hell.

This plays identically to the flat version with the default view for the game being behind and just above Senua.  Due to that fact, you’re going to need a gamepad or keyboard and mouse(bleh) to play this and while you can play with your motion controls, the button placement is wonky and even if you decide to use custom keys, having a controller in each hand creates an unnatural disconnect with the game as it was clearly designed for a 2-handed controller in mind.  As far as the VR controls go, you can only move the camera horizontally with the thumbstick and any vertical (and horizontal) movement being mapped to your headset.  It works well enough though I wouldn’t have minded a little more control over the viewing angle, but it honestly never got in my way.  There are 2 additional viewing options listed as ‘experimental’ in the settings; ‘Giant mode’ brings in the camera low and up close to Senua and makes things more cinematic, but I found it too be to close making the scale to large and unrealistic.  The 2nd is “Tabletop Mode” which turns Senua tiny as the camera pulls back allowing you to view a much larger area and while it is slick to see the levels laid out in this way, I found it hampered the gameplay and thus stuck with the default view which can be offset in the options.  If you aren’t walking or jogging through a stage, you’ll be solving environmental puzzles or in combat which is handled ‘Assassins Creed’ style with block, parry, dodge and attack options that will need to be balanced depending upon the enemies you encounter.  Puzzles on the other hand occur when you reach doors blocked by runes that need to be discovered by finding those symbols somewhere in the environment and using your focus ability to unlock them, allowing you to proceed with some very clever illusion puzzles sprinkled in to add to that challenge.  Other stage specific elements (more on that in a bit) pop up throughout the 10-hour linear campaign and when looked as a whole, makes for a harrowing, intense, challenging & epic journey through dark and disturbing Norse mythos. 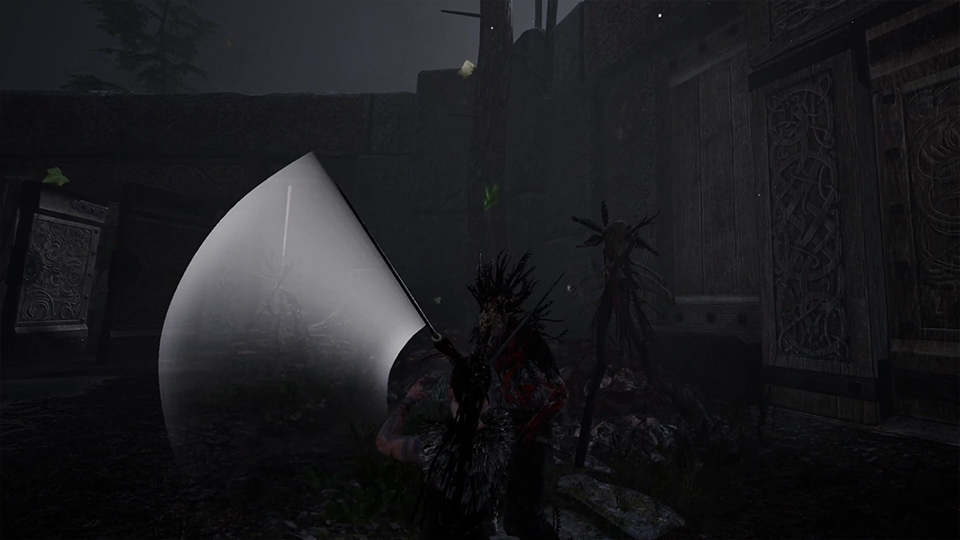 Where Hellblade shines is in the presentation which rivals some of the best AAA games we have seen in or out of VR.   Environments are fully realized with an attention to detail we rarely see in VR, making for an awestriking campaign from beginning to end.  You’ll have Senua traversing bogs, forests, caves, beaches, tombs and many more environments with many of them often littered with the dead.  It’s a dark and borderline disturbing game as Senua ventures deeper and deeper into the depths of hell and into her own madness.  Character models are rife with immaculate details and the enemies you face even more so as they assume the form of undead soldiers and demigods wearing a variety of skulls and forms from the humanoid to the much more surreal.  I really can’t stress just how gorgeous Hellblade is, even despite the rather dull brown and grew color palette, as every moment in here just pops.  Making things even better is the ridiculous draw distance that makes monolithic structures in the distance look realistically huge, especially as you make your way towards them without nary a loading screen except in between stages.  Cut scenes will happen as you trigger them, sometimes being viewable in full VR goodness though are more often cut down to cinematic view with a nice little VR to non-VR transition that eased me into each view screen offering.  When these occurred, it made sense as there is a very intentional story being told and to have the player miss key moments because they were just looking around is just silly.  Additionally, some of these scenes use real-world actors on top of the rendered models and as these were obviously not filmed in 3D, putting those into a 3D cutscene would really ruin that presentation.  I honestly could go on and on about how great this game looks from the falling rain, pitch black monster filled mazes, fire covered demons and even the horrors of hell itself, but I can’t do those visuals justice and even viewing these flat wouldn’t have the same effect as in VR but suffice to say, I was very impressed. 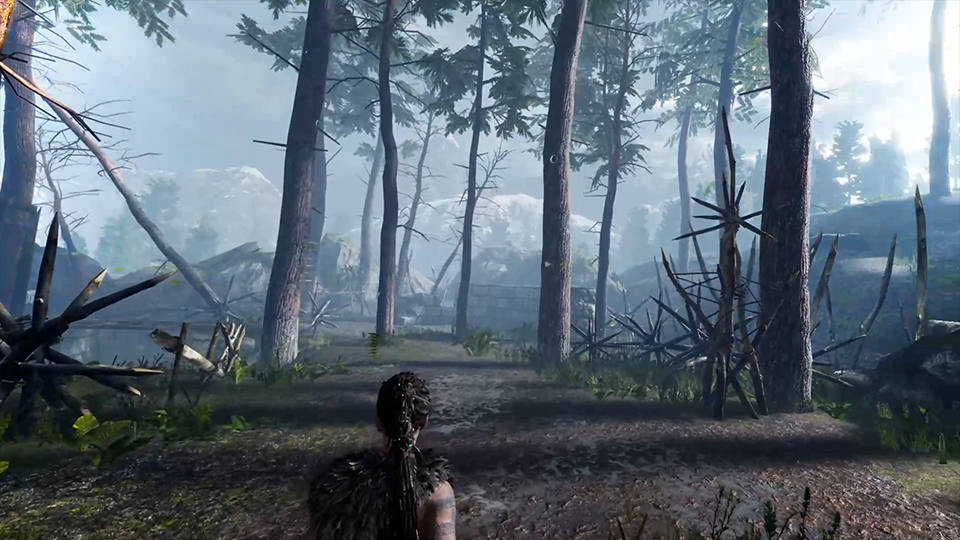 Excellent visuals need excellent audio and of course, this has that in spades with sound effects that are point and an epic Celtic soundtrack that is mixed with more modern music stylings and it all works wonderfully.  Where Hellblade stands above the rest though are the voices Senua hears in her head.  Headphones are an absolute must here as the binaural audio lends itself soooooo well to VR.  This may not be a 1st person VR adventure, but it feels like it as you share Senua’s emotional turmoil.  Senua, if you didn’t know, is a victim of psychosis and often falls prey to visions that may or may not be real but nonetheless still carry with them some very impactful moments.  While those voices are rarely silent, they never interfere with the game and even help you during combat, warning you of incoming attacks off screen, though when not in combat they can be disorienting as they often contradict themselves or even have conversations with and without Senua that really had me empathizing with her madness and what she goes through during the story and even here life before the game’s onset. 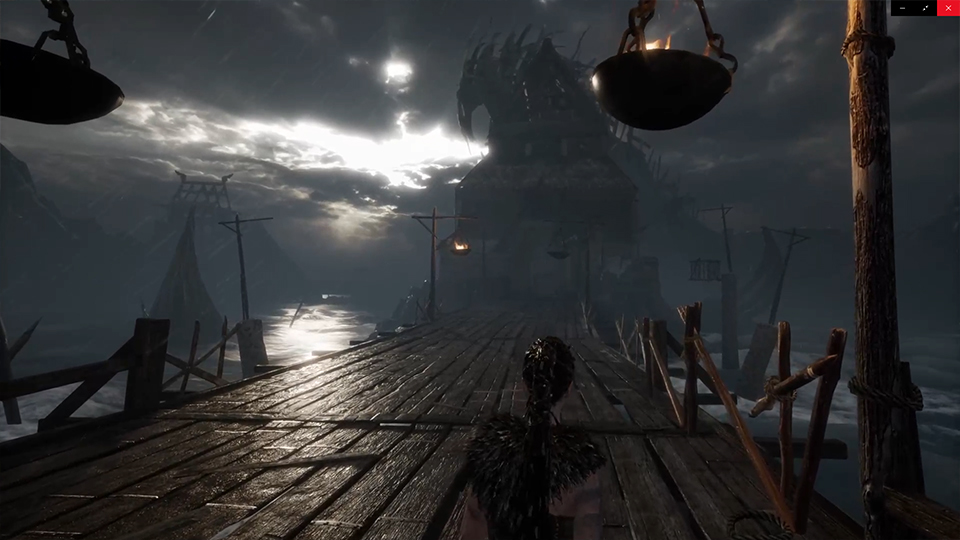 The scope & scale of some of these stages is impressive.

Hellblade is by no means a perfect game though any issues are minor at worst and can be ignored in favor of just seeing what that game throws at you next.  You will need a beefy PC rig for this as even the minimum recommended requirements will have the game chugging at times to render everything happening around you.  There are graphical options to mess around with and with my 2070 super I found the experience relatively smooth on the high settings save for the texture pop-in that occurs throughout the game and is especially noticeable in the larger areas as cliff side textures popped in before my eyes and other finer details just showed up as I got closer to them.  There are also some clipping issues made more noticeable thanks to VR as you are just closer to the action but given the scope of the game is also forgivable.   There is no save option and instead you just hit checkpoints and can quit at anytime though depending on where that last checkpoint was, you may be repeating some battles or smaller sections and I found it’s best to quit after cut-scenes to ensure your not treading in your own footsteps.  Additional, etched stones are found on your travels and tell some epic Norse stories that may bear some similarities to Senua’s plight though are often hidden in any stage and may require a little exploration to uncover but are really worth seeking out.  Combat can also become a tad tedious during the ‘gauntlet’ sections as I found myself using the same evade and attack tactic that worked on almost every foe you face, though the smaller encounters and boss battles were oftentimes a nice change of pace.  Lastly would be a developer’s diary of sorts that should be watched after you have completed the game that details their journey to make a game that addresses mental illness like no medium has ever done before. 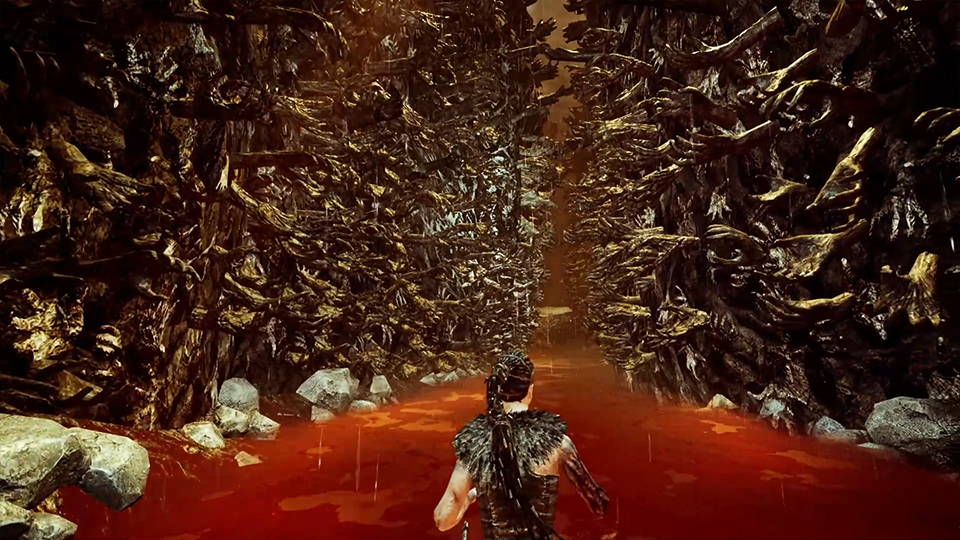 It’s a nice to place to visit, but I wouldn’t want to live there.

So, despite some very minor misgiving, Hellblade was an absolute blast of fresh air and while I probably should have played this sooner, I’m so glad I got to play it during 2021 when our VR experiences are tending to come in ‘Quest sized’ portions.  It feels AAA, it looks AAA and offers up a campaign unlike anything else available in VR and I was enthralled from beginning to end.  I found the illusion puzzles to be both clever and rewarding with the overall story never letting up and Melina Juergens as Senua delivers one of the most emotional performances I have ever seen/experienced.  If you are looking for a VR game that challenges the medium by not being in 1st person, yet still offers an immersive and engaging action-packed campaign than don’t look past this as it’s arguably one of the best games you can play in a headset.

What would I pay? This goes for $30 on steam and it’s easily worth that price but look around and you can find it for cheaper.  This is a must play VR title and shows that the medium can be used for more than just job sims and shooters.  More non-VR franchises should take note of Hellblade as it’s an amazing flat game made better by being in a headset and proof that translating some of the best non-VR games is not only doable but will benefit the way people consume those games.