There have only been a few platformers released in VR that are worth any mention.  It’s a genre that seems to be tough to implement in VR without under utilizing the tech or risking a new mechanic which may just not work that well.  Light Tracer falls somewhere in the middle of those two areas with solid platforming action that is hampered by the chosen control scheme and some frustrating gameplay choices.  That’s not to say it’s busted, because it’s not and is by far Oasis Games best PSVR effort so far. 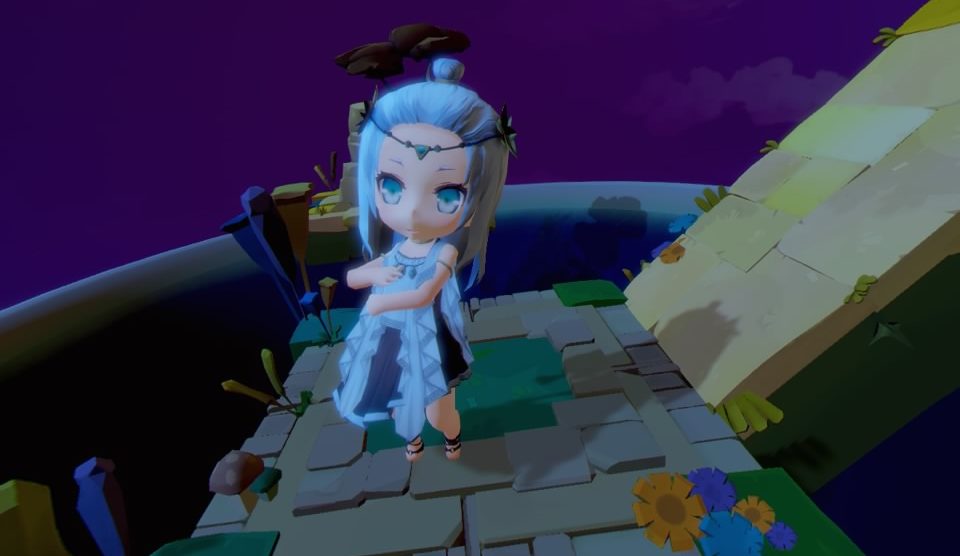 Meet your princess protagonist…I have no idea what here name is.

The controls are the stand out in conversation and play very much like a point and click/drag adventure.  Utilizing only the move controllers, a bold choice considering the genre, your left hand is free to manipulate the environment while your right carries a wand.  This wand issues a beam of light which you direct in front of a little princess and guide her to that spot.  That sounds simple enough, but the stage design throws a few obstacles in your way.  Unlike most platformers, this is built upward in a sort of a square tower so your best view of the action is usually top down.  Your free hand is used to maneuver your view, pulling in for a closer look or pushing back, which works, but you often end up moving up or down in that same motion, forcing a constant position correction to get where you wanted to be in the first place.  The square shaped levels are mainly hollow in the middle, meaning that most of the action takes place on the outside of the tower on a narrow path.  The problem with the narrow path is that the way you guide the girl can be tricky, especially when moving the stage for a better vantage point and, because of the top down view which works best, your beam may collide with a closer platform higher up.  In that instance, the princess will still try and walk, in a direct line, to that point, usually leading her to a deadly fall.  The bottom line here is that though simple in execution, navigation becomes a lot more cumbersome that it initially appears and takes a lot of time to master.

Besides manipulating your view, your left hand can also move certain platforms horizontally or vertically and this element makes some stages act more like puzzles where you need to figure out exactly how to get your girl from point ‘A’ to ‘B’.  Throw in the ability to jump and some combat as well and the game breeds a lot of frustration as you fight just to turn the girl in the right direction as an enemy looms in.   With all that said, I did become somewhat comfortable with control scheme after awhile, and though death still plagued me throughout my entire playthrough, I was able to persevere and press on. 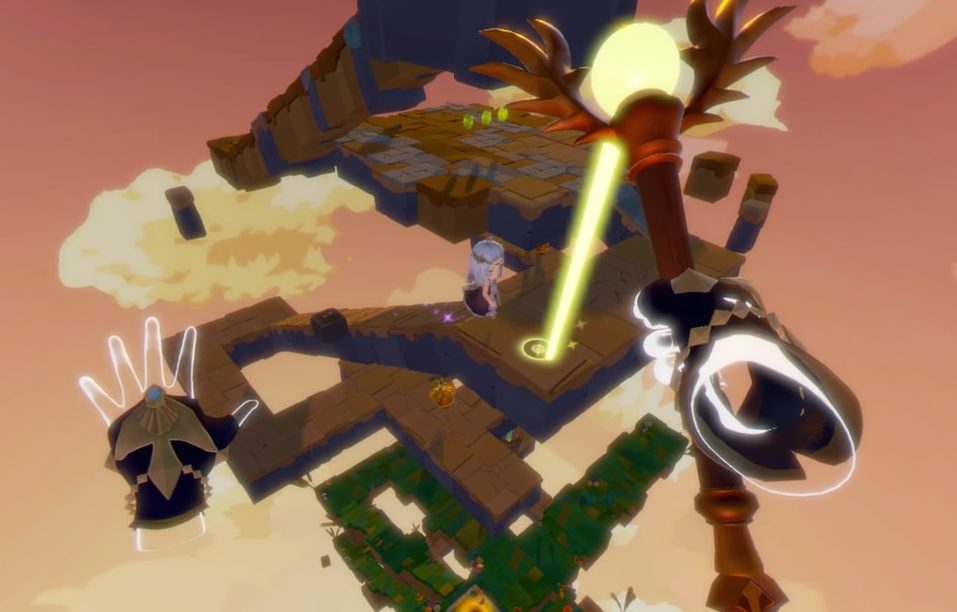 Your typical view of the action

The Tower of Belbatis contains 8 ‘levels’ with each broken up into 5 stages and you must guide the princess up and up and…up.  She says early on that she is on a mission to meet the gods and this tower can get here there.  After a brief tutorial stage, you are left to your own devices and begin to ascend the tower.  Early stages include simple tasks like jumping over gaps and platform manipulation.  As you progress, each world introduces to new obstacles to circumvent; statues throw rocks, spikes pop up at certain points, swithces need to be hit and then there is the enemies.

The only enemies you see in the first few worlds are the bosses, and they must be defeated by avoiding or reflecting their attacks back at them.  Once you get the sword, so to are you introduced to smaller enemies peppering the levels, each with their own attack strategies.  Some remain stationary, follow pre-set paths, pop up and seek you out or shoot you from a distance.  Each enemy’s introduction usually leads to death upon realizing exactly how they come at you and, typical of almost any aspect of the game, trial and error will get you through. 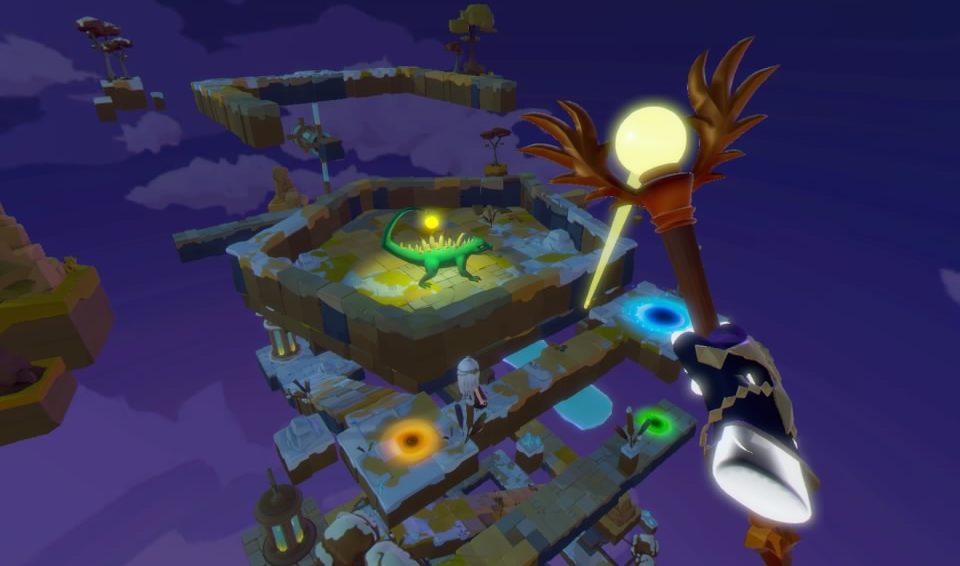 Light Tracer looks good utilizing a simple, cartoonish art style.  Pulling your view in for a closer look reveals more subtle details, though for the most part the game is best played from a distance where you can see what’s coming up next.  Each of the 8 worlds is its own contained theme offering traditional tropes like winter stages, green lands and space with environmental variables.  Viewing the tower below you is cool site showing where you have come from and the new stages don’t appear until finish the current one.  It’s a cutesy art style for sure, but looks quite polished and I really had no issues other than it simplistic nature.

I found the games audio to be…annoying.  The musical tracks, and there are a few of them, seem to be experimental mixing of genres that sound okay and fit the game initially, but wear out their welcome fast.  If you thought to yourself ‘I wonder what J-pop mixed with country in the style of a show tune might sound like’ than your answer lies here.  The sound effects as well also wear out there welcome, specifically from the girl, who’s deathly screams at every fall are initially amusing, but after about the 200th time, I wish she would fall in silence.  Beside that though, enemies make their own sounds as do environmental variables and for the most part fit the game nicely. 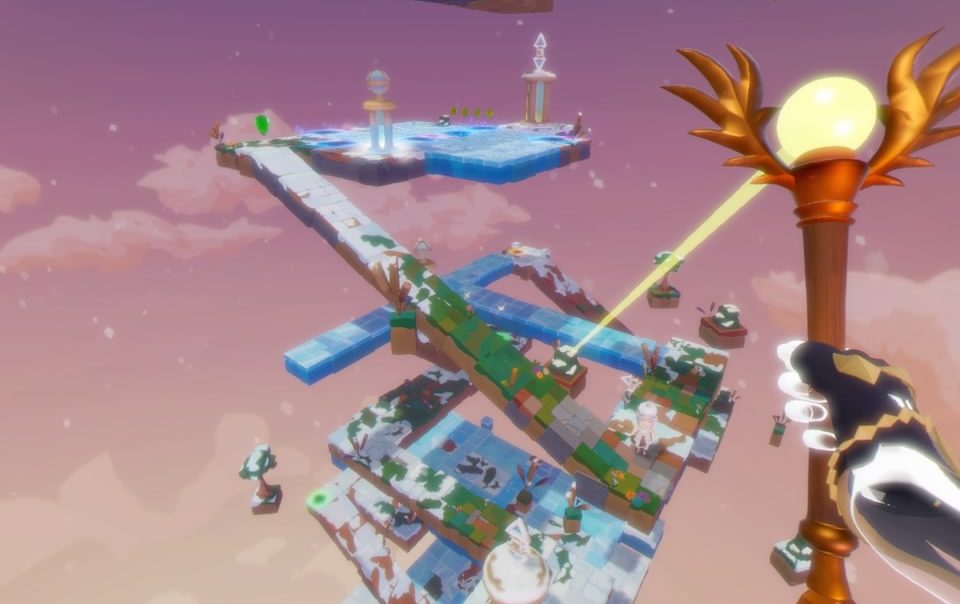 The content here is commendable with each world taking 20 to 30 minutes, and maybe longer, to complete not including the boss battles which could take a fair amount of time as well.  With that said, I could not beat the game in one sitting for a few reasons.  Though each world offers new variables to contest, the core gameplay remains the same and given all the frustrations mentioned above, it can get grating…especially when combined with the music.  The boss battles as well can be insanely frustrating with little to no instruction given on how to defeat them.  That’s not necessarily a bad thing as figuring these strategies out is its own reward, but some bosses don’t react to attacks, which had me questioning if I was doing the right thing on more than one occasion.  Thankfully the game gives you infinite lives so death only results in a restart to the last checkpoint.  Lastly, manipulating the levels gets tiring on the arms and hands and I just needed a few breaks. 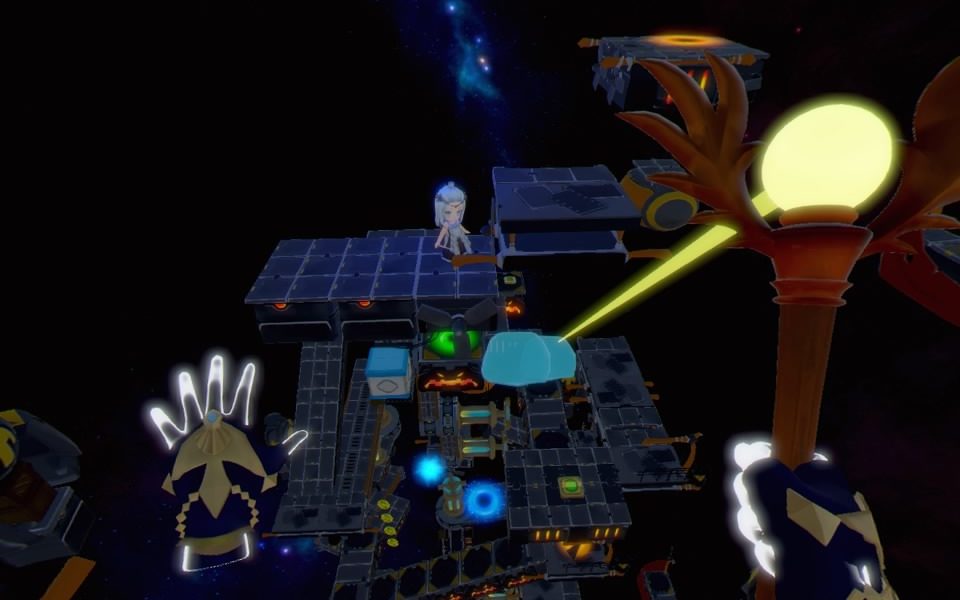 The latter levels get crazy complex in their puzzle solving…you have been warned!

All my whining’s and moaning’s about the downsides of this game aside, this is still an alright platformer.  While the controls can be cumbersome at times, overall, they still work.  The game contains a fair bit of content and though I wouldn’t recommend playing it all at one time, I’d still recommend play it…if your looking for some platforming action.  This is a step in in the right direction for the genre and while no where near perfect, offers up some and fun and challenging gameplay.

What would I pay? $14.99 is a good price for what’s offered up here.  There is hours of content and some decent, albeit flawed, mechanics.  If your looking for a platformer in VR, then you might be surprised by this.