*This review has been updated to reflect the changes implemented in the V. 1.02 patch which affected comfort settings and the control schemes available at launch*

Golem made it’s 1st appearance all the way back in December 2015 and while many people assumed that this would be a PSVR launch title or at least show up close to launch, it soon became apparent after being removed from the store and suffering multiple delays that this would be a game long in development.  Well, here we are almost 4 years after the initial trailer release that we get a game that many have dismissed as nothing more then vaporware while others have been cautiously awaiting it’s release and I’m happy to say that Golem delivers an unparalleled VR experience marred by early VR issues.  To quickly summarize the story, you control Golems, large stone beings, and must navigate through the ruins of an ancient city populated by evil golems that must be vanquished to get to city’s core for reasons I won’t ruin here. 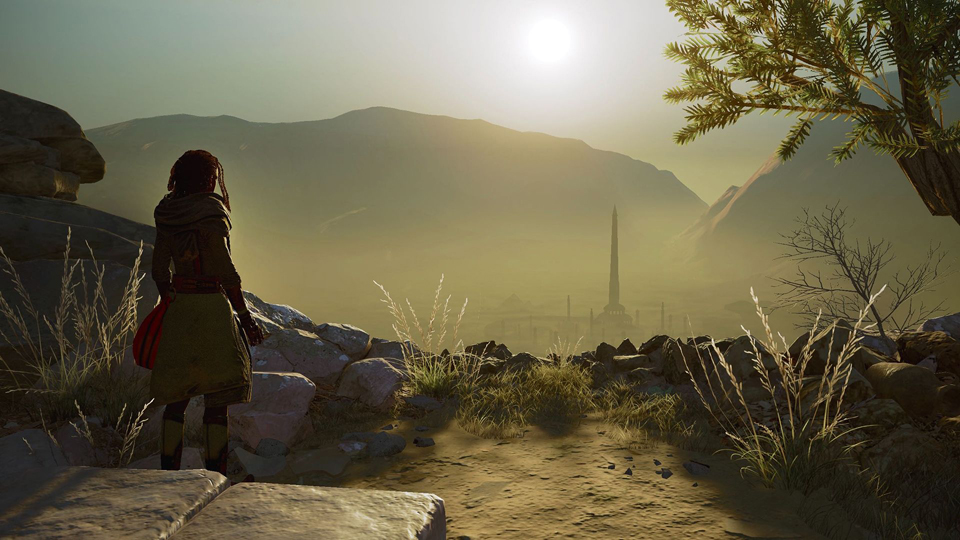 There are 2 control options available, the first using a singular Move controller with head tracking used to navigate your surroundings.  Unlike almost any other VR title utilizing the Moves, Golem opts for an unorthodox way to move around by leaning your head toward the camera to move forward and pulling back to slow down or reverse while turning your head forces your golem to automatically start turning in the direction you are looking with options to turn using the buttons on the Move controller.  Unfortunately, click-turning is the only available option currently with either control method though you can adjust the degree of the turn and whether you want the turn to blink or animate smoothly.  The 2nd method utilizes the Ds4 or PS3 nav as a 2nd controller, using the thumb stick instead of the head-tracking to move forwards, backwards and strafe.   A post-launch patch refined this control method allowing for the game to play like at traditional VR melee combat game and is the way I recommend playing.  The 2nd major mechanic you need to master is the combat which plays very similar to games like Asgard’s Wrath and Vader Immortal with you having to block and parry your opponents, waiting for the right moment to strike, which will be highlighted on the enemy golems body.  Enemy golems attack high and low, slow and fast but do attack using repetitious behaviours so pay attention to their attack patterns or you’ll suffer damage or death.

Where Golem gets complicated is that every time you die, the city resets so enemies you have killed arise and must be disposed of again though each time you die or choose to reset the city you can equip your next golem with stones that provide different buffs, weapons with differing range and damage, and masks.  Many Golems you face wear masks that are needed to open doors that allow access to locked areas of the city.  The catch here is that every time the game resets, whether you choose to or die, all the items carried by the Golem you were controlling become lost, possibly forcing you to repeat encounters to get the items necessary to unlock the next path in the game.  Masks offer their own advantages against other Golems in different masks with the final mechanic in the game being loot finding as scattered around this city is a variety of loot which, as far as I can tell, doesn’t give you anything other then a purpose to explore every nook and cranny in this open world. 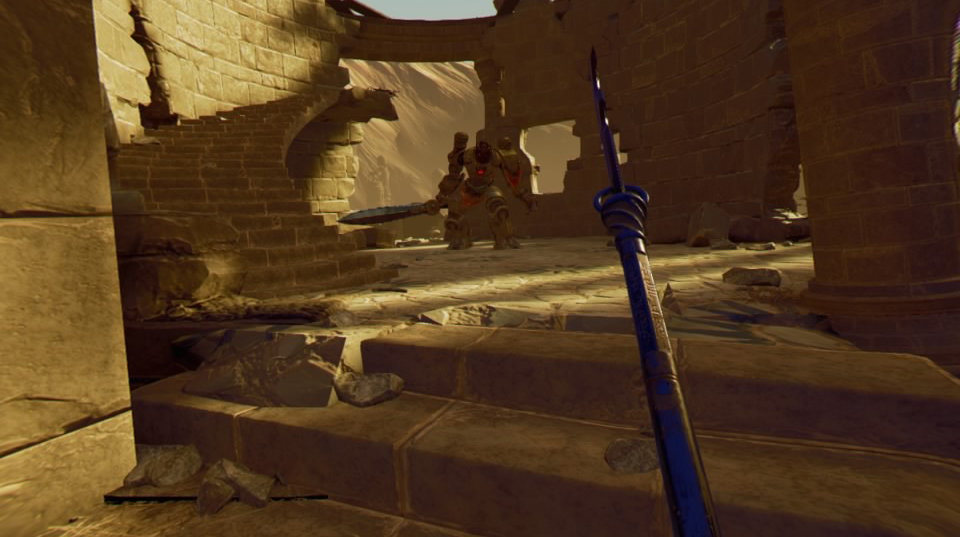 Every fight is a challenge.

Above anything else, Golems presentation is outstanding and is easily one of the best-looking VR games I have ever seen on any headset.  The initial 15 minutes of the game are very narrative heavy with you passively sitting by as events unfold around you.  The tale end of the prologue establishes the reasons and methods for which you become a controller of Golems with your tutorial mission having you inhabit a small doll in your bedroom.  In this mode, one which you experience again during the campaign you wander underneath your house and through tunnels in the ground, fending off bugs as the game teaches you many of the core mechanics.  Soon enough you can control Golems, large gargantuan machines that inhabit this forbidden city.  The city is amazing to behold and even though everything has a sort of arid look and feel, the level of detail is stunning at times from the smallest of broken items to huge structures and everything in between.  A very cool feature is that you view the game through a portal and with blinders turned on, you can see your bedroom at the edges of your vision and with blinders off you can still transition in out of golem vision making for a very surreal effect.  The lighting effects I’m pretty sure are the BEST I have ever seen in a VR game and add a sense a realism to the visuals that make this game look next level.  You thankfully have a full body giving a presence in this world that is added to by just smashing and hitting any surface you can.  Enemy Golems are never a joke and look awesome and are typically larger than you so even though you are monstrous, you’ll still feel small.  I had some noticeable pop-in during the larger scale sections of the game though these only occurred infrequently toward the latter half of the game and by no means interfered with my enjoyment, especially considering that most of the time you are navigating the cities smaller streets where the pop-in never really occurred.

Everyone and everything is fully voiced allowing for a very cinematic way to tell the story whether it’s a cut-scene or in-game action.  The voice acting is great with performances heavy in realistic emotion that add an air of authenticity to the few characters in the game.  A definite stand-out is the soundtrack which is from Halo composer Marty O’Donnell and knowing that little fact, you can hear similar music in Golem that fits in flawlessly whether a scene is solemn, or action packed.  Golem delivers a level of presentation that puts in the upper echelons of VR gaming and is an absolute joy to behold. 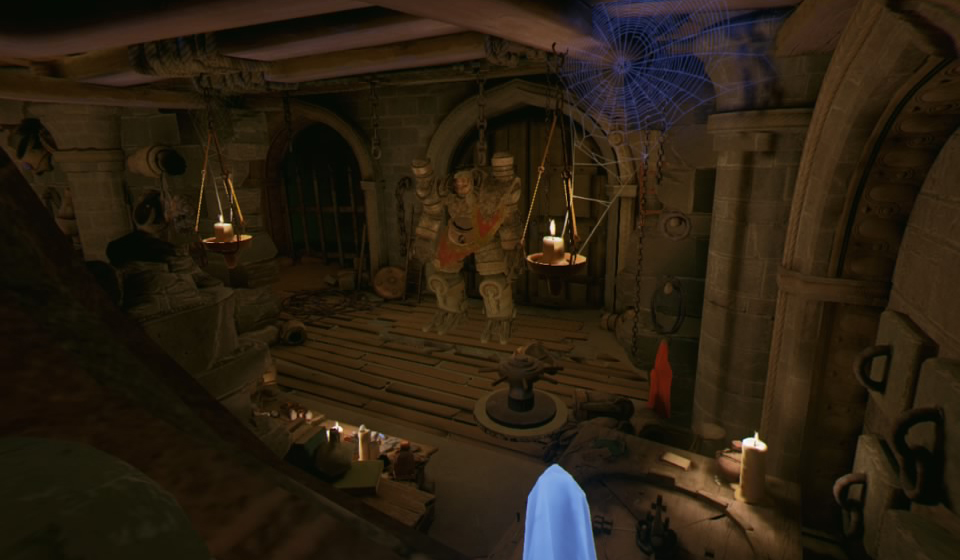 I love the sections where you play as a tiny golem!

This is a AAA title when it comes to VR and while I do take issues with the leaning mechanic used to navigate, the much improved DS4 and Nav support option renders my complaints moot as you now no longer have to use that head tracked mechanic.  Other issues that have been addressed include the ability to look around and walk at the same time allowing me to naturally take in the cities impressive visuals without being forced to stop every time I looked anywhere but straight forward.  I found the combat to be challenging during my initial few hours in the game though once I deciphered exactly how the game wanted me to attack, using exaggerated and extended motions, battles became a breeze and deaths stopped being a fault of the game as I was to blame for almost every hit I’d take. The new control schemes not only add in new and better ways to play this game, but pretty much fix almost all the issues I had with it.  A few still linger, most notably the repetition of enemy encounters should you perish as well as the monotony of the combat with the Golems only containing a handful of attack patterns, though this only really got to me during longer play sessions, typically after I died and had to fight the same golems over again. 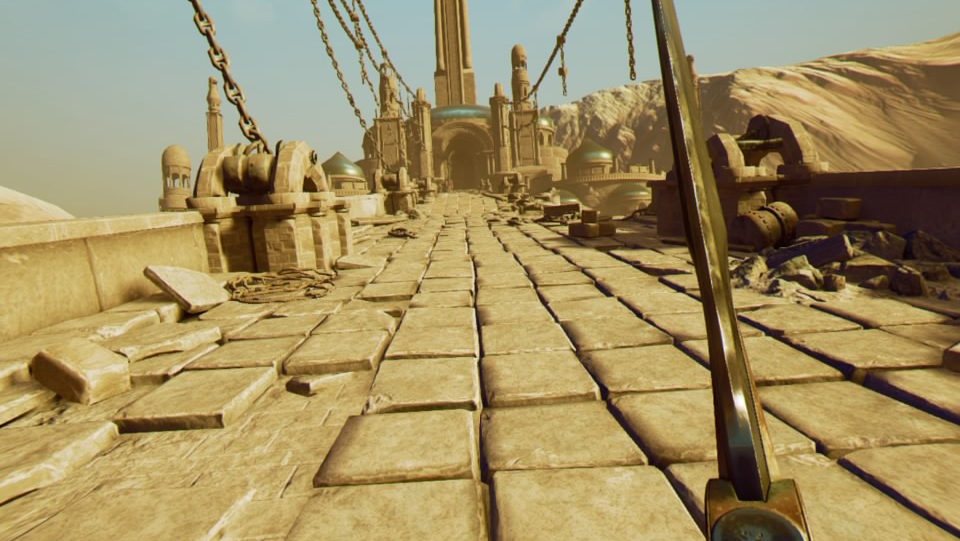 The visuals in here are breathtaking.

So, thanks to the v 1.02 update, Golem is a VR title with amazing presentation, intuitive movement mechanics and a fun combat system though I did take offence to some of forced repetition during the 6-hour campaign.  The city is a small, but is an  open-world to explore and I enjoyed that even after I beat the game as I could still revisit the city in search of the missed collectibles but on your first run, try to find as many crystals as you can as a bulk of the story is told through them.  Golem now stands as one of the best games released on the PSVR headset with a rich city to explore, fun combat mechanics and beautiful visuals.  If you have a PlayStation headset, you should probably pick this up.

What would I pay? This is easily worth the $40 asking price as it delivers an experience rich in VR goodness.  With the fixed controls, the only reason not to buy this is if you don’t have a headset as this is the type of game many of us have been waiting for!

Highwire Games provided The VR Grid with a press code for this title and regardless of this review, we thank them for that!