Time Carnage is a wave shooter which in all honesty is a genre that just needs to leave VR alone for awhile.  There have been a few great wave shooters, but most, more often than not are easily forgettable or just down right bad.  I can see the draw for a developer to make a stationary shooter in VR given some of the limitations of the technology but unless you have a crazy high budget to bring some over the top amazing visuals or have a unique mechanic that may redefine how you look at the genre, then I’d say it’s best to move along and maybe give us VR fans a break from the waves.  I was optimistic that Time Carnage would be a pinnacle in the genre as the devs put a lot of content in here from multiple game types to make for a somewhat whacky shooter.  Unfortunately, I expect this to get lost in the seemingly endless amounts of wave shooters that we already have and are yet to receive. 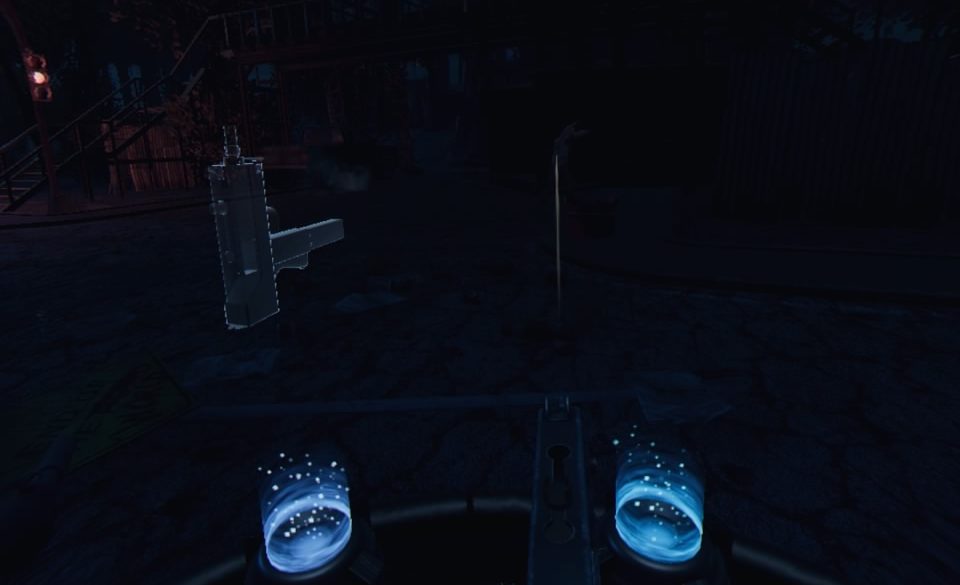 It’s hard to see, but I’m shooting at a zombie.

It’s move controllers only and a dual wielding affair here with (sort of) unlimited ammo.  The gunplay is very stock and is serviceable but doesn’t do a whole lot to separate itself from other games of this type.  What does make Time Carnage different is the way your guns are reloaded.  In front of you are 4 pedestals, which you can fill with whatever gun you want from the list of arms you have unlocked through playing the game.  You tap the Move button while your hand is near the gun you want to grab and press the trigger to fire.  When you are out of ammo or want to reload, just tap the Move button again and the gun gets placed back on the pedestal and begins to reload.  Each gun type has different stats, carrying capacity and reload rates and though it took me a little while to get used this mechanic, the more I played, the more it grew on me.  As you progress you also unlock abilities that can assist you in your play.

As I said, there is a fair bit of content to get through, the campaign takes place over 4 stages with 4 levels each, each containing 10 waves so for those that hate math, it’s 160 waves of action.  Additionally, there is a challenge mode, which sets up specific scenarios for you to test your skills in.  Maybe only headshots will refill your ammo you will only face one type of enemy or only be given a select loadout.  It’s a welcome addition that forces you to exit your comfort zone as far as loadouts go and provided some fun moments.  Also available is arcade mode which feels almost identical to the campaign mission and just allows you to use those unlocked abilities as you play through missions you have already put behind you. 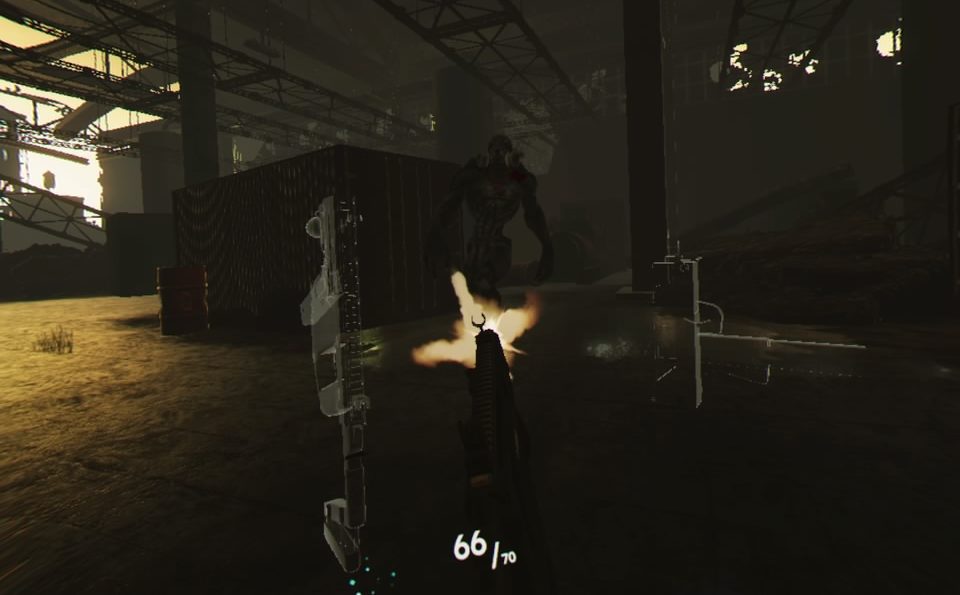 On paper, this all sounds good, but in practice Time Carnage feels like a mix of every other wave shooter you have ever played before.  Initial waves start off very easy and slowly ramp up in difficulty.  Some stages feature explosive barrels that can aid you if you are feeling overwhelmed and as the action takes place only 180 degrees in front of you, it’s pretty easy to not be surprised by the incoming hordes, though every now and then , one may slip past your sights and start chipping at the shields protecting you and your little time-traveling platform.  No matter what gun you pick, even 2-handed rifles, they are carried on 1 hand making many guns feel the exact same meaning all your really have to decide is which gun has the fire rate and damage that you like the most.  There are 25 guns available and include a bunch of machine guns, pistols shotguns, rifles and a few other more unique options. 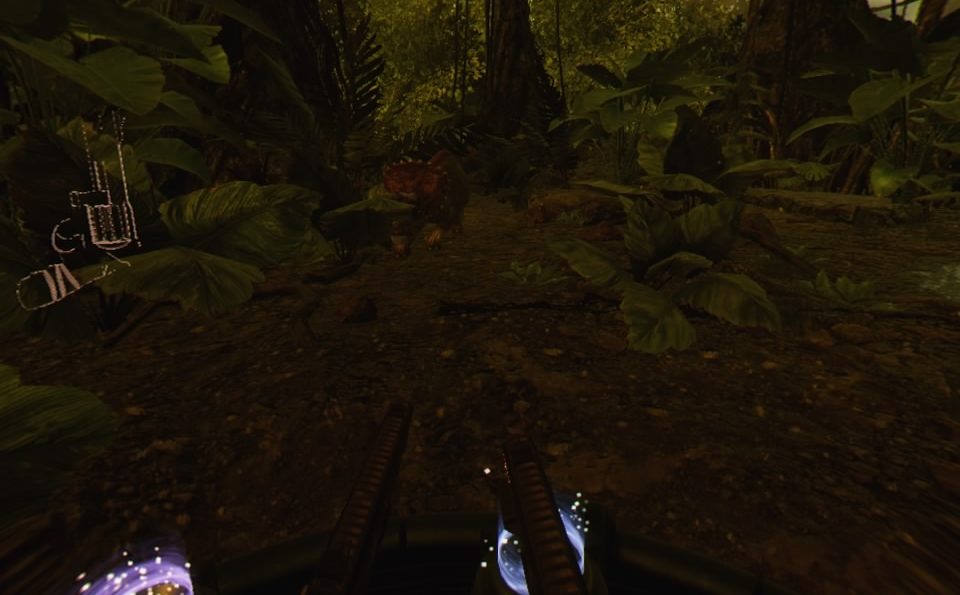 You can hear these Triceratops coming from a mile away

I found the stages looked alright, though there are a fair bit of jaggies present on many of the backgrounds.  Enemy models look okay from far away, but up close don’t hold up that well.   Almost every enemy type has 1 model, so you will be killing the same zombie, raptor, killer robot or skeleton again and again.  Lot’s of clipping occurs as enemies walk through plants and other pieces of the environments.  Larger enemies show up as you progress through each stage but barely take more effort to dispatch than the rest of the lemmings headed your way.  Some stages look clear, but others are very dark or washed out giving an odd disparity between levels.  There is a cool slow-motion mechanic at work that lets you catch a breath as you still move at the same speed but when enemies are hit, in or out of slow-mo, their ragdoll physics take over and many just go sailing back as if they were hit by a semi truck.  What’s jarring is that in slow-mo the enemies get super jerky, as if they only contain a few preset animations that become glaringly awful and look laughably bad.  Overall, Time Carnage doesn’t look awful, but outside of the ‘tunnel’ loading screen and the light bending sphere that brings and removes you from a stage, there is almost nothing here that you haven’t seen before in a VR wave shooter.

On the audio side, this is pretty much on par with the visuals.  Some intense music accompanies each level and each enemy has a different sounding footstep that gives away when they are coming, should you be facing the wrong direction.  Many of the ‘footstep’ sounds are really loud and don’t change in volume whether that creature is very far away or right next to you.  Add in that the some of your enemies will make footsteps sounds long before they appear making for some odd moments in the game where you are just waiting for them to rear their ugly heads so you can take them out quickly.

Like many wave shooters released recently, this one suffers from a lack of any real innovation.  It’s sweet that the enemy types here have so much genre variety, but they all basically play the same and the story linking these stages together is next to non-existent.  The reloading mechanic is sort of new, though we have seen similar reloading systems in both Shooty Fruity and Sneaky Bears.  Monsters follow pre-set paths with next to no AI and while you can choose 4 different guns in your loadout, I found that just choosing 4 of the same gun made for the easiest loadout and many earlier weapons just become useless as you unlock more powerful variants.  The additional challenge modes add some depth to this shooter, but most of the game is so repetitive that only after a few waves, I was just bored from the monotony.

What would I pay? Time Carnage is loaded with content but is so mundane as to make most of that content feel redundant.  It’s not broken by any stretch, and for those who are looking forward to another wave shooter $20 isn’t nuts.  For anyone else who is just tired of this genre, Time Carnage isn’t going remedy that feeling.  $10 is as much as I’d pay for this.

Wales Interactive provided The VR Grid with a review code for this title and, regardless of this review, we thank them for that!