RTS and God simulators would seem to a near perfect fit in VR.  The ability to look over the map as if you were there and manipulate the world with your own giant hands makes perfect sense in VR.   For PSVR, the genre has only seen a few releases and like every game before it, No Heroes Allowed still manages to separate itself from its competitors and feel like its own monster.  Many of you may not know that is not the first game in this series, but the fourth and each carries a similar theme, you are the god of destruction and your mission is create evil minions to not only defend against attacking heroes, but assail their bases beating them back to overtake their castle and claim victory.  It’s neat twist on the genre and addition of some light-hearted comedy gives this game a unique feel. 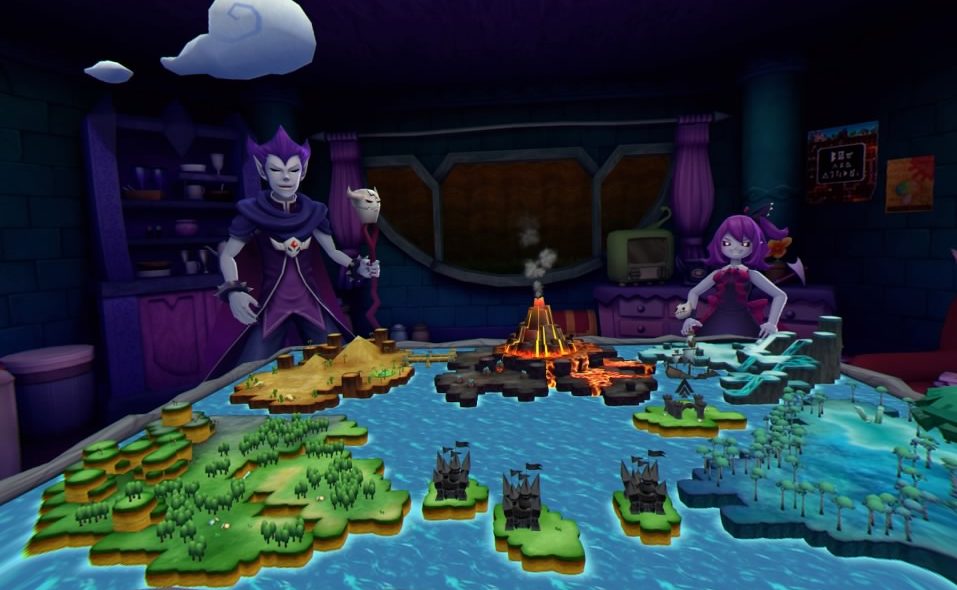 I had assumed that, because of the game type, it would be Move controllers used here but, nope.  With DS4 as your only option, the game assigns your actions to the various buttons and tracks your controller by assigning an arrow to it.  By steering and tilting your controllers, an arrow moves around the map which allows you to target specific areas on the map, essentially acting like a PC mouse.  Your base is the starting point on the map and you must build out and toward the Hero bases.  You are given a few different buildings, each spawning a different creature type that is used for offence, defence and food for your other troops.  You read that right, many of your more powerful troops need to feed on the smaller ones or risk dying of starvation and its this mechanic that the game is centered around.

You can only place buildings on the darkened areas surrounding other buildings, meaning you must build your base outward, 1 by 1 toward the enemy.  Your most basic troops are little more than blobs that need to eat food at certain points on each map so taking these points is very important.  From here you can build more powerful units, each feeding on the previous(mostly) to stay alive.  Stretch your buildings to thin and the incoming heroes are the least of your worries.  It took me a awhile to figure this mechanic out as I honestly didn’t need to account for it until around the 8th mission as every one before that allowed me to expand and attack so fast that my troops starving was inconsequential.  Suffice to say, mastering this will be key to your victory and if you don’t, then expect to fail miserably in the later missions. 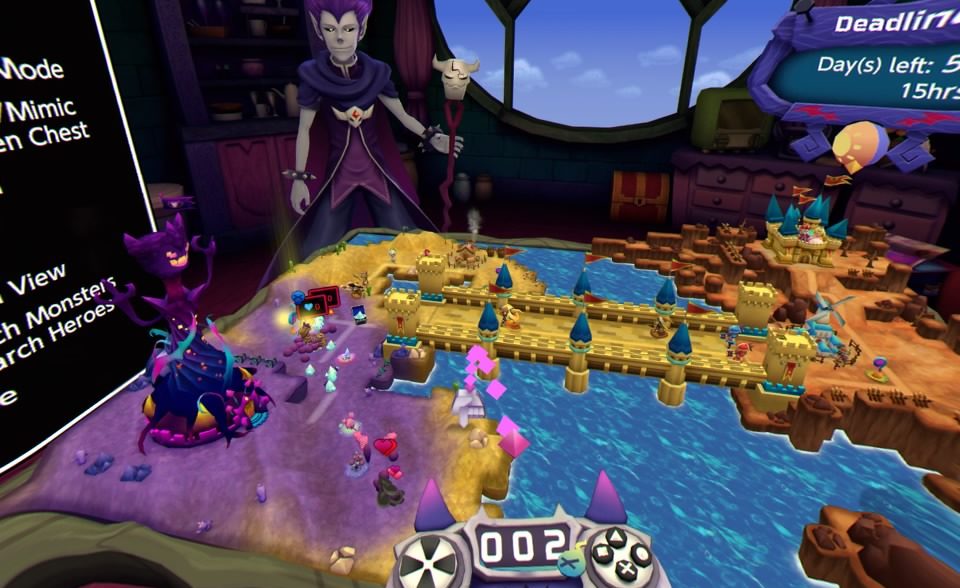 Stage 8 is where things start to get serious!

Besides just troop spawning and expansion, you also have a few more powers at your disposal.  These ‘G.O.D.’ powers allow you to directly affect the world by guiding your troops to a specific target (a base or castle), hitting enemy troops with a blast to aid your minions or a few more odd ball abilities.  You can combine creatures to make more powerful creatures.  Suck up units and transfer them across the map if they are needed elsewhere.  Every enemy killed or base taken gives you points that can be spent on your own grotesque horde and successfully completing a mission awards you a different currency that can be spent on troop upgrades.  It’s a single player campaign only comprising a 15 stages, but don’t be fooled into thinking this is crazy short as completing the game should take you upwards of 5 hours or so.

The opening moments have you being summoned by Badman and Badmella to assist them in controlling the world.  Through the 1st 3 levels, which are just tutorial stages, Badman guides you through the games subtleties while Badmella quips in now and then or just stares at you with a very creepy smile.  The overall art style here is exaggerated, cartoonish and works great in VR.  A bright color palette matches the friendly visuals and if you so choose you can lean toward the table for a closer view of the action.  You can spin the table or change to pre-set vantage points just to make sure you’re not missing any of the action.  What I didn’t realize until my 1st failed mission was that the ‘war room’ you are in is actually your main base on the battlefield and when those dastardly heroes destroy your base, they quite literally break into your room and announce your defeat.  It was cool touch that greatly added to the immersion in this godlike game. 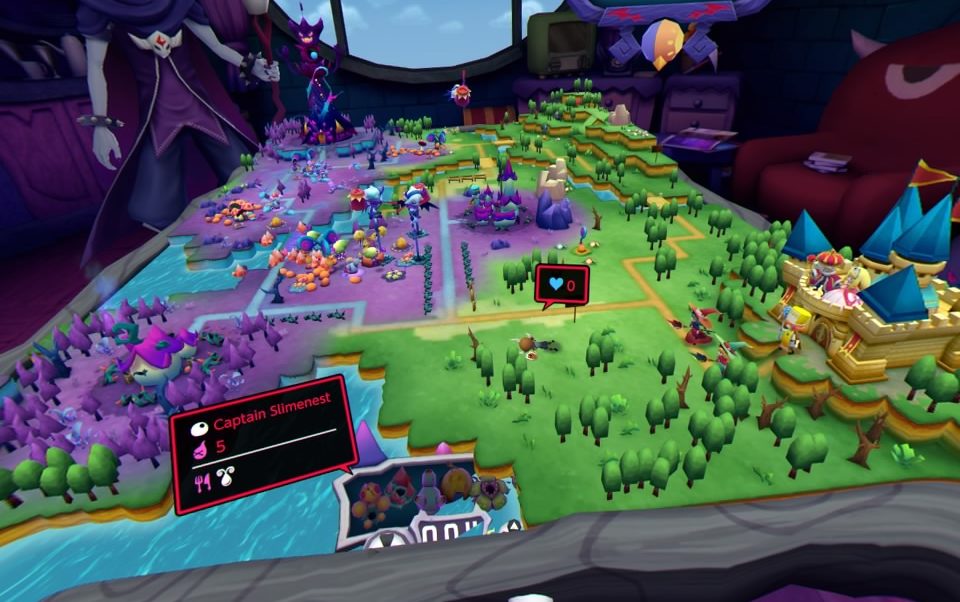 Expansion is key, but don’t spread yourself to thin!

The music peppering this is instantly forgettable which is still way better than being annoying and the highlight in the audio department is Badman and Badmella.  They lay down some lame jokes and bad puns, but I like that sort of thing, though Badmella’s California Skater Girl accent was a little grating.

I wasn’t the biggest fan of the viewing choices offered here as none gave me the opportunity to zoom in close on the action.  Not game breaking in the slightest and the pre-set views do the job of making sure you can see all the action on the board, but I would have liked a little more control over that.  Each level has a countdown timer and if you don’t finish off the heroes before time runs out, your pretty much screwed as they get to ‘cheat’ becoming overpowered beyond fairness and walk through your troops like they were nothing more than distractions.  When a stage gets to that point, it just sucks as you have not only wasted your time, but the game just beats it into you how much you suck.  The time limit is only there as a factor for the end score and the obvious goal, but I just felt it rushed me and took away from my enjoyment of the game. 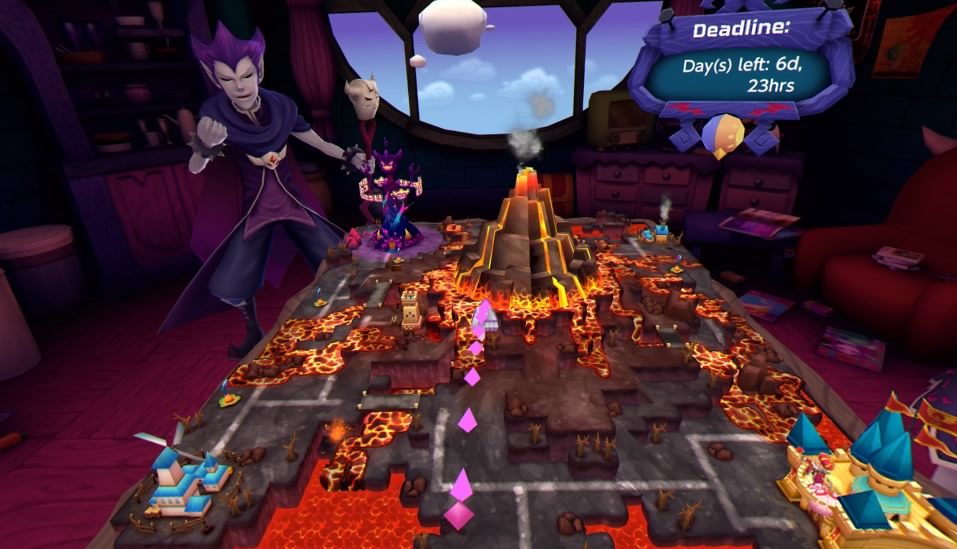 There isn’t much in the way of story other than the initial introduction that explains what your objectives are.  There is no multiplayer either and the only reason to come back would be to beat your own score.  That’s not say there isn’t value here as fans of the genre are sure like what is presented here.  No Heroes Allowed carries a nice polish and some solid gameplay.  The challenge doesn’t really happen until halfway through the game, but when it kicks in, it dramatically increases the fun factor.

What would I pay? This gets a little tricky as while I did enjoy my time with this, it wasn’t until the latter half of the game.  Don’t get me wrong , the first half isn’t awful, but I basically just spammed building and troops to victory, thus removing any strategy the game tried telling me I needed to do.  $30 just seems way more appropriate for the content here.