I’m not the biggest fan of the situation simulation genre; that’s not to say they are bad games, far from it.  I totally acknowledge that a few of the most important VR games are in this genre and are also some of the higher quality games available for any of the headsets, they just kind of bore me.  I typically find the tasks to be to simple to keep my interest very long or the emphasis on freedom just has me wishing for something to do besides just mess around.  So far, we have seen only unique IP’s in this genre for the PSVR but now, thanks to the fine folks behind Rick and Morty, we get our first tie-in that uses the same tropes we have seen in similar titles, yet thanks to the universe it takes place, still manages to feel a little fresh. 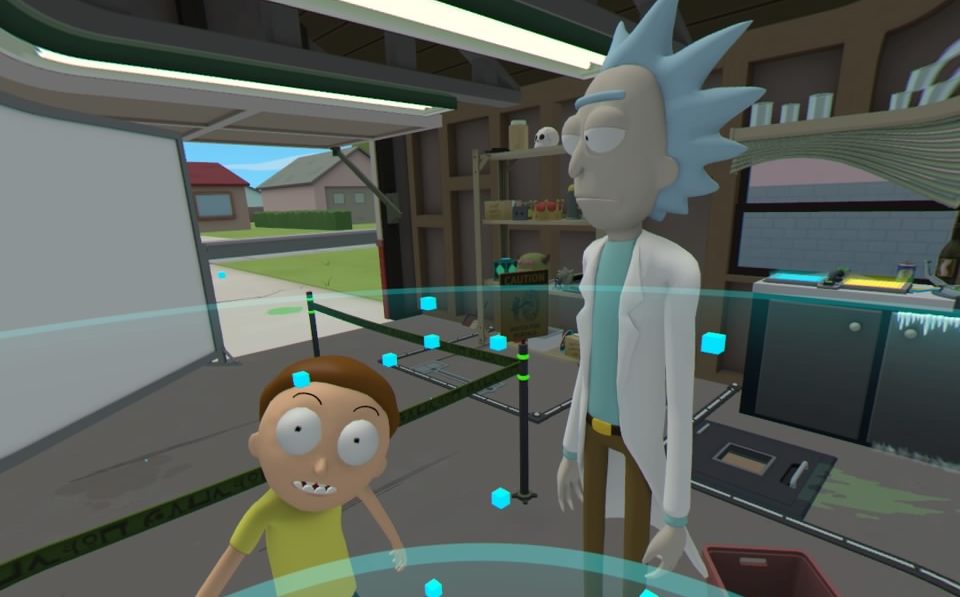 Like any situation simulator, you need 2 hands and thus need 2 move controllers.  As a clone of Morty, you just grab stuff and move it, place it, push it, pull it or any other actions that require the use of your awesome human extremities.  Some unique gaming elements include a wrist watch where Rick communicates your next task to you, a You-seeks which summons a being who mirrors your every action allowing you to manipulate objects out of reach, and portals which bring you to a completely different area to retrieve an object needed for whatever you are currently working on.  There is a shooting section that offers some simple dual wielding blaster action and a game inside a game lets you make some simple life choices whereupon you can see the consequences of your actions.  Rick’s garage features a limited teleport system that takes you from one of 3 stations while the rest of the game is played stationary as you work with whatever is in front of and around you. 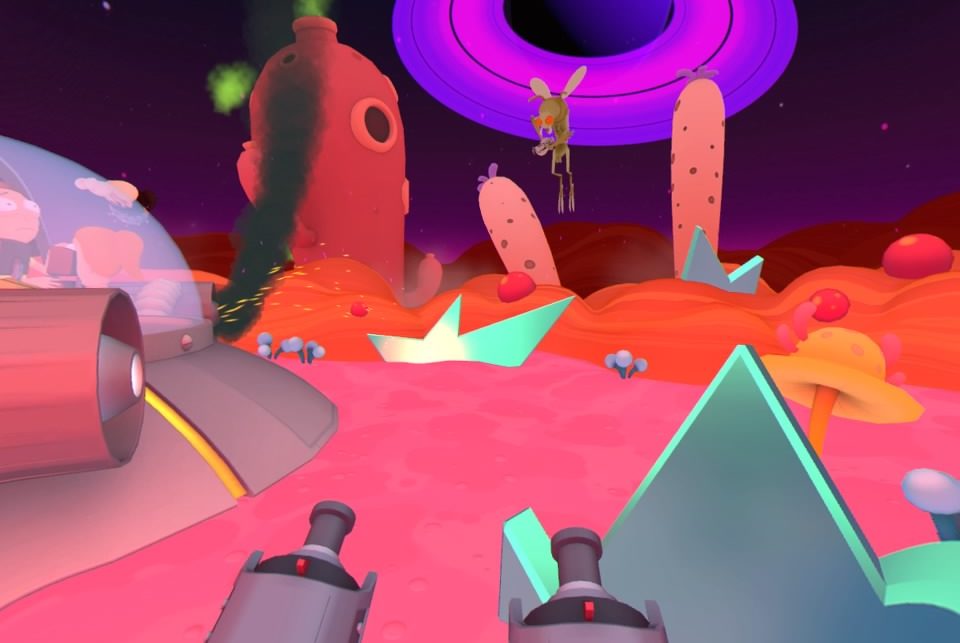 It’s time to get your dual-wielding action on!

Typical of the genre, and completely expected given the show this is based on, everything here is cartoonish and exaggerated making for visuals that pop in VR.  The simplistic details on models and basic color palette give everything a very clean look.  As a fan of the series, venturing into Rick’s and Morty’s world is an absolute delight and almost every “random” object around you is a nod to 1 episode or another and had me chuckling in remembrance of those past adventures. Seeing these characters in glorious VR is crazy awesome.  The few environments are fully realized and are perfect representations from the series which is great for people familiar with the show but may be a little less impressive to those just dipping there foot in this universe for the 1st time.

Thankfully, Justin Roiland and a few other actors reprise their roles here and play their parts without fault.  Rick is a sarcastic, crusty old scientist who continually berates not just you but everyone else in the game, while Morty is a more dim-witted insecure teenager who takes just as many jabs at you as Rick does.  The comedy here is great, though sparse at times, but nails the same level of humor from the TV series.  A few characters from the series pop up and further hammer home just how niche this title can be at times.  Like I said, fans of the show will pull a lot from this while those unfamiliar may not just not quite get what is happening. 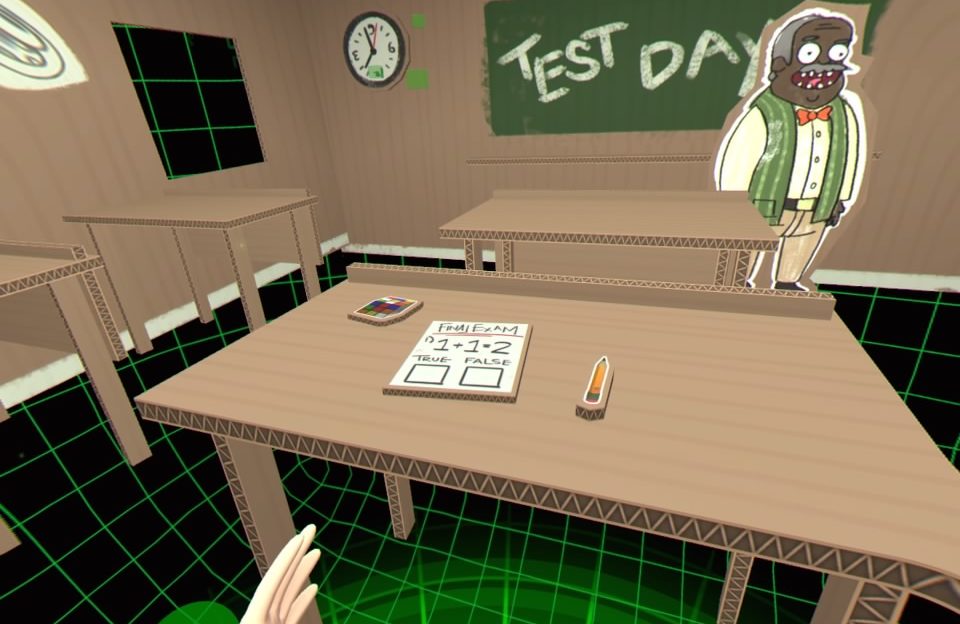 Troy is a game inside a game…so meta.

There are 3 mini-games you can revisit, a shooting gallery that has you shoot armed insects and tracks just how many you can kill in one session.  ‘Troy’ is a parody of a game featured in the series that’s let you make very simple choices at certain points in a virtual life and watch the comedy unfold.  Troy takes about 5 minutes for 1 playthrough and offers enough different options to make this feel fresh a little longer than I thought it would.  Lastly is a battery charging station which requires you to spin dials, pull levers, and press buttons all at an ever-increasing pace which was fun during the required campaign portion, but I had little drive to return to it after I beat the game.

My largest issue with Virtual Rickality is the tracking.  At numerous times during my play I was battling the limitations of the PSVR camera as sometimes objects were just out of the cameras range.  I ended up calibrating my position in game to be lower than default, which remedied some of these issues, but when I got caught up trying to grab something, I couldn’t help but get a little annoyed.  Some may find the lack of guidance during some portions of the game to be a little confusing, but I liked having to just stop and think about what the game was asking of me and figure these puzzles out on my own.  The game never gets to difficult but offers enough unique gameplay elements to make it stand out from similar titles. 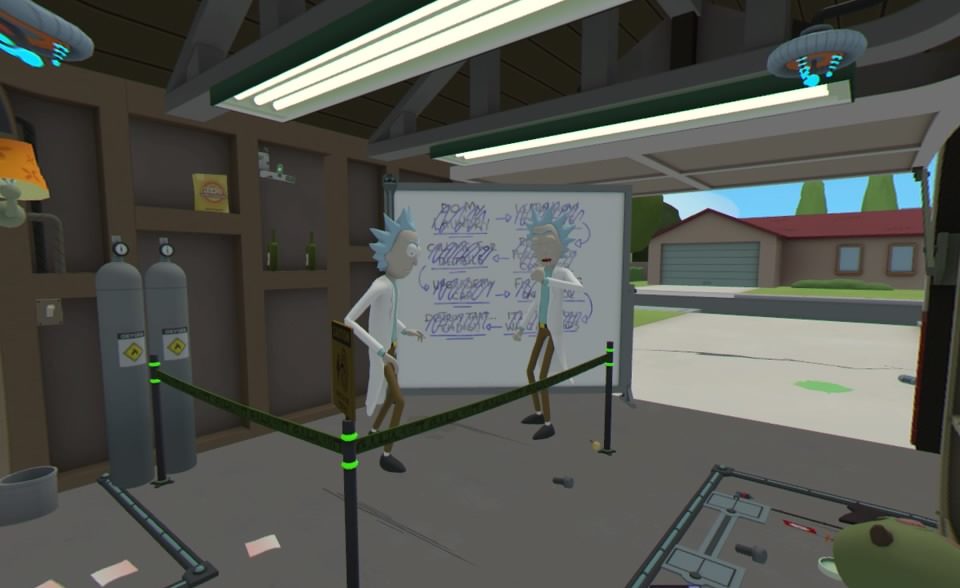 You can’t help but feel like you are playing through an episode from the series!

Virtual Rickality’s largest strength is its fan service, which ironically is also it’s biggest weakness.  I expect fans of the series to eat this up and probably spend more time in here than they might think.  The actual game took me around 2 hours to complete, but I was messing around a bit as I enjoyed looking at a Plumbus and other items from the series or just making sure I listened to every piece of dialogue without cutting it off.  Once the game is complete, there are a few bonuses and Easter-eggs to look for which once again are just for Rick and Morty fans.  If you have never seen an episode of Rick and Morty, then I feel most of the humor and jokes will just fly over your head and you’ll be wondering what all the fuss is about in the first place.

What would I pay? As a fan, I’m okay with the $30 asking price, though some may feel it’s a bit steep.  Virtual Rickality plays like an extended episode from the series and I loved being a part of it.  For those that aren’t familiar with TV show, you’d be better off waiting for a sale.