We are now 2 years deep into the lifecycle of the PlayStation VR and have not only seen a wide variety of games released but also our more then fair share of wave shooters.  In this crowded genre it can be hard to stand out as at this point, innovation is hard to come by and following the tried and true formula of standing still while enemies come at you from all sides is a tough sell as many of us have been there and done that a few too many times.  Heavy Fire: Red Shadow looks to follow the more formulaic side of things with a wave shooter that has you defending  singular locations from the onslaught of enemy North Korean soldiers and vehicles. 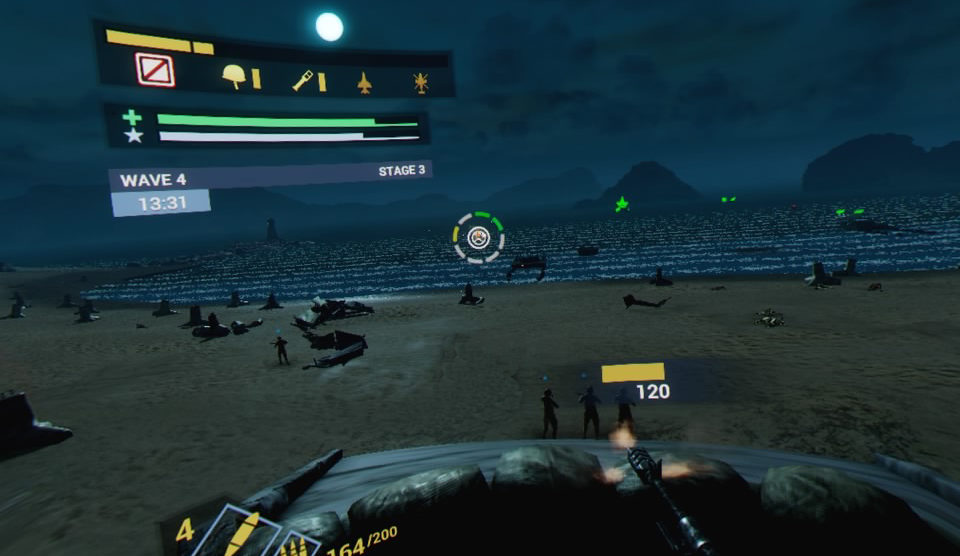 Get ready to shoot a lot of North Korean soldiers!

Heavy Fire is playable flat and has received a VR patch as well and plays the same on either screen with the DS4 being your only method of control.  Gunfire and other abilities are all assigned to different buttons with your turrets position and sights mapped to the thumb sticks.  Comfort settings allow the gun to be mapped to the headset, which could unsettle those with weaker constitutions, or be locked in place forcing real-world turning to line up your targets, but as this is an untracked DS4 game, tracking is never an issue. Aiming your reticle can be tricky, especially on enemies far away, as the sensitivity is a little to high making finite adjustments very difficult.  You just face the same soldiers and vehicles who come from all directions as you progress through the 8 stage campaign.  This is an arcade shooter with a fair amount of power-ups and modifiers where killing the opposition and completing in-game objectives rewards you with reinforcements, health, ammo and special abilities.  You can summon supply drops, infantry troops, bombing runs and a few other options to aid your efforts.  Special abilities like health regeneration or more powerful shots stay with you throughout the campaign, minimizing any challenge the game throws your way. There is a story here about North Korea going to town on the world, but it’s really just setup the gameplay as you take out hordes of enemies.  Each level is broken up into stages and levels which serve as checkpoints as the action never changes up from the start of the game all the way to it’s conclusion…provided you make it there.

You would think as this is a stationary shooter the visuals would look decent, but the second I activated the VR mode, i winced at the VR menu screen, now worried about the look of the game.  Except for the immediate area you are in (your fox hole and gun) everything else looks messy.  Jaggies are all over the place making even larger objects looks like blobs and the enemy soldiers appear as a collection pixels with green icons above their heads just so you differentiate them from the environment.  The water is hilariously bad with odd coloring, though some buildings in the environment are destructible, which doesn’t affect the game in any significant way, but does add a little immersion.  I was into the planes and choppers that flew by as they had a great sense of scale, especially when compared to the boats, which even on the beach looked a 1/4 of their supposed size.  While there are 8 stages in total, cut that number in half as each stage is repeated, only in a day or night cycle making the action feel and look even more redundant.  The cinematics that introduce the levels and explain the your current situation are just fluff and barely more then animated maps. 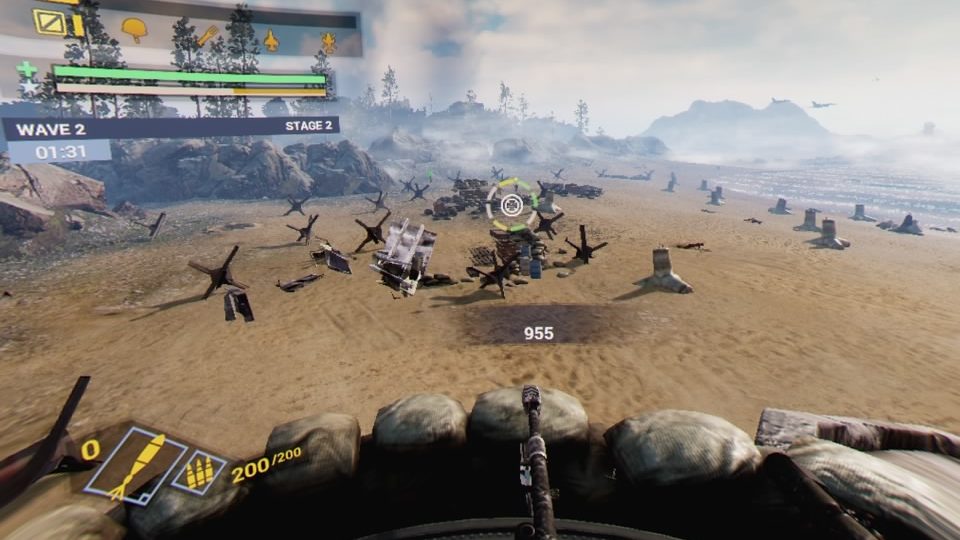 You get to play every stage twice!

On the flip side, the audio is solid with weapons have some decent punch and vehicles sounding great as well.  When the fighter jets fly overhead it’s very loud or when you summon infantry to back you up they shout out looking for orders.   Your commander carries you through the tutorial and still shouts at you during campaign when objectives pop up and if anything shines in this game, it’s the sound effects.

Heavy Fire has a flurry issues the 1st being it’s simplicity.  For all the story and game mechanics, each stage feels the same as the last, especially with only 4 stages in total.  The levels take around 20 to 25 min each which is way to long to stay in one spot, unloading at the same enemies while calling in support over and over and over.  The objectives that pop up give a quick focus to your endless shooting, but 1 objective requires headshots, which is laughable as in VR the gun is to sensitive  for that kind of pinpoint accuracy unless you let the enemy get close to you, which is a bad idea.  Every other objective asks you to either kil ‘X’ amount of enemies or not get hit by ‘X’ type of enemy, effectively rewarding you for doing what you would do anyways.  Enemies appear very far in the distance, which gives you plenty of time to get rid of them, but with everything up close having aliasing issues, the stuff far away is nothing more then pixels marked with an icon.  Enemies come from all around you, but it’s actually rare when they appear behind you (relative to the camera) making the full 360 turning feel under used.  Vehicles are apparently driven by drunk soldiers as they endlessly smash and get stuck on the environment, which is eye rollingly bad in the stages that are destructive. The first 5 minutes of the game is the entirety of the 3- hour(ish) campaign and once you finish it, you unlock endless mode which does not feel like a reward at all as it’s even more of the same where the only real test is to see how long you can last before going insane. 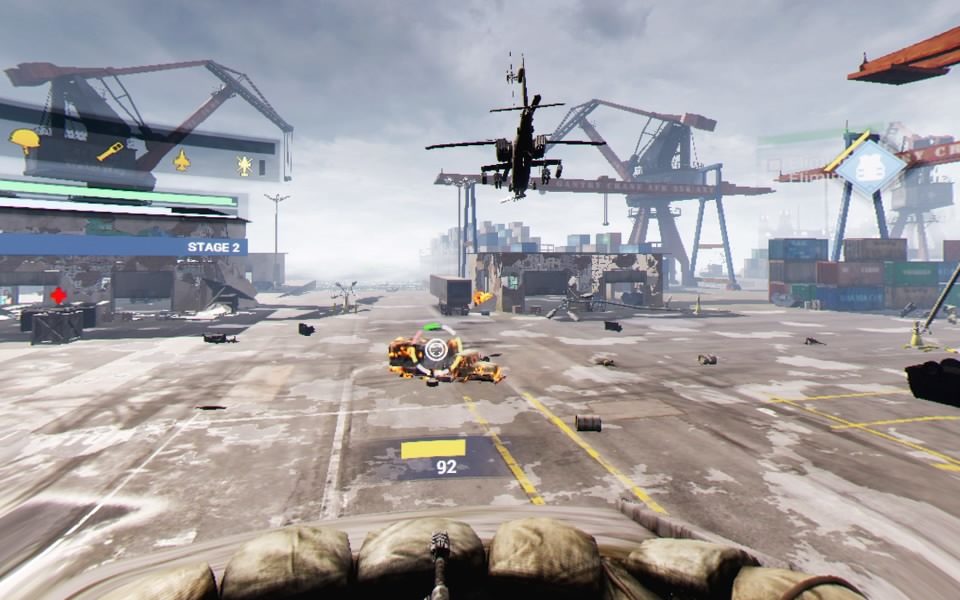 This entire game is the definition of monotony and the only sign of progression is the unlocked abilities that you need to advance through the campaign and while the campaign gets more difficult in theory, the abilities counteract that extra challenge.  Heavy Fire is a game that shows all it’s cards in the first wave of gameplay and keeps doubling down on that montony.  The gun play is uninspired, the game does not look good and story is irrelevant leaving us with one of the most forgettable games to come across our headsets.

What would I pay?   The asking price to play Heavy Fire: Red Shadow in VR is insane.  The base game is $20 and the VR patch is an additional $10 making this game a $30 investment.  The most I would ever pay for this is $10 and even still, almost any other stationary wave shooter in that price range available for the PSVR offers up a higher quality experience and utilizes VR in better ways.

Mastiff Games provided The VR Grid with a code for this title and, regardless of this review, we thank them for that!