The lack of military based shooters is apparent for the PlayStation VR with only 2 names coming to mind. The Rainbow Six inspired Firewall: Zero Hour and the much more cartoonish, and underrated, Honor and Duty series and while both offer their unique takes on the genre, there is still a pretty large void when compared to what we seen outside of VR. Warzone is the latest military shooter to reach the headset and is designed to simulate online play with the caveat that the PSVR version contains no online modes. 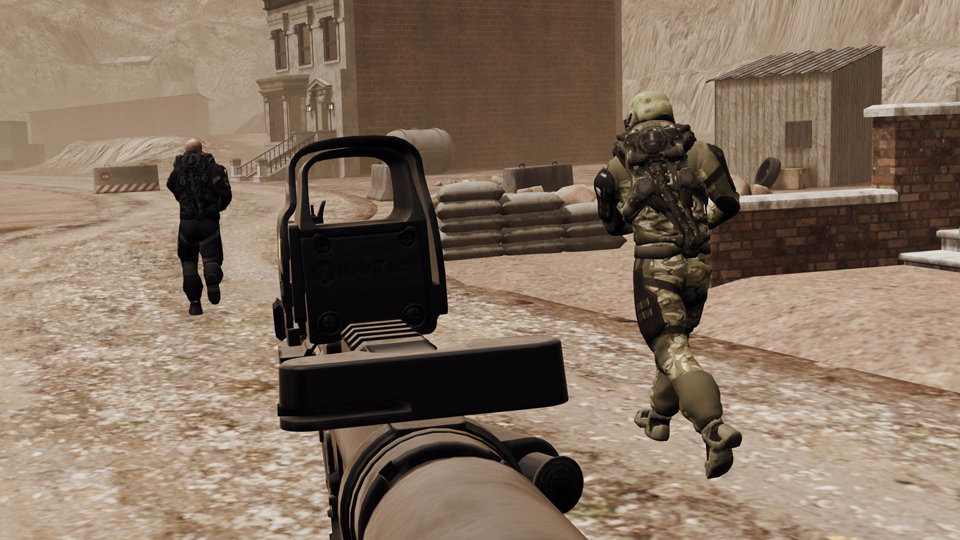 You may be on a team, but you are an army of one!

This controls like any typical VR FPS, supporting both the aim and DS4 and of course if you have it, the Aim is the way to go. It is worth mentioning that at the time of this review, only click-turning is available which will be the first of many issues that hurt this game. Besides shooting at bots, you can also hop into vehicles scattered around each stage for some vehicular bot-slaughter action. As this is a single player only experience designed to simulate online play you might expect there to be campaign or something to pad that content and there is not. Instead you can choose from 1 of 4 modes; Team which places you in 5 v 5 battles, Single which has you alone against other AI soldiers, Roam allows you to explore the maps with out combat and Practice places you in shooting gallery where you can try out all the games weapons. You start off with only a few select weapons but can unlock more as you play the game, assuming you get some decent K/D ratios. There are 2 maps to choose from with the end goal here really being just to play and unlock weapons, I guess. 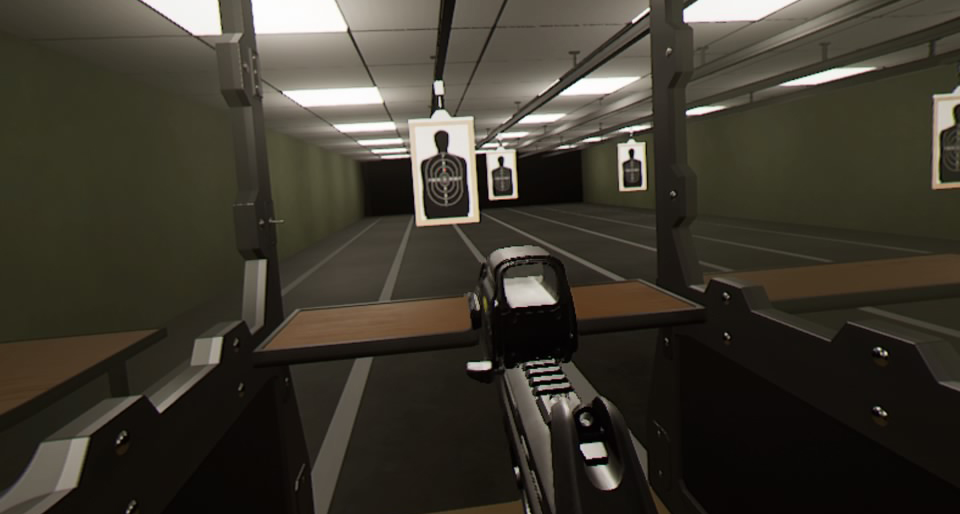 Warzone is not the prettiest game in the headset but does have a few highlights. The stages don’t look terrible and while the texture quality is lacking, I didn’t take too much offence to it though many surfaces do look a little flat. The 1st stage is an arid canyon with a small village at it’s core surround by cliff sides while the 2nd is a smaller, though still fairly large, wintery base full of large tents and smaller building. Some of the maps have some have some nice little details like being able to walk through some buildings or seeing some items scattered about but for the most part these stages feel lifeless save for the other bots and yourself and come off looking more like a collection of assets then a well designed stage. The character model look alright at first glance though carries limited and recycled animations, slowly walking across the maps in very robotic fashion. As far as I can tell there is only the one model available but will be wearing different outfits so they don’t look identical and to tell the difference between your team and the other guys, green names like Chris or Nathan float above their heads so you don’t kill them by accident. When they come into contact with each other, brief gunfights ensue with minimal AI used as they don’t bother to take cover or stop walking in whatever direction they were before the gun fight started. Hopping into a vehicle is fun for a few seconds as you drive over the opposition but there are no animations for impacts so enemies hit will instantly appear as prone bodies and the levels aren’t really built for vehicles as the action tends to end up in the center of each stage which is littered with obstacles and is a little too congested for the large trucks.

Sound effects are alright with guns carrying a fair bit of power and a little actiony track plays in the background.  Your footsteps always sound like they are coming from behind you which had me checking my back all time as I thought someone was behind me. 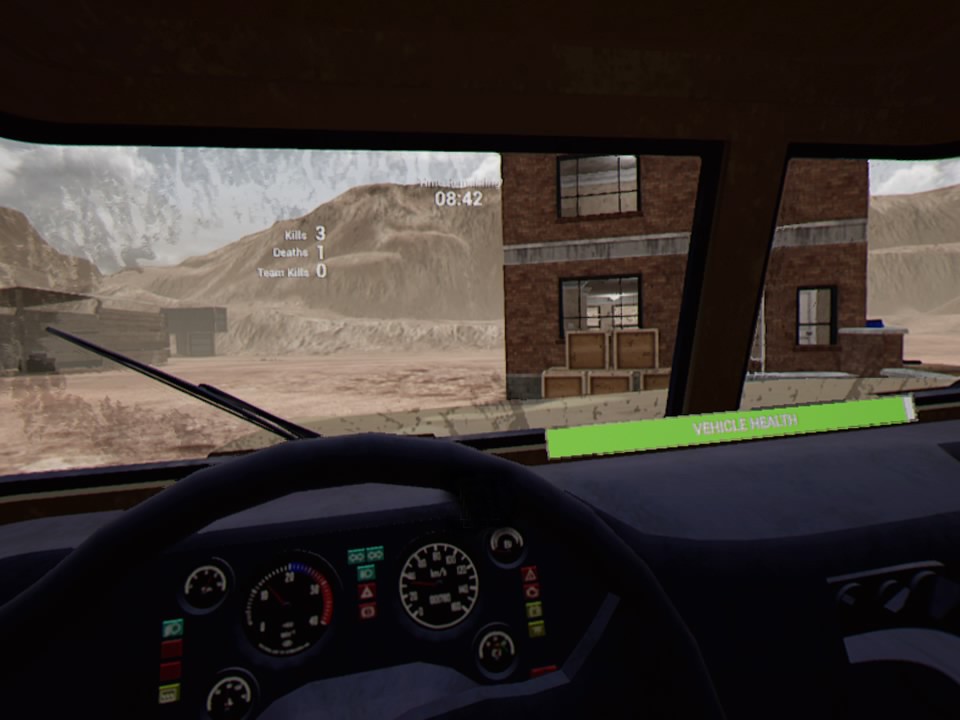 Driving vehicles is next to pointless.

If Warzone was a competent shooter then I think only playing against bots would be less of an issue then it is. Unfortunately, that’s not the case. The forced click-turning in a game like this is a killer as is the Aim implementation which felt off as I was tilting my gun way more then felt natural to bring up my sights. The AI is either incredibly stupid or incredibly cheap as they blindly walk around the map in any particular directions at speeds way slower than you move. To make up for the lacking AI, they can shoot from an incredible distance and I died so many times without an enemy in sight. Luckily, the only bullet physics at play are that they leave the gun and will travel in a perfectly straight line until they hit something so no matter which weapon you use, the second you see a few moving black pixels in the distance, you can unload and kill your foe with relative ease. There is also no winning or losing as scores are not counted with only your K/D ratio applying to how much loot you get at the end of round so you never know if you or your team actually won. Terrible spawn points had me caught in looping deaths as I continued to be killed and spawn in the same spot until I managed to deliver enough damage to my killer to break the cycle with the same applying the AI allowing me to camp in one spot and wait for them to appear for a quick kill. Unlocking new weapons changes nothing about the game and too soon I just ended up finding sniping locations just to pad my stats, completely ignoring how a game like this should play. Weapons also don’t show any kind of tracer bullet so firing from the hip is near impossible and that is made worse by the fact that random surfaces may not even show bullet impacts making it look and feel like you are firing blank rounds. The maps are also too large for 5 v 5 and ridiculous for single player action making for long moments where you can’t find anybody if you spawn near a maps edge. 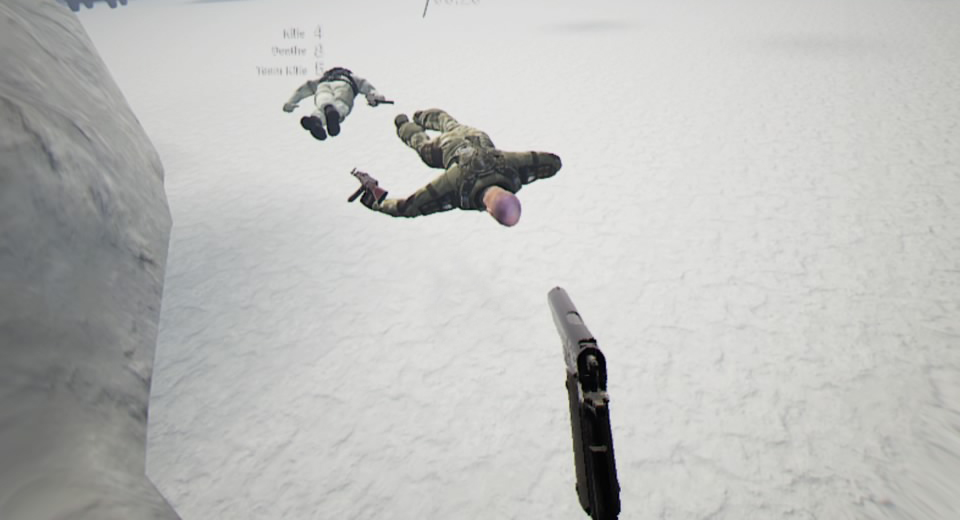 Exploiting this game is way to easy at times.

Warzone for the PSVR feels like a shell of a game underutilizing the tech and sells itself as “play(ing) like a competitive multiplayer shooter but instead, with AI.” Unfortunately, it fails to meet even the most minimum of expectation having near broken AI, poor mechanics, no progression system and even forgets the most basic aspects of multiplayer like letting you know if you’ve won a match or not. There are some passable elements in here, but they easily overshadowed by the shear amount poor choices making this an incredibly hard sell for anyone.

What would I pay?  In its current state, I can’t recommend paying anything for this game. Any fun you’ll have is soon washed away by just how poorly everything works in here and only leads to annoyance, frustration and boredom.

Sinn Studios provided The VR Grid with a press code for this title and, regardless of this review, we thank them for that!