Survival Horror is not a new genre in VR.  Games like Resident Evil 7 or Here They Lie show us just how cerebral and suspenseful these games can be.  The Persistence is the latest game in the VR Survival Horror Genre but adds another genre to the game, Rogue-Like, to make for an FPS game that feels familiar yet wholly original.  You are the only survivor on a derelict science vessel that is drifting way to close to a black hole and it’s up to you to save the ship and yourself through 5 campaign stages. 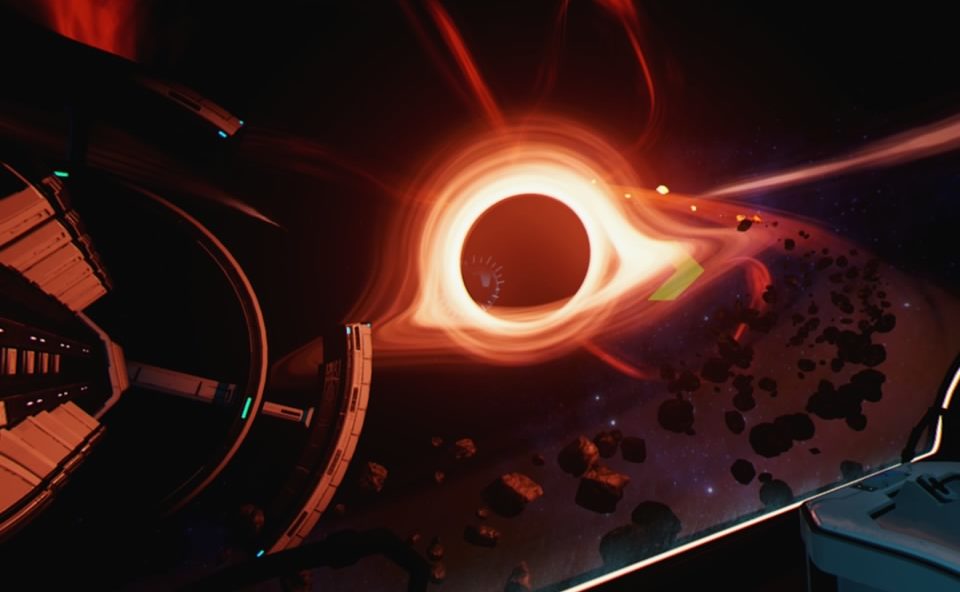 The black hole is sucking your ship in and it’s up to you save it and yourself!

Using only a DS4, this plays like any traditional FPS.  After you wake up in a cloning machine, you are introduced to the basic mechanics and sent off into the ship to repair the systems needed to save the vessel.  Options are available for click turning, blinders and few other comfort settings so anyone can play with their ideal setup.  There is a teleport mechanic in game that allows you to bypass barriers and Fabricator stations scattered throughout each stage can create weapons and abilities to aid you in your survival.  Whether it be Stem Cells collected from the insane clones you’ll encounter or the Fabchips and stem cells found lying around, each can be used at different stations for unlocks and upgrades.  As this is a Rogue-like, when you die, you lose any items you had on you, but when you’re put into a new body, you still retain the same physical enhancements and loot, allowing for further upgrades making the game easier each time you increase one of your natural traits.  Upon death, the entire level design changes again and you must start from the beginning to get to that stages main objective.  It may sound a little tedious and at times I suppose it could be, but the longer I played and the better I got at surviving, the more fun I had.  Your progress is also saved so should you have completed some of the main objective, you don’t have to worry about repeating those aspects of a stage.

Live. Die. Repeat….that movie tagline applies here as well.  There is a learning curve in the Persistence as the game does very little hand holding and requires you to figure almost all aspects of the game on your own.  Stealth is the name of the game and your best hope at survival.  Sneaking up on the clones allows you the option to harvest their stem cells and take them out without any incident.  Should you alert them to your presence, they waste no time in trying to kill you and will run you down and take you out by whatever means they have.  In this regard, The Persistence plays very much like the action bits in ‘The Last of Us’ with confrontation being the last option.  Thankfully, you aren’t a pushover and can take a few hits (and a few more with upgrades) and have a shield that can deflect incoming attacks if timed correctly.  Your main weapon, the stem cell harvester, can be used as a melee attack, but to survive larger encounters, you better buy every weapon you can.  This is however potentially detrimental as currency spent on weapons is currency not spent on those core upgrades so there is a trade-off between long and short-term survival. 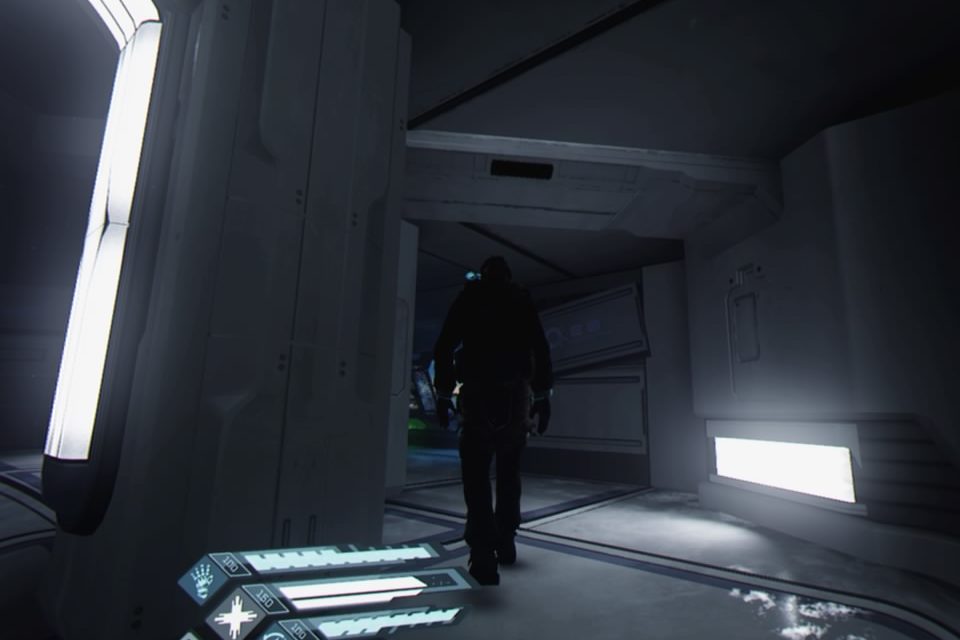 Stealth is key as you sneak up upon your victims

The Persistence is all about atmosphere and I have not been on this much edge since RE7.  Starting off in the Recovery center (or whatever it’s called) gives you a stellar view of the ships peril as a large black hole is sucking in everything in sight.  From here you teleport to the 1st level and the intensity ramps up.  The ship is in shamble, wall and floor panels have been blasted apart, debris litters the area, and lighting is sporadic giving everything a very haunting vibe.  Large computer screens are all over the walls and seeing the silhouette of the next bad guy you have to face automatically raises the tension.  Thankfully, you have a flashlight that offers a little help at combating the darkness but doesn’t provide enough light to ever make you feel comfortable.  If you die, you restart, and the entire map changes so don’t even bother trying to remember your steps, though you wouldn’t have to anyways thanks to the map you can bring up by touching the touchpad on the controller which highlights all the locations of interest for you, and also tells you which rooms you have already been in.

No horror game would be that scary if it sounded terrible and like the visuals, the audio here is superb.  The 3D audio makes every groan of the ship, explosion and screams from the enemies some off the most unnerving I have ever heard.  I can’t count how many times I heard a sound in the distance that immediately raised the hair on my neck as I sweated a second before realizing it was nothing.  Mutant clones shout out next to intelligible words as they pace back and forth looking for their next victim and when you encounter the dudes than run through vents all fours, every time you hear them scurry away, I bet you’ll be wigged out. 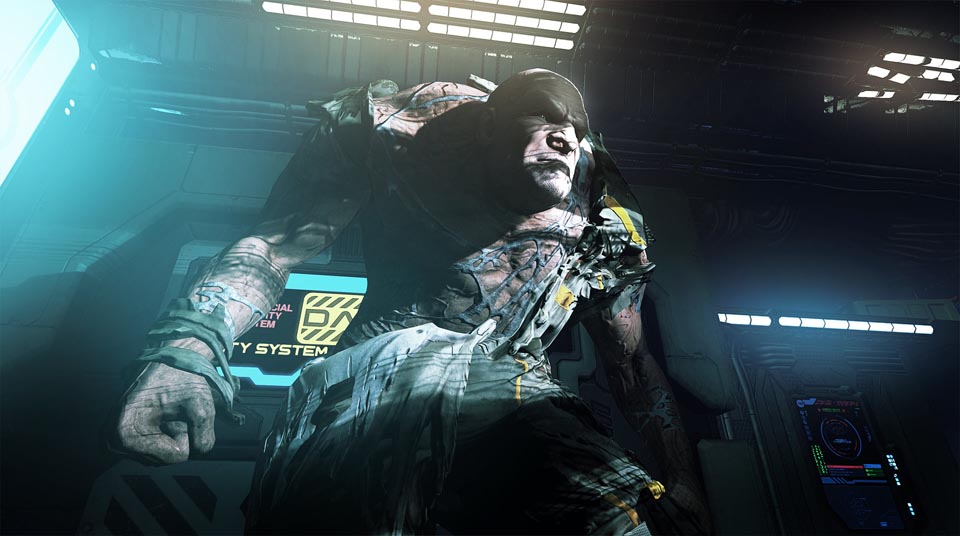 The first time you meet these dudes, you are going to panic!

With 5 levels to get through and death an almost guarantee, especially at the games onset, there is a ton of content to get through.  Each stage has a specific mission needed before you can move on to the next and once you complete that task, expect a big battle.  Stealth may be your greatest ally, but your second most important one is your defenses.  I personally recommend spending everything you have to play around with every item and get familiar with them.  Some only aid in keeping you alive by slowing down time or teleporting you away from a harrowing situation while the weapons are some of the most unique and fun I have seen in a game in a long while.  The gravity gun allows you to grab an enemy and fling them about (or drop them into a pit) and host of other weapons, some classic and some original, offers a plethora of methods to kill your enemies.  My gawd, I had a combat knife as a last defence and wasn’t really to keen on getting close to the clones, but when I started stabbing dudes in all to brief cinematic moments, I was filled with so much glee as I made such short work of those fools in such a gory fashion.  Stem Cells collected can be spent on core abilities; Health, Stealth, Melee damage and few others and regardless of death, you retain these abilities so even if you are terrible, the game accommodates your lack of skill with just making you a bad ass. 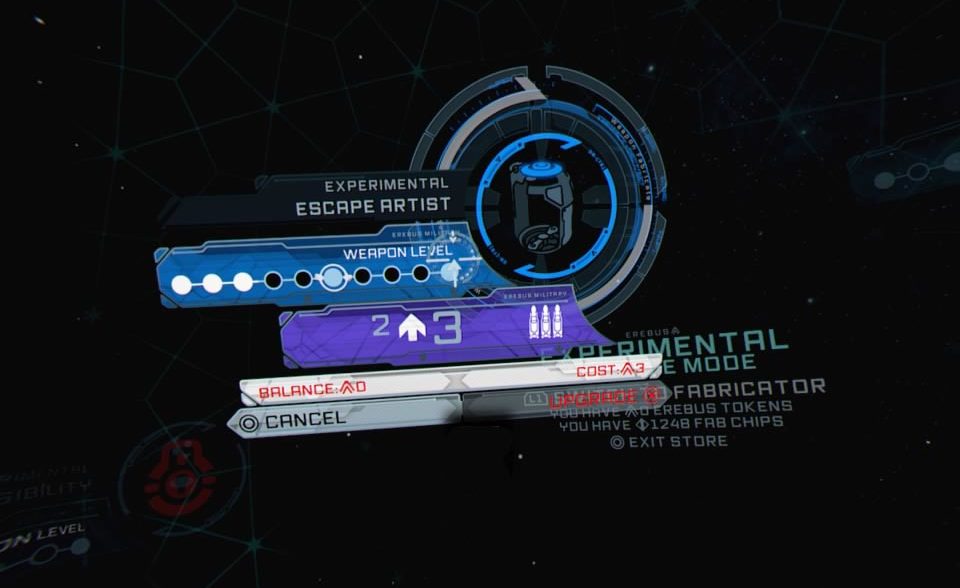 If you see a Retina station, buy something!!!!

There are a few issues but in all honestly, they are very minor. The first is the Rogue-Like element itself, this is a genre with defined rules, but still may annoy people.  There are no checkpoints, and as the level resets every time you die, there is large emphasis on repetition as you get closer and closer to that goal.  Death will plague your initial efforts, but once you figure out exactly what the game is asking of you, it won’t be long until you are a seasoned survival-horror veteran.  As you play the game, the jump-scares, which are scary, become a little predictable and ignorable as room-types begin to become familiar.  Lastly would be the aforementioned lack of hand holding which some may be put off by.  I only mention this as generalization as I personally love the idea of being dumped into the unknown with only my wits to carry me forward, but if you need to be babied in your games, it’s not going too happen here. 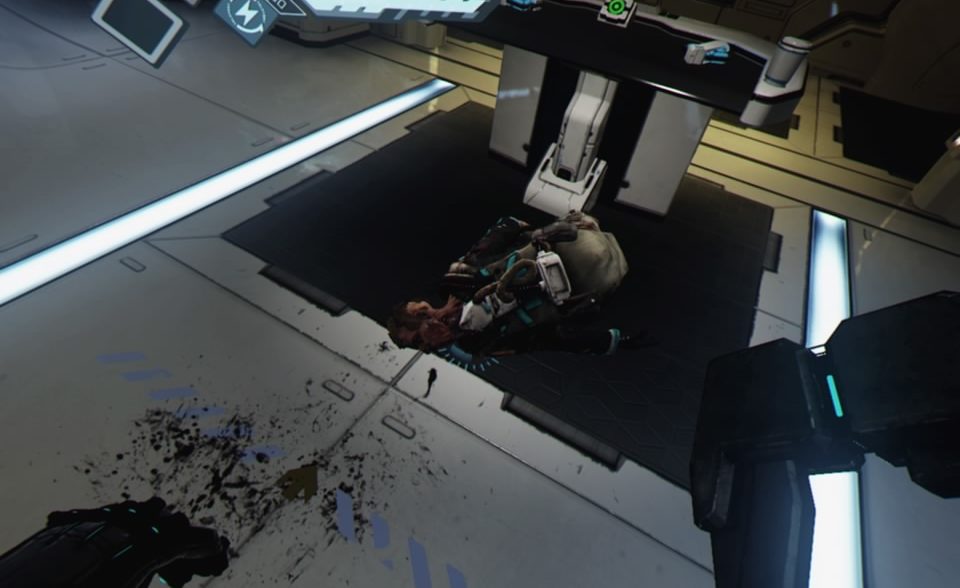 Other things that the Persistence has that I haven’t mentioned yet is the Survival Mode, which is only for lads and lasses who absolutely love the survival aspect of the game as the difficulty gets ramped up to crazy levels.  A companion app is also available for Smartphones that allows you to help the VR player by opening doors, highlighting loot, and directly affecting the enemies by freezing them for a few seconds.  The Mobile player is also rewarded for hindering the VR player by inciting the enemy into action or messing with the lighting.  It’s solid addition that isn’t needed in any way that matters but allows 4 other people to join in on the game.  There are also certain rooms (Medical, Armory) which can offer much needed resources, though the armory tends to have additional challenges required to get that loot.  Schematics can be found that unlock new weapons and abilities and with the game taking upwards of 10 hours or more to beat, The Persistence feels like a fully fleshed out game and is worthy of your time.

What would I pay? The $30 asking price for this is great and if it were even $40, I’d still it’s easily worth it.  The Persistence plays like a well-oiled machine with classic horror elements, jump scares and an emphasis on survival. Add to that the gorgeous visuals, stunning sound design and balanced gameplay and I can’t recommend this enough.

Firesprite Limited provided The VR Grid with a review code for this game and, regardless of this review, we thank them for that!!!