STRIDE has been available in Early Access on the PC side of things for nearly a year and impressed VR users with its immersive Parkour mechanics mixed with some shooter gameplay, not unlike the now classic Mirror’s Edge franchise.  Now, that game has leapt on to the Quest headsets promising an even better experience with some upgrades that haven’t even made it to the PC version, though they are being added fairly soon. 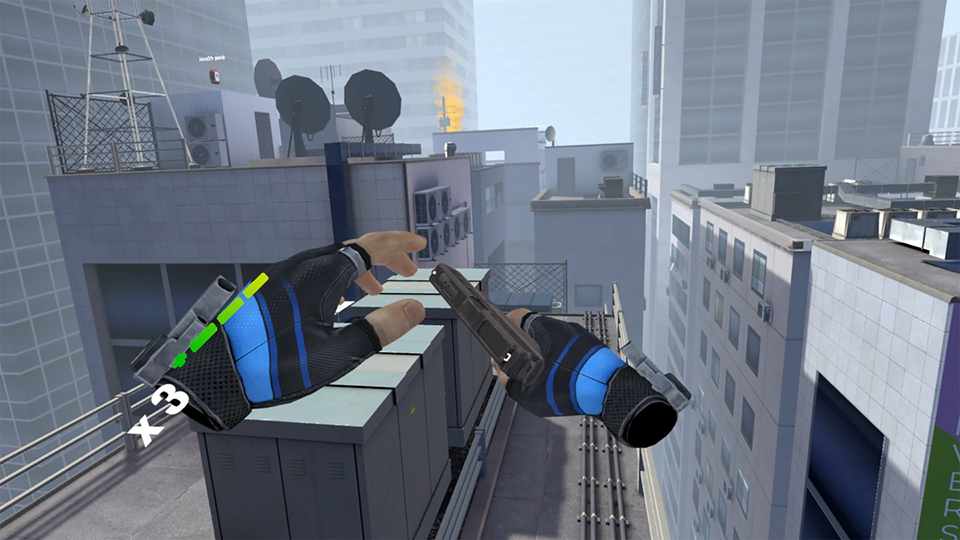 STRIDE is all about smooth movement as you travel from building to building with relative ease though the mechanics in here can be initially daunting with an in-depth tutorial included that breaks down just about everything you need to know.  Your 2 hands can grab edges while pushing a thumbstick up will have you walk forward.  To run, you need to physically mimic that action by pumping your arms in front of you with jumping being handled by a press and release of the ‘A’ button and ducking by actually crouching in your play space.  You can wall walk by jumping at those walls at a roughly 45-degree angle and can even slide down cables and use a grapple gun at specific grapple points to swing over larger gaps Indiana Jones Style.  It sounds simple as I write this, but it did take me upwards of an hour to get moderately comfortable balancing all these mechanics, especially when the clock is ticking, and the pressure is on.  You can play in 3 different modes, Endless, Time Run & Arena with the 1st letting you fight enemies and mess around in an algorithmically created map that pushes you forward while the world dissolves behind you.  Time Run has you trying to get through a bunch of pre-made, ranked obstacle courses in the quickest time with Arena placing you on top of small series of skyscrapers and challenges you to complete a series of objectives that get more difficult the better you get.  Those objectives include navigating to specific waypoints, collecting items, killing soldiers and a few more tasks.  Combat is key with your trusty pistol strapped near your shoulder, easily brandished as snipers and drones try and take you out.  Reloading is handled by dropping your hand to your waist and should you need it, you can slow down time for a few seconds to line up those perfect shots.  You can also find power-ups like extra lives, a machine gun & laser guides which help extend the fun factor and mix up the gameplay.  As I said, it’s a lot to take in, but stay the course and soon enough you’ll be hopping across these cityscapes with ease. 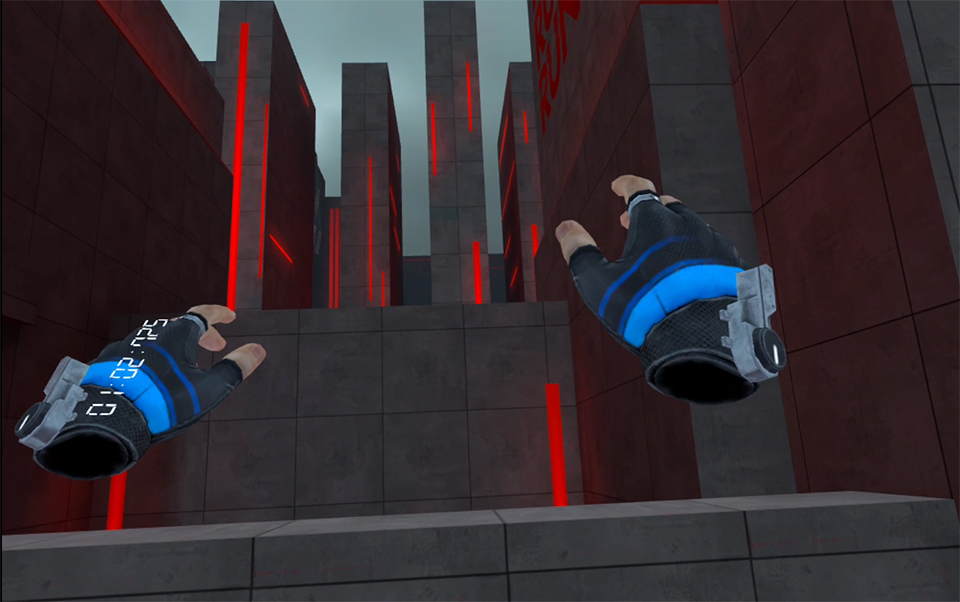 I swear, every jump is a harrowing one!

STRIDE looks solid though relishes in its simplicity as there really isn’t a whole lot going on with some static and procedural courses all comprised of the same environmental objects.  You’ll be cruising across and up rooftops with the city below you disappearing into a white fog that isn’t exactly pretty, but that design choice allows for all the building nearby to be rendered within your sight lines, mitigating any pop-in making for a good looking game as long as you don’t look down.  The landscape is largely different shades of grey as you hop over railings, climb walls, leap over vents and lunge towards the next office tower.  The harder Time Run stages mix up the art style by having you navigate futuristic, near black looking buildings that feel dystopian and match the extra challenge in those races.  In Endless mode, it’s slick to see the world digitally dissolve behind you, and ahead of you if your too slow, and seeing those bricks suddenly turn black is a tell tale sign you need to get your ass in motion.   Bottom line here is what it lacks in visual variety in more than makes up for in thrills with the presentation being realistic enough to make the experience an immersive one.

Each mode has its own music tracks with the Time Run and Endurance having a few, rather passive tunes, while Arena opts for a more intense, old-school soundtrack that feels ripped out of 90’s era action game and, despite the limited number, they fall into the background and let gameplay and visuals do the heavy lifting.  As you fly through the air, you’ll hear the sound of wind blowing past you and the occasional grunts as you land and jump adding to the immersion and not unexpectedly, drones and enemy soldiers spice up the action with their own attacks.  There’s not a lot to talk about on the audio side of things, but what’s here works just fine. 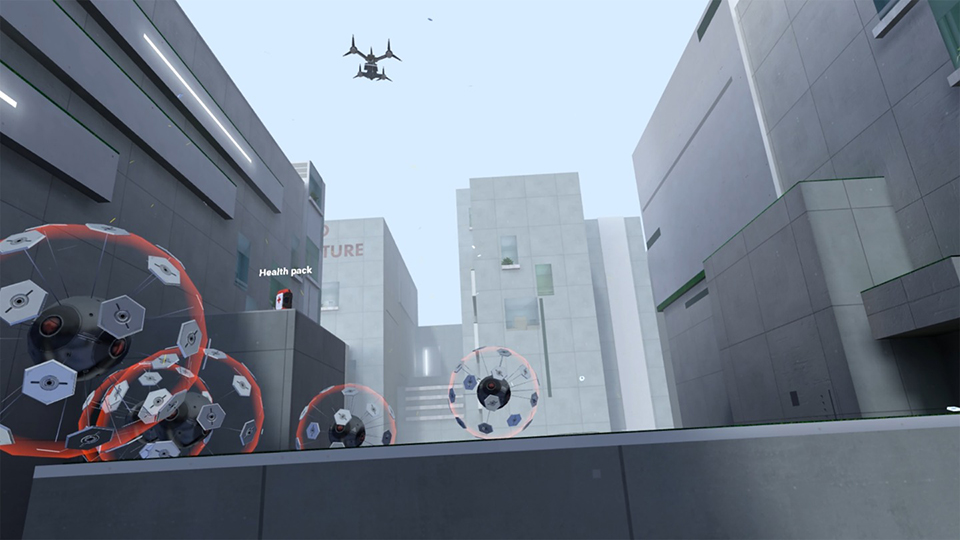 Shoot the drones fast enough and you don’t need to worry about the mines!

I enjoyed my time with STRIDE, but it does feel like it’s missing a very large component in a campaign, which the developers have promised has already been in development for some time and is coming at some point.  The 3 modes of play right now could easily suck up a substantial amount of time for those that want to commit to beating personal bests, climbing leaderboards or just practicing for the campaign’s release, but these modes feel more like extensions of a bigger game and not the main draw, which they currently are.  I don’t mean to slag on the game as it really is a blast to play and the parkour mechanics work way better than I expected them too, making for a title that is nothing short of exhilarating.  It’s clear the developers really care about the gameplay as, once you get good, moving through the environment with epic leaps, wall rides, swings and slides feels almost natural. Those that may be a little more sensitive to sim sickness should be aware that the only real comfort option is click or smooth turning though of course, with the Quest, you can turn in real life. Outside of the games lack of a campaign and smaller scale, there really isn’t much to complain about as even the modes available have a ton of modifiers to further tailor the game to your liking. 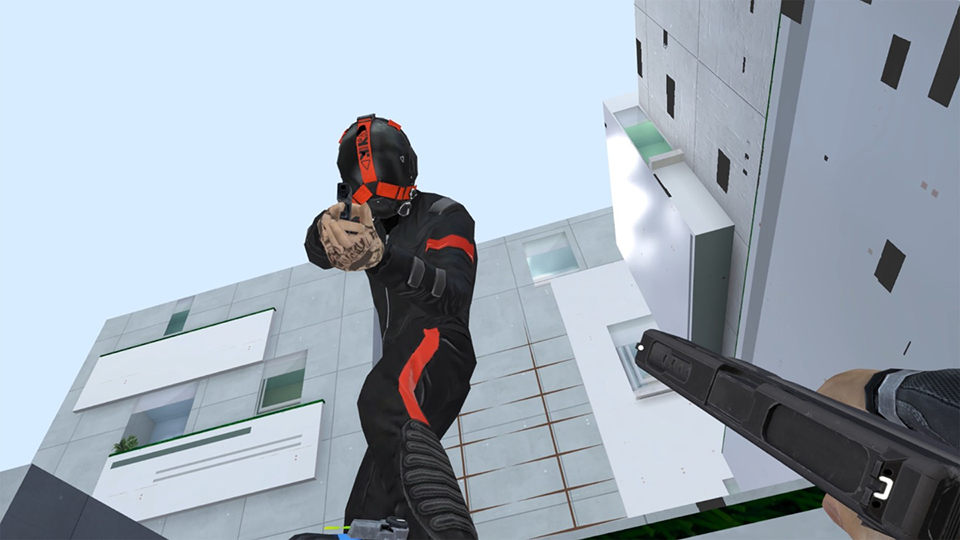 STRIDE kicks ass and is the type of game that could move headsets as it offers somethings we have seen before, but in a package that makes it feel unique as there really is no other game that does what STRIDE does so well.  Those looking for a little more thrill in their VR diet should not look past STRIDE as it’s the kind of game Virtual Reality was meant for.

What would I pay? Priced at a modest $15, that negates my larger complaint of the game lacking a campaign as the current content will easily kill at least a couple of hours thanks to a very high addiction factor.  The fact they are adding not just a campaign, but a multiplayer component as well means there’s a lot more value to come on top of what’s already available.

Joy Way provided The VR Grid with a press code for this title and, regardless of this review, we thank them for that!