Zombies! You’ve gotta love em! Their flesh deprived corpses have always been a big staple of video game shooters.  Who doesn’t love aiming a shotgun at their putrefied heads and capping off a shot just to witness the bloody aftermath and reloading quickly as another willing target shuffles into view?  All of which leads nicely on to Zed Shot, a title which has been created and published by lone developer James Howard, and an entertaining slice of zombie action it is. 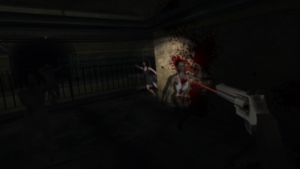 There’s no dramatic story line, no real strategy involved, no RPG elements or upgrading your character’s abilities and experience, it’s basically aim, fire, and repeat! The game consists of 7 stages like a hotel room, laboratory and catacombs; each giving you a variety of weapons to send those rotting zombies back to hell!!  From shotguns to machine guns, but my personal favourite has to be the sniper rifle which unfortunately you only get for one level.

Zed Shot can be played with either a Bluetooth controller, the Gears’ touchpad or the Gear’s touch controller which is highly recommended as the preferred method of play as you dispatch the undead with the laser line of sight from your weapon.  As the title of the game indicates, the idea is to pop the heads of the ever-advancing zombies before they get close enough to munch on your brains!

There’s no character movement involved, instead you are stationary in your level and as you eagerly scan the environment and the zombies entrance points.  Although the game does not rely on jump scares, when those zombies get up close and personal trying to  your face off, well then it gets a little unnverving.  The zombies which first appear in the background are quite blurry and difficult to pinpoint with your laser sight but once up close, the improved clarity of the visuals make them quite an ugly and scary proposition.

Each successful head shot sends a spray of blood on the walls and environment and stay there for a while, it’s a satisfying conclusion to your steady aim and nerve.  The visuals themselves are impressive, the dark grainy locations are realistic and the only light which comes from your weapons cast a creepy glow of those around you.  The sound effects which accompany the game are also very atmospheric with the groans, shuffles and weapon fire sounding beefy enough to be satisfying.  Wearing headphones whilst playing certainly does add a great degree of immersion and ups the fear factor considerably.  My only issue with the firing element was that on a few occasions I had to recalibrate the tracking for the Gear Controller as it was sometimes hard to distinguish where my laser sight was targetting.  A more visual representation of where my gun was aimed at would have been more welcome. 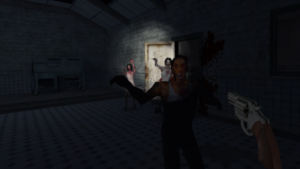 A light switch would be nice!

The 7 stages offered means it’s not a game which you will be playing for a long time.  The first 3 or 4 you should be able to get through on first play with the last few levels proving a bit more difficult but while it lasts its an entertaining, creepy and fun no-nonsense shooter.  Everything being created and developed by just one man is admirable and hats off for producing a quality, eerie experience.

What would I Pay? For $2.99 no one can complain about the entertainment and fun here.  Although it’s a pretty short lived experience, it’s one which will keep me coming back to for a quick spell of zombie head capping!

James Howard provided theVRgrid with a review copy for this title and, regardless of our review, we thank them for that!