The Last Sniper is a WW2-themed wave shooter that has impressively atmospheric visual design, but provides little actual entertainment. With mediocre gun mechanics and brainless enemy AI, this is one of the most boring shooters I’ve played in a while.

Simply put, you’re tasked with shooting countless enemies using a sniper rifle. Seeing as the majority of gameplay centers around sniping, it’s disappointing how badly the rifle handles. You can only hold it in one hand, taking away much of the heavy-feel of carrying a weapon that usually requires two hands. This makes the sniper rifle feel extremely cheap, and it doesn’t help that it has no recoil whatsoever. Your non-dominant hand serves solely to pull back the bolt, doing which feels cheap and unreliable. The only quality thing about shooting is the bullet itself, which travels at a realistic speed and has minimal (but noticeable) bullet-drop. 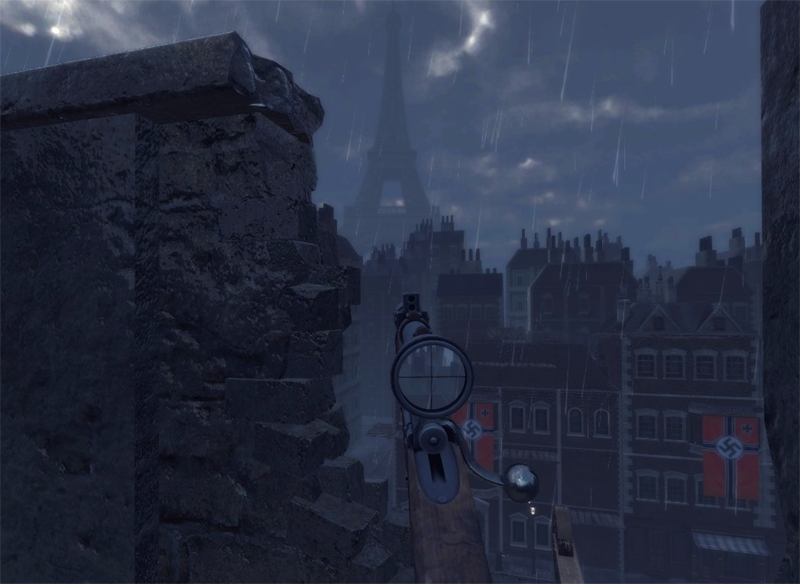 In the game’s first level, you physically jump off a plane as a paratrooper. The graphical design of this scripted sequence is excellent, and I was shocked at how visceral it felt to jump out of a plane. Crashing through the roof of a house and promptly grabbing a conveniently-placed sniper rifle, my expectations were quickly let down. Enemies swarm out of a 180-degree field, taking cover behind boxes and walls. Their AI mainly tells them to stand or crouch in a repetitive cycle, without any strategy or challenge. This makes The Last Sniper feel like a 90’s arcade rail-shooter, but not a fun one.

The second level, set in a well-designed Paris environment, isn’t much different. Enemies move to a small number of fixed locations, where they remain stationed. At the beginning of this level, you bash a German soldier with a rock to steal his rifle. Although his body went flying like a ball of tin foil, throwing rocks at other enemies doesn’t do anything. The Last Sniper is filled with overly-scripted sequences like this. While the aforementioned paratrooping scene was cool at first, these scenes serve as little more than filler for the games meager content value.

There are two other game modes that mix up the gameplay, but aren’t great in their own right. In “Rush,” you play as a German soldier fending off endless, ever-growing waves of enemies in a close-quarters environment. This mode ditches the sniper rifle and gives you two submachine guns and a shotgun, neither of which feel great, but ironically handle better than the sniper rifle. The shotgun must be pumped, the submachine guns are manually reloaded, and both feel decent. The actual gameplay in this mode, however, is mind-numbingly repetitive and generic. 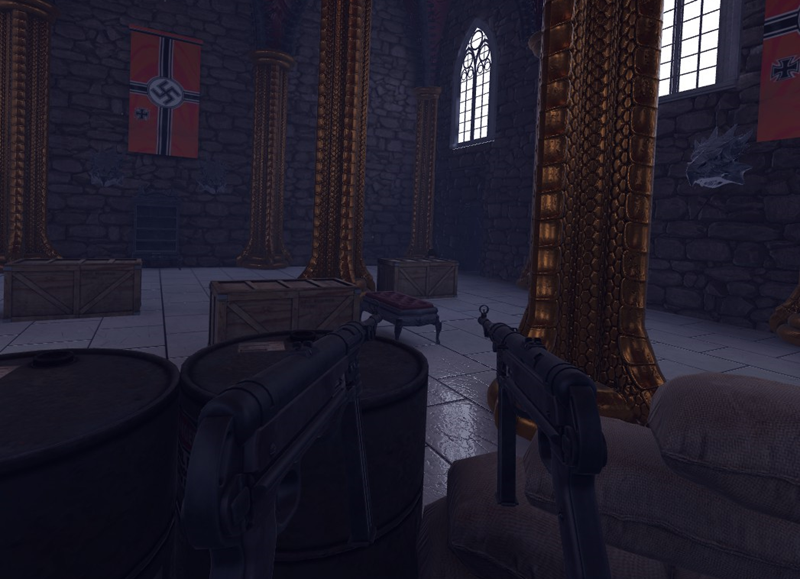 Close-quarters action mixes up the gameplay, but doesn’t improve it

In the “Hunted” mode, you square off with a single sniper, which respawns (on a timer) in various other spots in the map. This mode is incredibly dull, and feels like a multiplayer mode that pits you exclusively against bots.

The full campaign technically has five levels, but I wasn’t able to play three of them. I tried playing every level, multiple times on different difficulty settings, but the latter half of the campaign is simply inaccessible. I think it might be glitched.

Each level in The Last Sniper only lasts about 5-10 minutes. Playing the first two levels, as well as Rush and Hunted many times, I have exactly an hour logged. While it’s possible to squeeze this much gameplay out of it, I got bored after only 20 minutes.

While the graphics in The Last Sniper are visually exceptional, they don’t do much to help. Physics are bizarre and inconsistent- headshotting enemies sends them flying backwards, while rocks don’t even budge when you shoot them. These are the same rocks that, earlier, instant-killed a German soldier by simply touching him. The game’s UI also suffers, with a poorly-made main menu and annoyingly obvious pop-up “tips” (IE: Pull the trigger to fire your weapon).

What would I pay for it?  I bought this for $3 on the Steam autumn sale, figuring it must be worth at least three bucks-  but it wasn’t. A repetitive, boring, and generic mess, I’m convinced that The Last Sniper was mainly intended to show off VR at the dawn of the industry. It delivers the bare minimum, but isn’t entertaining or long enough to be worth your money.