The ArcSlinger was originally a Daydream exclusive title that has since been brought to multiple headsets.  In its original incursion, you played as a space cowboy armed with a sentient pistol, defending against hordes of enemies.  The entirety of the game carries over to the larger headsets, but thanks to having 2 controllers, this is now a dual wielding affair that takes you through a quick campaign to save the planet from the bad guy, Gold Smoke. 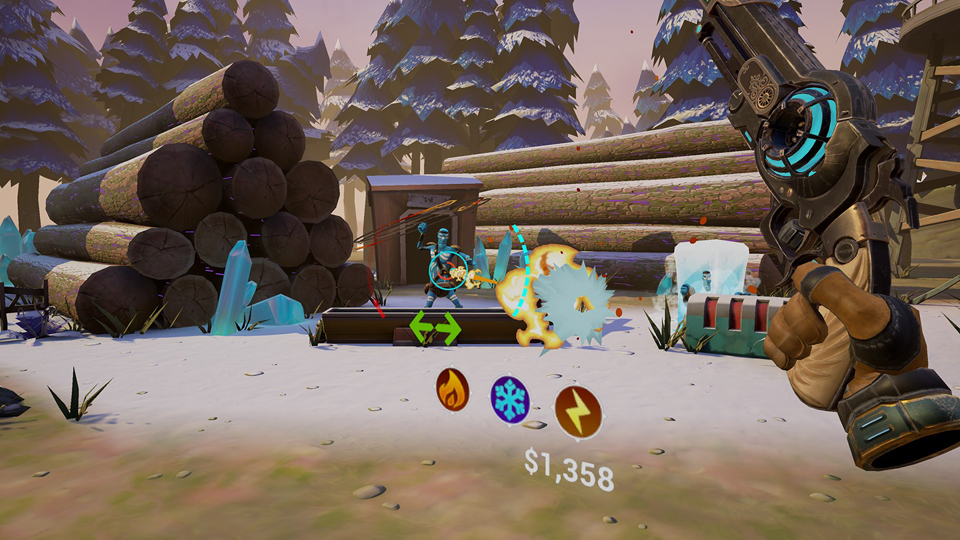 In your left hand is a regular pistol, but in your right is Archangel, a pistol with a sassy attitude that also has a bunch of powers courtesy of the Arc, a ring that surround the planet this game takes place on.  As you progress through the campaign you unlock more abilities for your gun.  You can assign a main buff that is always active on your gun like increased ammo or health, but the fun lies in the gestures you need to make to activate whatever power you have assigned in one of three slots.  Only certain powers can only go in certain slots, indicated by arrows, and to use that power you need to press the lower trigger button and swipe left, right or up to activate that temporary buff.  With these powers you can light baddies on fire, freeze them, absorb some health (my favorite), use lighting, summon shields and a ton more.  The store pages lists that their are dozens which are unlocked through multiple plays and are central in making this game standout against so many other wave shooters.  Each stage has 3 waves with 15 stages in total putting the campaign at somewhere in the hour range, which is short but given the nature of the game, the shorter length is actually appreciated.

The game is very western but with some steampunk elements all with a very cartoonish aesthetic.  Cinematics during the game are nothing more then some still comic-bookesque images with some light animation.  The actual game is very bright and colorful, and all the enemies are very well animated.  As this is an alien world, you’ll be facing people, robots and animal-based aliens all armed to the teeth with a variety of weapons.  Enemies pop up in front of you and too the sides so you need to be constantly looking around as many enemies will hide behind cover both high and low.  Your guns powers are a highlight as they take out enemies in very fun ways and when you activate an arc power, your gun will react accordingly, temporarily representing whatever power you are using.  The stages around you range in size from smaller western towns to some larger exteriors and forest areas and overall, the look of this game is really well-polished and a delight. 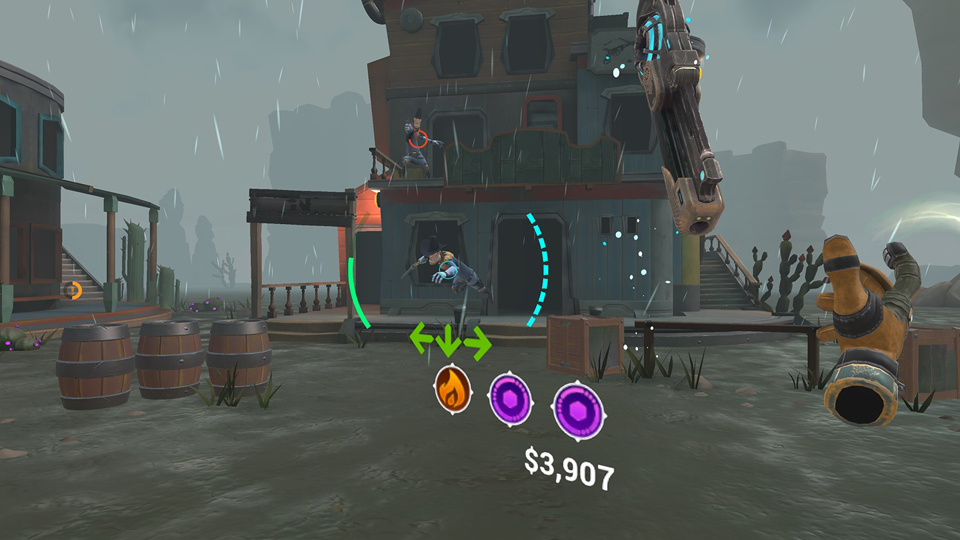 Keep an eye high and low.

There is a lot of talking in The Arcslinger, both during the game and the cut-scenes and what is surprising is the quality of the voice talents present here.  They all deliver great performances with the bulk being between yourself and your gun.  She isn’t happy you are wielding her at the games onset for reasons I won’t ruin here, but she constantly commentates on your actions and rarely, if ever, repeats herself giving that gun more character then anyone else in the story.  Enemies give themselves away by shouting a few lines at you or just making noises with a few environmental objects animating with the appropriate sounds, like a train, and all-in-all, the presentation here is top quality.

All of you guns powers can be upgraded multiple times for increased effectiveness with money accrued throughout the game.  Items scattered around the environment give you more loot, so it’s in your best interest to destroy whatever you can around you while killing the bad guys.  Health drops occur often and as you advance, the game gets harder, so you need to make sure you are upgrading those powers.  If you die you can continue from the last stage or start over from scratch with all the arc powers, you have already unlocked making for an easier time on another go-through.  There are so many arc-powers it can actually be overwhelming as you might find 1 or 2 you prefer but sill have like 20 more options to choose from.  That’s not a bad thing, but even at the time of this review, I haven’t tried every power available as I seem to keep finding more and more of them.  Praise aside, this is still a fairly standard wave-shooter which is why I lauded the shorter length…it’s over before you get sick of it. 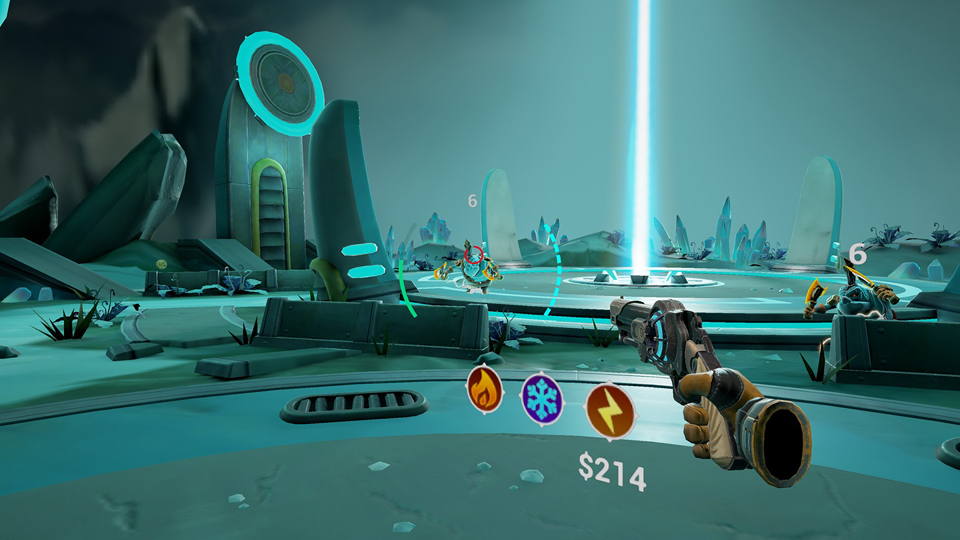 Things get a little more wild then west.

The ArcSlinger never overstays its welcome and offers enough variety to keep the game from never really getting boring.  The stages and waves are so short you always feel like you are moving the story along and while the story isn’t that amazing, the way it’s told with the great performances keeps it very entertaining.  Like I said, this doesn’t do a ton for the genre other then the unique gun powers but if you don’t mind wave shooters, this is fun jaunt in a cool VR world.

What would I pay?  This is $10 on the PC side and well worth that price.  It’s a smaller budget title that delivers with solid wave shooting and top-quality voice acting that kept me entertained from beginning to end.