Virtual Rickality is effectively the first full-feature paid video game released on gaming platforms for the Rick and Morty franchise and is, coincidentally, my favorite show of all time.  I could hardly sit still waiting for this game and neither could many fans with promises of deep interactivity and accuracy to the show.  At its core of design, this is a virtual interactive toybox. This means that you’re put into a room full of gadgets and gizmos and tasked to solve puzzles, and VR is the perfect platform to fully exploit the interactivity of a room. Imagine a sequel to Job Simulator, only a little bit more insane.

Um…Ya know, Rick, I don’t really think he’s getting it!

Set in the garage-based laboratory owned by Rick Sanchez, the show’s interdimensional portal-traveling, whiskey-chugging, grandson-disparaging mad scientist, fans of the show will feel right at home with the familiar scenery. What makes this so special is that every single aspect of the garage is fully interactive. Almost anything you see you can most certainly pick it up and even use it for some actual function. Items that you’d never expect to have any function, such as a crown or a hammer, trigger scripted lines or scenery adjustments that make you think, every few seconds: “Oh snap! I haven’t played with THAT object just yet! It all lends itself to a sense a freedom in a virtual world.

Playing as a clone of Morty, Rick’s grandson and sidekick, the game starts out with Rick demanding you do his laundry and subsequently berating you for not finishing it fast enough. He then leaves with Morty to go on adventures that leave you feeling an intentionally-ironic sense of jealousy. Rick soon contacts you via holo-watch to assign you more mundane and loosely-relevant tasks that become funnier, and more over-the-top, as you progress through the game.

Unfortunately, this sets a high standard and once the game is 50-75% completed, the script writers got somewhat lazy and inserted lines they likely thought would be hilarious but fell flat.  It can be frustrating at best, and cringe-worthy at worst, when you’re expecting something funny but something is said that feels like it should be funnier than it is. Still, its’ comedy value still far surpasses most other “comedy” titles.  Rick and Morty delivers an extremely niche brand of comedy that I’d call “slapstick nihilism,” which is well represented in the game.

One team working on the title with Owlchemy Labs- Squanchtendo Games- is co-led by Justin Roiland. Roiland is both a co-founder for Rick and Morty and a voice actor for many of its lead character, including both Rick and Morty. I would describe Virtual Rickality as a playable half-episode for the show itself as it feels highly accurate and authentic to what I’d hope for from the series. It’s almost euphoric, as a fan, to be physically standing in front of and interacting with these characters. Playing this game literally feels as if you’re in the show and I can almost promise that fans will not be disappointed.

But what about VR gamers who aren’t already fans of the show?

Well, you’ll either become a new fan of the show upon discovering its niche brand of comedy, or you simply won’t enjoy the story. Although it’s a great story in the context a Rick and Morty episode, it’s not a great story as an independent game experience and risks alienating people who don’t enjoy the show’s style. 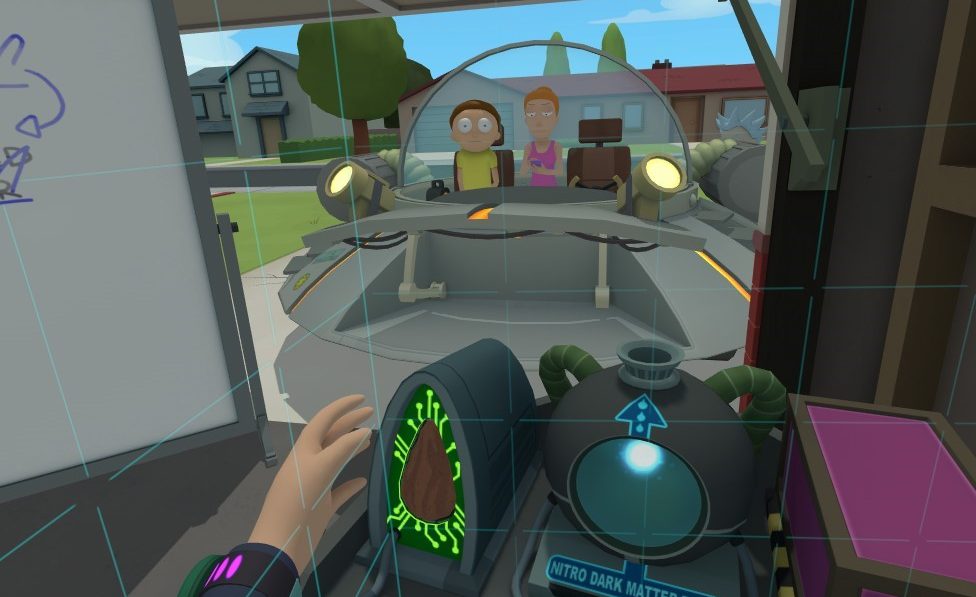 Rick-appeasing tasks include repairing his car. Morty is still stunned to see it being done by a clone of himself.

As a freely interactive toybox, the gameplay in Virtual Rickality is straightforward enough. Move your hands to objects you want to play with. Throw things. Smack things into each other. Break stuff. Annoy people. You’re placed in Rick’s garage, with two floating hands in lieu of controllers. Although the game yields totally interactive freedom, Rick assigns you several narrative-driven missions that can be completed at your leisure. There are also three mini-games that can be unlocked during the story and subsequently played whenever you want. Each mini-game is wildly different, and stands on their own separate merits referencing classic moments from episodes.

The Microverse Battery: In this mini-game, you essentially suck the power from a microverse into a battery.  Switches, buttons, levers and fuses before you light up in patterns that indicate where you have to move them. It’s as rudimentary as it gets; a purple light appears next to a switch, and you pull it to align with the light. This starts out basic and tedious, but quickly becomes hectic and challenging.  It makes you feel as if you’re a mad scientist frantically pushing buttons to disable an alien device from exploding, though repetition soon rears it’s head. Still, it’s satisfying and challenging enough to stay fun for a while.

Troy: This is a “cheap knockoff” of the life-sim game Roy, featured in a TV episode. You’re presented with a series of life choices, enabled by picking up one of a few things in front of you. The choices you make at one point in your life drastically alter your future experiences. You attain a high score based on your “Troy’s” life longevity and responsibility of the choices you make. Once you’ve seen all the wider lifestyle options, though, you’ve pretty much experienced all “Troy” has to offer. Each play-through only takes five minutes or so, and the lack of depth takes away any sense of pressure to make proper lifestyle choices.

Shooting Bureaucrats: Not only is this undoubtedly the best of the minigames, this one is so good that it actually increases the game’s overall value. You get to don an exo-suit with two machine guns replacing your arms and fend off against waves of bureaucratic aliens.  You must duck, dodge, and weave past their bullets while shooting back at them all while your shots shred through enemies, dismembering them and eliciting yelps of pain and gushing blood. It feels like a much more bare-bones version of Space Pirate Trainer, albeit repetitive and simplistic (only one weapon, one enemy type, one environment, and no variation whatsoever). Simply due to how amazing the shooting feels, this minigame is stellar and is possibly one of the biggest things that attracts me to Virtual Rickality time and time again.

Unfortunately, these are the only three minigames present though they all have a high score counter, motivating you to come back and revisit them on occasion. While everything in the garage is fully interactive, these are the only aspects of the game that feel worth coming back to after you’ve experienced everything else.

With satisfying crunching and popping sounds, and a beautifully trippy alien world, this shooting segment is one of the most fun and satisfying experiences in the game.

Compared to most VR games, let alone show-licensed games in general, the content in the game is impressive. I currently have nearly 9 hours logged into the game, none of which felt contrived. Its content shines if you take your sweet time and appreciate the toybox aspect of the garage, but the lack of a longer storyline has me somewhat disappointed.

That being said, I’m still not bored with it. I still plan on playing much, much more. Although not a ton of content, what is here is incredibly fun and works well. On the first playthrough, the amount of content is surprisingly satisfying and a must play for fans of the show!

What would I pay? $30! As a fan, this is absolutely worth the asking price and will entertain for hours. For those unfamiliar though it may be best to wait for a sale.

Adult Swim Game provided theVRgrid with a review copy of this game and, regardless of this review, we thank them for that!