Who wants to visit a virtual theme park?  These game types have been around for ages though VR adds a nice spin by putting you “in the park”.  Whether it’s rides, mini-games or cinematic experiences, it’s always better to be there and Summer Funland aims to deliver a fantastic park with a host of attractions that should appeal to a broad audience. 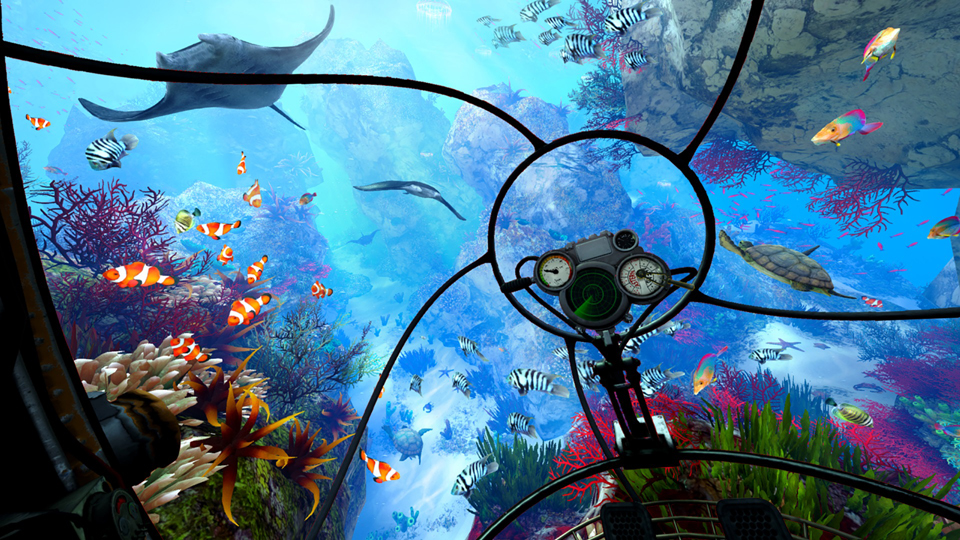 The ‘ride’ attractions are all pretty decent!

You need 2 move controllers for this one and as soon as the game starts, you are asked which locomotion mode you would prefer; seated or standing, with standing have a few control options.  No matter which mode you pick though, click-turning is the only way you can spin around though you can choose between teleporting or smooth loco and while the smooth movement is slow, a double tap of the Move button will have you cruising through the park at a brisk pace.  Otherwise, the controls are mini-game specific like using your hands to hold guns, mallets, a lance or just use your hands to grab and toss items, climb walls or mess with a (sort-of) laser as you guide its beam through a small maze.  You can walk to each attraction or just select them from an info stand at the front of the park with each attraction typically taking no more then a few minutes. 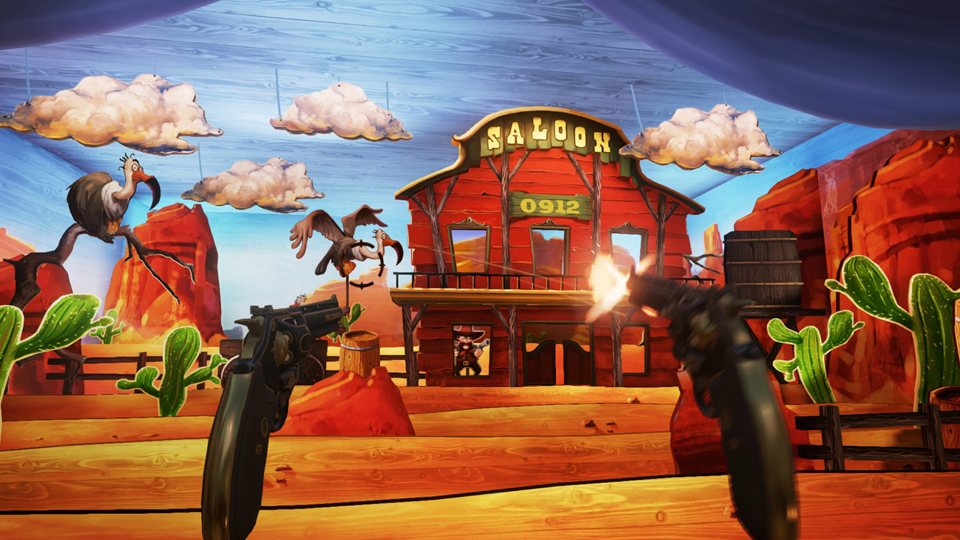 All your stock carnival mini-games are here!

Summer Funland look really good at times with its bright color palette and attention to detail in regard to the parks design.  It’s feels lively with some alright looking people walking or playing around near attractions.  Each attraction, for the most part, offers a unique experience with special care being taken on the virtual rides.  The rollercoaster climbs to dizzying heights and has a few loops as well though unfortunately runs a little to slow to maximize the thrill and comes with forced blinders.  An underwater submarine voyage is impressive as is the Gotham ride which has you riding through Gotham city on a motorcycle that looks suspiciously like it belongs in the DC universe.  I don’t understand how the devs got away with such a blatant rip-off of Batman, but the experience offers some speedy moments and thrills, though is a bit short.  Otherwise there are some good-looking gaming moments with you taking a balloon ride over the park or chopping up soup ingredients in Fruit Ninja clone game with a standout being a very trippy horseback ride through a Neon colored tunnel.  I will say that I don’t think Summer Funland benefits from PS4 pro optimization as the game did have a fair amount of pop-in and some blurriness if anything wasn’t really close to you, akin to what we see in Firewall.  Still, I thought overall this looked decent.

Thematic music accompanies each attraction and fits great with whatever it is you are doing.  There is a brick-breaker game in here that arms with 2 paddles that is very reminiscent of Proton Pulse but has a kick-ass 80’s action theme that I absolutely dug.  Everything works in the audio department with most sounds being very upbeat and happy. 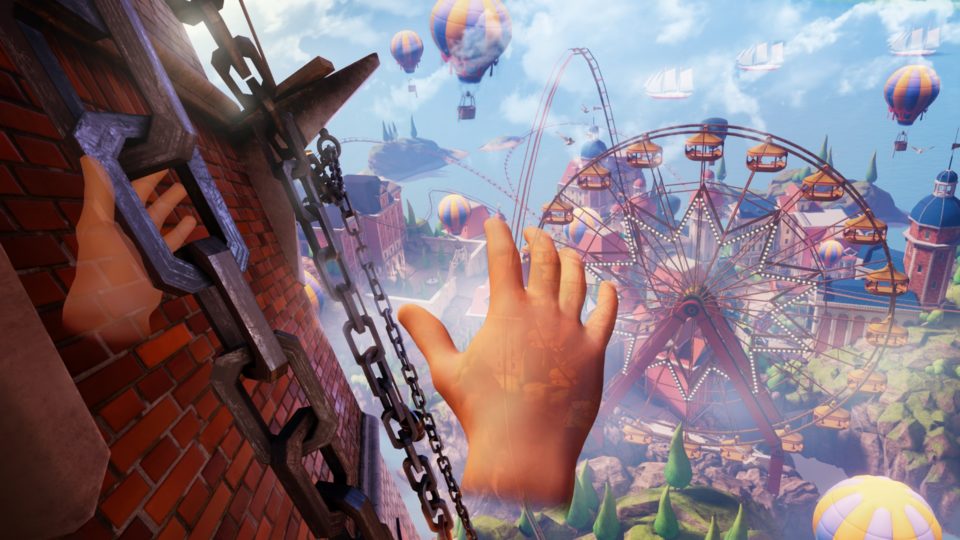 The climbing has you scaling a lighthouse to crazy heights.

Summer Funland has a few highlight moments and besides just trying out every experience or game, there are a few bonus objectives as well.  All the mini-games keep track of your highest score so should you want to, there is always a reason to revisit them to try and beat your previous best.  Unfortunately, there are no online leaderboards which does feel like a misstep as it would have been great to see where I lie in comparison to my friends. The physics in this game are also not that great as throwing objects was a gamble as to where they would actually go, and the laser maze requires very precise movements with the Move controllers which seemed to be asking a little too much from the tech as minor drift issues made these very challenging.   There are 12 stars you need to open the mysterious gates with all but one of those stars being tied to getting above a certain score in some of the games.  The last star requires you to find 8 plush monsters hidden throughout the park and when you get all 12 stars, walking through those massive gates changes the Theme park from a day setting to a night giving a new look to some of the attractions that keep you in the park.  Most of the games that require stars can be conquered in 1 or 2 attempts with only 1 or 2 of them offering any significant challenge.  In fact, every attraction in here is pretty much a one-and-done experience as they are fun the 1st time but are just the same thing over and over making this a great show piece for friends and family more then anything else. 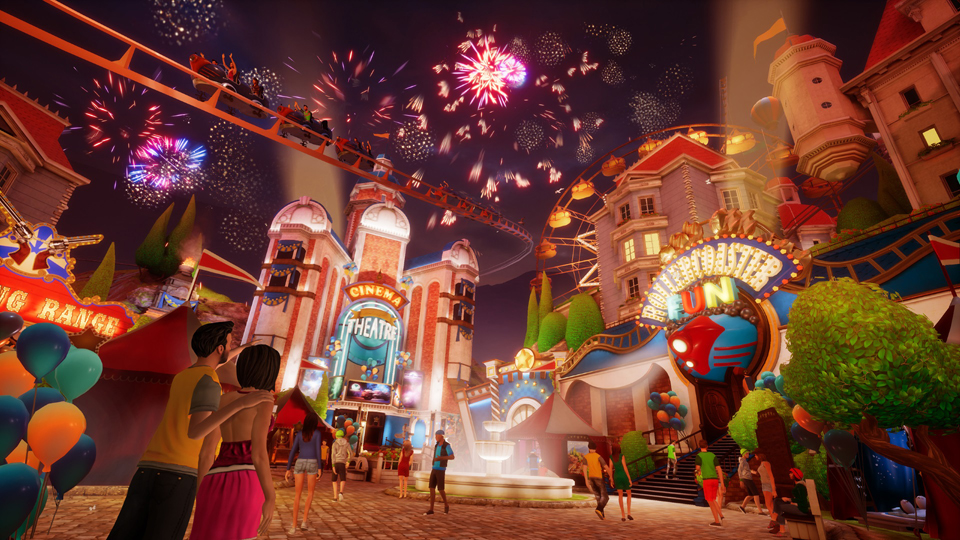 Changing from day to night is actually sweet

I enjoyed the 2-hours I spent in Summer Funland as each attraction kept the game feeling fresh until I had run thorough them all.  With that said, I have little to no desire to play through this again but do plan on demoing it to others.  Almost every attraction works as it is supposed to and when compared to our other mini-games collections, I would say the ones in Summer Funland work better then the others be it climbing, shooting, or whacking Penguins.  If you liked Pierhead Arcade or Carnival Games, then this is better then either of those 2 ventures and if you demo VR stuff to your guests then I’d say this is worth a look.

What would I pay?  I think the $20 asking price is right on point for this one.  It’s not going to blow you away, but it is a solid collection of games and experiences that look and sound good and work like they are supposed to, which is a dumb thing t say, but many of these mini-game collections have a fair bit of jank that Summer Funland just doesn’t have.

Monad Rock provided The VR Grid with a press code for this title and, regardless of this review, we thank them for that!