Copper Canyon is wave shooter set in a Wild West world overrun by robots and it’s up to you to get rid of them before they do whatever dastardly thing it is that cowboy robots do. 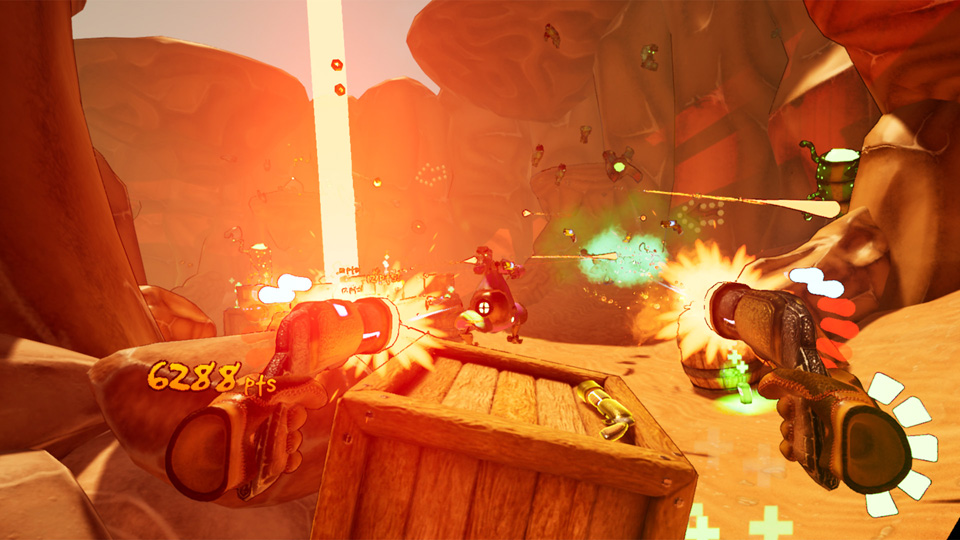 It’s time to get your shoot on.

This is a dual-wielding shooter, so you are going to need a couple of Move controllers to shoot your way through the 3 stages available.  Once you grab the guns at your hips, you can reload them by simply lowering them near your hips and waiting for the ‘reload noise’ signifying they are good to go.  Enemies teleport in all around you and while they move to your location quickly, you can teleport around the map allowing you to escape dire situations.  When you teleport, time slows down allowing you to not only get your bearings but choose which direction you’ll be facing when you move by twisting your Move controller and looking for the direction the arrow is facing around your landing point.  The action gets very frenetic with snipers, gunmen and dudes who explode all doing their best to overwhelm and kill you.  Health is scattered around the map and can be shot or picked up as well as errant shotguns, which I never used as they fire too slow and the bullet spread made them unwieldy compared to the much more accurate and faster pistols.  Each stage is broken up by checkpoints and should you die, you’ll start back at that checkpoint.  Getting to the end of stage has you facing a larger boss who uses his own tactics to thwart you and gets more powerful each time you face him.

The game looks good with nice western look and steam punk charm.  Everything is cartoonish and exaggerated and looks pretty crisp in the headset thanks to the cell shaded art-style.  Typical of the west, you’ll visit shanty towns and mines with each offering tons of environmental cover as you move from battle zone to battle zone.  Enemies teleport in with a bright beam of light, letting you know of their location and bullets come at you at a slower speed, but in such number, they are still very much a threat.  The environments range in size from narrow caverns and town streets to open areas littered with rocks, barrels and other items you can use for cover.   The same enemies show up from the 1st stage to the last which is a little disappointing as that makes each stage feel similar though a few areas throw a ton of guys your way forcing you to be on your toes. 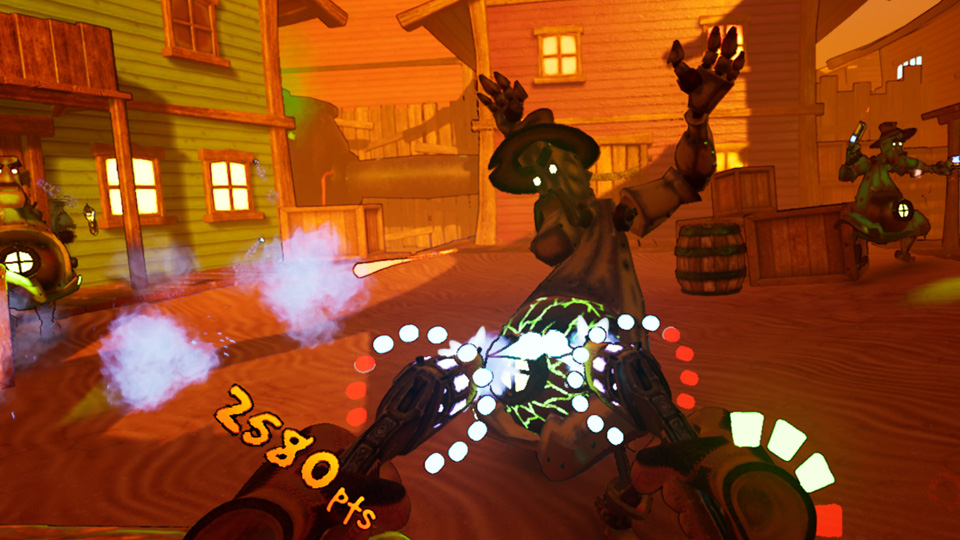 Audio boils down to western-themed background music and effects that match the action.  Robots make all manner of mechanical noise as they come at you and die with guns, explosions and all the effects sounding exactly as they should, making for a relatively seamless experience.  Some spatial audio help determine where foes may be coming from with the overall presentation package being better than I expected.

The 3 stages can be breezed through in roughly an hour or so depending upon your skills and each stage has a 3-star ranking based upon the speed at which you best that stage and the amount of times you die in it.  You face the same boss at the end of each stage, though it does throw a new attack your way each time you face him, but he never offers much challenge.  The action is frenetic for sure and while the game encourages you to travel around each arena to stay safe, I found the teleportation system to clunky to be effective and ended up finding vantage points where I had decent cover and a view of health bottles should I need them.  Your score is tallied as well so if you wanted to dive back in you can try and beat your previous efforts but in all honesty, this is a one-and-done shooter experience. 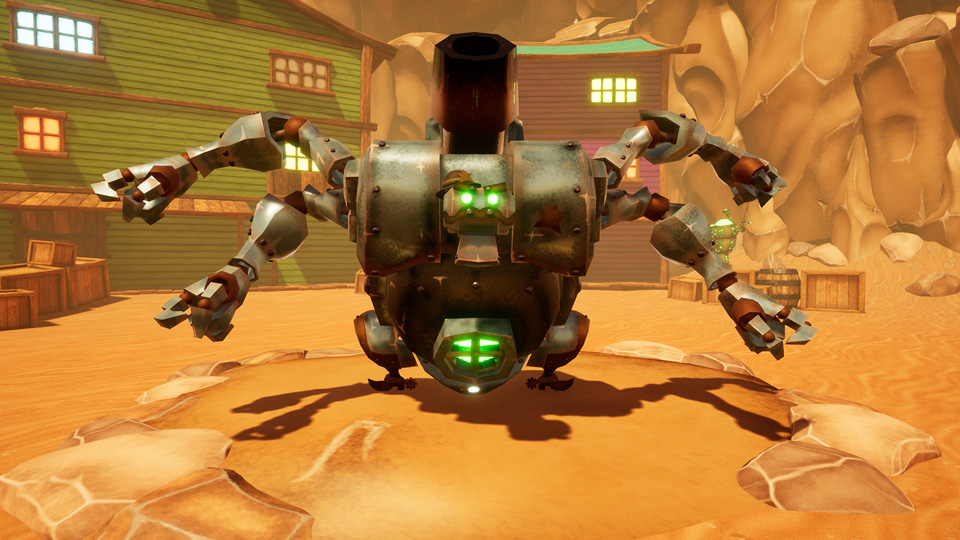 The boss fight offers its own unique challenges.

The Copper Canyon Shootout is a perfectly fine wave shooter that never gets out of line.  Get in, shoot some robots, shoot a bigger robot, rinse and repeat.  By no means is it bad with solid gunplay, hectic fights even though I wasn’t a fan of the movement, it’s not stationary putting ahead of some of its competition.  If you’re looking for an intense wave shooter with a focus on the action and little else, then The Copper Canyon Shootout comes easy to recommend.

What would I pay?  This is roughly $10 and that price is perfectly fine.  It was entertaining, had some challenging moments and looks pretty good in the headset.  That said, it still feels like another wave shooter and if you are sick of the genre, I doubt this will remedy that thinking.

Black Dragon Studios provided The VR Grid with a press code for this title and, regardless of this review, we thank them for that!