For those unaware, Crisis VRigade came out all the way back in 2018 to little fan fair but garnered praise and a growing following thanks to its unapologetic difficulty and throwback mechanics similiar to arcade light-gun shooters from yester-year.   In truth, I’ve had a love hate relationship with that game thanks in large part to its unrelenting challenge and initial progression blocked level unlock system which, for someone with my lacking skills, prevented me from playing the latter 2 released stages though thankfully, as that games stands today, it’s the best its ever been and one of my favorite VR games.  Crisis VRigade 2 looks to expand upon that 1st title with improved presentation and a few more minor tweaks that hammer home the old saying ‘ if ain’t broke, don’t fix it’. 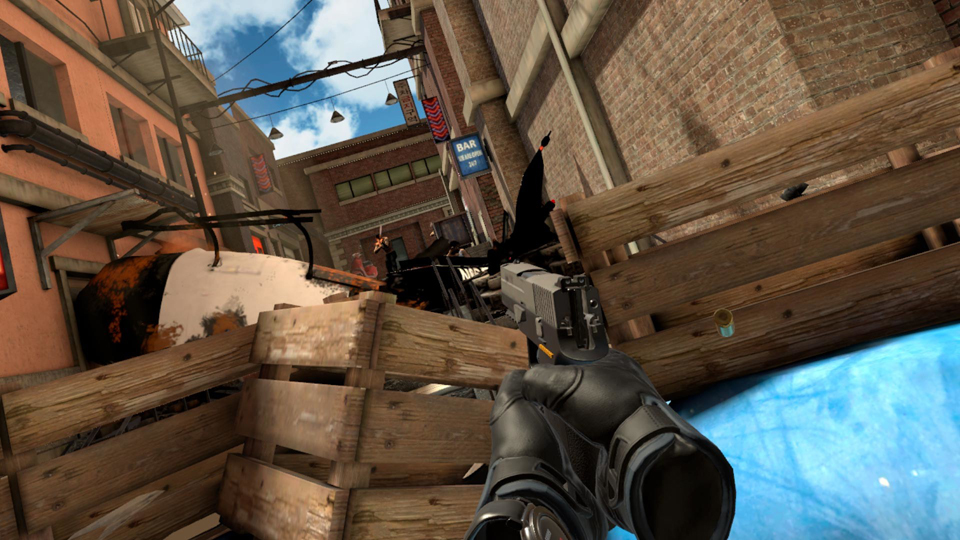 For those unaware, you play as a member of the SWAT team, responding to some type of crisis and it’s up to you to cut a path of destruction through all the gang-bangers and terrorists in your way to get to the end of each level in less then 7 minutes.  This 7-minute timed mechanic is the exact same as the first game as is the gameplay, including multiple paths through each level.    You are automatically placed in cover at the onset of each mission and must physically duck and hide behind whatever it is in front of you.  With the Tracked Motion controllers/Moves, you are armed with a pistol and must semi-realistically reload your weapons using ammo on your belt to keep yourself in the fight.  Enemies are typically stationary though some will advance on your position so hide for too long and you may take unnecessary damage.  Power-ups pop-up throughout the stage, dropped randomly after you kill your foes, giving you more powerful weapons like machine guns though could just give you some health, reinforcements or slow down time.     The Aim and DS4 are supported on the PlayStation side of things, with the DS4 working, but being the worst way to play thanks to the limited lightbar tracking and awkward way it feels in your hands.  The standout control type, once again, is the Aim controller which across PC or PS is my favorite way to play this series of games.  With the Aim, instead of a pistol you now have a rifle with reloads now being mapped to a single button press, which some may say takes away from the immersion, but seeing as how I’m holding a rifle peripheral IRL, I’ll take that trade.  The final addition to this series is the store, which let’s you spend money earned throughout each play on temporary buffs like extra lives, better guns, laser sights and so on with those extras only being active in your next stage attempt.  Skins are also available for permanent purchase with ‘Hell’ mode also being unlocked once you beat all 3 stages and doesn’t allow for much in the way of error in any given stage and is definitely geared towards those who love excessive challenge or chasing trophies. 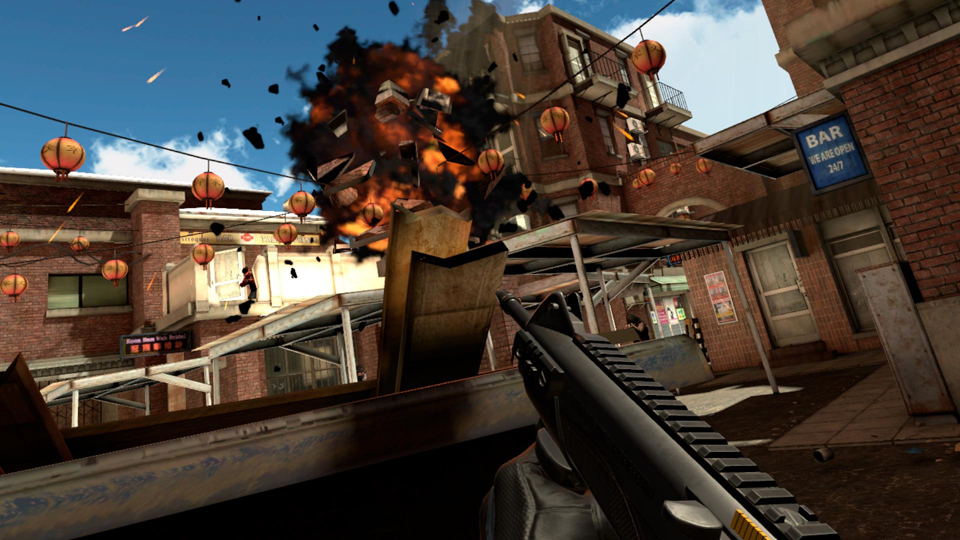 Watch out for Rocket launchers

While the gameplay remains largely intact from the 1st game, the visuals have been overhauled and gone are the cartoonish NPC’s and simple textured environments.  Now everything looks much more realistic and frankly put, better.  The set pieces are more dynamic and, in some cases,, interactive, like when you are fighting in the subway tunnels and need to avoid passing trains, with almost every moment of this game being totally over the top.  Enemies will be all around you, behind cover nearby or in an apartment window and come in large numbers so yuo can never relax.  Ragdoll physics are hilariously at play with enemies crumbling all around you, sometimes flying over balconies or just collapsing in awkward poses and as you pass each section of a level, you can take a moment or 2 to survey all the carnage around you.  The guns you wield also look highly detailed with explosions and other fun encounters looking very cinematic.  Unfortunately, when you move from cover to cover, the teleport only cut-scenes still connect each encounter, which is fine I guess, but I would have loved to see to some full motion cinematics as you and your squad members move up on your next batch of baddies and take cover.  Still, when it’s all said and done, Crisis VRigade 2, as far as visual presentation goes, is much improved over the original.

As far as sound goes, it’s insane and awesome when you are in the middle of a fire fight with bullets flying around everywhere and impacting all around you.  An odd choice, at the time of this review anyways, is that a bulk of, if not all of the original music and the commanding officer’s one-liners have been recycled in this sequel.  It’s not awful by any stretch, and I even enjoy his calm and demeaning tone, but hearing only the exact same quotes from the 1st game as well the soundtrack is a little disappointing.  Also, some of the ambient audio sounds intrusive and misplaced, but you only really notice that when the gunfire stops for a few seconds. 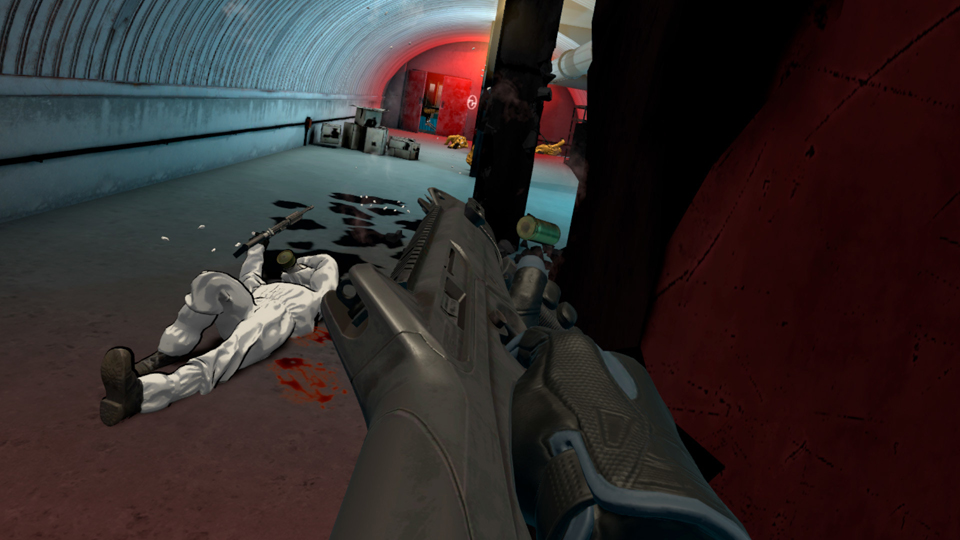 Firing around corners like this is why VR is so awesome!

Fans of the 1st game will enjoy this and for those who struggled with the 1st title, the base difficulty is challenging, but do-able and with the extra modifiers you can purchase as well as paying to continue from where you died, if you have enough coin, ensures that more casual players can enjoy this.   As I mentioned, Hell Mode is available for those that fell in love with the 1st games unrelenting challenge and with each stage having leaderboards with everything from accuracy to ammo wasted impacting your score, their is plenty of reason to try and try again, especially when each stage won’t take longer than 7 minutes.   It should be noted that the multiplayer mode available in the 1st game is still listed as coming soon on either platform so those looking to hook up with a friend might have to wait a few months before they can play with others and the developers are expecting to tweak the game further as time goes on, which is how they handled the 1st game as well. 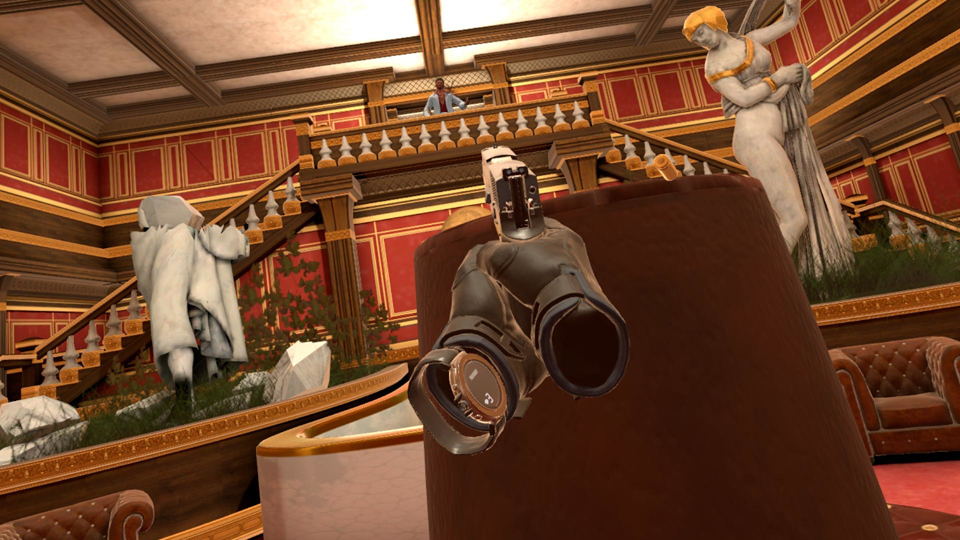 The boss battles are a nice treat!

Crisis VRigade 2 is great fun and fans of the 1st will absolutely eat this up.  The amount of challenge and just how fast-paced everything is, including how easy it is to jump back in for another go, makes it ideal to keep playing ‘just one more time’ in the hopes of beating a stage or besting your previous score.  I think Suma lab has hit a wonderful balance between gearing this towards more casual players but still having that challenge that made this a hit with the more hardcore of us.  I am having a ton of fun being a part of some of the most intense gun-fights available in virtual reality and I can’t wait to tackle these stages with friends.

What would I pay?  Crisis VRigade 2 is $20 US which I think is worth it IF the game had the multiplayer.  I don’t doubt that it will be coming sooner then later so those who invest in this title now can get some practice in for when you can play with friends.  If you don’t care about the multiplayer though, then maybe wait for a sale as it’s really fun, but relies largely on replaying the same 3 stages over and over.

Suma Lab provided The VR Grid with press codes for this title and, regardless of this review, we thank them for that!