Under Pressure is not a sequel to the 1st Angry Birds VR game released earlier this year, nor is a game like any others previously released in the franchise.  This is a tie-in to the sequel to the 2016 movie and while this game does feature some birds, some pigs and a sling shot, it instead is built for local co-op play with the VR player acting as the pig captain of a submarine while your couch-sitting friends play on the TV as the birds and help manage all the machines and resources on the sub. 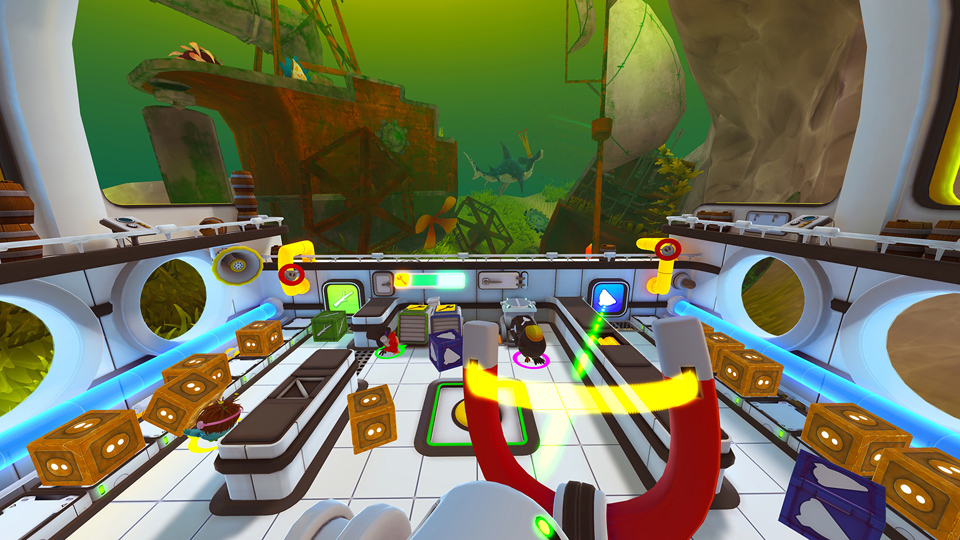 Like no other Angry Birds game you have ever played.

Whether you are the VR player or not, the DS4 controller is used with the VR player’s DS4 being tracked as you aim a slingshot in and outside of your submarine.  Sitting up on high, you can see the ship below you where the birds run around and can see outside of the ship in front of you, showing you the treasure chests that you need to bring on board and obstacles that need to be destroyed lest your ship take damage.  Every stage of the campaign expands upon the base principles of the first stage and how this goes is that the birds on the floor need to activate machines to produce items necessary to create ammo; plungers or rockets.  The plungers are used to grab those chests outside your ship and bring them on board whereupon you are given loot, scrap, TNT or an assortment of other blocks that can be used for a few different purposes.  Scrap and TNT must be disposed of in an incinerator in every stage with loot needing to be placed in loot slots to count toward your end score.  Machines that could be around each stage include the ammo making machines, buttons to give you the items needed to make said ammo, machines that can press 2 of the same loot types into 1 more valuable piece of treasure as well as a random machine that spits out any of the block in no particular order.  The main campaign consists of 10 stages of ever-increasing difficulty with 3 other challenge modes available that mix up the gameplay and also get progressively more difficult.  This can be played by yourself as the VR player with you swapping between positions, which is required as there are certain actions and items that only one or the other can perform or touch. The birds control like a typical 3rd person platformer allowing you to run and jump around to grab and throw objects. 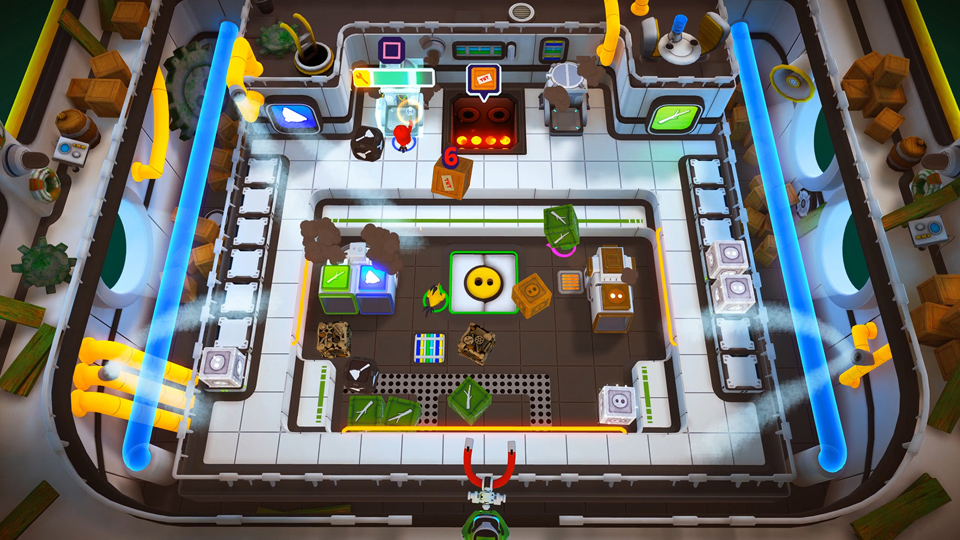 Couch players only get a view of the sub’s interior.

Under Pressure look alright though I was expecting a little more out of this licensed game.  You are greeted with the trailer for the movie and when you start the game you are treated to some snippets from the movie as well that explain why exactly you are commanding this underwater ship.  The VR player get’s a Captain first-person view of the ship with everything looking like it was taken directly from the film, as it should.  Of course, the game looks cartoonish and animates well enough with the a bulk of the VR action happening on your viewing window, which may have you driving along the seabed or through ruins as you come across whales, fish, a crown stealing shark and other wildlife.  The ship thankfully steers on its own so you can focus on all the multitasking ahead of you.  Obstacles that your ship can collide with like rock walls or tentacles will raise alarms when you approach them with explosions from those impacts or the explosive boxes causing ship wide damage that is indicated by busted machines spewing smoke that need to be fixed by the birds.  The non-VR players get a top-down view of the ship and only see icons and prompts indicating what the VR player is seeing and doing, meaning communication is the key for success.  Every time a new mechanic is introduced you are treated to a picture explaining how it works and completion of a campaign stage shows a 1-page comic detailing the events afterwards.

I was disappointed by the audio presentation which just seemed lacking.  A familiar tune plays over the game with the music changing during the last 30 seconds of stage.  All the sound effects of the ship are alright, but everything before and after left me wanting.   Each storied stage opens with text bubbles of a character speaking with no verbal audio save for a grunt from whomever is talking.  As a tie-in to a movie, I would have liked a little more in these areas but in no way does it wreck the game and overall the presentation is solid. 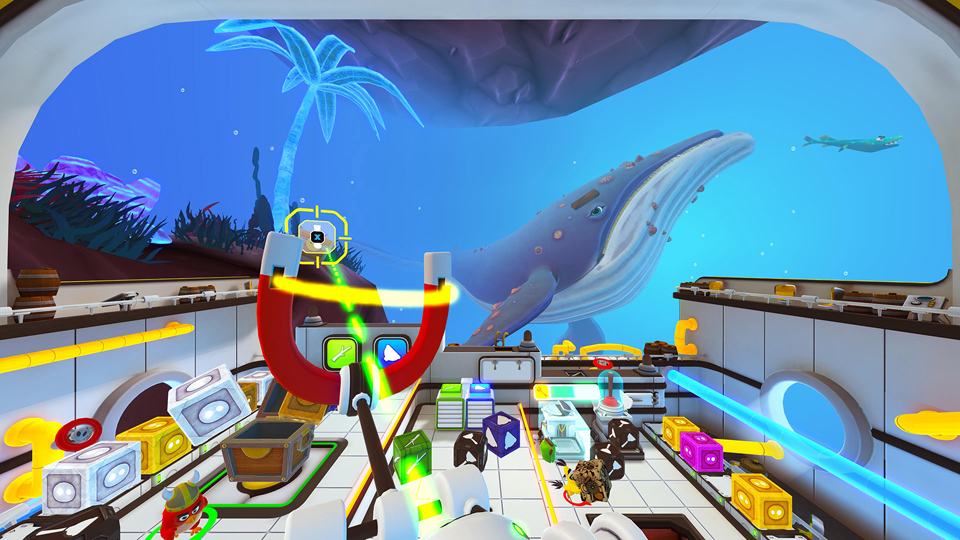 While this is playable alone, I’m not sure I can recommend it to those who wish to play it that way.  The introductory stages are easy enough and the campaign, save for the last stage isn’t insanely difficult, though getting 3-stars by yourself on any stage is a task for sure.  The latter 3 modes offer up more and more challenging stages that only offer frustration by playing solo.  Hopping back and forth between the captain or bird freezes the unused character effectively halving the amount of time you spend on either one and becomes a nightmare to balance when you need to spawn ammo boxes, create said ammo, load the gun, fire the guns, reel the loot in, put the treasure away, clean up the scrap, possibly get rid of TNT, all while the ship is constantly moving through the stage.  Bottom line here is this needs to be played with at least 1 other player and the more the merrier, especially when people know their assigned tasks.  I also ran into some environmental issues with the birds on the floor as they would get stuck on ledges forcing backtracks and wasting precious seconds to correct. As you accrue stars, you also unlock hats and items for your birds, allowing for a little customization. 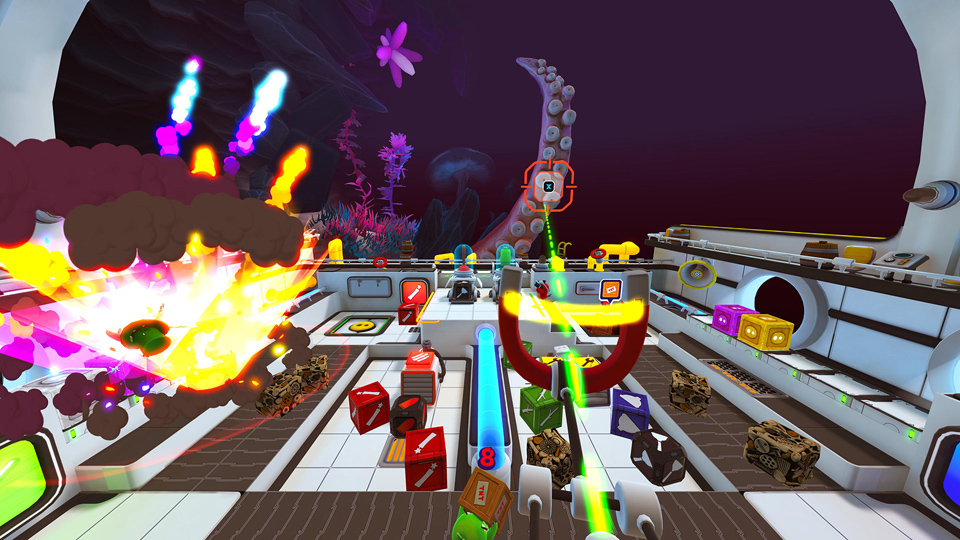 I had fun playing this alone until I just couldn’t anymore and needed to play a bulk of the game with someone else to even stand a chance at progressing.  Late game mechanics keep you on your toes with conveyor belts, walls where the VR player must grab the birds and shoot them over, loot compressors and other variables making the game a constant source of chaos that would be a lot of fun in a party setting.  If you have friends that are willing to play with you then this is a great social co-op experience that will keep everyone laughing but you ride solo, this just isn’t people like you or me.

What would I pay?  This is $30 US and even if you have friends to play with, the overall simple nature of the game makes me think that price is a tad high.  For a game reliant on friends to play this properly, I think $20 would be more appropriate price point.

XR Games provided The VR Grid with a press code for this title and, regardless of this review, we thank them for that!