Care for some light funk to go along with your journey through space?  Than maybe you’ll like Starship disco, a rhythm based space shooter available on almost every major VR platform out there.  A simple budget title that’s fun, albeit a little shallow. 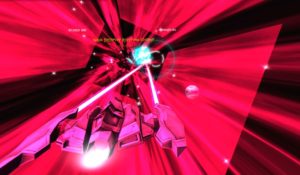 The backgrounds can be pretty distracting, but you’ll get used to them.

The game plays simple enough.  Look where you want to shoot and shoot.  To get the max score you can’t miss, obviously, and the reticle that shows up has a sweet spot WHEN to shoot, to get that perfect score.  Shooting early or late will still get you points, just not as much.  No special abilities or power ups here, just shoot and don’t miss.  This is all done to some generic funky tracks that are catchy enough or custom tracks you can import from your own collection, just make sure your custom tracks aren’t too crazy long.

The other control scheme(s) available involve using the move controllers, which turns your ship into a virtual gun.  I found it to be a little easier with one controller, and a little more comfortable as well.  The last mode utilizes both move controllers and is the most challenging as each controller can only shoot ships that match that controllers designated on-screen color.  It’s tough, but fun trying to adjust your brain to this mechanic.  Full disclosure; in this mode I couldn’t get past the first level, its damned hard and my teeny brain just couldn’t handle it.

The visuals here are nothing to rave about.  Not to say they are terrible, but it looks more like this was developed for the Gear VR and ported to the console.  Although it takes place in Space, the levels feel tight with a lot of action taking place in “worm hole” type areas.  The levels also don’t really change up the visuals too much, with only color palette changes and the background planets being the most notable differences.

With only 7 levels to choose from and no story, there isn’t a lot here.  There are 4 difficulty modes which only change how many times you can miss hitting the target.  Even on the the easy setting(10 misses) you’ll be hard pressed to complete these levels on your first try.  The different play modes as well mix things up a bit, but once again you are just playing the same levels. You can import your own tracks as well which is great, but I seemed to do worse with my own music, and those “dynamic” stages still felt familiar.

My biggest caveat with this game is that, although it’s touted as a rhythm game, I couldn’t really tell if the action matched the music.  I found this obvious with the custom tracks and couldn’t really tell on the in-game ones.  Sometimes the beats seemed bang on, other times I saw no correlation between the music tracks and the timing of the enemy, even with the respawn delay turned off.  The gameplay itself is still fun, but it plays out more like a precisely timed shooter than a rhythm one.  Also, the levels last as long as the songs, so if you are uploading your own music, stay away from the longer ones. 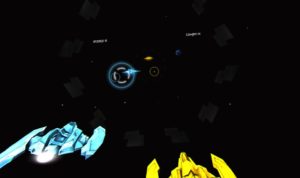 Here is your dual move controllers in action, along with color blind mode turned on

For those us that are color blind, the dev included an option to accommodate us heathens.  What it does is remove a lot of the background details so there is much more contrast between the enemies and the space around you.  It helped a bit, but in end I went back to “reality vision” just so I could enjoy all the visuals.  The last option available changes the delay after missing a hit.  On, and you get a few seconds recovery time before the enemy waves continue, off and the game doesn’t stop.  I preferred the latter mode myself just to keep my own rhythm going.

Ultimately it’s a bare bones experience with some funky disco tracks and a few different modes to mix up the gameplay.  If you like this genre, the option to play to your own tracks is still a welcome addition missing from most games of this type. The move support was also welcome as were the other available options. I had fun but, there just wasn’t a lot here to hold my interest for very long and it all just seemed to blend together after a short while.

What would I pay?  $10 US is probably OK for what you get; I just think it’ll depend on the right individual to take full advantage of the content here.  It’s fun, but repetition sets in quick, even with the mode change ups.

Solus Games provided theVRgrid with a review copy of the game and regardless of the score, we thank them for that!