First Person Wave shooters are a funny thing as I think that genre fits in VR better then many others. Carrying a host of weapons as hordes of enemies appear before you while you dodge and block incoming attacks, all in an effort to save your own skin, and probably whatever world your defending, is great fun. Unfortunately, many dev’s seem to think along my same lines as that genre has reached a saturation point in VR above any other meaning if your wave shooter doesn’t do something different, it’ll be easily ignored by the masses… and so we have Drone Striker, a budget on the rails shooter where you defend against hordes of enemy robots. 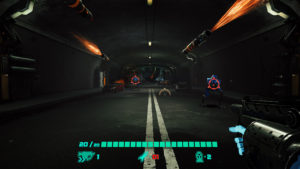 Drone Striker does PSVR users right by supporting all 3 control options and whether you play with Aim, DS4 or Moves, for the most it plays the same. Armed with a single rifle containing a few different firing options, you simply dispatch wave after wave of mechs. Ammo is unlimited with machine gun so as long as you hold down the trigger, you’ll fire… no reloading required. Releasing and squeezing the trigger will highlight weak points that your missiles will auto target and fire on (also unlimited ammo) with the final weapon being a grenade which deals massive amounts of damage to every enemy, though those are in limited supply so use sparingly. Movement is automatic once you clear a wave and while all the controllers are supported, the Move is probably the best way to go. Your gun wraps around your forearm in game and the trigger is mapped to the front of the aim controller, allowing you to hold it in an all new way which I dug at first. It didn’t take to long for that to be uncomfortable and you can switch to holding the aim normally, but it hampers immersion as the weapon is only single handed. DS4 is tracked and plays like Firewall or Doom (minus the movement) while the move matches the gun perfectly making for the most comfortable and immersive way to play. Additional health and ammo boosts are hidden throughout each level, so you may need to look around corners when the game pushes you forward.

Drone Strikers looks good… for what it is. Nothing offends. Character and enemy models repeat themselves often, but everything looks crisp and clean. The color palette used is little brighter on enemies and environments and while some of the animations can be stiff, I didn’t mind the look of the game. Enemies come at you from in front and to the sides so pay a little attention to your peripherals and the 3 stages in game each carry their own look and feel. As you move through a stage, the environment will crumble or explode around you making the levels feel less static then they are but for the most part, I was happy with the visuals. 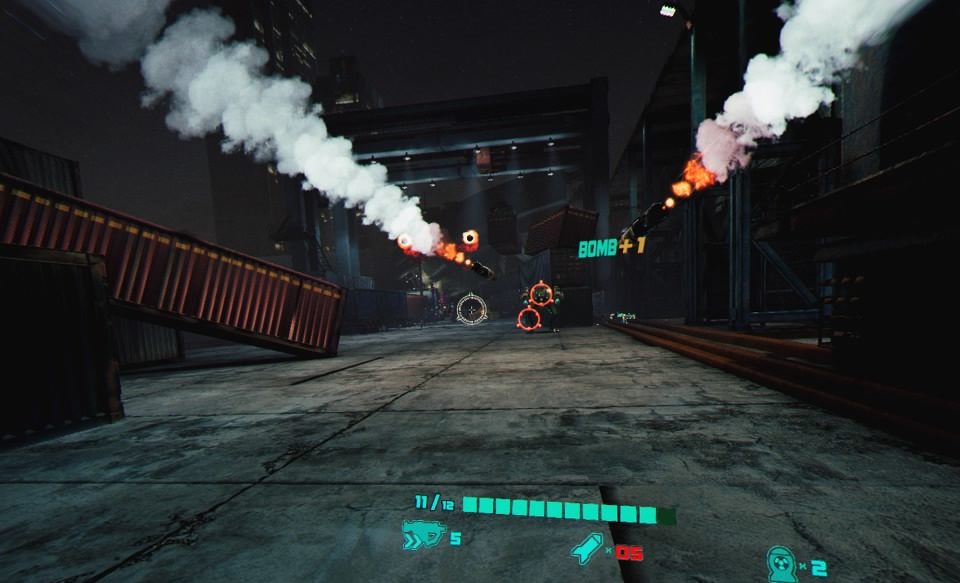 Missiles are your friends. Use with reckless abandon.

The audio is much more subdued with a forgettable action track playing in the background and some underwhelming sound effects. Weapons don’t carry much impact from you or the enemy making much of the action feel less intense then it should. Besides an opening cut scene, levels are broken up by woman who congratulates you your efforts before pushing you on.

Other then the subdued sound, there isn’t too much to hold against this game. On normal difficulty it’s very easy with only challenge coming from the boss fights. Hard mode just gives the enemies a bit more health and does make for a hectic experience. Some enemy fire can be shot out of the air and larger enemies have specific points you need to target to damage them which spices up the action a bit. There is a story here about AI robots deciding humanity sucks and needs to be taken care of, but it’s just an excuse for the action, not a focus point on the game and if you buy a $10 VR shooter expecting an in depth story, then that’s on you for being disappointed by the lack of one. 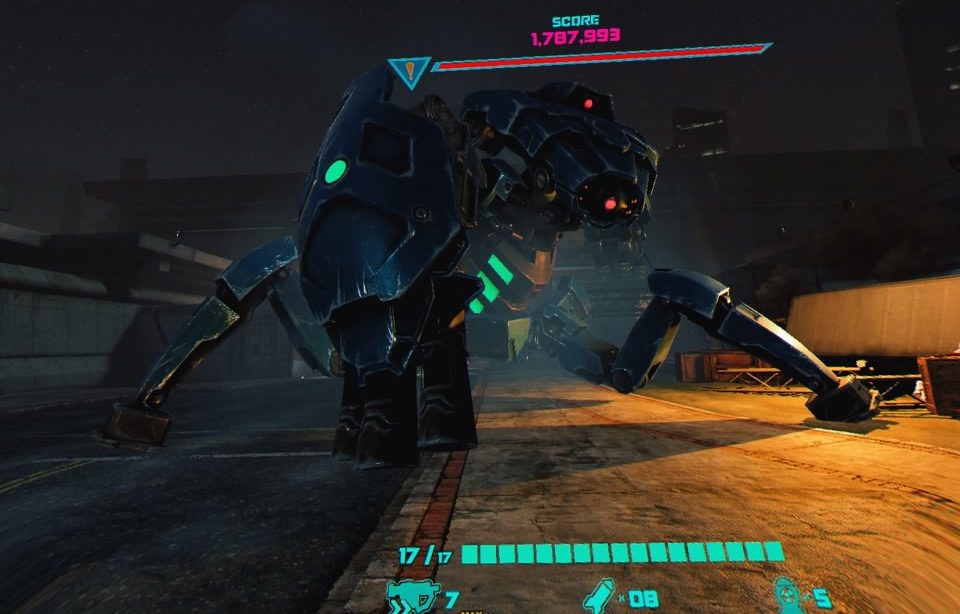 The boss battles are the highlight here!

Drone Strikers pretty much nails every part of the budget wave shooting genre it needs to. The action may feel subdued at times but the overall presentation and mindless shooting fits right in with other games in the genre. As long as you’re not expecting too much and just want a chance to shoot more stuff in VR, then Drone Striker serves up a stock on the rails wave shooting experience.

What would I pay? $10 is perfectly fine. The campaign will run you 90 minutes and never let’s up. If you’re a fan of games like Unearthing Mars 2 or just loved the Shooty bits in Rush of Blood, you’ll pull some joy from this as well.

Winking Entertainment provided The VR Grid with code for this title and, regardless of this review, we thank them for that!