We have had a few Rube Goldberg(esque) titles in VR though, as far as I have seen, none have truly captured the magic of making a maze-like contraption with proper real-world physics.  Sure, we have had games like Domino Craft or Crazy Machines, but both of those games lacked the true free form creation that makes messing around with these puzzles so much fun.  Gadgeteer released in early 2019 on the PC side of things and has made its way onto the PSVR headset and I see if it can live up to expectation or just be another throw away puzzler. 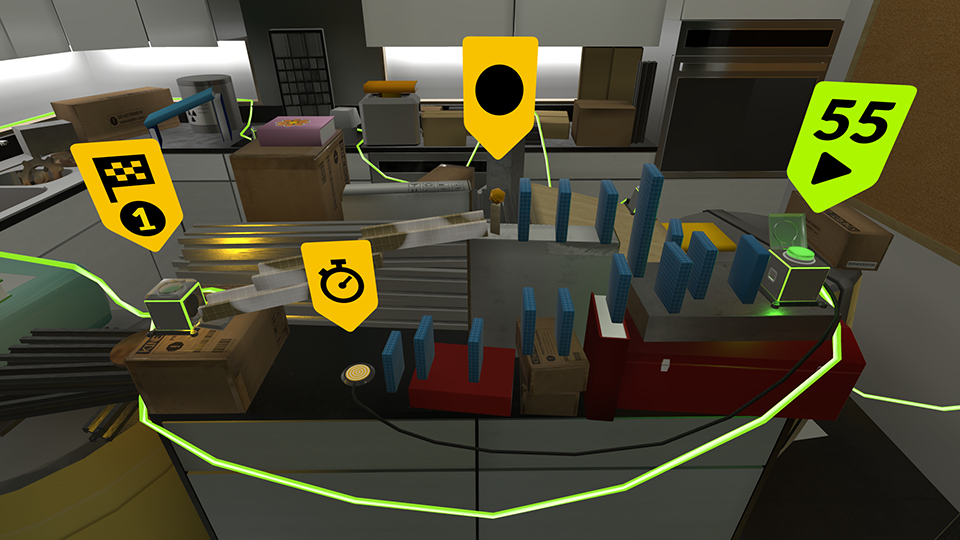 Every contraption offers its own unique challenges

You can use a DS4 or 2 Move controllers with either method working quite well save for the limited tracking on the DS4, which I guarantee will cause many frustrations when trying to make those finer movements and should only be used if you don’t have the option of those ball headed wands.  You can play with blinders on or off but that’s about it as far as comfort goes with click-turning being the only option available.  To move you need to physically grab and drag yourself around the house you are in which initially seemed awkward and cumbersome, but once I got used to the controls, soon felt natural and, in truth, I didn’t even mind the click turning though I’d still like a smooth option.  Your main hand (you can choose left or right) acts as your multi-tool and allows you to place, remove and manipulate the many pieces you can use to solve the variety of puzzles put before you.  Your off hand is used to bring up the items you can use and includes an undo and start button.  Each puzzle starts with a small box that will typically push a block or ball, triggering a series of events that will hit the small box at the end of the puzzle.  There is a lengthy campaign (puzzle mode) that essentially takes you on a tour of the house as you solve incomplete puzzle after incomplete puzzle, and they get steadily more complicated the further you get.  Each puzzle only gives you access to specific pieces and I urge anyone playing this to not hit the “unlock all levels” option in the games main menu as it will take a way a substantial amount of fun and satisfaction from playing through the campaign.  Should the pre-made levels not be good enough for you, you can venture into online “Maker” mode which lets you not only play other creations, but submit your own, ensuring essentially endless content save for the fact that not every user created contraption is a winner. 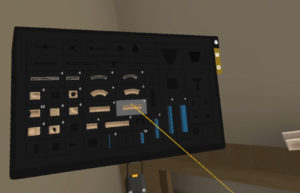 There are a 100 items to play with

Gadgeteer looks simplistic as you are basically playing in lightly populated house with puzzles placed around it.  The campaign takes you from room to room and uses the natural environment in conjunction with “floating” pieces to make these elaborate puzzles.  There isn’t anything in the way of lighting effects or crazy details, besides changing the time of day you play, but regardless of any shortcoming this game may have visually, I never once took any issue with what I was looking at.  The puzzles start off simple enough, tasking you with placing blocks in domino-like fashion though soon enough you’ll be manipulating ramps, balls, buckets, see-saws, hammers, shoes and a host more items that make this a true Rube Goldberg experience.  The physics are the star of the show and are realistic enough that starting any puzzle, just to see where my skills were needed, was an absolute treat.  What makes these physics seem real is that you may not always get the same result as the last due to the way the pieces interact with each other.  The satisfaction in watching these elaborate machines do their work is just so damn…satisfying, I honestly can’t think of a better word.  The visuals may not be amazing, but textures look good enough and even the “blurriness” I have come to associate with the aging PSVR headset is absent, leaving me with a pleasant and refined game that delivers where it needs too visually.

As the experience is a passive one, there’s not a lot going on save for the sounds of the pieces you place and of course the orchestra of a successful machine as you hear domino’s fall, balls roll and items impact with each other.  This is all done to a quiet acoustic guitar soundtrack which just adds to the pleasantness of it all. 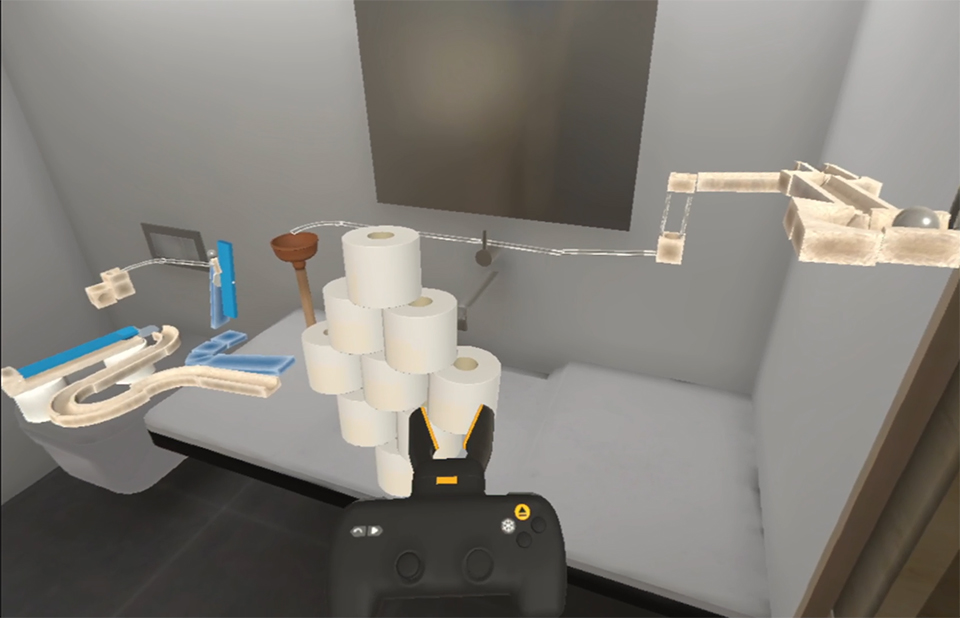 Build in any room in the house!

Gadgeteer really doesn’t have a lot of faults and any that are in here are minor at worst.  The controls are intuitive and though I did have some issues with my Moves when I tried to subtly manipulate any pieces, those tracking problems really only held me up for a second or 2 before bypassed them.  To place objects “frozen” in the air, you need to activate the freeze function which bathes the pieces in a light frost and on numerous occasions I would forget that it was activated causing me to place immovable objects that I subsequently had to fix which was annoying, but that’s really more on me than the game.  There is maximum piece limit when you want to create your online creations which may affect some grander designs, but you can still build using plenty of pieces and I’m sure most of the hardcore designers will easily work around those limitations. 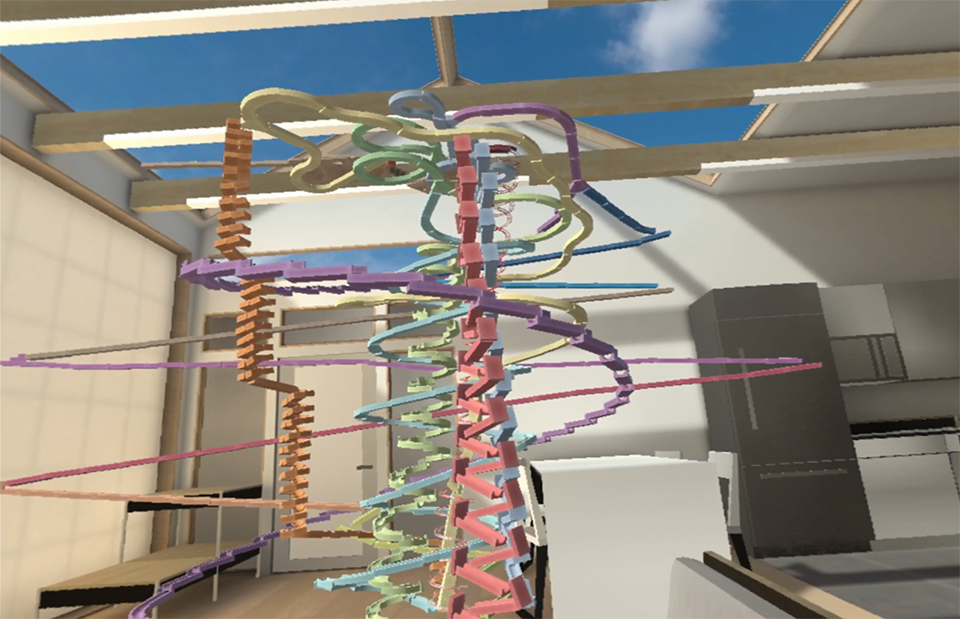 I can’t imagine how long it took to make this!

There is a lot to like in Gadgeteer and even if you ignore the campaign and just want to see the crazy contraptions people have already made, it’s hypnotizing just to watch those in action.  I highly recommend playing through the campaign, which will take a few hours with the latter half having some substantially difficult puzzles and with the online portion already having a fair bit of custom created content, once fully released, there should be plenty of reason to return to this again and again.  Anybody waiting for a Rube Goldberg type game should be ecstatic with what’s offered up in Gadgeteer, I’m having a blast with it!

What would I pay? This is $15 US and worth every penny.  You’ll know from the game footage if this is a game you want in your life or not and if you have any interest in these types of whacky puzzlers, then just buy it…you won’t regret it.

Metanaut VR provided The VR Grid with a press code for this title and, regardless of this review, we thank them for that!