Survival horror is now in space!!!  Alright, maybe it’s been there for awhile, but not on the PSVR, and now we get Syndrome, or at least a small part of the game, in glorious VR.  Just so it’s really clear this review is ONLY for the VR portion of the game, which is currently only a horde/exploration mode of sorts.  So while I will touch on the non-VR stuff, this review is only for that portion. 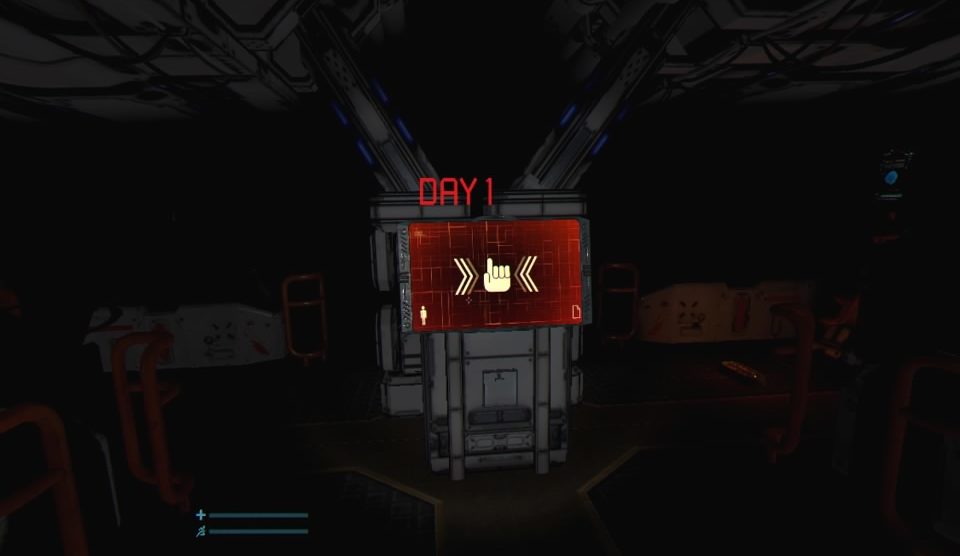 And so your survival begins…access the computer, open the door and get busy dying!

With DS4 being the only control method available, this plays like any stock FPS you have played before.  Move with the joysticks, fire with the right trigger, sprint with the left trigger, it’s a standard fare…minus one glaring omission which I will get to in a bit.  It’s worth noting that there is a  smooth turning option as opposed to the default click turning, which I appreciated.  In the singular “VR mode” you wake up from cryo-sleep, alone and unarmed and must access a computer to leave the safety of the room you are in.  From here you walk around the ship looking for any supplies to help in your survival.  It won’t be too long before you find a pistol and an access key for a locked door and so you begin to explore…and survive.   It’s worth noting that you have to play the first campaign level to unlock the VR mode, which is silly as it only teaches you how to interact with computers and items and doesn’t even address the use of weapons.

At its core I actually enjoyed this mode as there really isn’t anything like this available for the headset, unfortunately a few poor game design decisions ruin what could have been a solid VR addition.  For starters, your flashlight may be the worst ever seen in a game as the light only travels maybe 10′ in front of you.  This adds to horror/suspense element, but it feels like you are holding a candle and gives little visual warning of anything coming up ahead and denies you any of chance of killing enemies from a safe distance.  Secondly is the lack of a reload button which is crazy for a few reasons.  Ammo is sparse(minus an exploit) so every shot is precious, but some enemies can take a lot of damage and the reload time is really slow.  So it becomes a choice of expending vital ammo to get a full clip, or risk encountering something big and having to wait precious seconds for a reload.  You do pick up a melee weapon, but the last thing you want is to get close to any enemies as you are not a damage sponge and after only a few hits, you will be in big trouble, though if you survive an encounter, there is health to be found. 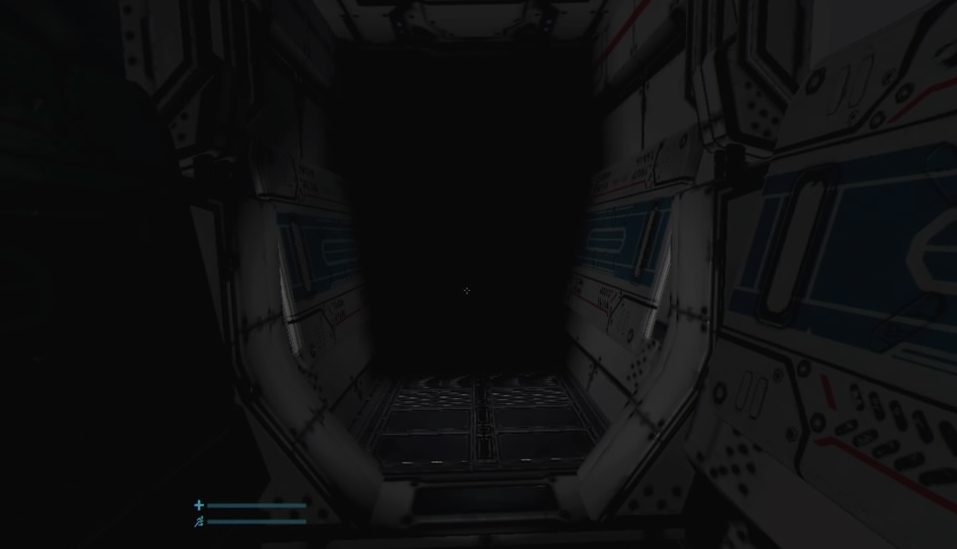 The game is broken up by locked doors, which require security cards to open, so as you unlock a new section, new enemies pop up and need disposing of.  I appreciated the “randomness” the enemies as each time I played, even though your path is linear, the spawned enemies change up so while you may encounter only one giant cyber-mutant in a room, next time you play it may be 2 deadly alien zombies instead.  That kind of randomness kept me on my toes and I never knew what was coming next.  While I whined about it earlier, ammo seemingly replenishes at the spots you find them in, so as long as you are willing to just walk back and forth and back and forth for a few minutes, it’s easy enough to amass a fair amount of bullets.  Also, the goal is to survive as long as you can, and this is broken up by ‘Days’, but each days is probably 5 minutes of game time and without any kind of leaderboards, it seems pointless to keep track of survival time this way. 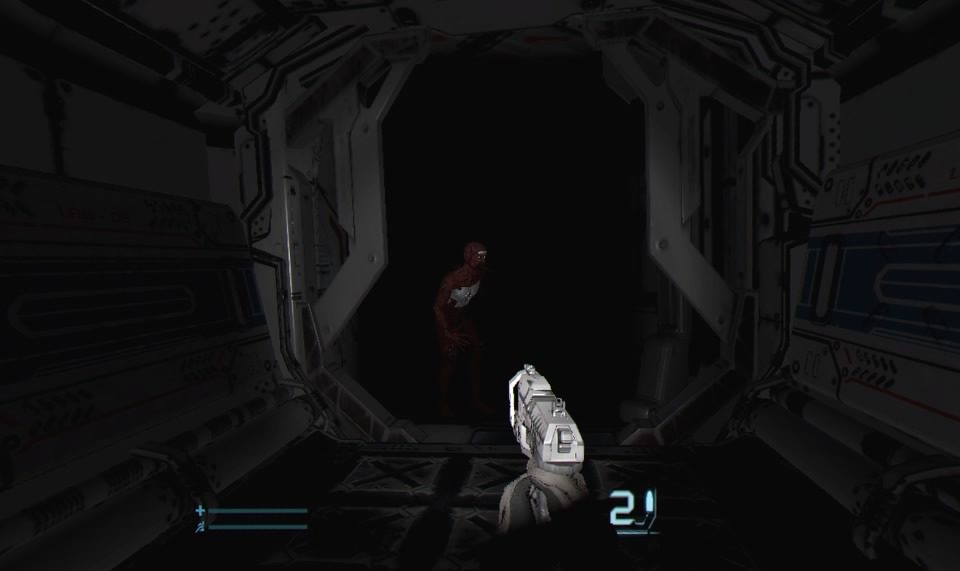 2 shots before a reload, I should’ve planned that better

The visuals are…lacking to the say the least.  This looks like a game that would have came out more than a decade ago and it shows in many aspects of the game.  The ship you are in looks alright, but typically just recycles a lot of the same elements making for a sterile design.  Lighting effects are present, but only within the range of your meager flashlight with everything beyond that being bathed in complete darkness.  Character models look awful with only a handful of stiff, repeating animations.  They don’t react at all to weapon impacts, other than a spurt of blood, and walk or run toward you with a mindless intensity.  If the gameplay wasn’t so frustrating I could forgive the visuals, but in combination with them, it’s hard to find praise for this game mode.

That said the audio, for the most part, works. You can hear yourself breathing and reacting to the sounds around you.  Monsters sound particularly menacing and their footsteps are the only indication that they are nearby.  Syndrome is plagued by a need to keep you on your toes and scatters random scare noises throughout the game.  Initially these were unsettling, under the guise that something was nearby, but after a handful of these moments, I just learned to ignore them as they are only there to scare you and nothing else. 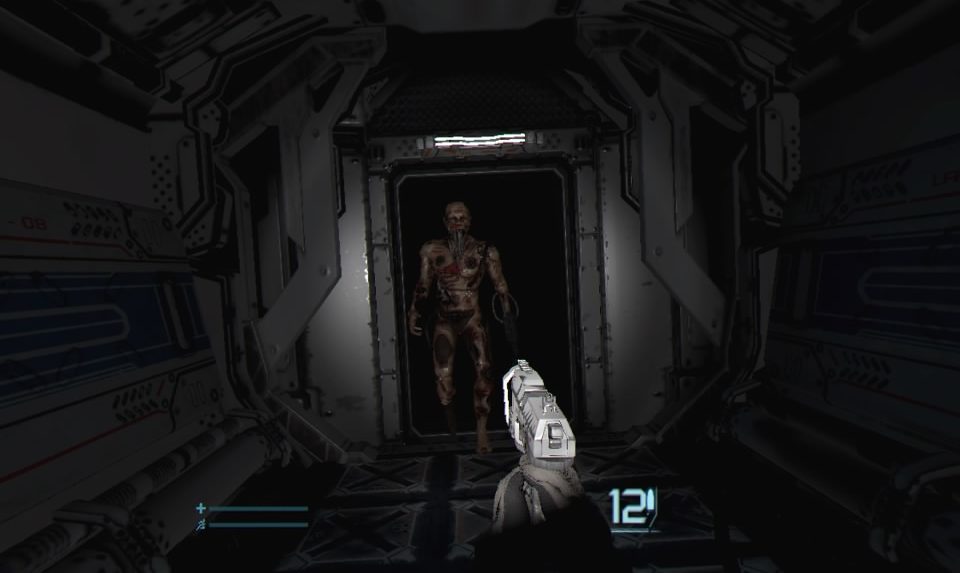 He’s coming right for us!

As I said, the pieces are all here to make for a fun, scary VR survival horror game but to many issues get in the way of any fun you have.  While enemy spawns are random, the levels are not and multiple playthroughs to start to feel very repetitive.  I would honestly increase my score by a point if they included a reload option and the game gets insanely hard once you encounter the 3rd enemy type.  For a little while, I was having fun creeping through these corridors and seeing what horrors await, but almost everything here seems designed minimize the fun and maximize the frustration.

What would I pay?  Keep in mind this is only for the VR content. £5 is as high as I would go for this.  It’s more broken and frustrating than anything else and the repetitious nature of this VR mode just gets old.

Bigmoon Entertainment provided theVRgrid.com with a review code for this game and, regardless of this review, we thank them for that!