Its castle storming time, and castle defending time as it were, with you taking on the roll a micromanaging lord tasked with surviving waves of assailants in a fantasy realm.  This is a title that has been around for a number of years and ported to multiple platforms, but can the transition from classic 2D action to VR enhance this game even more…ehhhhh not really but that doesn’t mean you won’t have fun. 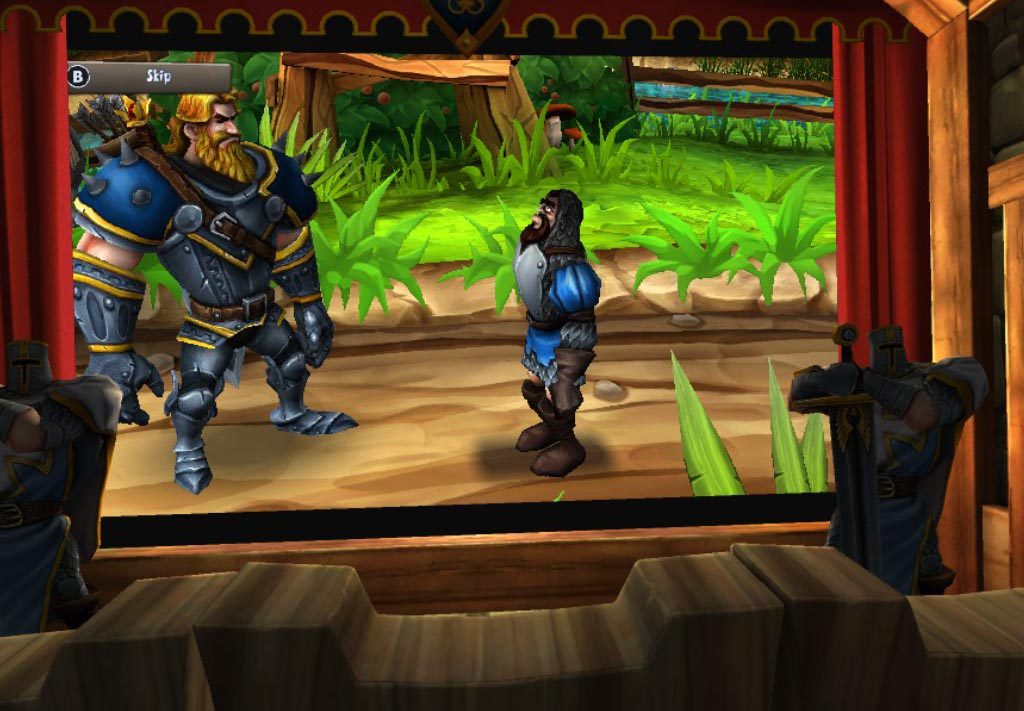 Your story as told through theatrical cut scenes…literally

Your major offensive/defensive weapon is your ballista, which mirrors angry birds in its execution, with you using the controller’s joystick to aim at incoming troops or at the opposing castle, if that level has one.  Fret not though, that is not your only defense as you can also spawn troops that travel outside your walls and attack the enemy or, if they get to the enemy castle, break down their gate.  The final troop available is a summonable Hero whom you control directly by swinging your sword, or firing a bow while walking back and forth along the singular path available in the limited time until he disappears.

Everything here is upgradeable and unlockable.  As you progress through the storied campaign, or the other modes, you accrue money which can be spent on levelling up your forces, which is a must as the difficulty ramps up.  It never gets impossible, but you may find yourself playing a skirmish or 2 just to level up your stuff to match the enemies you face.  Besides the combat, there is a castle editor which is probably the weakest part of this game.  It’s not very intuitive and moving the pieces of the castle around can be cumbersome and frustrating, especially when rooms don’t match up.  You’ll be forced to edit your base as certain troops need special rooms to be placed in your castle so you access them in the game, though an option for using a default castle is here for those less interested in architecture.  After some time, I felt more comfortable with that mode, but I never looked forward to editing my castle.  Still, it was nice to see your layout in-game the next time you played.

The presentation here is great with nice cartoonish visuals and an overall sense of polish.  With that said it does come across as a port to VR.  The games menu and story elements take place in a theatre with you sitting center to view the action (you even get pop and popcorn!).  The stages themselves look great and carry with them a great sense of depth, unfortunately that depth us underutilized.  The action takes place entirely on one plane and on top of that, looking far to the left or right reveals that the rest of the map just fades away leaving nothing behind you, which is a pet peeve of mine.  So, while it does look pretty, it’s need to be in VR is minimal.  I would still rather play this in VR than not, but for those wondering what the fuss of VR is all about, you’d best check out another VR title.

The audio here was also fine carrying tunes befitting the fantasy setting.  What did annoy me though was the Nintendo-like character audio.  When you see a character in a cut scene you’ll hear them shout ‘Hello’, grumble or just make a singular sound before you are forced to read through the conversation.  It’s a little off putting, especially considering that there isn’t a ton of story.  Given the art style, I would have appreciated some over-the-top voice acting to accompany the visuals. 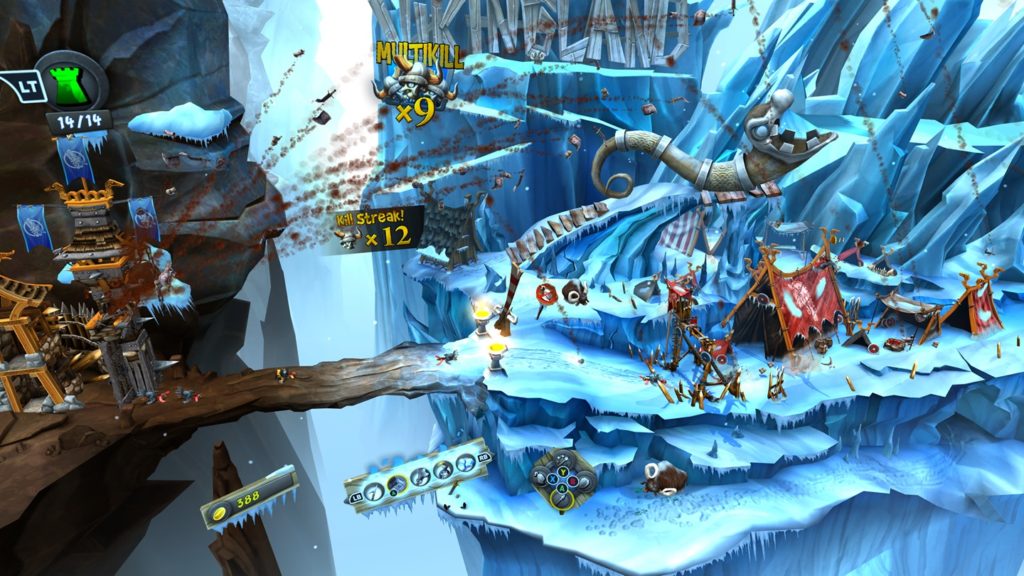 The level of polish here is pretty darn nice!

The PSVR version includes some 1 vs 1 multiplayer which is a welcome addition.  This plays like the single player game, but the human opponent just adds the whole new element of unpredictability.  In this mode perfecting your castle layout is now critical as a poor layout could spell certain defeat.  This can be the most challenging mode, but also a great way to improve your skills and victory here is so satisfying.

The game does do a decent job of mixing up the action by constantly throwing different variables and level variety at you.  While the standard level is your castle w/ballista and maybe an opposing castle where enemies spawn(sometimes there is no castle).  Occasionly the storyline mixes it up by having you play as just the hero for a stage, or perhaps you can’t spawn soldiers for a level because they are on strike. The way these situations arise can be humorous at times and eases that feeling of repetition.  Add the unlockables and upgrades and you’ll find yourself playing ‘just one more stage’ more often than you might think.

Besides campaign is a skirmish mode which is just a choice of a one-off level that can help you hone your skills.  Like the campaign though, you must beat levels in succession to unlock them.  The other 2 single-player modes are Survival and Hero Survival.  Like they sound, you must defend against endless waves and see how long you can last until you succumb to the unrelenting forces.   As the hero though you don’t have the benefits of a fully armed castle, but rather just your sword, bow and arrow and magical abilities.  It’s a fun little addition that can get you some much needed loot relatively fast.

Each campaign stage has bonuses that can yield more loot, like finish within a set amount of time or get a certain number of headshots.  If you try and attain these they can help not only with bonuses, but forcing you to learn some of the more nuanced features of the game.  My one major gripe with the gameplay is the over-sensitivity of the joystick when using the ballista, it’s way to touchy, at times taking me precious seconds to try and line that perfect shot. 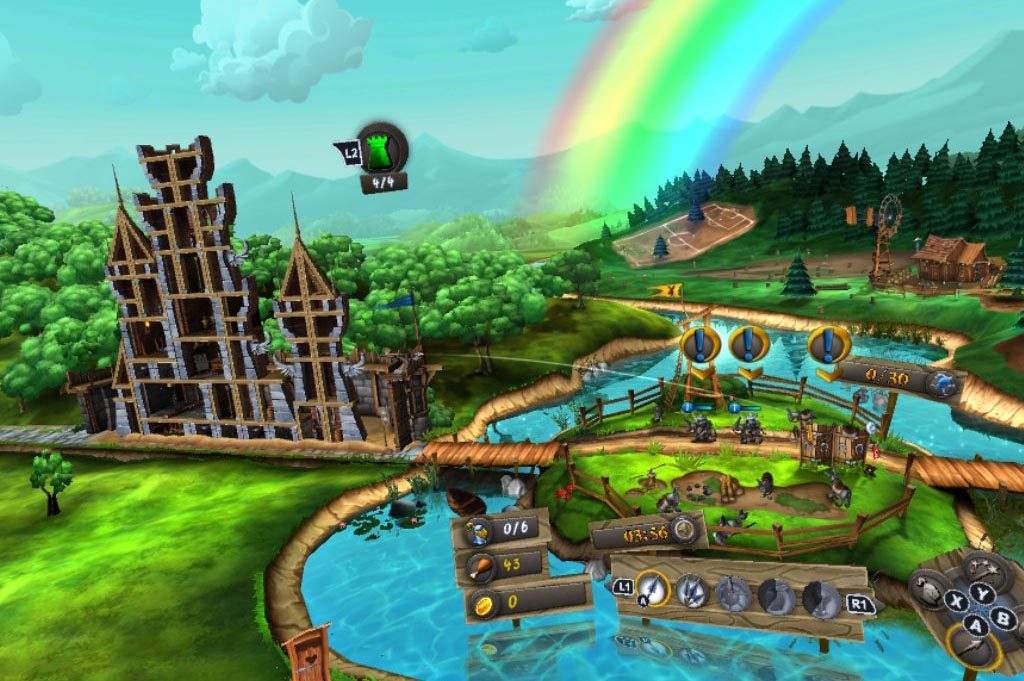 Defend you castle or all will be lost!

Available the PSVR is a 1 vs 1 multiplayer mode pitting you against a human opponent.  The difficulty here increases dramatically as you are now squaring off against someone on equal footing.  Castle layout becomes incredibly important and protecting your barracks is pivotal in winning the match.  It’s a great addition and one which will challenge all the skills you have required in the single player bouts.

There is a fair bit of content here with a fully fleshed out campaign and a host of other game modes.  With that said, if you’ve played this before, VR doesn’t add much the game as it all takes place a singular plane.  Even though they try and mix up gameplay elements frequently throughout a playthrough, repetition will rear its ugly head, especially during longer gaming sessions.  Still, there aren’t a lot of VR games out there like this, and the quality and polish here is undeniable, maybe just play in small doses.

What would I pay? $10 is a pretty decent price for this.  Al lengthy campaign, a host of other modes and lots of gaming variables keep this interesting.  Just don’t expect to be blown away the the VR.

Zen Studios provided theVRgrid with a review copy for this title and, regarldess of this review, we thank them for that!