I’m always looking forward to the next “big” VR adventure with games like Vertigo Remastered and Half Life: Alyx offering some fantastic and immersive action, placing the player in strange, yet familiar worlds loaded with immersive physics and clever puzzles.  Naau looks to try to be that next great v title offering a sci-fi fantasy adventure where you navigate strange lands, fending off foes with some impressive physical combat and unravel the mysteries surrounding the beings that brought you here. 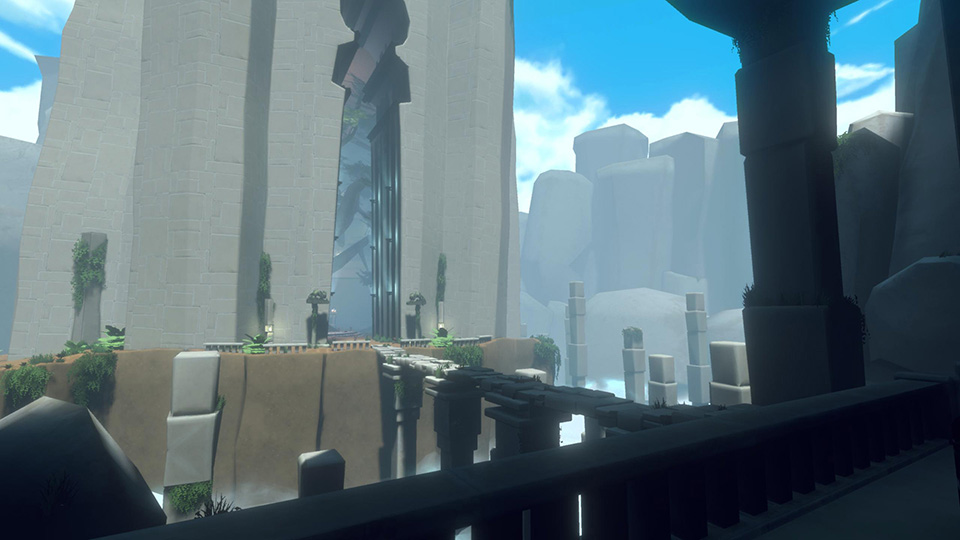 Naau is a physics-based adventure title that has you travelling through a series of strange and bizarre locales on an alien planet.  Standard locomotion and comfort options are available including teleportation movement and right away you’ll be introduced to the physicality in this game.   You arrive in an unfamiliar realm without much in the way of explanation beyond a cryptic opening cut-scene and are left to wander the lands in search of what was taken from you.  It’s confusing and disorienting though being left to your own devices allows you to experiment with the world around you, figuring out just how the game’s physicality can get you past obstacles.  Machines scattered throughout the world can manufacture weapons or alter keys and once you create your 1st weapon, the game gets a lot more interesting.  With my trusty staff in hand, I was soon bashing at my foes with reckless abandon though it became clear that some foes require different weapons to defeat them.  Scattered around the environments will be chests, lockers and crates which can be smashed or opened to reveal loot in the form of items, ammo or energy cubes which will be needed to purchase weapons, which will degrade as you use them.  Keys will be needed to unlock doors with some requiring a little bit of effort in finding or even manipulating them too work.  All of these items are stored on a wheel menu you can bring up or by placing them on slots at your hips or over your shoulder.   The core mechanics are all expanded upon the further you progress including new abilities, items and enemies that can only be defeated using very specific and often times, clever attacks.  A manual save system is in effect that only lets you save at specific points in a map and once you activate that save, it disappears so depending upon how long you stay in an area, if you die you could be replaying large sections of the game.  Health is monitored by a glowing tattoo of sorts on your arms and is replenished by touching floating bubbles found throughout each stage or by ingesting little health cubes found while scavenging.  Throw in some climbing sections, environmental puzzles, boss fight all in a 10-hour campaign and there is a lot to take in. 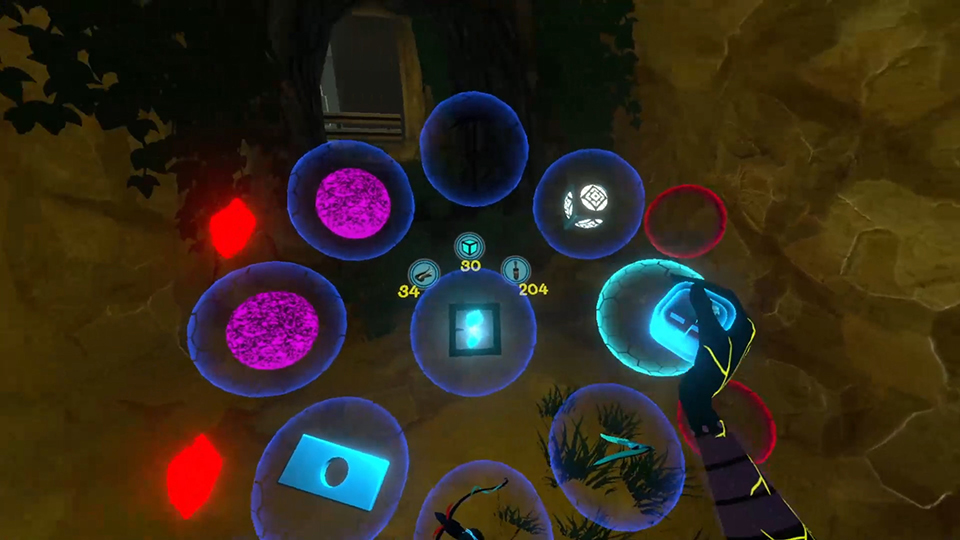 Naau looks very slick using a slightly cartoonish art style with an almost pastel color palette.  The opening stage is a series of floating grey islands above billowing clouds connected by a series of bridges and looks very impressive as the scale of any set piece is typically massive.  As you navigate the story, you’ll find yourself venturing through catacombs, factories, mines and cave systems each one getting more and more harrowing than the last.  Monstrous machines from a bygone age will show up as you travel from area to area and no matter where I ended up, I felt like a stranger in a strange land and what’s worse, I felt completely alone.  Enemies come in all forms from small frog-like apple throwing statues, wooden & stone golems, cute but savage warriors, robots and an array of flora that will mess you up.  Items are strewn about, implying this world was once inhabited by creatures other than the ones you face with some subtle hints found throughout that a calamity had happened before your arrival.  Almost everything has a physicality to it, which is awesome as nothing adds to immersion more than playing with physics in a semi-realistic way.  For instance, I was sick of opening up sliding doors by grabbing them and just tried to push them open with my staff and it worked speeding up my scavenging and making me feel like I ‘life-hacked’ the game.  Anything you can grab can be used as a weapon and while those items might be less effective than your fabricated weapons, the fact that enemies and items will still react to the impacts of a brick or spade or whatever is so satisfying.  Overall, I was impressed by the sense of scale in the game design and the shear amount of stuff you can interact with making for a title with tons of potential interactions in a very pretty world. 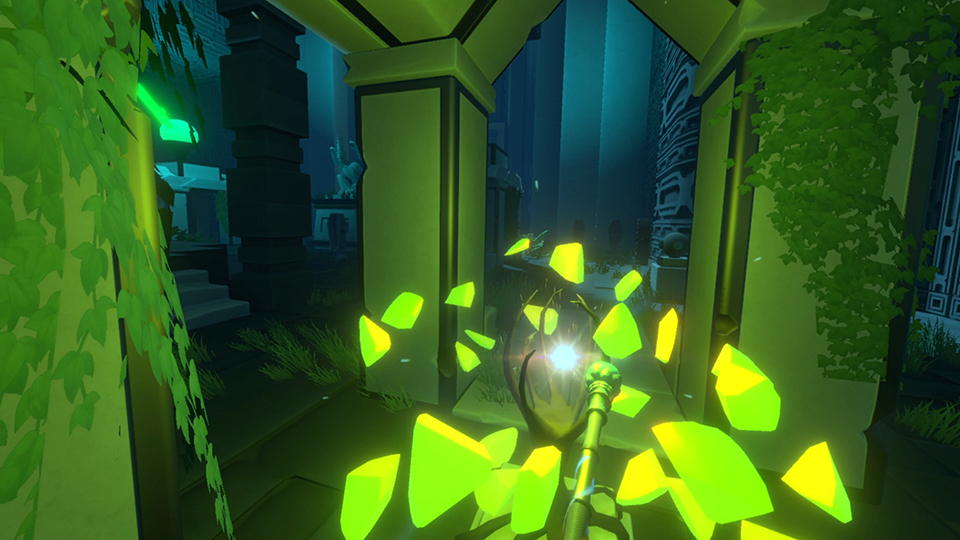 You can smash a lot of stuff in here!

That sense of loneliness is amplified by the soundtrack, which can be borderline horrific at times as uneasy tunes play during more intense moments.  Sound effects are, for the most part on point, as everything has a realism that is made better by the sounds made when you break stuff or try and smack different enemies.  There is a lot going on at any given time so pay attention as your only warning that an enemy may be sneaking up on you may be the creaking of their joints or an errant squishy sound of a missed attack.  When it works it’s great, but on a few occasions during the “plant” stages, the noises from receding plant life would temporarily mute the music playing which was awkward, but outside of that, I thought the audio design was solid.

Naau is a game with an impressive physicality but is a victim of its own immersive tactics as well as some poor design choices, a slight lack of polish and pacing issues that do hurt what is otherwise a great title.  The save system is fine and mostly fair, but on a few occasions, I was left saving at terrible points where I was almost dead with nary a health bubble in sight.  There is no way to roll back to an old save so I was just left to try and run the next gauntlet without being hit and in truth, I almost gave up as it was infuriating to take the smallest shot and be forced to start over again and again.  By shear force of stubborn will…and a bit of luck, I persevered but a save system this strict can be punishing and possibly leave you in a situation to dire to continue.  I also got stuck multiple times; once when my hands would not separate from a barrel I had grabbed and a few more when I went somewhere I guess I shouldn’t have, forcing me to reload the game back to my last save point as I trapped myself in geometry.  Despite the massive stages and the changes in the settings, by the halfway point in the game I was getting fatigued by how many times I was being asked to perform the same tasks again and again.  One puzzle requires you to catch 5 fish and place them on a color matched console, waiting for the fish to jump at me before catching them and placing them on the altar…4 TIMES OVER meaning I had to catch 20 fish in this section which just felt like padding and coincidentally was also one of the sections I got trapped in.  The same could be said for a mid-game minecart ride which had me happily dodging and shooting the same obstacles in my path which was a nice change of pace from the combat and exploration but at almost 20 minutes long, at the halfway mark I began to question if I wasn’t stuck in some sort of crazy game loop.  Even the latter 3rd is little more than encounters with the same enemies, only in greater numbers.  Other issues like hands detaching while climbing causing a fall, or the grab mechanic (which lets you pull distant items to your hands) not highlighting the correct item, drawers closing after opening them or enemy bullets passing through the environment point out that while there is a lot here to like, there are a few issues that hold this back from greatness. 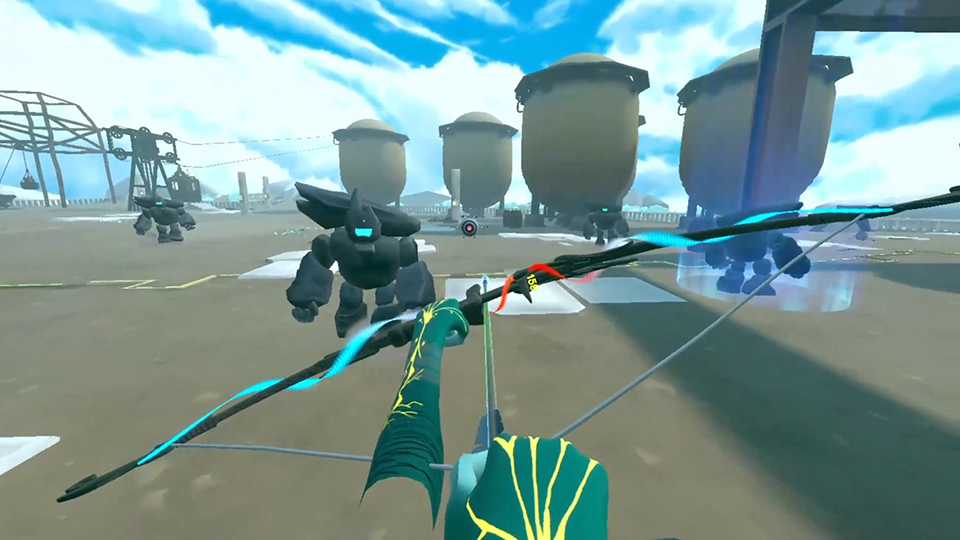 A variety of foes await your arrival.

Naau is an Epic Adventure that doesn’t know when to stop and while the game is lengthy for a single player VR experience, at times it feels artificially inflated with repetitious encounters and puzzles.  Despite my issues though, I still had a fun time exploring this world, even though I really had no idea why I was doing it. as we don’t see enough of these larger titles in VR.  It may wear thin at points but push past those bouts of apathy and you get a surprising and unique adventure that still offers up a lot of fun.

What would I pay? This is $25 US and worth that despite my issues.  With luck some my problems will hopefully be addressed as there is a lot to like here and fans of games like Vertigo Remastered or even Boneworks will probably enjoy this quite a bit.

Gamebit Studios provided The VR Grid with a press code for this title and, regardless of this review, we thank them for that!