A-Tech Cybernetic is a name that does not tell you anything about the game but let me tell you, this a first-person shooter in the vein of classics like Doom or Quake that aims for action above anything else.  You play as an unnamed soldier who happens to wake up, without much of an idea who he is and with an extra voice inside his head, inside a futuristic biomedical facility that has been overrun by all manner of mutants and it’s up to you to take them all out! 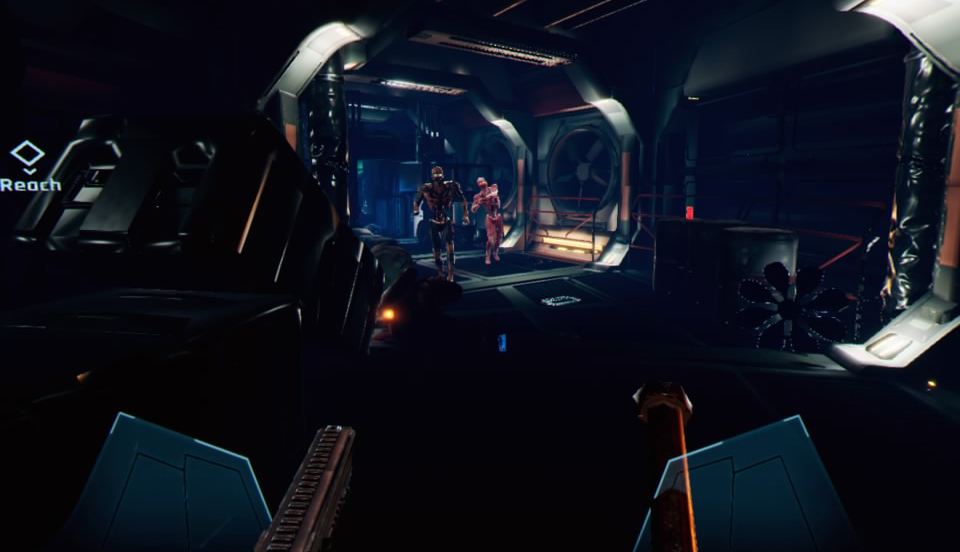 Don’t worry, you got time before they get to you.

Move controllers are your only choice here with your locomotion options being limited to button presses, making movement a little cumbersome as the button placement on the Moves and the mapping in this game seem to be at odds with each other.  You can freely roam the environments with smooth locomotion or with teleport and click-turning should you need them, picking up both melee and projectile weapons along the way.  You can holster a weapon on either side of your hips allowing for easy access when you need them with anything requiring ammo being reloaded by simply dropping said weapon near the holster.  As you acquire more weapons, simply holding the trigger down while not holding a weapon will bring a up a nice circular menu that allows you to spawn any weapon you have found.  As you roam the environments you’ll be searching through containers and picking up loot with your handy telekinesis power.  A few mini games show up that require you to plug in cables to their color matched socket or fire arrows at simulated enemies to unlock doors and anything else blocking your path.  From here you navigate the linear 5-hour campaign all while taking out different types of alien zombies & other mutants as they teleport ahead of you and try and take you out. 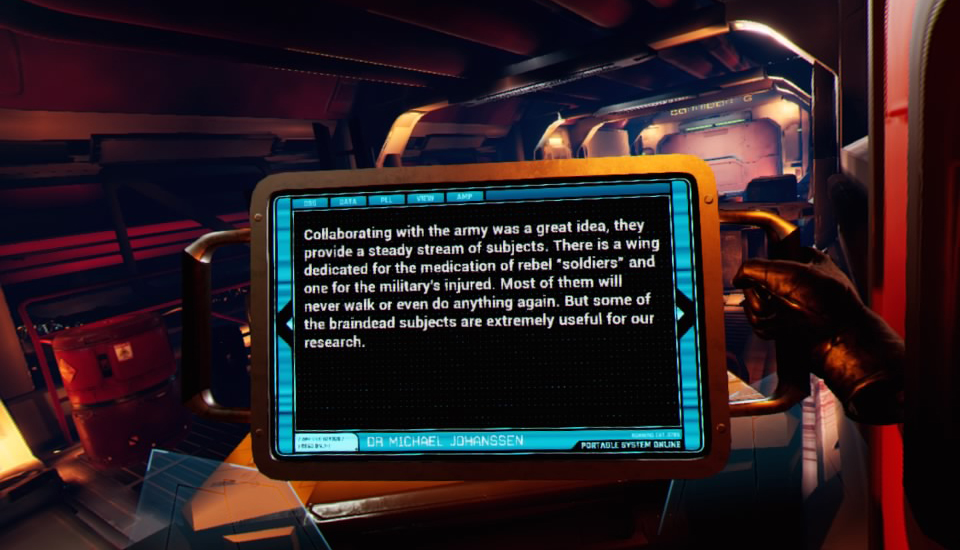 If you want the full story, you’ll have to read a lot of these logs.

A-Tech Cybernetic delivers a disturbing atmosphere with corpse laden halls and blood-soaked walls at almost every turn.  The opening stage is reminiscent of titles like Dead Space and even oozes similar vibes to games like The Persistence…at least at the game’s onset.  Enemies come in standard forms with slow and fast zombies, even faster female versions, some armed with weapons and other hulking brutes that can take and deliver a ton of damage.  Each one does carry a fair bit of detail and the additional lighting effects do make some of these encounters a little unnerving, especially when the baddies sneak up on you.  Many foes will teleport in ahead of you and start lumbering your way and once they are dispatched, disappear the same way the came in a quick flash of light.  Zombies animate rather well though only contain 1 or 2 different movement animations making them feel very autonomous and depending upon how you kill them, or just hit them, could result in some wacky rag doll effects as they fly across the room after getting hit by a bat or shutter and shake uncontrollably as you pepper them with bullets.   The level design is rather impressive though it doesn’t take too long before any particular stage starts to feel samey as you seem to explore almost identical rooms over and over again or travel through expansive cave systems.  Overall, I would say the look of the game is on the higher end for a budget shooter, but don’t go into this expecting to be blown away as every impressive visual moment is countered by repetition and some glitchiness.

Audio wise, A-Tech is more mess then anything else.  Some Doom-like music is sprinkled throughout the game when the action ramps up but beyond that it’s pretty much all…not so good.  That voice in your head talks to you in an over-the-top ‘B’ movie type mad scientist cadence that gets grating rather fast, though every now and then he did make me chuckle with a flippant remark.  The abominations you face may make the occasional groan but often come at you in near silence without even the sounds of their footsteps present which I wouldn’t have noticed save for when enemies teleport behind you without any indication at all, which resulted in almost all my deaths in the game as you can’t take a lot of damage and fumbling to turn around while possibly having to change weapons is usually a recipe for disaster.  Other ambient effects like doors opening and levers activating panels or something else nearby all sound perfectly fine but the audio design, overall, needs a fair bit of TLC. 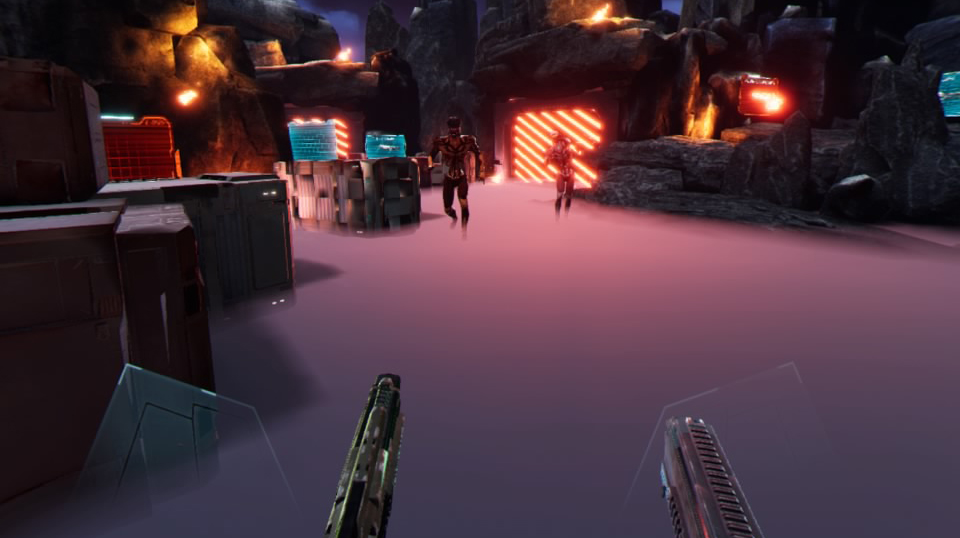 At its core, A-Tech is a straightforward FPS focused more upon action then anything else.  Later stages do offer up some mix-up in gameplay offering some slightly more challenging fetch-quests that involve finding jericans to fuel generators and a maze riddled with deadly creatures.  Those additions to the core shooter gameplay are welcome but they don’t circumvent all the issues in here, and there are issues.  Enemies behave in singular fashion be it zombies that walk or crawl toward you, armed soldiers that take you out from a distance, mutants that shoot energy at you and so on and so forth.  They only do the 1 thing they are programmed to do so exploiting their AI is incredibly easy.  I found myself getting caught up on invisible walls forcing some awkward movements to get around or through them with enemies suffering a similar fate getting stuck in hallways and at doors that shouldn’t be stopping them at all.  While I appreciate the design of the inventory system, in conjunction with that force-grab power I often grabbed items off my person instead of what I was aiming for which was just annoying. Also available is swarm mode which pits you against more and more challenging foes with ammo and weapons coming in limited supply but the more you kill the more you get though the motivations to see just how long you can last is almost completely nullified by the lack of leaderboards, on or offline, meaning if you want to best yours or anyone else’s scores, you can’t as there is no way to keep track of your efforts. 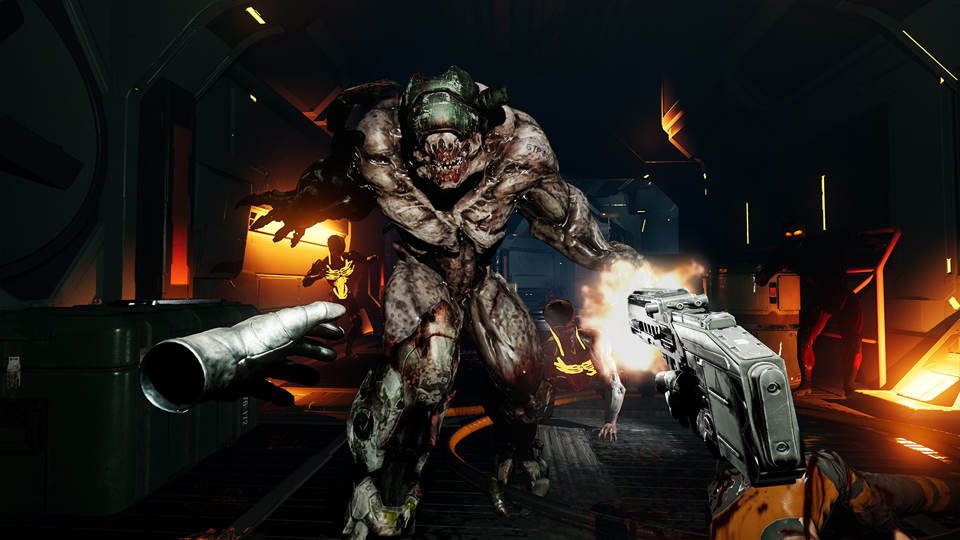 They look tougher then they are.

When looked at as a whole, A-Tech delivers a decent length single player campaign with some clever mechanics and stock shooter action.  The slight change-ups in gameplay can’t get around the easily exploitable AI and the  meandering plot, which had me chasing nav points over objectives on more then a few occasions as it wasn’t always clear why I was doing the things I was told to do.  Still, if you enjoyed games like Killing floor or Dark Legion, this falls somewhere in the middle of those 2 and while it doesn’t have the depth seen in bigger budget efforts, if you just want to kill stuff in VR, then you’ll probably dig this.

What would I pay?  This is $20 US which I think is a tad high given just how many issues this has.  It’s serviceable and we really don’t see enough FPS shooters on the PSVR with respectable length campaigns.  If you are in the mood to kill endless hordes of grotesque mutants then this is for you, but I think the price on this should be a few bucks cheaper.

Xreal Games provided The VR Grid with a press code for this title and, regardless of this review, we thank them for that!