For those looking for a little high-tech stealth in VR then Covert offers just that with you the, VR user, in the role of a master thief contracted by a mysterious client to perform some insane break-in and heists right out the movies.  You aren’t alone as a 2nd player acts as your personal hacker while playing on a mobile device, offering a different view of the game and aiding you in your efforts as you avoid guards, cameras and traps and sneak your way to victory. 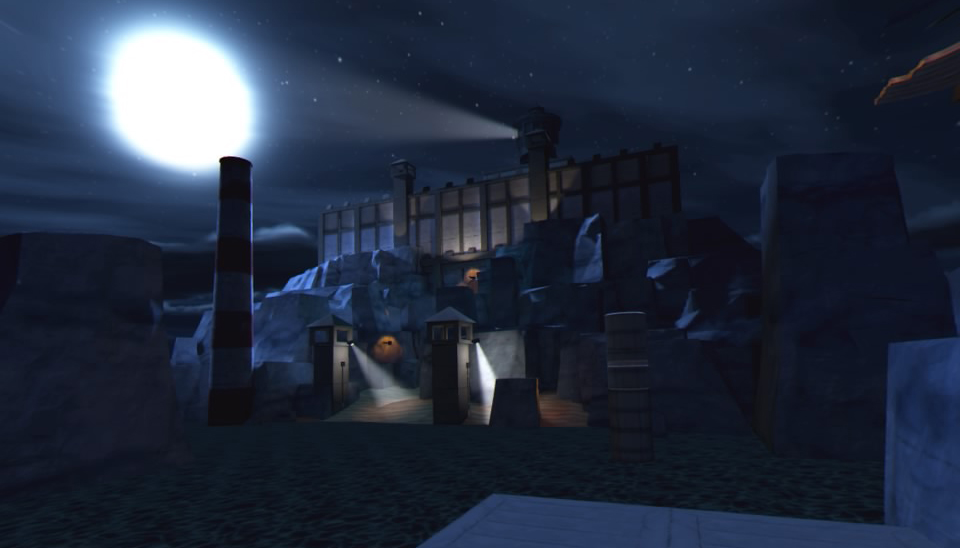 Your goal? Break IN to prison!

You can use a DS4 or the Move controllers with each offering their own advantages.  Covert offers click-turning and blinder options with full locomotion being available for those that can navigate in VR with ease.  With the DS4 you have the freedom of using thumb sticks which makes movement in a stage feel a little more natural and easier when compared to the button layout on the Move controllers.  With a DS4 however, you only have 1 tracked arm with your left lying at your side and used very little.  When you need to touch or grab anything, almost all these interactions are handled by gazing and pressing the Right Trigger button so instead of physically grabbing a lever and pulling it down, you simply look at it and press R and watch your hand act on its on accord.  That same interaction mechanic is used with Moves as well creating a large disconnect that initially confused me during the opening level and I ended up switching back to the DS4 as it just made for a more fluid experience.  Context sensitive mechanics pepper the game so if you are standing in front of a keypad you can use a laser pointer to press buttons or look at grapple point to launch your zipline or simply just press a big red button in front of you.  On the mobile side, all the interactions are handled by tapping or holding down on an icon on screen which will assist the thief in getting through the stage with both players having to often work in tandem to bypass an obstacle.

How does that co-op action work exactly?  A variety of puzzles pop up that typically require both parties to communicate their actions to the other.  At its most basic, the mobile player has a map of the entire stage, including guards, cameras and any interactable items, helping clue in the VR player as to what he/she may need to do next.  Beyond just being an overhead map, the mobile player will be required to open locked doors and distract guards through a few other means.  For example, the VR player may see a panel for a locked door or camera, but the mobile player can’t hack it until the VR player activates it by pointing a laser at it.  A nearby computer can offer up a distraction for guards by making it act weird for a few seconds with other puzzles requiring the VR player to read instruction in the headset to the non-VR player and vice versa making the game a very symbiotic experience, especially during the sections where you must press buttons at the exact time to activate a switch.  Additionally, the mobile player can temporarily blind nearby guards which becomes vital when they are alerted to your location. 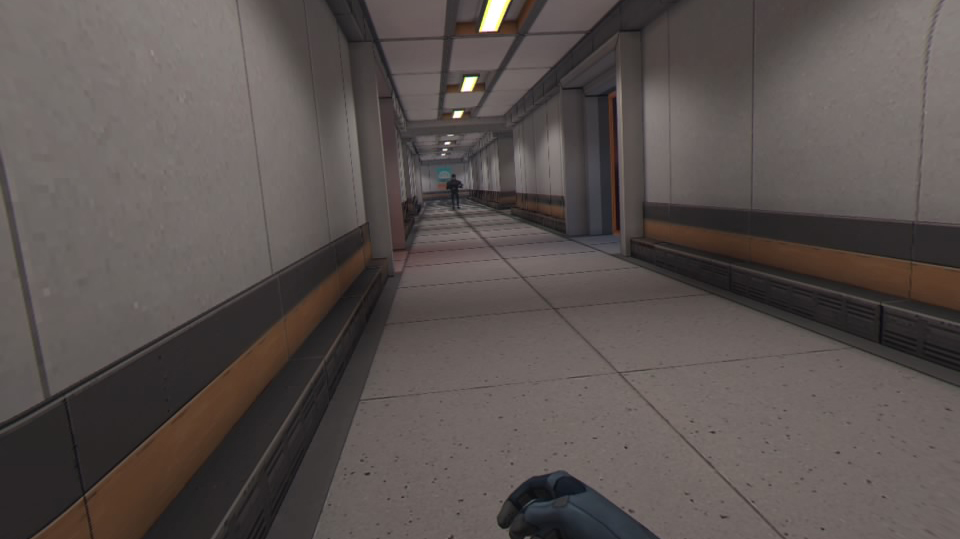 If they see you, you are dead.

As this is originally an Oculus Gear/Go title it does have a more simplistic and cartoonish look with some relatively simple textures and character models.  It doesn’t look bad but don’t expect to be blown away on this one.  What is off though is the scale of just about everything in the game as almost every object you can interact with is cartoonishly large.  For example, the Mona Lisa is larger than a movie poster and wall panels have numbered buttons the size of your hand.  The latter makes sense as it’s easy to hit the monstrous buttons but every time I saw one of these huge objects I could touch or scan, it made me feel like I was a small thief in a world of giants.  Guards are normal size and levels are cartoonish enough to make it easy to put that in the back of your mind, but when you see something that looks ridiculously large, it does hamper immersion.  You’ll visit a wide variety of locales through the 8-stage campaign from a museum to a missile silo, prison and a host more that do keep you on your toes and feel authentic enough to make the campaign settings enjoyable.  On the mobile side of things, it’s a little more minimal with bright colored lines making up the stage which for the most part is just a top down view with icons indicating items of interest.   When dealing with specific panels, items or traps the game may zoom in for a closer look or display special instructions for how to solve the next puzzle. 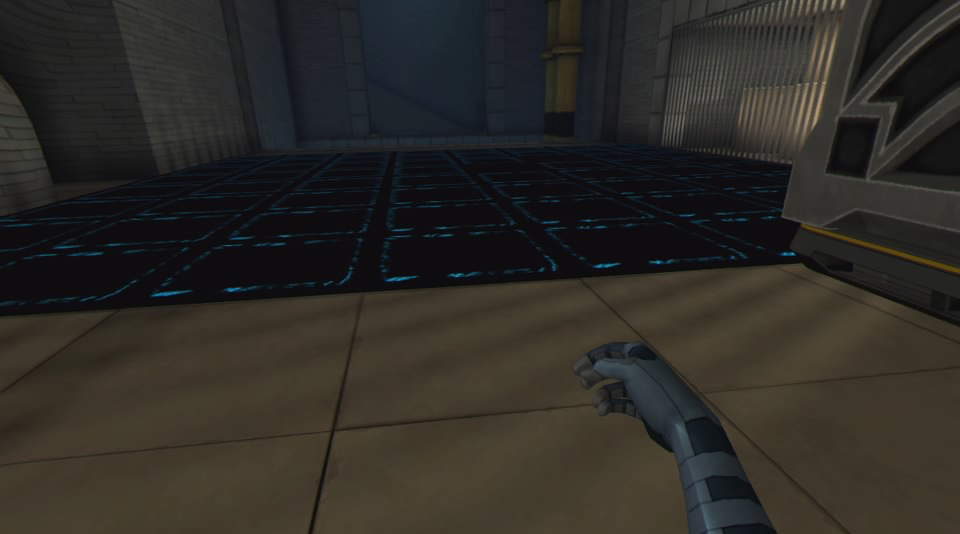 Accompanying you on your missions is your female partner who briefs you on the current situation and chimes in whenever an objective changes with both player getting to listen to her talk.  Depending on what you are doing some typical spy type music might be playing in the background or you may be left with only the noises of the environment to keep you company which is fine as you’ll be talking to your pal which tends to dominate any audio in the game.  Effects sound appropriate be it cracking a safe, grappling to high ground or just pressing buttons on a keypad with the audio on mobile devices being equally on point. 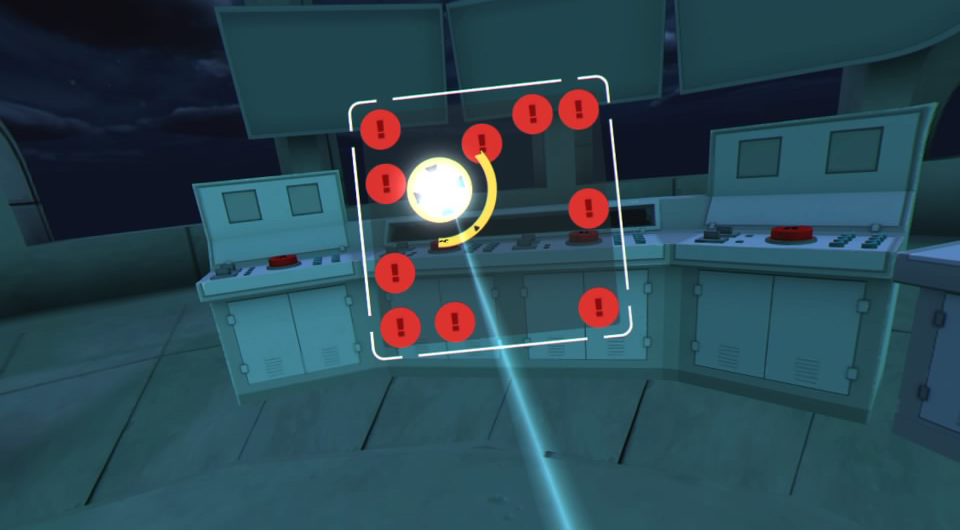 These barriers get annoying

The VR controls are the games largest issue but by no means do they ruin the game.  It took me a little while to realize that most interactions are by button presses so even though you can physically move your arm into position to pull lever or hit a switch, you have to hit a button activate whatever you are trying to touch.  One specific puzzle requires the mobile player to move a hacking reticle around a small grid without having it touch any red spots while the VR player focuses a laser upon it and was by far the most tedious task in the game and I loathed the few times it popped up.  The 2nd stage tutorial breaks down almost all the mechanics in the game save for one or 2 meaning what you’ll see in the first and second stage is a bulk of the gameplay in here.  Due to that fact I found it much better to play in smaller doses, typically 1 stage a day, just to make sure the game didn’t feel to redundant, more so for the mobile player then the VR one.  You can play with anyone, anywhere in the world but I get the impression this is designed more for couch co-op with both player in the same room as without the social screen showing off the VR players view, the mobile side is left to stare solely at a much less interesting screen plus you’ll have to figure out a way to talk to each other if you aren’t playing side by side. 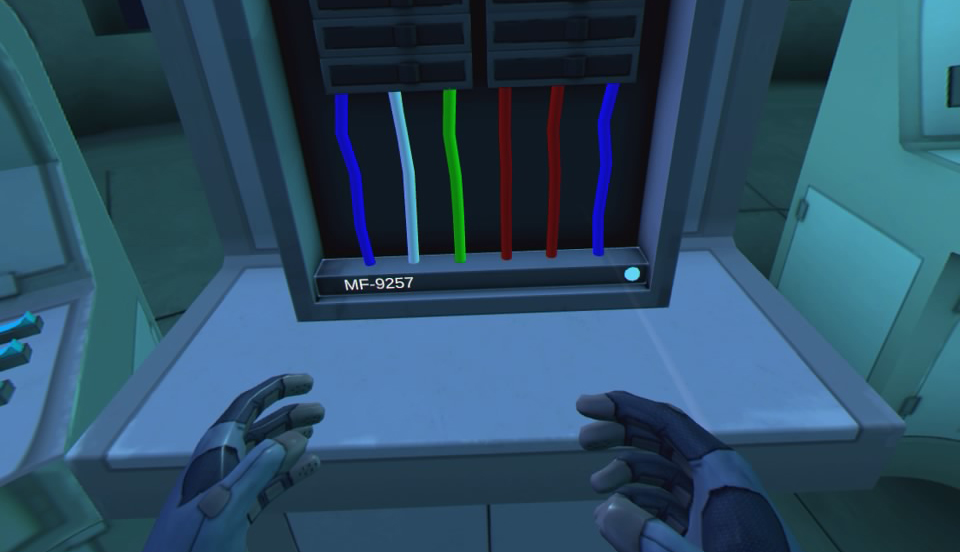 When in doubt, go with red…except in this game.

Covert is a fun little co-op title that makes great use of mobile and VR tech working together.  It’s not overly complicated and you can take your time in each stage should one player be ‘not-so-good’.  It’s the kind of title that could introduce VR to those resistant to the future of media as no matter which method you play, the headset or the phone, it’s relatively easy to pick-up and play and either user will have fun.

What would I pay? At $15 US, that’s a pretty easy ask assuming you have someone to play with as it has a 6-hour campaign and a little replay factor as you and your friend can replay stages, reversing each others’ roles.

White Elk Studios provided The VR Grid with a press code for this title and regardless of this review, we thank them for that!