Fans of fantasy action can rejoice as The Wizards has now arrived on the PlayStation VR after being available on the PC side of things for some time.  You play as an unnamed hero, sent back through time to stop Orcs from conquering the land and sending it to ruin.  It’s up to you to venture through castles and catacombs, searching for a way to stop these nefarious monsters, all while wielding some wicked spells. 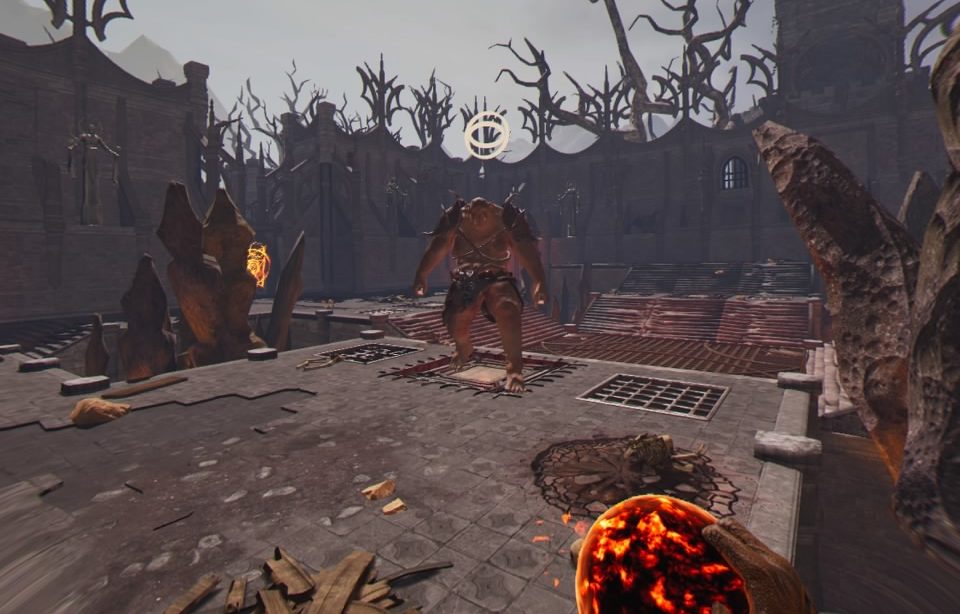 It’s time to light him up!

Whether you play on the PC side or PSVR, the controls are very intuitive thanks to a unique and fun spell casting system.  It should be noted that the game plays identically on the console or PC with the exception of the movement mechanics, which on the PC side of things use the thumb sticks, while on the PSVR the movement is mapped to the direction 1 of your Move controller faces, similar to Skyrim or Mages Tale.  I was a little worried that the lack of thumb sticks would negatively affect the PS version of the game and happy to report that I encountered no issues in this department and I instantly felt comfortable playing on either headset.  Locomotion options are available with teleportation being an in-game mechanic, or spell, you will need to navigate some areas and helps out in combat situations.  You can summon 6 spells, with each requiring specific hand gestures to create them.  A flick of your wrist spawns a fireball in your hands, or making a swiping gesture creates a shield that can block and deflect incoming attacks.  Punching both your fists forward creates a stream of lightning with other more complicated gestures creating an ice bow, Fire bomb or a set of crystal shards that can be launched at your foes.  No matter which spell you choose, when I successfully summoned that power, I couldn’t help but feel like a badass and as you proceed through the campaign, you can upgrade those spells for even more devastating effects. 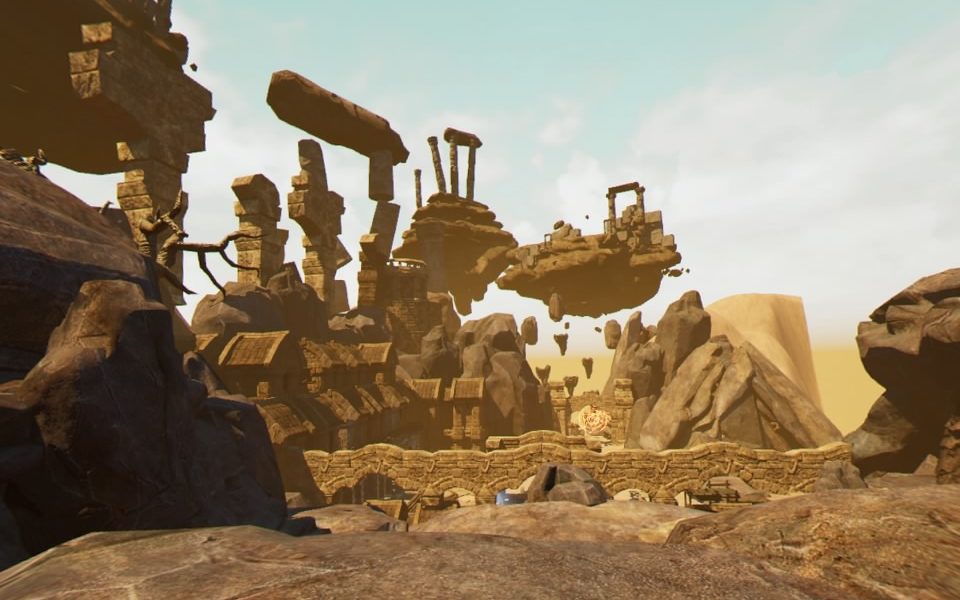 The campaign is broken up into 3 sections, each containing a few smaller levels.  There is only 1 set difficulty, but should you want more, or less challenge, you can find cards hidden throughout the campaign that add modifiers to your game like increasing or decreasing enemy health and speed or increasing their damage and each of these cards also has a score modifier to help aid you in unlocking each stages achievements which allow you to upgrade your spells.  Those achievements are specific scores to hit, which on the default difficulty are impossible to get, excluding the easiest one, so if you want those high scores, your going to have to up the challenge.  Each stage has its own online leaderboards so you can see where you stack both globally and with your friends which is a great little motivator to use the more challenging cards.  Besides the story-mode is the Arena mode, which tasks you with trying to get the highest score possible in 1 of 3 scenarios.  One has you defending crystals in a large level as the enemy horde assaults them, the second is just a straight up survival mode and the last is a tower defence type game that has you guarding the entrances to small town as the orc army tries to get past you.  Like the campaign mode you can attach card modifiers and upgrade your spells here so multiple plays should allow you to progress further as you become more powerful with leaderboards of course being here as well.

No matter PC or PS, The Wizards looks really good.  I appreciated the large-scale levels and the details that accompany them.  Whether you are roaming through a forested area littered with ruins, mines, catacombs and a desert, they all look and feel authentic.  The enemy models don’t quite match the level of quality in the stage design, but by no means look awful. Goblins, Orcs and Giants make up the bulk of the enemies you’ll face in the first 2 chapters of the game with the latter adding some spectres and fire worms to spice things up.  Hidden in each stage are chests containing the cards and 3 pieces of a heart and if you find all 3 in a stage, you get a permanent increase to your health and finding all the secrets in the stage will involve some in depth exploring as I only found all the items in 1 stage during my first play through the campaign.  Spell effects are great and it’s an absolute thrill to be toe-to-toe with those larger enemies as you both try to take each other out with the boss battles being notable standouts 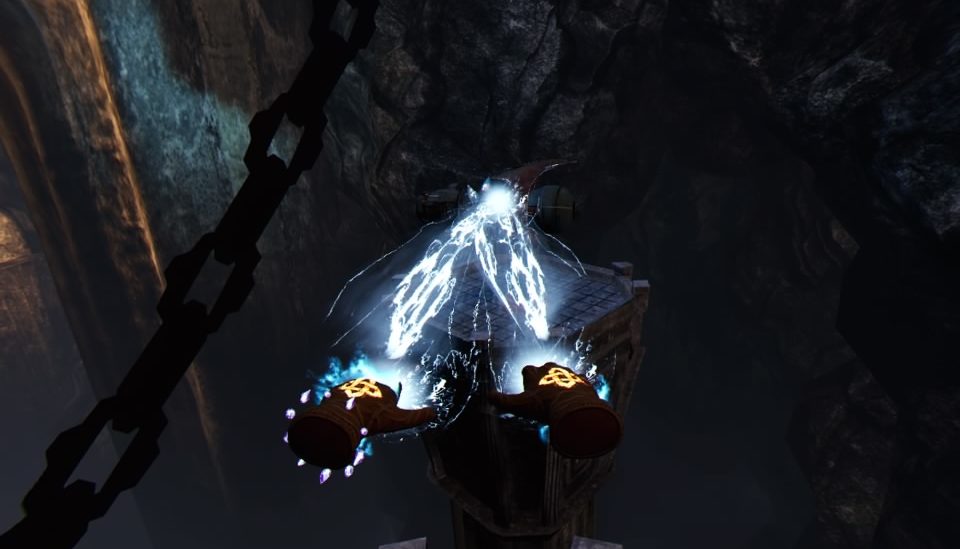 Accompanying you on your quest is the Wizard who sent you back in time, though he is a helpful voice only and offers tips and commentary while you navigate the campaign.  The Wizard also explains the plot to you as well, which is good, as I would have been a little lost otherwise and he is thankfully voiced by an actor with a fair bit of gravitas making his little quips a delight.  Orcs just grunt and growl in your direction but sound as they should with some action music kicking in whenever you hit the next encounter and overall the sound design in The Wizards is solid.

As satisfying as the combat is, by the end of the 2nd chapter I was feeling fatigued by the formula of wandering until I hit the next encounter, battling a few waves of enemies before wandering again until I hit the next batch of enemies.   Thankfully, the 3rd chapter introduces a few new enemies and the “aether” which allows you to summon a magical spear though removes your other spells making it fun to balance out when to use your regular magic or grab some aether to take out the baddies that aren’t affected by your standard spells.  There is some light puzzling in The Wizards which I appreciated as these moments also broke up the gameplay nicely and other elements like some portals you can walk through and floors that turn red-hot added some nice modifiers to the game.  I ran into the issue of spells just not summoning when I performed the proper motion, though this never broke the game as trying again typically summoned the spell I wanted, but it did annoy throughout my play on either headset.  The camera on the PS also seemed to be a bit picky with regards to tracking and I often found that grabbing for items, specifically in your main hub area, was a pain and took some effort to place in their respective holders.  Still, for the most part the controls worked great and as I said, you feel like a bad ass when everything works like it’s supposed too and you are taking out orc after orc, all with just a few hand gestures. 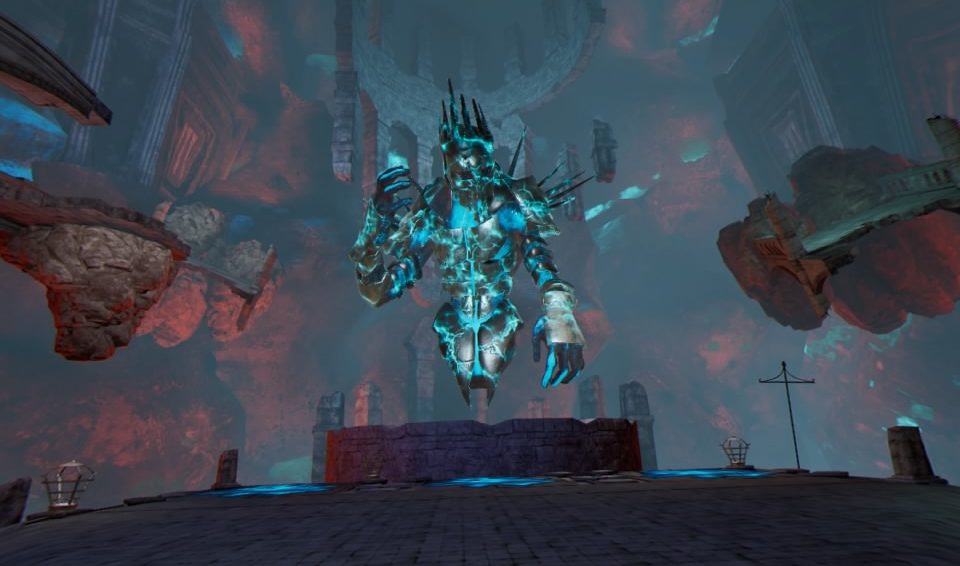 Each stage lists the estimated time it should take you to beat it with the entire campaign taking somewhere in the 5-hour range with the arena mode extending that time, though I was much less interested in those stages.  Still, The Wizards offers up a fun campaign with an interesting story and unique VR elements that really make you feel like you are a spell wielding hero.  If you are a fan of the Mages Tale or Shadow Legend then this fits right in with those games, delivering a great fantasy-action experience.

What would I pay?  The $25 asking price for this right on point.  The action does start to feel a little samey but I still enjoyed the campaign a lot plus, moving your hands like Dr. Strange and then unleashing a swath of destruction is a ton of fun!