Rollercoasters and VR are, in theory, a match made in heaven and while not everyone is a winner, there are enough experiences out there to make this gaming genre an easy one to demo to friends and family.  Atari has decided to try their hand at their VR market by porting over one of their better know franchisees in RollerCoaser Tycoon, allowing to you to create and ride your own crazy coasters and includes some first-person shooting action as well. 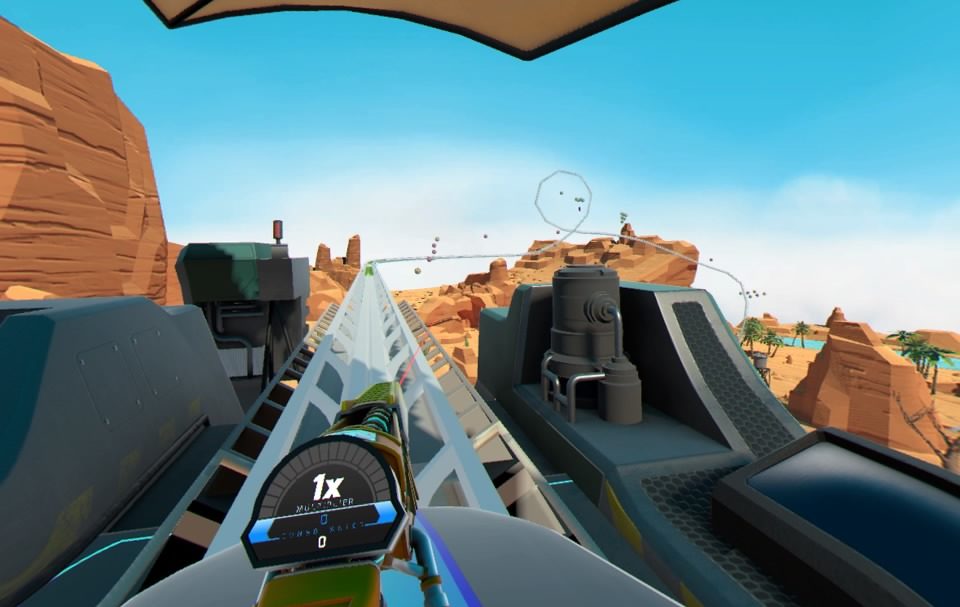 This looks way more exciting then it is

It’s a DS4 only affair and a bulk of the game, specifically everything besides riding the coasters, is done out of VR. To get familiar with the games controls there are campaign missions which give you set goals for each one like build ‘X’ number of tracks or use ‘X’ number of specialty sections, sometimes limiting just how many pieces of track you can use to accomplish these tasks.  It’s not very hard at all and really serves no purpose except to let you master the games relatively simple controls.  When you lay the track, it’s in 1st person mode (still cinematic) behind the next piece of rail being placed so it can be difficult to make the exact track you want without jumping in and out of track mode to see what your coaster looks like.  It’s a very simplistic mode that does let you build a decent course in only a few minutes or you can take as much time as you want to make something “crazy”.  Once you are happy with your creation, you can select the ‘Ride’ option to hop in where the game promptly places you in VR.  In this mode you are armed with one of 3  laser guns, unlocked from playing through the campaign, and must shoot floating orbs placed randomly around the course with each type of orb providing points or point modifiers.  Each course has leaderboards you can check out after a run and to get the highest score you need to not only shoot as any orbs as you can but build a course that lets you get those points easily. 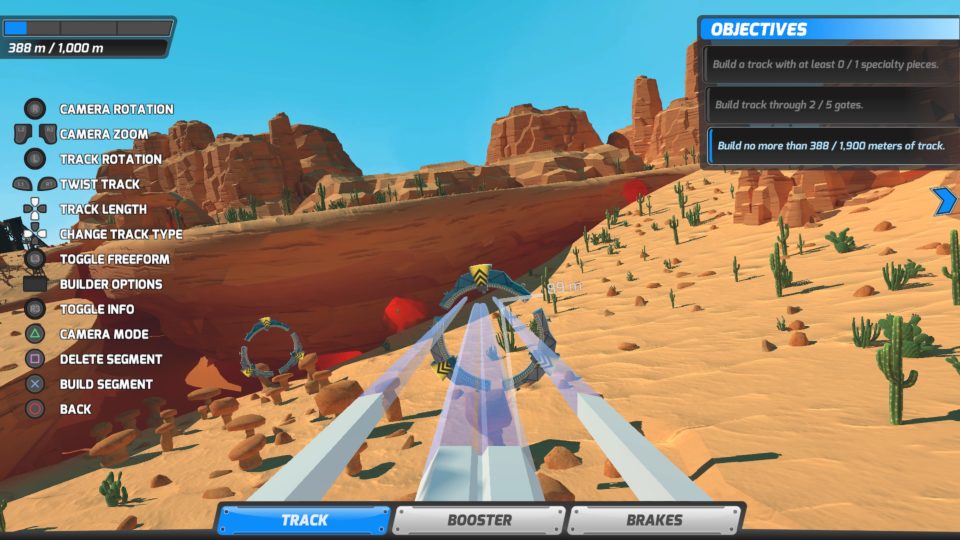 Joyride looks fine, though definitely goes for a minimalist approach.  There are only 2 environments to build your Coasters in, a city or desert and both these areas are very large allowing for just about any kind of course you can imagine.  Cinematic mode looks fine, though in the headset can be a bit blurry when you are looking at the diorama of your course and distant objects can barely bee seen, but you can freely navigate the course so that’s not really an issue.  In VR, things look great but there are not a lot of details to look at.  The city backgrounds are washed out and the desert one lacks and real textures at all but either does the job at putting you in the ride.  As far the actual ride goes, it looks good.  It runs smooth, I’m assuming 90 FPS and when you are going through loops and twists there is a decent sense of scale and vertigo as you look around and see the ground waaaaaay below you before you hit a big drop.  The guns and orbs feel out of place but fit the overall aesthetic.  The only sounds I can recall are just the effects of laying track pieces and the kachunk kachunk of the cars on the rails, and of course the shooty action and it all works. 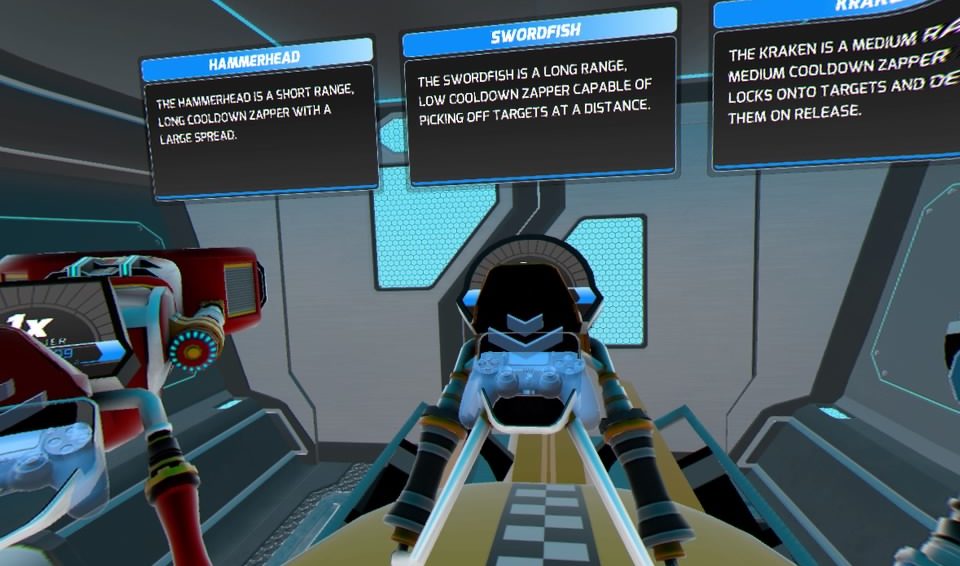 So that all sounds good, but a few missteps absolutely kill the fun factor here.  The biggest issue is the speed at which the cars go which is just too slow.  Considering that the main reason to dive into a coaster game is the thrills, Joyride is lacking any of them.  My first ride was an insane crawl, so I went back and added boosters all along the track and dove back in and instead of a crawl, it felt like a slow walk.  Even applying boosters to straight drops gives you just enough speed to think this could be good, but it caps out and just never gets there.  I added loops, twists, cork screws, you name it and while it always ran butter smooth, I never once felt the thrills of high-speed coaster.  The gun stuff just feels like a huge distraction to keep you from noticing how slow the game is by having you mindlessly shoot balls for points, which I could care less about.  All I want to do is ride a coaster at top speeds and get some thrills, but Joyride seems more worried about comfort or frame rates to do so.  In my 2-hour hour playtime I experienced 3 errors where my DS4 would stop registering forcing a full game quit.  There is a party mode that broke the game for me as well as once I tried to put a second player in, the game just kept prompting me to select another controller for that player, which I did, but whenever I tried to do anything after that prompt, it would just prompt me again for the controller over and over actually preventing me from doing anything until I went back to the mission mode to snap the game out of party mode.  Lastly was in issue where the loading screen to go back to the menu wouldn’t go away forcing me navigate the menu blind to bypass that.  Oh, and while there are a few pre-built non-mission courses, there is no way to share your creations or play others which also seems like a gross oversight save that I don’t want to play this anyway. 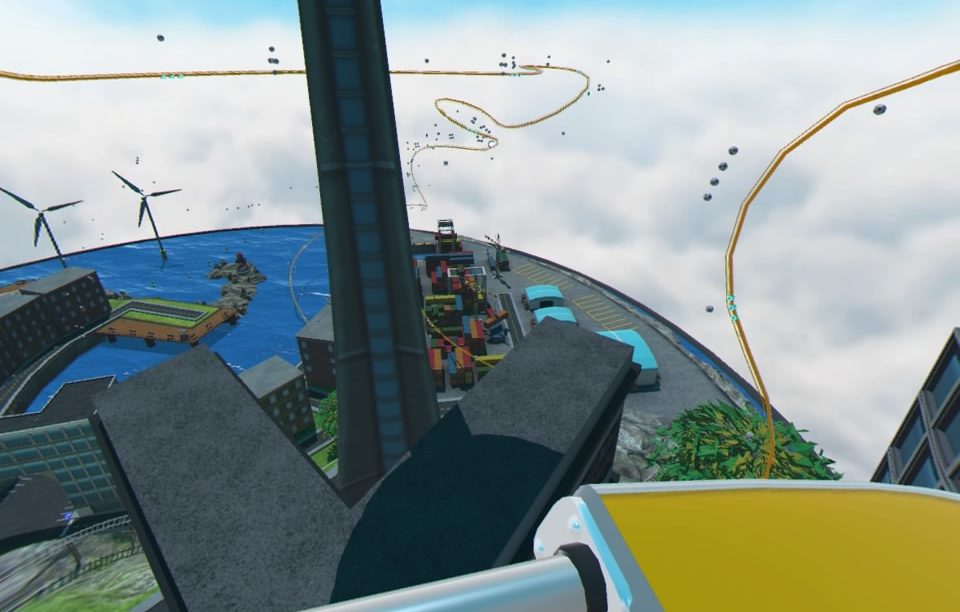 You can make crazy courses and reach incredible heights

RollerCoaster Tycoon Joyride is riddled with issues, all of which I could forgive if the ride provided adequate speeds to excite me, but they don’t, and I just ended up feeling like I was riding a Roller-coaster built for my great grand-parents.   The shooting stuff feels completely tacked on, glitches and errors plague the game and the highest speeds you get pale in comparison to the real thing.  The only people that should play this are those of us that get sim-sickness and are looking for a training game to get around that.  I just wish this was better.

What would I pay? I wouldn’t.  If I were to tell you could build and ride any coaster you could dream of in VR, that sounds like an insta-buy title but the ridiculously slow speeds kill that fun making the entirety of this game just feel like a waste of time…maybe it’s good for kids or people prone to nausea in VR but even if that’s why you want to buy it, wait for a sale.

Atari Inc. provided The VR Grid with a code for this title and, regardless of this review, we thank them for that!