If you can’t tell by the title, this is not a family friendly game, in fact…it’s far from it.   I’m actually unfamiliar with the Killing Floor Franchise and while I have heard of it, I don’t know too much about it and Incursion is my first foray into this brutally disturbing world.  The bulk of this game takes place in a virtual world (so meta!) that has been suddenly plagued by a virus that threatens not only the simulation, but the world outside of it as well…oh and it’s hilariously violent with a very dry sense of humor splashed in for good measure. 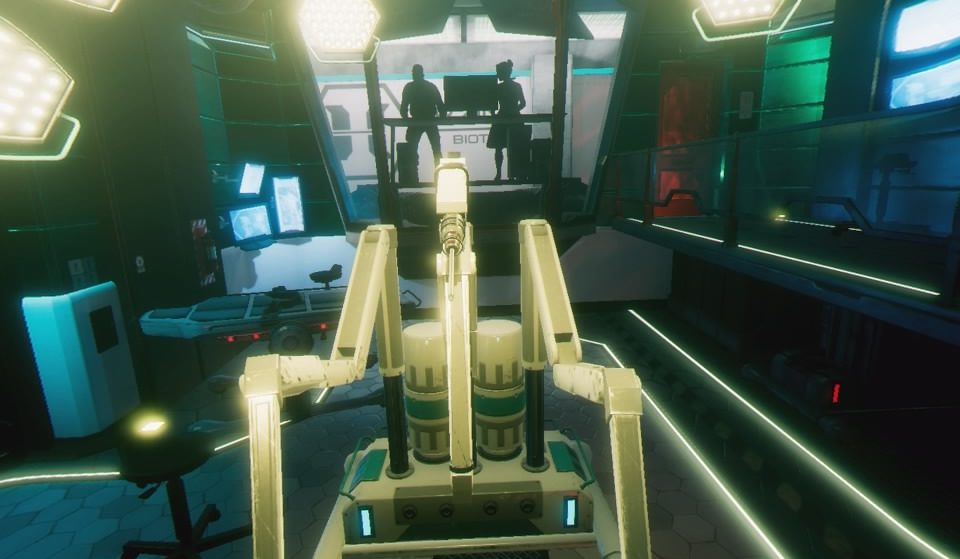 2 hands equals 2 weapons equals 2 Move controllers and thankfully the game can be played seated or standing, an option you first choose before the game even starts.   Killing Floor also includes free or click turning options as well as teleportation and free movement.  Once in game you can pretty much grab whatever the game highlights and use it as a weapon.  Whether it be pistols, knives an axe, your fists or even a Zombies head or arm, if you can grab it, you can beat the zombies down with it.  Collision detection is also pretty sweet and watching the enemy’s ragdoll after you lop off the their heads with an axe is oh so satisfying.  Slow motion is also activated after you have lopped off or shot off a few heads and gives you a few seconds to collect yourself or just delve out more damage.  Health and ammo packs are scattered all throughout the campaign and respawn so very rarely are you ever in dire straights, especially if you are tackling the campaign with a friend. 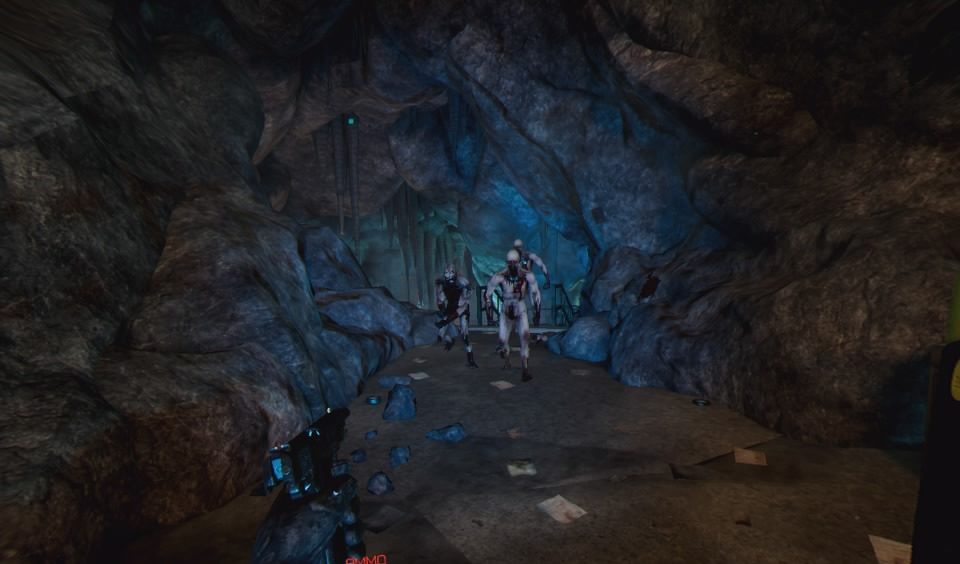 And so cometh the horde!

One of the most impressive aspects of Killing Floor is just how damn good it looks when compared to the PC versions of the game.  There is some visual fidelity here that we rarely see in VR, especially in first person shooters.  Enemies carry a tonne of detail and while each enemy only has 1 model type, they all look great, especially when they are in your face.  Lopping off limbs is a bloody good time and extra impressive when the enemies react to your hits in exaggerated fashion…try an upswing with an axe to see what I’m talking about.  The 4 stages; an old abandoned house, sewer, an office and a laboratory also offer some great atmosphere and mix up the settings, so each level feels almost like they are from a different game…in a good way.  The opening stage was one of the most unnerving experiences I have had in VR and I recommend playing through that 1st stage alone on your 1st play.  It’s not all perfect, with pop-ins being one of the more prevalent issues that plague the entirety of the game, and while the enemies do look good there isn’t a large variety of them and by the 2nd stage you will have seen almost every enemy type in the game.

The atmosphere would be nothing with some sick audio and Killing Floor shines in this department as well.  3D audio tells you which direction the enemy is coming from.  There isn’t much in the way of music and the campaign lets the action do the talking as you cut a swath of destruction through the enemies.  Along your journey you are in contact with a woman who is trying to help you traverse this corrupted virtual world and pops in to carry the story forward or give some not so subtle clues should you spend to much time an area. 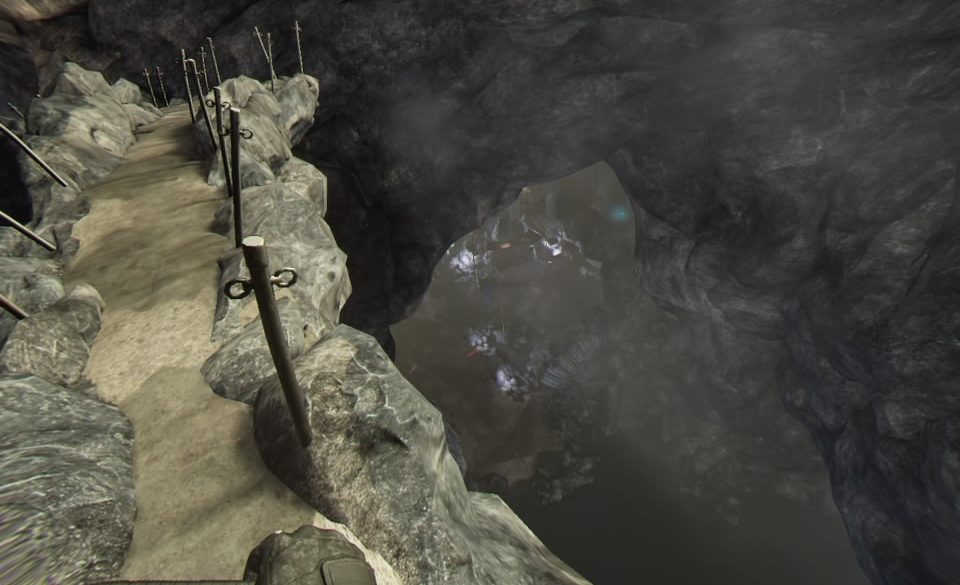 Probably my favorite view in the entire game.

Besides the campaign the other mode available is Holdout, which is an endless horde mode.  You can pick your map and try and survive as long as you can.  The longer you last the more dangerous and overwhelming the enemy waves become, though to help you out with that are items and weapons that appear the longer you survive.  Given the nature of this game, Holdout didn’t hold as much love for me as the campaign just because the action, though frenetic, gets kind of redundant. Thankfully, whether it’s Holdout or the Campaign, you can easily join a multiplayer match and tackle the mutated undead horde with a friend which makes either mode way more replayable.  Co-op does support in-game voice chat so you don’t have to worry about partying up to talk to each other. 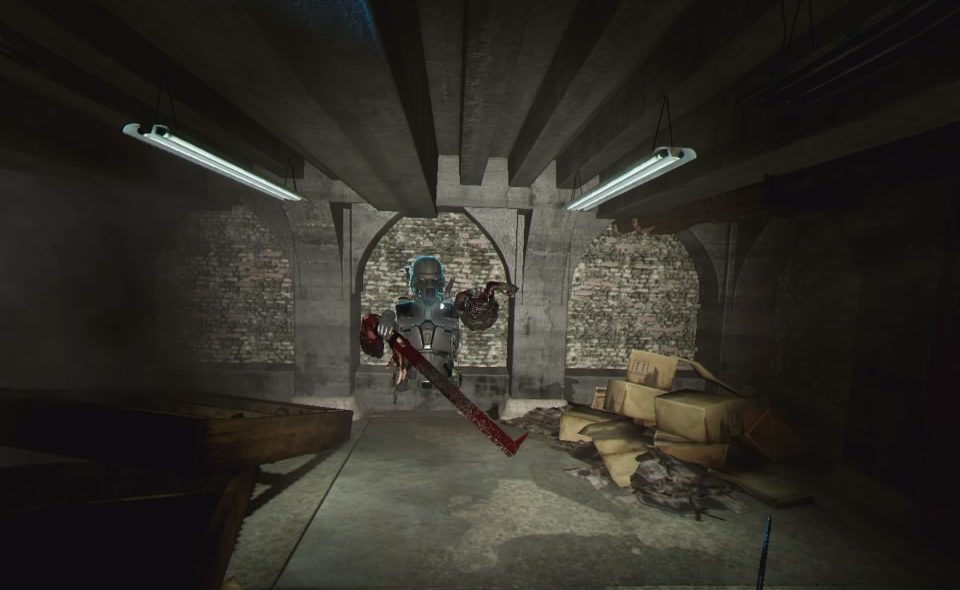 When playing with a pal, it’s fun to show off what’s left of your kills!

As much I enjoy Killing Floor, I’d be remiss if I didn’t mention a few flaws that affect the game.  I experienced 2 game crashes in my play, one in the farm level which the devs have already addressed and 1 during a multiplayer co-op session.  Another larger issue is with co-op play.  Whether in campaign or holdout mode the host seems to be lag free while the guest suffers lag issues, regardless of your internet connection or PS4 model.  The 3rd stage has a momentum crushing sniping section that doubles down on itself with ridiculously long sniping ‘boss’ battle at the end of that stage.  I also experienced some tracking issues, mostly during the sniping section, but thanks to the user friendly ‘item pick-up’ mechanic, in game items are very easy to pick up off the ground.  There are also only 2 modes of difficulty here with Normal being easy and hard being really hard.  Should you play with a friend the difficulty seems to scale up offering a little more challenge and keeping you both busy shooting, slicing and dicing.

Those issues may be a larger factor to some, but minus the multiplayer crash, never really affected my game to much as there is a decent checkpoint/restart system in place taking you back to almost the exact moment you died.  The shooting is fun, but dual wielding knives, axes and swords is way more exhilarating.  The enemies react to any impact so get creative.  Beating them down with whatever you can find; heads, arms, canisters just your fists is a blast until you find something a little deadlier.  Even with the lag issues the multiplayer is a great addition the amplifies the fun 10-fold.  Some light seek-and-find puzzle elements are at play which for the most part mix up the action nicely and really, minus the sniping section, the game is non-stop action from beginning to end. 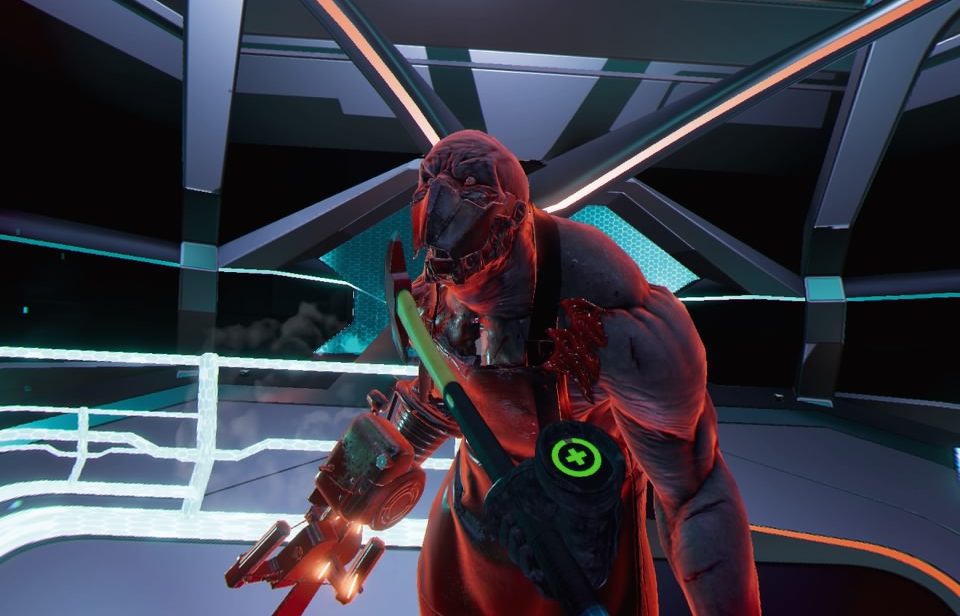 maybe he just wants a hug?

Killing Floor Incursion is a bit of fresh air when it comes to First Person VR Shooters.  The action gets intense (on Hard mode) and the ragdoll physics are great fun whether your cutting off limbs, beheading assailants or just beating them down with a weapon.  The campaign took me around 2 and half hours to play through, and while I wouldn’t play through again by myself, I’d happily join up with someone for a round in co-op.  The Holdout missions offer some longer-term gameplay, though like I said, they can get a little mindless.  Even with the issues I had, I can’t deny just how entertained I was during my playtime and if you are in the market for an over the top horrific shooter, this will scratch that itch nicely.

What would I pay?  the $30 asking price for this is right on point with a fun, whacky and gore filled campaign and an equally gore filled horde mode.  This is an FPS unlike many others and the highlight moments in here are worth the price of admission.

Tripwire Interactive provided The VR Grid with a review code for this title and, regardless of this review, we thank them for that!