Escape the Room games have been very popular of late on many formats, from smartphones to PC.  I’ve even participated in two live action “escape the rooms” over the last few months involving Zombies, but again we have a genre which is well suited to a VR title and Oasis Games have released a creepy, horror puzzler which is certainly one of the better horror experiences which have been published for Virtual Reality lately, but that’s not to say it’s a great game. 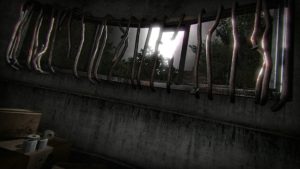 Think someone’s trying to tell you that they don’t want you to leave?

Firstly there are two versions available on the PS Store, the PS4 version containing 6 chapters while the PSVR version reviewed here, is cheaper in price but only contains 3 chapters. These chapters are relatively short and you will probably complete the game within 2 hours or so.  Disappointingly as there are 3 chapters effectively missing, the story doesn’t come to any kind of  satisfying conclusion.

The said, the story involves yourself, Matthew, who has received a letter from your sister, who has gone missing.   You awake in a room, unsure of where you are or how you got there and why. Comparisons of the horror movie series, Saw, come to mind, as the room is suitably creepy with padlocks on windows, eerie mannequins above your head, an old TV playing static, cock roaches scuttling amongst the debris and broken drains on the floor. Your every moved watched by cameras and a mysterious voice who communicates to you from monitors or graffiti filled walls. It’s all very atmospheric and serves the genre well, it’s creepy rather than relying on monsters and jump scares.

Movement is accomplished with the PS controller and involves left directional stick to move forward and back while right stick snaps your rotational view in segments. After a good deal of play I didn’t experience any simulation sickness at all and I am quite sensitive to the feeling. This is helped by the fact that you move about at a very slow pace. This can also be quite frustrating at time as you will be wanting your character to move quicker when you are exploring corridors and going from one end of each room to the other.

The puzzles themselves are probably as you expect, examining items for objects, some of which you have to combine, figuring out math and password riddles that generally have a linear approach by solving this to move onto that. I did find you had to be the perfect distance away from object to interact with or otherwise it would not register your intention, this did lead to a few moments feeling I was stuck but through no fault of my own. 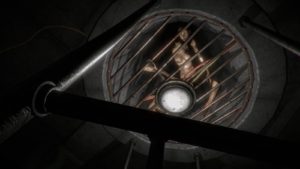 Just who put those creepy mannequins above my bed?

The graphics are crisp and detailed, even when you are very close up to objects, as is in game text, the sound effects  are sparse but the two coupled do add up to a game world which is believable and immersive.

For those of you who enjoy the puzzling aspect of escape the room games, the eerie and dank setting the story pervades and the game dynamics which they provide, then you will have automatically made up your own mind whether this title is down your dark alley and whether you will appreciate it or not. A satisfactory way to escape into a creepy VR world, or not escape, as the case may be! It’s fun, but the missing content is game breaking and the plodding pace will have you screaming for a run button.  Dying Reborn a solid title, but the missing content hurts the overall product.

What would I pay? A price point for the 3 chapter VR version is £7.99. Slightly expensive for the short play time and unplayable nature. £4.99 would have been more favorable.