SABRE, for myself, hearkens back to my 80’s childhood when Voltron was one of the many ‘in things’, and I know there is a newer version of that show, but that’s not what I relate too.  You take control and drive one of the SABRES (Synthetic Animal Bio-Remote Entities) which come in 1 of 3 forms; a wolf, rhino or panther and face against other players in arena style deathmatch combat. 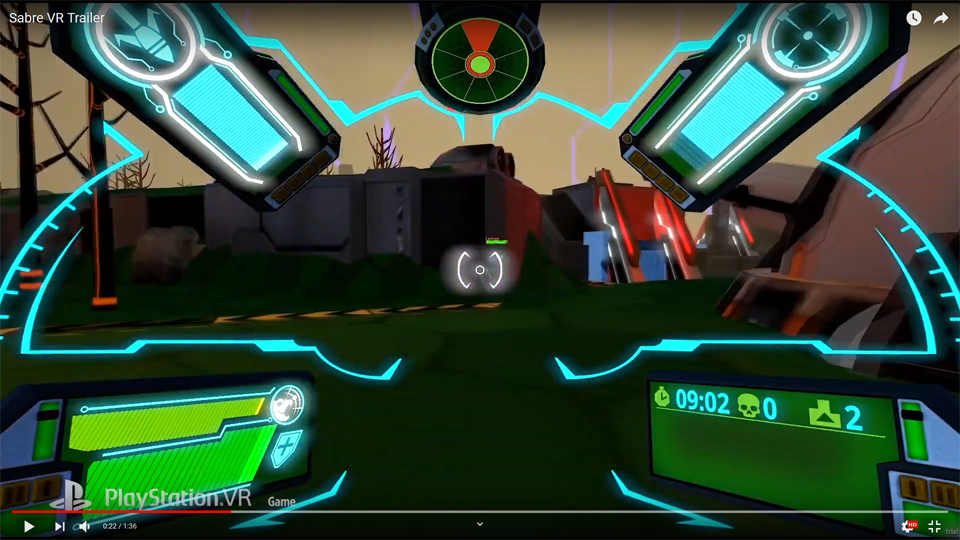 SABRE utilizes 2 Move controllers which at first seemed like an odd choice.  By pointing your Moves forward, you accelerate and tilting them up or even toward you will slow down or reverse your direction.  To turn you need to tilt the Moves in that direction with face buttons using your weapons and abilities with your greatest ability, jumping, being of the utmost importance in both battles and navigating some of the taller stages with headset tracking used to aim your weapons.  Each mech type comes with stock weapons but has individual stats and abilities that make each play a little different from each other.  The rhino is slower than the rest, but packs more of a punch, especially with his ram ability, which makes very short work of anyone it connects with.  The Wolf can activate a temporary cloak and is the fastest of the 3 with the panther landing somewhere in the middle and can use his ability to see everyone’s position on the map.  Loot boxes are present here and are given out at the end of each match with the items given being random but range from common to extremely rare weapons, the latter of which are obviously more powerful.  You can sell weapons you don’t need and spend that money on more loot boxes or slots to store the weapons to ensure you have an arsenal to choose from.  Currently only online deathmatch is available with no single player component existing at all.  With that said the multiplayer does support up to 12 players and the message on the matchmaking menu states that Battle Royale mode is coming soon.  Match ups are chosen at random, though you can party up in the game, whereupon you are thrown into 1 of 15 maps and set to unleash all hell upon anyone you can find. 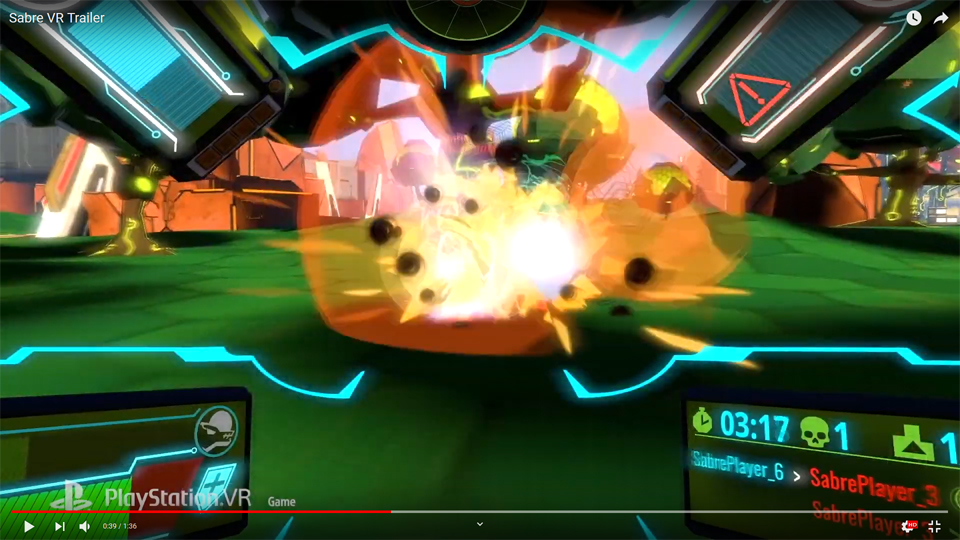 Seeing your targets die a fiery death is always exhilarating.

Visually, SABRE is no slouch offering visuals representative of the cartoons this game is inspired by.  I wouldn’t go as far as saying the game looks cell-shaded, but there is definitely elements of that used on all the models.  A very contrasting color palette is also used in many stages with darker arenas highlighting the explosions and weapons fire. The variety in the levels from neon colored forested areas, dark grey fortresses, bright colorful structures and everything in between keep the game feeling fresh.  Many levels mix and mash the environments making for dynamic, though sometimes confusing layouts and no matter what stage you are on, each one is a floating arena meaning there are many edges you can fall off and die. Your 3 mechs all look and animate well, and their colors and weapons can be customized to your liking.  The game plays in first-person with you at the helm of each machine with your HUD being physically all around you.  Your screens display weapon types, ammo counts (which are infinite, but need to recharge), shield meters and an info screen lists all the action happening in the game via text message.  I found the physical HUD to be a little intrusive at first, but once I payed attention to what it was telling me I was happy it was there as it made the whole ‘driving an animal tank’ idea seem a bit more realistic. 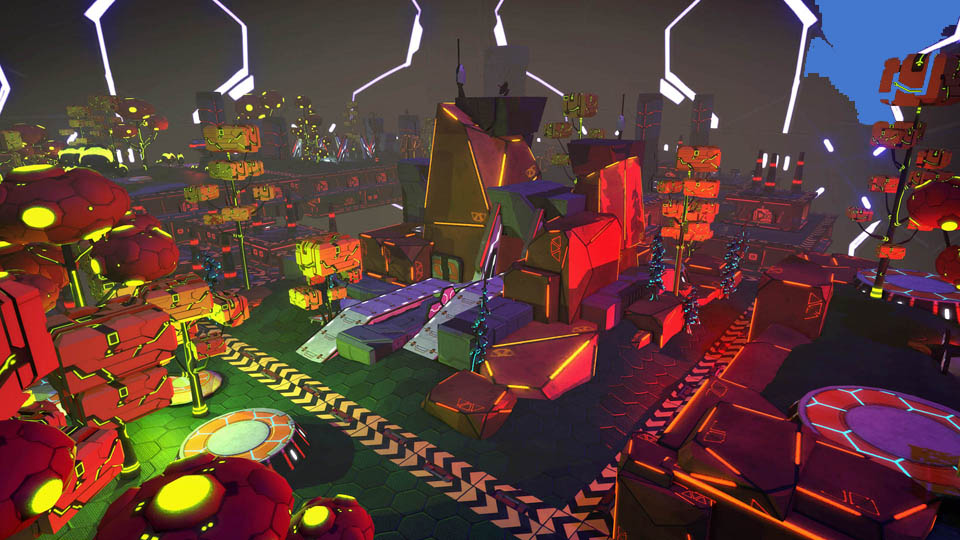 Many of the stages are massive in scale!

Audio is more of mixed bag as the game sounds great, when it’s making noises.  A bulk of this game is silent save for the sounds of combat which is very noticeable if you spawn on the far side of a map, away from any battles and have to chase down an opponent.  Your big giant mech makes almost no noise whatsoever and save for the last minute of a round, no music plays making everything sound unnaturally quiet.  I’m not saying I want to hear every grunt and groan of my mech, but the silence that pervades a bulk of this experience does take away from the immersion of it all.  Typically in shooters, when you get a kill there is some kind of audio or visual response highlighting your victory, but in SABRE, it’s just a line of text on that small screen to your right, meaning if someone steals a kill, you may not have a clue that happened or the reverse where getting multiple kills yields no audio reward (Double Kill or Revenge…that sort of thing)  and I still had to check that little screen every time I got a kill just to make sure I actually did.

While my initial impressions of the game were a little more awkward then anything else, once I settled into the gameplay and mechanics, I had a lot of fun.  Matchups can be difficult to find and the largest game I played (and organized) was 7 players and we were all having a blast.  When you first start the game, you may feel a little outclassed as your foes will more then likely have better weapons but stay the course and it won’t be too long until you are running and gunning on an equal playing field.  The lack of any kind of single player mode is a definite drawback, though I typically found at least one other person to play within a few minutes of searching.  Spawn points are currently an issue as well as I often found myself spawning in the air or near a cliffs edge already moving towards my death with no way to stop it.  Other times I would appear right in front of someone making me an all to easy target and when these kinds of spawns happen back to back, it can be frustrating.  Lastly would be the lack of multiplayer options and a better lobby system.  Battle Royale is coming soon, but I’m way more interested Capture the flag, team death match or king of the hill and while the lack of player-base explains why those modes aren’t here, their exclusion still feels missed. 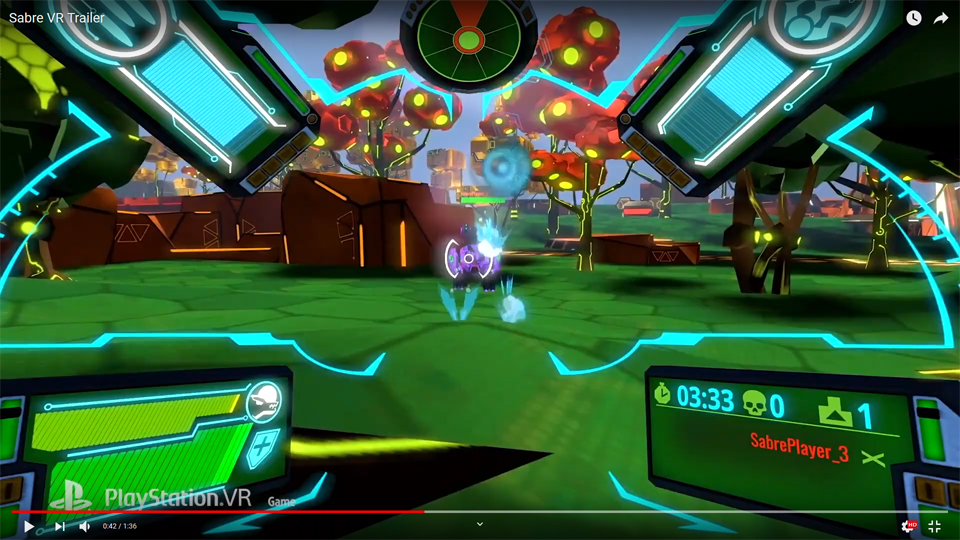 Line em’ up and take em’ down!

SABRE is a lot a fun, despite the issues I brought up.  While some things can be easily fixed like the audio issues, others can only be remedied largely by expanding the player base and with so few multiplayer shooters available for the PSVR, if you are curious, I say give this a shot.  The gameplay is tight, and the loot boxes provide an alright sense of progression.  If you are looking for a slightly different competitive shooter, SABRE has a great base to build off but only time will tell if this will grab the masses.

What would I pay?  This is worth the $20 save for the fact that finding a match could be fairly difficult at launch.  A game like this lives or dies on a dedicated player base and I would love to see this dropped to half that price to really entice people to hop in.  It’s on par with Starblood Arena and Space Junkies, at least as far as fun factor goes, but I think needs to see a decent influx of people soon or it may just become nothing more then a blip on people’s VR radars.

Firepoint Interactive provided The VR Grid with a review code for this title and, regardless of this review, we thank them for that!