Ah the bow and arrow… a staple in the early stages of VR and remains one the best real-world actions emulated in our headsets.  We have seen all manor of games utilizing bow mechanics from open-world epics, tower defense games, post-apocalyptic adventures and fantasy brawlers with my point being that the archery-based VR genre is a crowded one.  QuiVr has been out on the PC side of things since June of last year and offers a familiar wave shooting experience but adds a whole bunch of unique variables to separate it from the pack. 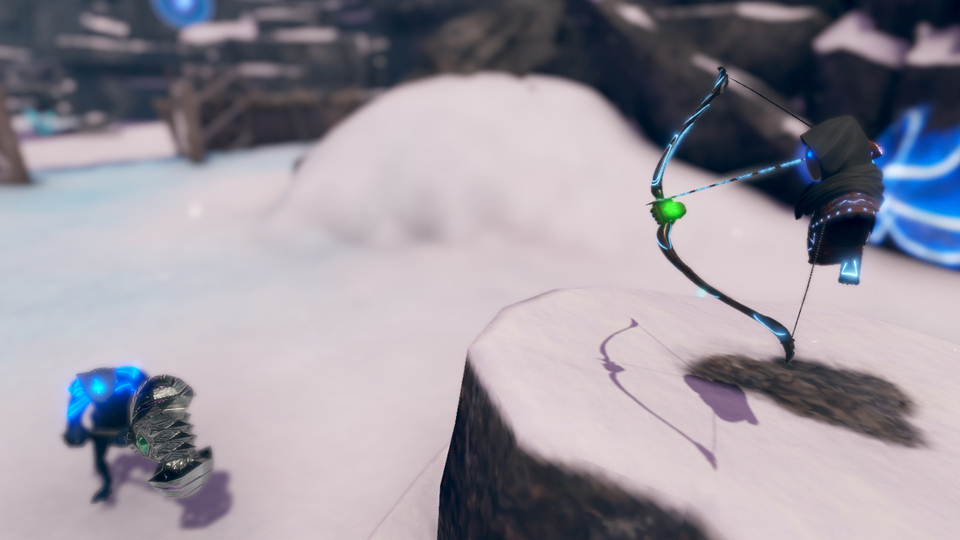 Utilizing 2 move controllers, the archery stuff is exactly what you would expect, meaning you reach over your shoulder to grab an arrow, bring it to your bow to knock it then pull back and release.  This is a stationary affair, but you can teleport to select points around the map by shooting orbs floating over those spots.  Behind you is a foggy window which is a little intrusive, but keeps you facing the camera and unfortunately, at the time of this review, only click-turning is available.  The stages are all cliff sides ensuring you always have a decent vantage point on the enemy horde below who are trying to get past you and onto the gates protecting your home.  Besides the bow and arrow, you can also summon magical grenades which have a cool-down period, so you need to be a little more selective when you decide to toss one at the enemy.  There is no real story here and the emphasis is on team work and firing non-stop arrows.  Each of the stages has a randomized boss at the end so you never know what you’ll face and when you get to said boss, live or die, you are rewarded with random loot that will strengthen your attacks.  The more you play the more powerful you may get unlocking specialized arrows and other fun abilities and grenade options.  You can play the game alone or with up to 3 other players online with each additional player increasing the number of enemies you’ll be facing.

QuiVr looks good with varying environments and enemies.  The same basic model of bad guys will appear, but thanks to a little TLC, if you look closely, you’ll notice that they don’t always look the same maybe being right or left handed or wearing different pieces of armour.  Unless an enemy is right in your face though, they can look a little rough at a distance, making smaller details unnoticeable and pixelation a constant issue.   As you progress further and further in a stage you will see more and different enemies that come from high and low.  They range from simple, hammer wielding orcs to flying beast, crab-like monstrosities and a bunch more with each behaving differently.  Each stage is broken up by walls and once you kill enough enemies, you will be teleported to the next barrier, which can magically defend itself from attack, but can be easily overwhelmed if you let to many foes past your guard.  Every stage ends in boss battle, but you never which boss you may face or even which stage you’ll be playing in, making every playthrough a little exciting.  You may be in a snow-covered lands or grass lands, deserts or more surreal ones like one seemingly bathed in shiny black ooze.  As for the bosses, while most involve pattern-based combat, at least one is a visual puzzler with your team tasked with tracking and shooting balls hidden in spheres like the classic ball in a cup parlor trick.  The boss battles are monstrous and have you facing a giant sandworm, deadly plant and a few other that will put your skills to the test. 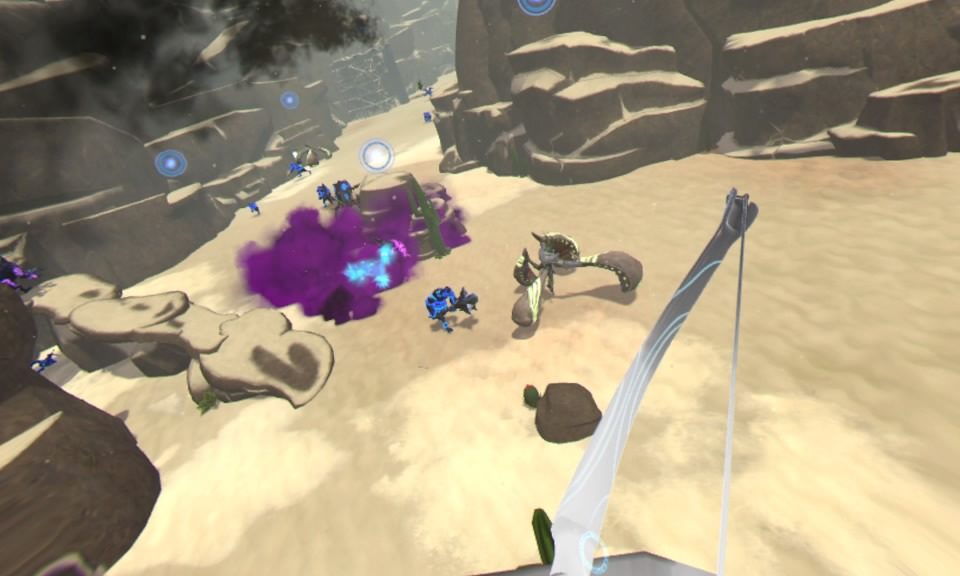 The enemies come in all shapes and sizes.

The music is fantastical and epic and every time I noticed it, I couldn’t but get more caught up in the non-stop action.  Effects also sound superb with everything from knocking your bow to hearing the tension in the string as you pull it back.  Monsters make all manner of monstery noises with them reacting to your shots accordingly.  If enemies reach your gates you can hear them hammering away it letting you know to up your game with the overall audio package being solid, if not very busy.

When I first played alone, I was incredibly underwhelmed as it just seemed like a very slow paced-wave shooter without much purpose.   Once I died, I visited the online portion which is the way the QuiVr is meant to be played.  The number of enemies you face scales up with the amount of players in the game making things feel hectic much quicker.  This is endless with the goal being deep runs and new loot with the game getting dramatically harder the further you progress…like insanely harder.  During each “round”, the enemy can destroy a gate or 2, pushing you back but still letting you try and claw your way forward.  Reaching a boss is a no-fail situation and beating it will yield some new loot and a continuation forward on to harder troops.  As I figured out all the games mechanics, I really began to appreciate just how much depth the mechanics have with what feels like infinite loot types and a well-balanced combat system.  With that said, it’s all a little mindless with you just diving in with a few friends and unleashing as many arrows as possible to chase leaderboards.  Don’t get me wrong, when I lined up a match and joined up with others, it was an absolute blast, but if no one was playing online, the drive to play this alone is non-existent.  Similar to games likes Trickster VR, the fun you pull out of this will largely depend upon your love for looter/shooters and whether you can find people to play with online. 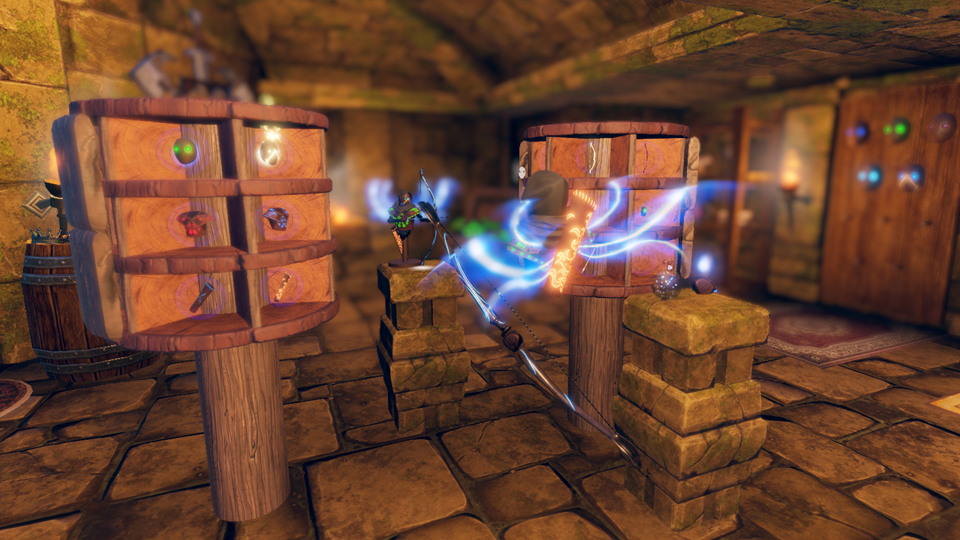 There is tons of loot to acquire!

QuiVr is a technically sound game reliant upon multiplayer action which has me a little divided on how I feel about this game.  It’s a lot of fun to play through a few rounds with friends, especially when the difficulty starts to push you to your limits and whenever you finish a round, you always get some type of loot allowing for a feeling of progress.   That said, there is no real end to the game, just start over and start shooting and see how far you can get, which for myself isn’t really a motivating factor to play games.  If you dig non-stop multiplayer action, this delivers a fun and fantastic gaming experience, but if you are looking for some single player fun, or something with storied content, you best look elsewhere.

What would I pay? QuiVr is priced at $25 US and I think some may find that price fair given the potential hours of fun you could have.  For myself, I just found the game to get a little redundant and lost any interest to play if no one was online and because of that, $15 sees a little more apt.

The Munky provided The VR Grid with a press code for this title and, regardless of this review, we thank them for that!