I’ve been playing VR games for over 2 years now and I’ve started to wonder if maybe I’m getting a little jaded and perhaps my love for VR may be waning and I don’t even realize it…then a game like Transpose comes along and reminds me why I love this medium.  Transpose is a puzzler unlike any other and tasks you with not only manipulating time, but gravity as well to solve more and more complicated and intuitive puzzles. 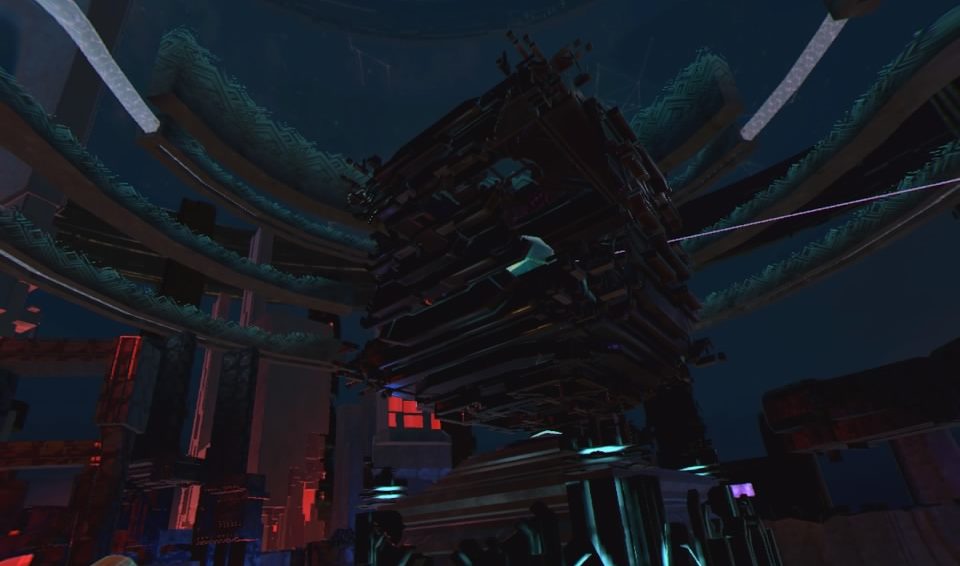 The scale of some of these areas is amazing!

You are going to need a couple of Move controllers as this plays like most 1st person titles in VR.  You can walk forward by pressing the Touch button and can grab and manipulate levers and other objects in each stage.  The world around you is broken and it’s up to you to restore it by placing cubes found in each level into a cube receptacle.  The core mechanic is the ability to reset time, while keeping your last copy intact, essentially creating echoes of your former selves as you control the next you.  It’s hard to describe, but basically, you’ll want to perform a certain action, reset yourself and save what you did and start over so while on your first life you may have pulled a switch to move an elevator, your 2nd life will be waiting at that elevator to get you to your goal.  Every time you reset you can either discard that echo turn or keep it and as you progress through the 35-stage campaign, you’ll unlock more past selves to be used in each level.  In one stage I had to navigate each life to 3 switches controlling platforms moving around a tower while the 4th and 5th lives were used to toss and climb the platforms to the top of the tower.  What’s crazy is this all happens in real time so there is a compounded strategy necessary when you need to use a lot of ‘you’s’.  Spawn points in each stage can be activated so when you end a life, you can start at a new location in that stage and the latter half of the game introduces gravity which flips the whole game on its head.  In these stages, spawn points may be on walls or ceilings and when you chose that location to start, the entire level is flipped so that angle now looks proper to your first-person view with gravity changing to match that.  Much of the game’s puzzles involve throwing those cubes over large gaps and when gravity is changed, timing becomes key in ensuring you can be in the right place at the right time to catch a cube (or 2).  An additional teleport mechanic is needed to cross gaps with the only downside to the controls being the lack of option for free turning meaning you need to click turn 30 degrees at a time to navigate stages. 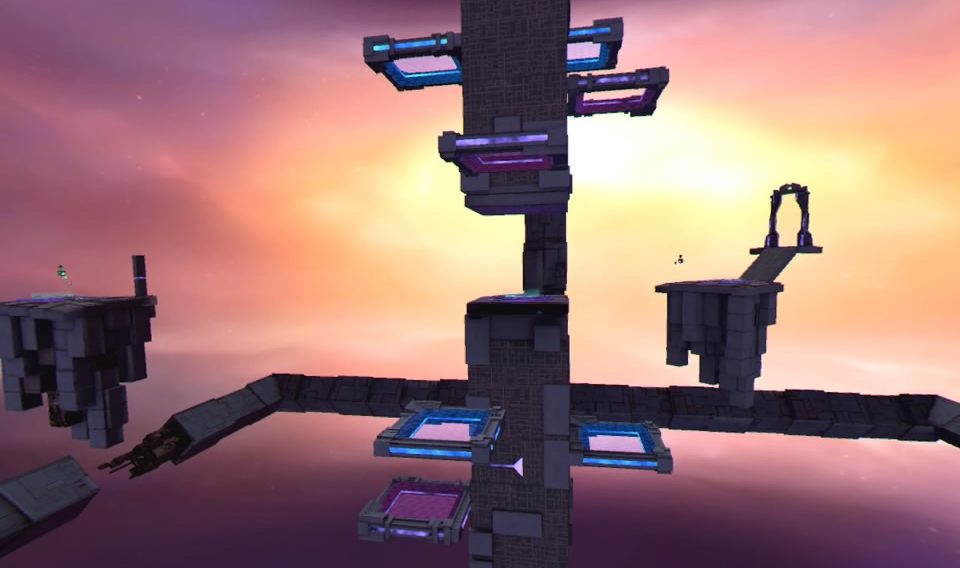 This stage had me stuck for sooooooo long!

Transpose looks really good at times and a little underwhelming at others with the overall presentation being pretty solid.  The levels you are in are relatively small, but the scale of the hub stages and even just how far the background images look is impressive, though the backgrounds are just flat images which does hamper the illusion of being in the environment.  Character models (you) remind me SUPERHOT men with you having a shiny, digital look akin to that game, but with a little more color though lacking any real detail.  Your old recording are just torsos and up, but it’s so fun to watch your old you’s as they perform all the tasks you did while waiting for your turn to keep the action flowing.  To speed things up a bit is a slider bar on your arm that allows you to speed up and slow down time which is an absolutely stellar feature in the larger stages and streamlines the gameplay nicely.  Each stage greets you with a quote that applies to the stage in one way or another and once a stage is solved, you restore a heart which when combined with the other hearts, helps bring the world around you back to life.

The soundtrack is very emotive eliciting feelings of wonder and mystery as well some calming and soothing tones and really fits the action perfectly.  This is a thinking man’s puzzler and the music lends itself so well to the atmosphere presented that I would be remiss if I didn’t shout out the sound guys for nailing the audio! 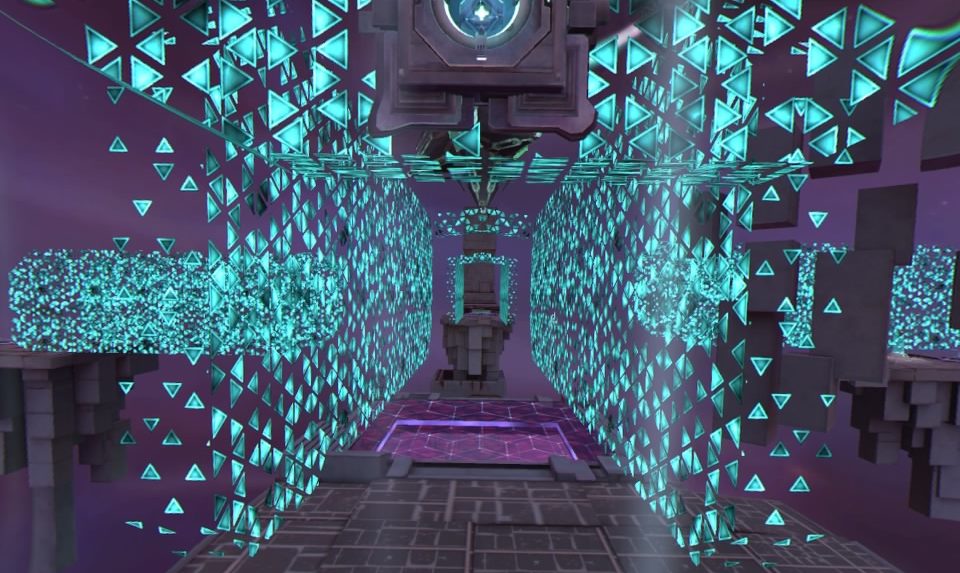 There are some undeniably cool visual moments in here!

Transpose will easily take you  more then a few hours to beat and I don’t think being a smarty pants is going to help you out as much as it would in other puzzlers.  This is a physics-based puzzler that just takes time to figure out how to achieve your goal.  Each new mechanic introduced offers a whole new way to think about the game and when combined with other abilities makes for a mesmerizing experience.  It’s so entertaining to watch your past selves do what you did, while trying to either work in conjunction with them or waiting until they catch up, so you can perform the next task needed to get that cube where it needs to go.  Platforming elements are in full effect with some levels requiring precisely timed teleports or well-timed tosses as you scramble to catch a block you may have thrown a bit to early.  Should you mess up, you can delete old copies and try, try again.  This section of my review is usually about the negative aspects of a game, but other then forced click-turning and some mixed quality visuals, this was an absolute delight to play through.  There are some puzzles that do ramp up the difficulty a fair bit requiring a lot of planning and reacting to get through which may frustrate some, but it’s always doable and the sense of accomplishment when you beat a level that’s been challenging you is totally worth those frustrations. 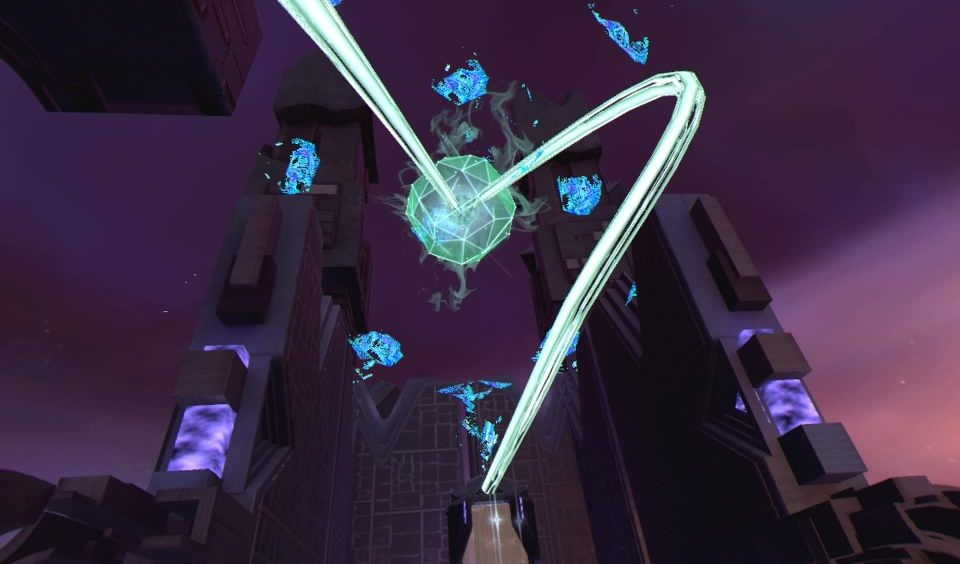 Transpose is a breath of fresh air when it comes to VR puzzlers.  If I were to liken this to anything, I’d say it’s closer to Statik then any other game in the puzzle genre while at the same time having almost nothing in common with that game.  The puzzles are crazy intuitive, the world is immersive, foreboding and beautiful and the mechanics used make great use of VR.  If you are looking for something a little different in VR and love challenging your puzzle solving skills, then Transpose is definitely the game for you!

What would I pay?  20$ is a great price.  Minus a few issues this was a fantastic experience that had so many ‘wow’ moments just because of what the game was asking me to do.  If anything I have said sounds interesting to you then pick this up, you won’t regret it!

Secret Location & Wonacott PR provided The VR Grid with a code for this title and, regardless of this review, we thank them for that!