I’ve played so many iterations of DOOM that I have lost count, but haven’t played since the franchise reset the series for the Xbox 360 and while I did enjoy it, subsequent entries never really interested me…until now.  There is a noticeable lack of “big name” titles available in VR and thankfully Bethesda has taken it upon themselves to bring some of their popular titles to our fancy headsets.  While Skyrim was a direct port of the 6-year-old game, DOOM VFR is not last year’s game VR-ified, but rather a mix on new and old levels mushed into a shorter, intense shooter that will tickle many peoples fancy, but may leave others wondering what all the fuss was about. 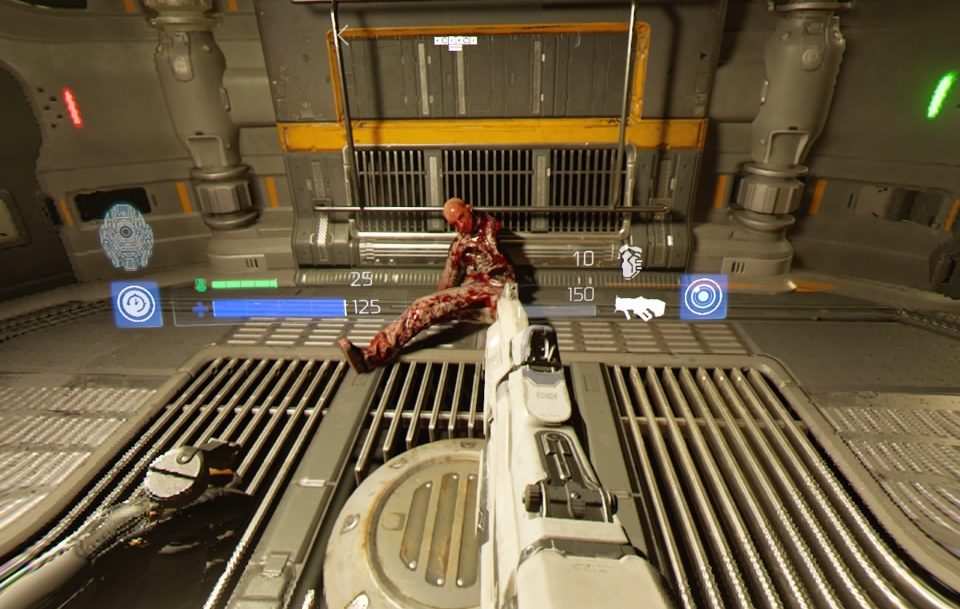 The largest controversy with this title is the control schemes available and while it’s awesome that the devs threw in support for all 3 PSVR control options, not one of them feels entirely comfortable.  Aim and DS4 allow for full locomotion and teleportation while Move only offers the latter.  Aim works really good with a few comfort options allowing you to customize the controls to your liking.  What is odd with the Aim is that the weapons are all single handed, meaning that while you are holding the controller with both hands, in-game only your right (no left-hand support yet) is holding the weapon, while your left hand holds grenades or grenade launchers, which can be fired using one of the buttons and the front of the controller.  The disconnect between your hands in real life compared to in-game is noticeable and a telltale sign that this was a last minute addition.  Still, looking past that misrepresentation of your body, it still plays and works great.

The Move controllers here are a disaster, perhaps the worst I’ve seen in any game to date.  You are limited to teleportation and click-turning, which is par for the course at this point.  What fails is that you CAN ONLY TURN 180 DEGREES!!!  It’s a game breaking choice given the tracking limitations of the PSVR camera and only offers a rage inducing experience.  In a game where enemies swarm from all sides, me having to constantly readjust myself just to turn left or right a few degrees is insane.  To counter this, the PSVR camera position is always at the top of your HUD so you can keep track of your position, which is a wonderful addition that more games should implement, but here it’s just a reminder that no matter how hard you try, you’ll constantly be fighting with tracking issues as you try and keep yourself centered.  Menu navigation and weapon selection is also convoluted and I found myself fumbling through both constantly as both moves are required to navigate the menu…it’s absolutely ridiculous. 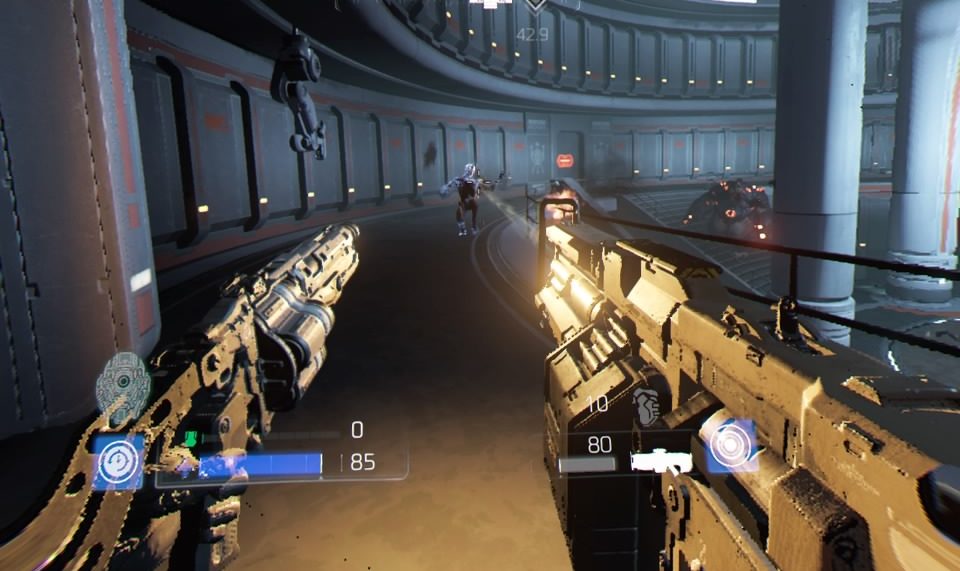 Lastly is the DS4, which plays like any standard shooter with your aiming reticle being attached to your headset movement, meaning you look where you want to shoot and toss grenades plus the easy button layout makes this the most streamlined way to play. This really is the best option and allowed me to keep up with the hectic action without constantly having to remind myself what button did what or being unable to turn properly.  The biggest downside is your arms look like they are strapped to your head at times and should have been locked in position at your sides.  It’s nice to have the variety of choice in all these methods, but each one feels like it needs to be tweaked for VR in some minor, or major way.

I liked the visuals at play here, specifically the sense of scale of some of the demons.  Getting near larger ones is a very impressive sight with some nice details popping upon close inspection.  The stages are a little more generic as the game takes place almost entirely on sterile looking space station (I know it’s Mars).  As this is DOOM, the gore factor is ramped up, bodies explode and pepper the environments making for a more goryous (see what I did there) game, explosions look wonderful and overall, I was pleased with the visuals here. My largest issue is that your hands are mapped to the headset, so no matter where you look, your arms stay in the same position hampering immersion. The audio is exactly what you would expect from an FPS centered around demons.  The music is of the heavier variety and fits the action nicely, effects match the action and the only real complaint here is the deadpan delivery of the protagonist as he talks to himself about the next objective. 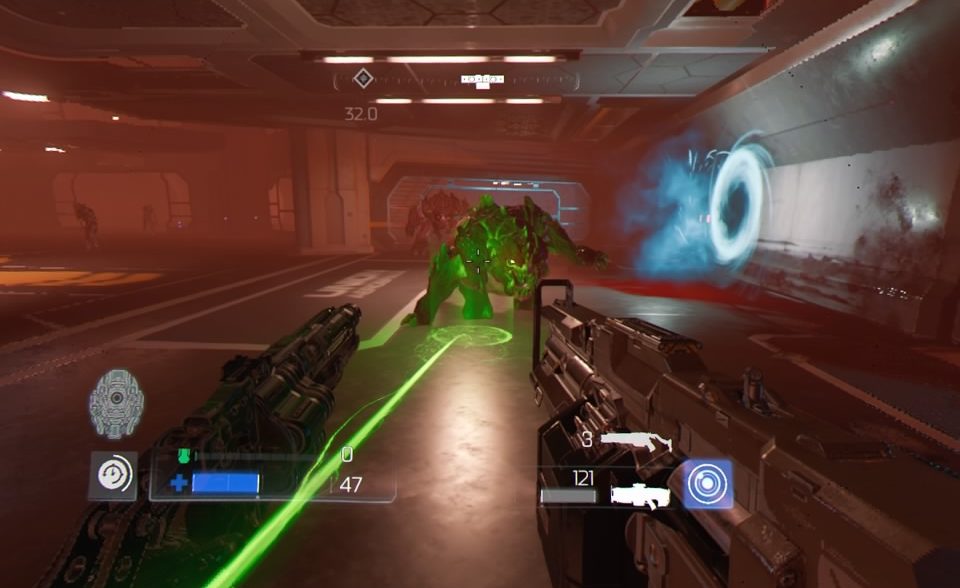 When these guys charge, you better get out of the way!

It’s not just running and gunning, though that is the core of the game for sure.  A few, very simple puzzles mix up the gameplay but mostly involved easily timed button presses or just moving stuff to find an item or clear an objective.  These really aren’t anything more than distractions in between the actiony bits.  Teleportation isn’t just used for movement, but to kill as well.  Stunned enemies are susceptible, for a few seconds, to you teleporting inside them, blowing them apart and is a fun little gameplay mix-up that I enjoyed every time I did it.

Campaign mode is the only mode available and will take most people anywhere from 2 to 4 hours (or like 10 hours with the Move controllers) and I was definitely on the 4-hour side of things as I found I just wasn’t good at DOOM.  Enemies flank and hunt you down, rarely letting you catch your breath and requiring you to be on the move always.  It’s a frenetic game, especially on the harder difficulties, and will keep you on your toes throughout its brief playthrough.  The only reason to revisit the game is to try your hand at a harder difficulty so those expecting any kind of extended play from this will be disappointed. 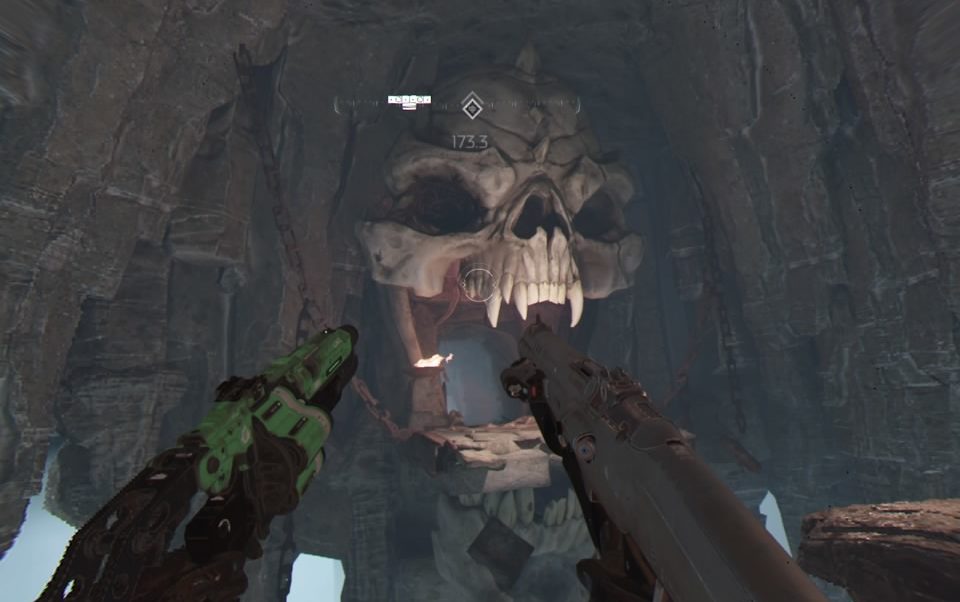 Hell…it’s a fun place t visit, but I wouldn’t want to live there

DOOM VFR is ultimately a very simple, relatively short VR shooter that never quite felt right to me.  The intense pace was great but the disconnect between myself real world self and in-game representation plagued my whole playthrough.  While not the most immersive, DS4 was ultimately my control type of choice as the Aim had me struggling to remember buttons and the Moves were just deplorable.   DOOM VFR is high paced shooter with an emphasis on chaotic fun in the singular, short campaign mode (with a couple bonus missions) and if your looking for some insane action, there isn’t anything else quite like available in VR.

What would I pay?  I think some will be offended by the lack of content offered in Doom VFR and obviously the controls need to be reworked.  Still, when the action gets insane and you are literally wading through demon a demon, the fun is undeniably awesome.  I have no problem paying the $30 asking price.

Bethesda Softworks provided The VR Grid with a review code and, regardless of this review, we thank them for that!