The behemoth franchise that is the Walking Dead has creeped its way into VR with Saints and Sinners.  Taking place in New Orleans, long after the initial zombie outbreak, you play as ‘The Tourist’, a new arrival to the city who is soon caught up in the struggles of its inhabitants.  Warring factions and a never-ending horde of the undead keep you on your toes as you explore areas of this sunken city in search of much needed supplies to aid you in your efforts. 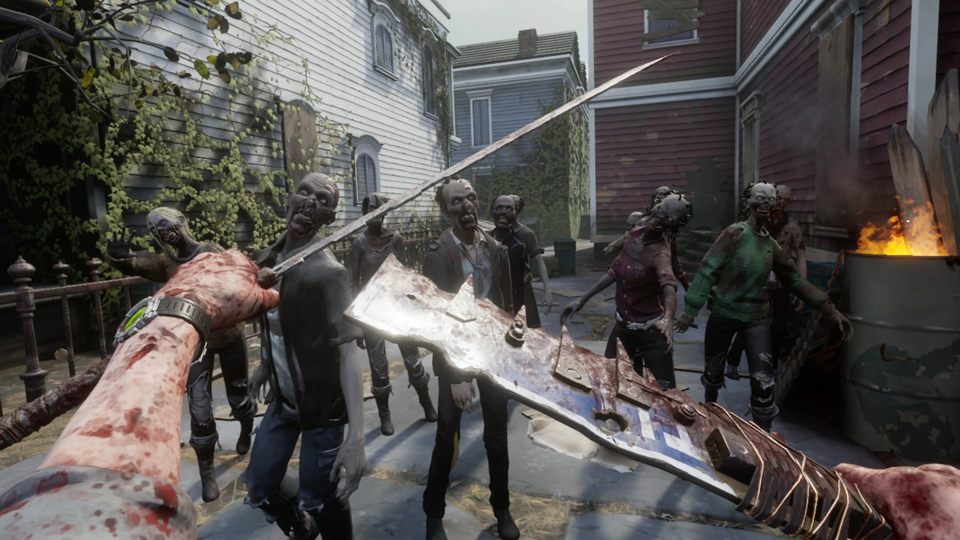 You NEVER want to face this many zombies at one time.

With 2 tracked motion controllers, you navigate the environments in typical VR first person action with comfort options for blinders and click-turning should you need them.  As an army of one, you have a very handy backpack which can carry a fair bit of stuff though is never enough as you constantly scrounge for resources.   Your melee weapon is stored at your left hip, pistols on your right with your larger weapons being strapped over your right shoulder.   You can access your backpack by grabbing over your left shoulder with a flashlight, journal and ammo all placed on your chest area.  It’s a great system that you need to get used to as you’ll often find yourself in situations where you’ll need to react fast; whether its reaching for a weapon, food, bandages or trying to quickly reload a gun.  Stamina is pivotal in survival as over exertion can cause a host of issues.  Anything requiring more effort then walking reduces your stamina bar so using back to back to melee attacks against a horde of zombies is incredibly risky because if your stamina drops too low, your in-game arms won’t be able to match your real world actions so while you may be stabbing a knife into a zombie’s head as hard as you can, in game your arms just don’t have the energy to do so, most likely resulting in death.  Your stamina can be replenished by resting or consuming food and beverages which can be found or created from recipes hidden throughout the city.  The second factor you need to keep an eye on is your health which is directly associated with any damage take and even after a few upgrades, it’s in your best interest to not take any hits at all as you can’t take a lot of damage, though this is easy to replenish assuming you have some bandages to wrap your arm up with or some medicine in your inventory.  A crafting and upgrade system is setup at your home base at 3 different stations allowing to craft food, bandages, weapons and permanent upgrades such as expanding your backpack or making you a little more silent when you run. 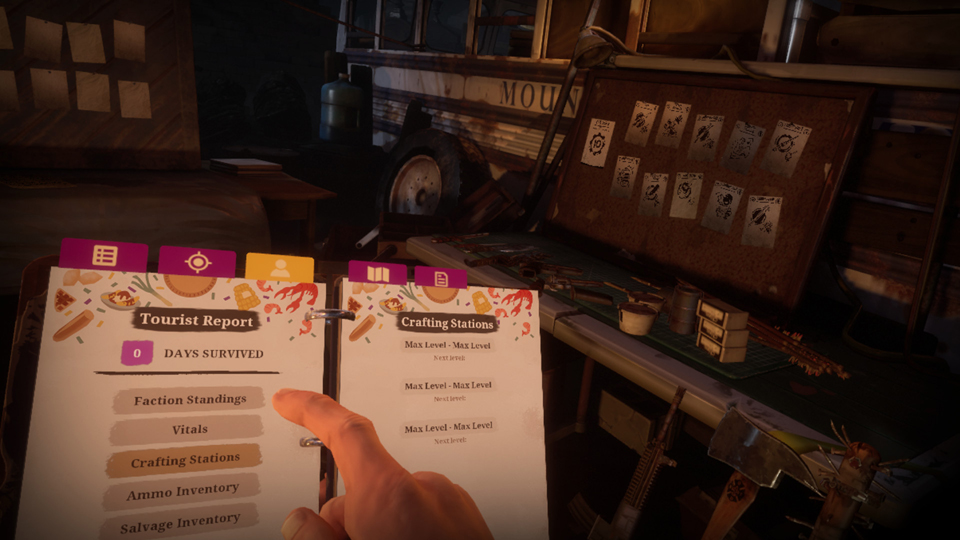 There is a wonderful crafting system in here that’s worth exploring!

The campaign is divided into day and night cycles though I’m unclear if that day count has any real bearing on the story save for the fact that you can’t travel at night due to the zombie hordes that are in the streets thanks to a tolling bell at the cities center that rouses the horde.  When you venture to any area a watch on your wrist begins to countdown to said bell which by math was roughly 20 minutes or so.  That pressure forces you to move through each stage at a constant pace because if you don’t make it back to your little raft before the horde arrives, you are probably going to die as the number of zombies in the area increases dramatically.  There is a main campaign to follow as well as a side story which offers a lot of loot but contains much more risk as you’ll often have to infiltrate human bases and those people tend to shoot first and ask questions later.  The campaign should take anyone at least 10 hours to get through though I was closer to the 15-hour mark thanks to overly cautious gameplay and a few deaths.  Should you die you can choose to restart from your last few auto saves or respawn where you left off, minus any loot you had and to get your stuff back, you must travel back to the spot where fell to nab your backpack.  Should you die while trying to retrieve your backpack, all your stuff will be lost, and you will be forced to reload an old save.  Once you beat the game, you can continue to play minus the story, looting and killing to your hearts delight revisiting all the areas from the campaign. 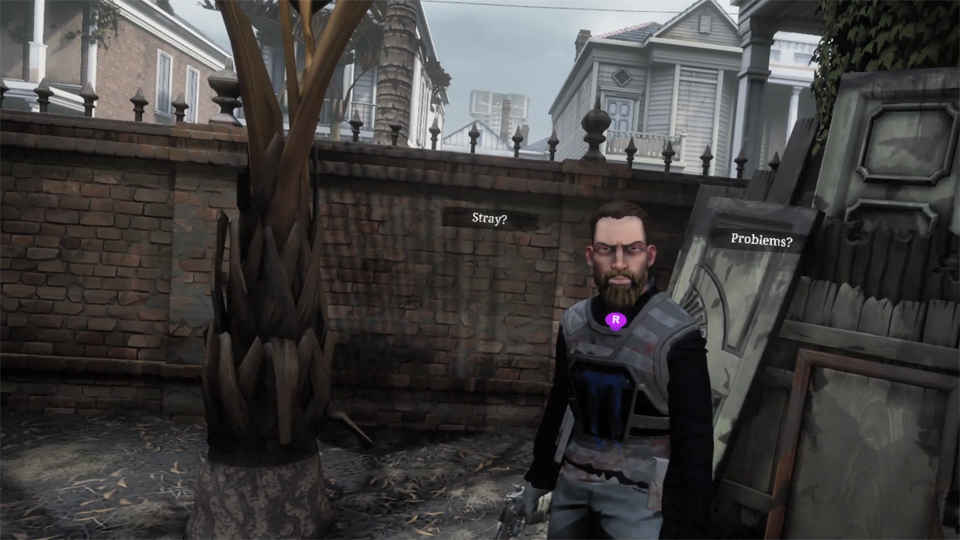 Quests offer choices that allow you to be the hero or the villain.

Saints and Sinners, in my opinion, borrows quite liberally from the Tell-Tale Walking Dead series of games though removes the cell shading in favor of more proper textures.  The overall look is cartoonish but still has a realistic polish that makes it one the prettier games in the headset.  Draw distance seems infinite so even though each locale you explore is rather small, at most a few blocks, it still looks and feels like you are in a much larger area.  Both New Orleans and the apocalypse allow for some realistic and clever ways too block your path as most areas are cut-off by flooding or car walls designed to keep the dead at bay.  Light effects are great though subdued as the game, whether it’s day or night, is dark or very grey adding to the sense of hopelessness that pervades this franchise.  Stages are littered with detail and while cartoonish, the character models look great, but the star of the show is the zombies and combat.  The undead lumber around in realistic fashion and when they spot you, attempt to chase you down.  As the only way to kill a zombie is to hit its brain, thanks to impressive physics in these moments, Saints and Sinners offers up the MOST visceral combat I have ever experienced in a game.  It reminds me a ton like The Last of Us as I creeped up behind a zombie and stabbed my knife into its head followed by me using my free hand to push the zombies head off my shiv to unstick it.   Even when you splatter heads with guns, whether it the living or the dead, the combat is intense and feels very personal putting you in the game like very few others.  Zombies do come in more then just 1 easy to kill form with some having amour that prevents typical head stabs forcing you to adjust just how you get your knife to reach their brains.

The music is dreary and dark though picks up whenever an enemy spots you and thanks to some amazing 3D audio, it’s very easy to tell when someone or something is nearby.  You might only hear the scuffling of feet but that is enough to let you know to be ready for a zombie to come from around any corner.  Every character is fully voiced, and I never had any issues with the performances as they all do a fantastic job of delivering their lines in realistic fashion, swears and all.  Even notes found can be read to you aloud which was another nice touch as reading is not one of my favorite things to do in a headset. 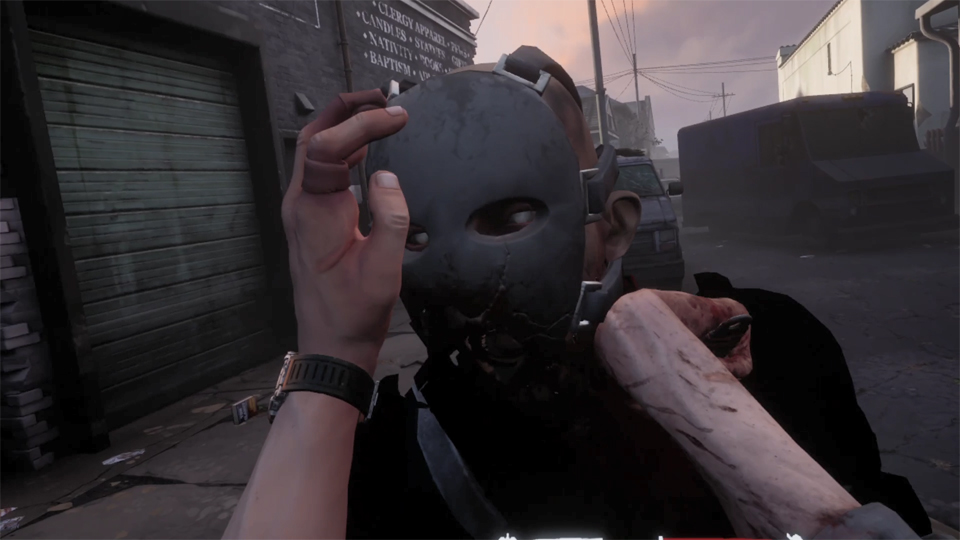 Armored foes a little trickier to put down.

I did run into a few, minor issues in my playtime but trust me when I say they are minor. The 1st is that this game is designed to be played seated which is made apparent by trying to duck and taking the whole world with you as the only way to crouch is with the press of a button.  My second issue would be how the undead randomly spawn, which for the most part is fine enough as just like in the TV show or comics; sometimes a zombie was just hiding somewhere you didn’t see.  However, on more then a few occasions they would spawn in silly spots like in a room in a house that is only accessible from one very hard to get to entrance AFTER I was just in that room and cleared it of any dead.  Even on city streets as you clear a path to your goal, just turning around might have a zombie magically show up mere seconds after you just left that spot which did hamper immersion a bit.  I get not wanting the player to ever be able to rest and keep the threat level up at all times, but I can’t help but feel like this could be refined a little more.  The game also boasts a few optional quests from people met throughout the game, but these are actually quite rare, and I wouldn’t have minded seeing more of these sprinkled in throughout the campaign, if not just to give me something a little extra to do.  The crafting and upgrade system is completely optional and should you want, you could beat the game with the bare minimum of supplies but it is definitely worth unlocking those later tiers as some of the items you can make allow for a much easier and more fun time.  The sense of physicality is also here and while it’s not as exact as Boneworks, it’s still quite high as you can grab and touch almost anything in the environment including walls and barriers or climb ladders and scale small walls, once again giving the user a proper in-game presence.  Every item in Saints and Sinners breaks down with use be it a simple knife to a shotgun so it’s best to craft a few of these weapons and have them on you as there is nothing worse in this game then having a gun suddenly break in the middle of a battle because you weren’t paying attention to how much it has degraded with use which is indicated by holding the weapon close to your face and when they are about to break, they are highlighted with a red outline.  I had a few issues, but overall Saints and Sinners is a game that delivers top quality presentation, gameplay and a sense of presence in VR that we need more of. 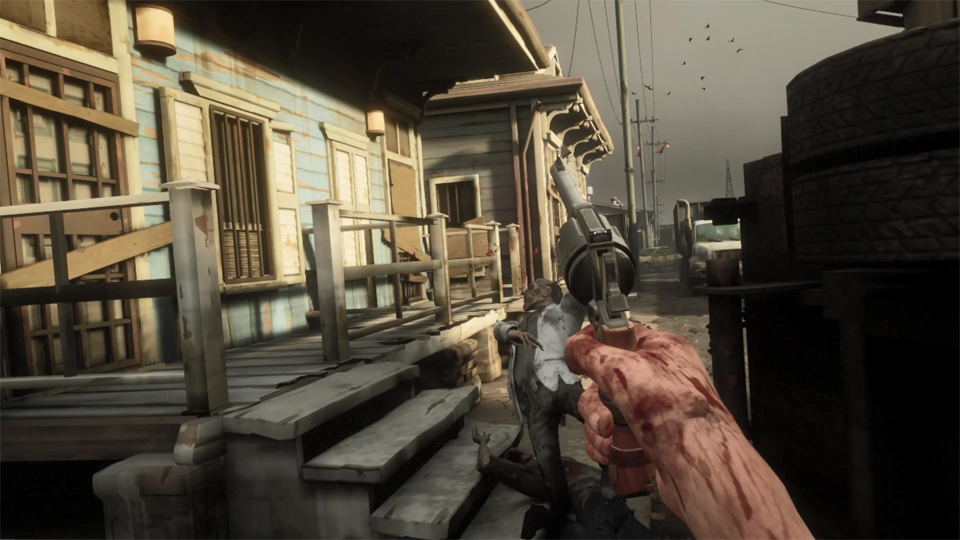 The Walking Dead’s 1st VR title is an impressive one and easily one of the most addictive and terrifying experiences I have ever played.   It’s a mixture of Resident Evil 7, The Persistence and The Last of Us with the game offering up an intensity level that makes this both stressful and fun.  I truly felt like I was surviving in the Zombie apocalypse taking out zombie after zombie like I was a pro.  That said, as the campaign’s difficulty ramped up, I found myself being more stealthy, trying to avoid encounters whenever I could knowing full well that every bullet fired and brain bashed in would slowly break weapons that I could need for a larger encounter just around the next corner.  If you love killing zombies, survival mechanics and aren’t afraid of some intense gore and adult language then Saints and Sinners is a must own for anyone with a headset.

What would I pay? This is $40 US and that’s a great price.  The campaign has some legs, the action is super violent, the performances are top notch and the suspense never lets up from the beginning of the game all the way to the conclusion.  The added bonus of being able to keep playing after you have beaten the game is just the icing on the cake for what is arguably one the best VR games ever.