As the PlayStation VR headset enters its twilight years and game development shifting towards titles that can run on the Quest headsets, bigger games that can utilize the power of our console seem to be a thing of the past as we only seem to get 1 or 2 standout titles every few months now.  Fracked looks to be one of those exceptional titles as you are thrown into the shoes (ski boots?) of a hapless hero who must fight back a horde of inter-dimensional beings who have started their invasion of Earth at a fracking operation on a remote mountain. 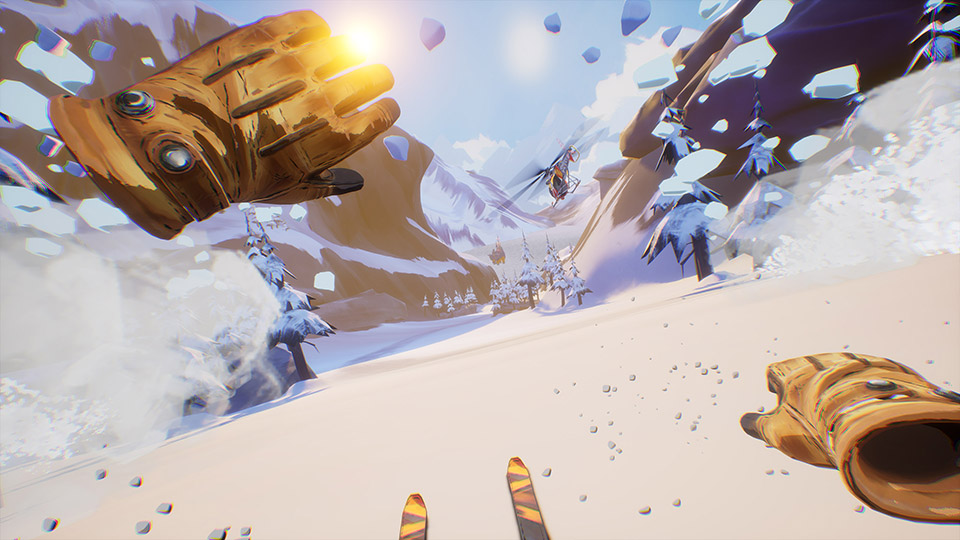 It all starts with a scenic trip down a mountain.

Fracked has clearly been designed with the Moves in mind as one hand is devoted to movement while the other is your gun hand.  When walking, simply hold the Move button down and tilt the controller in the direction you want to go with a double tap of the move button allowing you to sprint.  Turning is handled by button presses on your shooting hand with options for smooth and click-turning available as well blinders for those that need them.  Once the fighting starts, it’ll be up to you to take cover which is handled in a unique way as, to duck or peer around corners, you move into position and grab the environment with your off-hand, anchoring yourself in that spot, but allowing you to drag yourself within arms length of what you are grabbing, making for a very natural way to shoot, take cover and shoot some more.  When you want or need to reload, you’ll have to expel your clip and an icon appears where the ammo should be placed.  Bringing your hand up to that icon and grabbing it will shove the next clip into your weapon, and a quick cocking of the gun or lever pull will have the gun ready for more shooting action.  If you aren’t walking, you’re skiing which is handled by simple head steering controls, freeing up your hands to shoot the bad guys as you careen down the mountain.   You will have to also climb around the environment, having to scale walls to get across gaps, ascend ladders and some more extreme sections that hearken back to some of the crazier moments seen in the Uncharted Series, with ziplines scattered throughout the campaign allowing for some quick traversal to lower levels and surprise attacks.   The campaign is comprised of 8 stages, each playable on easy or medium with hard being locked until you beat the game and I recommend playing on medium 1st as encounters are challenging, but not too bad with easy being to easy thanks to a laser sight. Playing on hard only gives you one life so if you die, you need to restart the mission.  Depending upon how you play, the campaign probably won’t take more than 3 to 4 hours to get through but for those completionists out there, coins are hidden throughout the game that will require you to explore every nook and cranny to find them, extending game time. 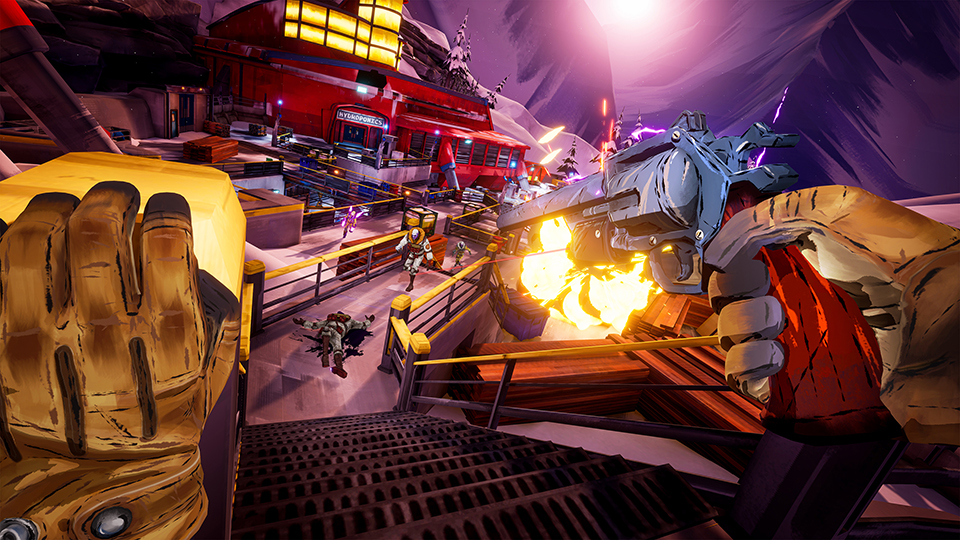 I’ve said it many times before, but some of the best-looking VR games are those that go for a more cartoonish look with the Fracked devs clearly reading my mind as this game looks very similar to Borderlands ‘not-quite’ cell-shaded art style.  Everything in Fracked looks like it was inspired and based upon real-world objects and locations, but with a comic-book overlay that just pops in headset.  Draw distance seems endless and while those distant objects can look a little blobbish thanks to the art style and headset resolution, the fact that you can as far as you can makes this one of the more impressive PSVR games I have seen in awhile.  The opening stage takes you on a ski trip down a mountain during an avalanche, followed by an action-packed tour of a nearby mining operation, a climb and ski to a science facility, a battle above a rig and so many more interesting locations that really make this feel like an action film as no 2 set pieces are quite alike.  The enemy zombie/drones you face only come in a few forms from gun-toting peons in winter gear, weird looking gem encrusted dudes that try to get close to you before they explode, larger monstrosities armed with rocket launchers and 1 or 2 more, leaving the total enemy count quite small, but I never got tired of seeing the purple blood explode out of their bodies after a successful hit.  You’ll acquire a few guns in the game from a stock pistol that never runs out of ammo and a machine gun with some temporary weapons being found in the game that once picked up must be expended as you can’t drop them or store them.  These include a shotgun, Magnum and grenade launcher and whenever you see them lying around, expect a big fight up ahead.  When you look at whichever weapon is in a hand, you can see a sort-of x-ray vision of the gun and how many remaining shots you have left which is handy for the temp weapons which don’t have counters on them.  There is a verticality and sense of freedom in the level design that offers multiple paths you can choose to defend and attack from with the enemies doing the same so you always have to be aware of where they may be coming as they can sneak up on you.  Lastly would be the lack of dynamic lighting which honestly doesn’t hurt the game much with the levels often incorporating shadows that match the angle of the sun giving a sense of proper lighting.  Nearby explosions may cause your vision to change color for a second, once again giving the appearance of some dynamic lighting but given the art style chosen, those lacking effects never really hurt what is otherwise a great looking game. 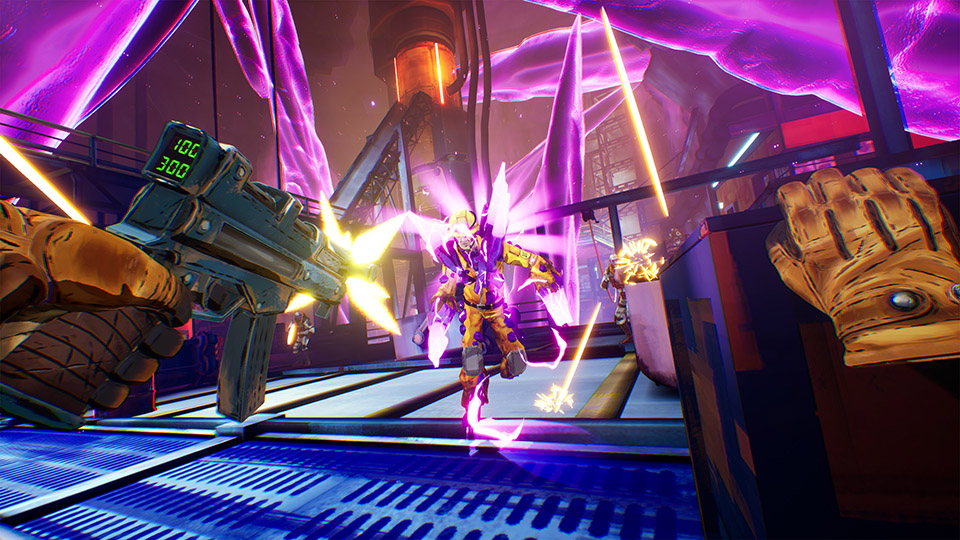 These guys can sneak up on you quick!

Audio design is on point with this playing very much like an action-movie type game as you, the player, drops the occasional line of dialogue in between encounters or when he chat’s it up with Rosalez, your helicopter flying partner, who shows up more than a few times to save your butt.  3D audio isn’t the best with it sounding a little more like left or right channels only which gets the job done, but it can be hard to narrow down where enemies may be by their grunts and screams, especially if they are above or below you.  A rather generic, high-octane rock soundtrack accompanies the game and kicks in loudly when in a firefight with some more serene tunes playing when you are on the slopes, giving the overall impression that you are in an action movie and not just a game.

Fracked feels a lot like Blood & Truth, only with A LOT more freedom of movement and a little more B-Movie narration which should get a lot of people excited.  The cover mechanics work great, and the single-handed gunplay feels awesome.  The climbing sections are a nice break from the shooting and the skiing stuff was also a ton of ‘James Bond(esque) fun.  I honestly didn’t run into many issues at all save for some minor pop-in and the occasional enemy that would appear out of nowhere, sometimes right in front of me.  That does lead me to me one notable gripe which is that deaths in Fracked can sometimes feel cheap thanks to those surprise enemies and that there are explosive containers EVERYWHERE which can be used to your advantage, but on more than a few occasions, the enemy shot ones I was standing close too, causing some deaths that were hard to avoid.  The checkpoint system is mostly fair, and I typically started very close to where I died, but for those that are playing on hard, those unavoidable deaths could really hamper the fun and add some frustration.  In the grand scheme of things though, these gripes are near inconsequential to just how much fun is packed in here.  It may seem a little short, but it really is non-stop action from beginning to end and was one of the more entertaining campaigns I have played through in VR in recent memory. 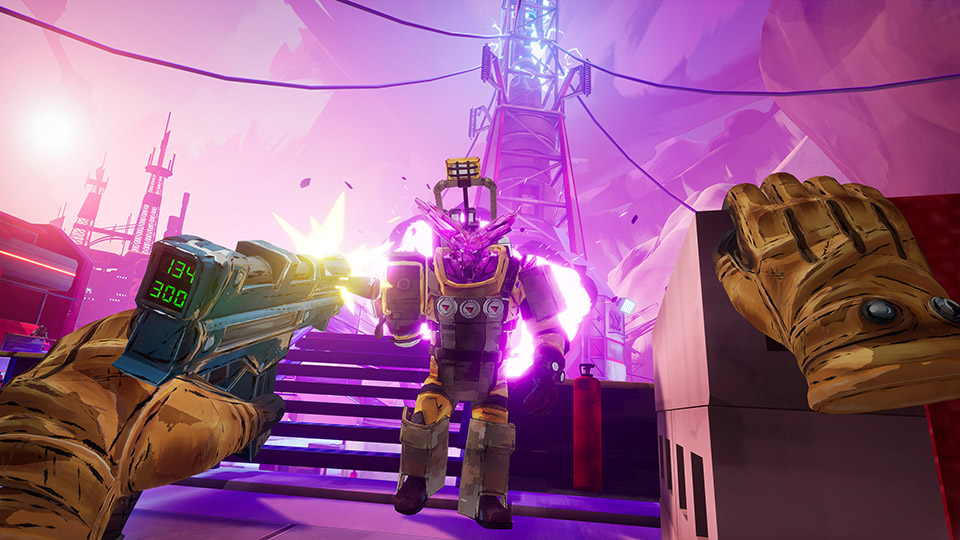 You don’t want to get this close to these guys.

Fracked is an action-packed adventure that doesn’t let up on the thrills from the moment it begins.  The variety in the game mechanics combined with the slick presentation makes this a must play PSVR exclusive and shows their still plenty of life left in the aging headset.

What would I pay?  This is $30 which does seem a tad high given the rather brief campaign though I can’t deny the fun I had in my time with the game.  It’s just too bad there isn’t more reason to replay the campaign besides changing difficulty settings and finding coins.

nDreams provided The VR Grid with a press code for this title and, regardless of this review, we thank them for that!