When you think stealth in gaming, you’re 1st thought is kayaks right? No? Well, the fine folks at nDreams thought that and now we have a title that hearkens back to 90’s style stealth games, but with a quirky VR twist that sounds like something out of a right-to-video film.  Grab your oar and let’s see just how well this odd combo translates in Virtual Reality. 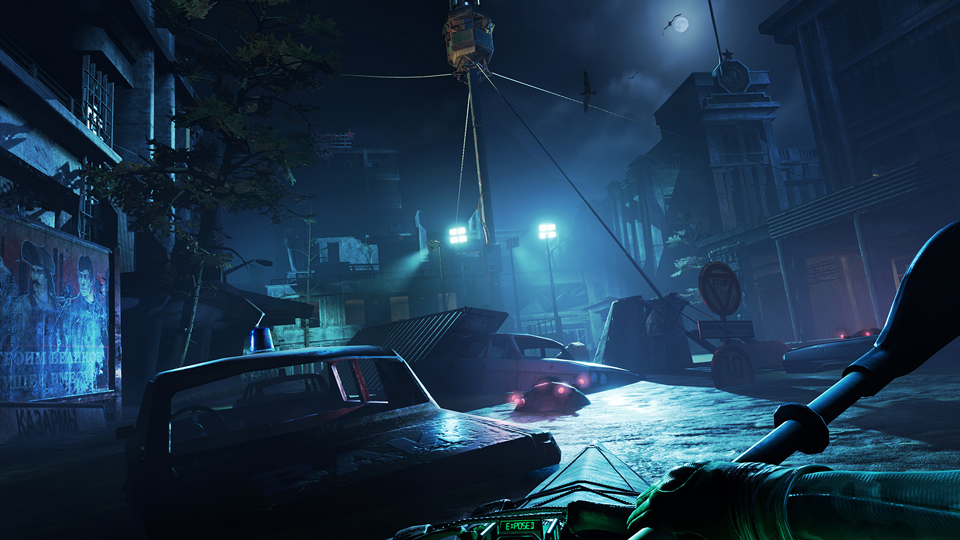 Slow and steady in this one folks

This is designed for comfort in mind as this is a sit-down experience with turning being handled by paddling your little watercraft, though there is a click-turn option for those that need it. Whether you’re a kayaking enthusiast or not, it’s the simplest thing in the world as to move forward you just dip you paddle in left and right to move in any direction you choose. Pressing the ‘A’ button while paddling lets you turn much faster with all the other interactions relegated to grabbing items on or near your person. Initially armed with a silenced pistol, sniper rifle, ammo and sound grenades, you have plenty of options to get you through each stage with more being added later in the story. The game allows you to finish the stage however you choose be it sneakily or with guns a-blazing but the game clearly emphasizes stealth for the campaign as your ranking at the end of each stage relies heavily on your sneaking skills. Stealth effectively involves not finding yourself in enemy spotlights whether it’s a soldier’s flashlight, boat lights or mounted spotlights. Soldiers and boats will patrol, and spotlights may move or can be shut off by destroying nearby power sources. Should you be seen, you’ll have a few slow-mo seconds to handle the situation with gunfire, but it’s best to survey your surroundings and note enemy locations and possible distractions like fire extinguishers or radios which, when shot, will grab a guards attention as will an errant toss of 1 of your clips should no other options be available. With a special pair of binoculars, you can mark all those points of interests which will now have them highlighted in your standard vision. The seven-stage campaign will take somewhere in the 3 to 4-hour mark to get through with some fun and challenging mix-ups in gameplay along the way like losing all your items or evading snipers.

Beyond the campaign are challenge modes that are attached to each stage beaten so as you complete the campaign, you can revisit any stage with attached leaderboards and cheats which are also unlocked by finding hidden objects throughout the campaign.  Some smaller side missions are also available like racing, or assassination missions which all involve being efficient as possible climb those leader boards.  The challenge mode also let’s you play any stage with any items you have unlocked as well as cheats like big head mode or****** with many more unlocked by finding hidden items throughout the campaign.  Every stage in this game has online leaderboards as well so for those glory chasers out there, you have plenty of reason to keep playing this long after your 1st playthrough. 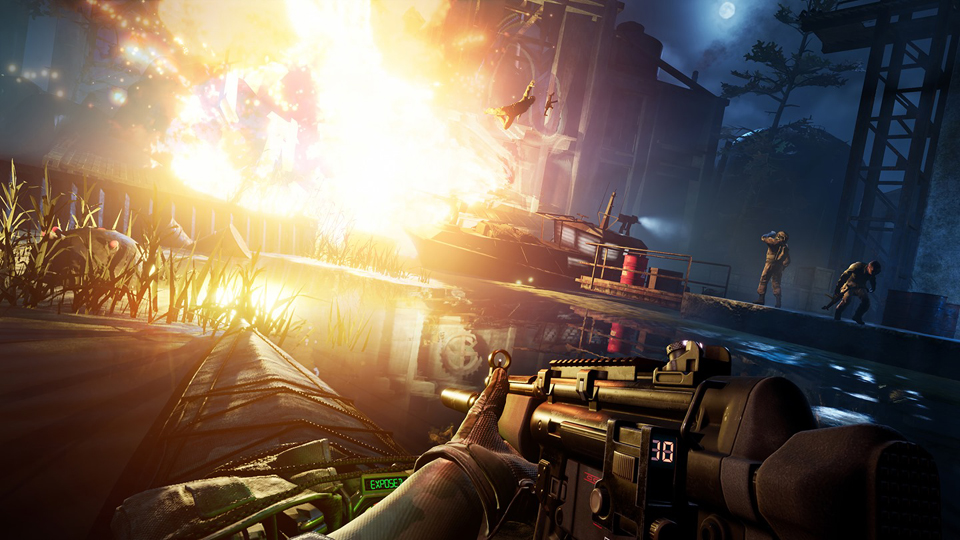 Phantoms presentation lies somewhere between good and great with some awesome set pieces that are held back by the restrictive nature of the movement system. You are venturing through the ruins of a Russian facility, thought destroyed, after some terroristic shenanigans are traced back to that location. Thanks to recent flooding you are able to access the facility via kayak and must venture deeper and deeper into it, navigating through smaller canals to larger bays.  There are some truly stunning and grand set pieces here from huge radar dished and massive factories in the distance but the up close and personal is where this game shines.  Watching the water ripple as you dip your oar in and out of the water while the tip of your kayak breaks the murky surface is a joy to behold.   You’ll be hiding in reeds (a lot) and they react accordingly as you creep through them, made all the better by scouts shining lights on your little hiding spot, casting excellent looking shadows and highlighting the quality lighting effects at play.  As this is a stealth game, almost the entirety of Phantom take place at night bathing everything around you in darkness.  The game is not pitch black however and you might have suspend disbelief at times as their are many instances where the enemy should see you easily, but unless you are in a spotlight, you are basically safe to paddle wherever.  You’ll find yourself creeping under docks, paddling through flooded tunnels with half submerged traffic all around you and a host more settings that are a treat to behold, which is good as you’ll spend the latter half of the game retreading your steps as you try and escape the base. 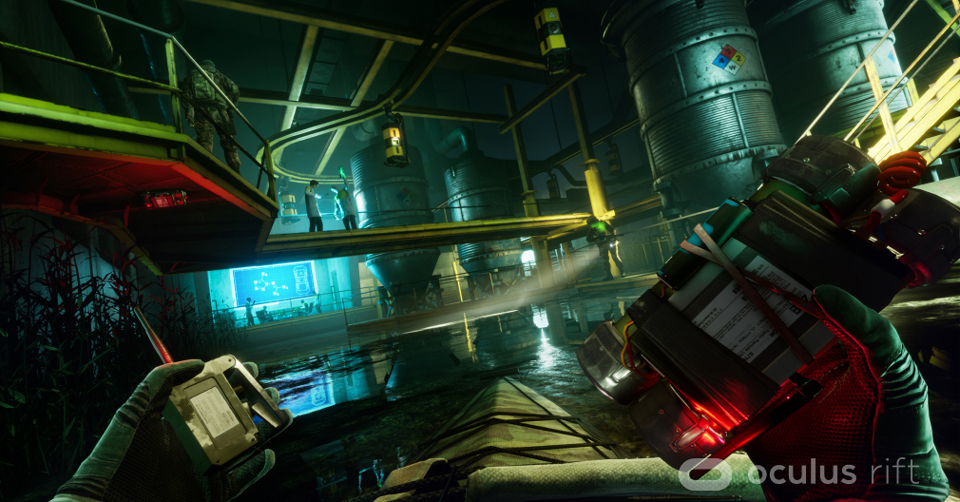 The only solution is more explosives!

Sound design in this is solid from almost every aspect I can think off.  The music, when it kicks in, is intense and adds a ton of weight to whatever situation you are in.  You’ll be in contact with your superiors who elaborate and break down the events in the story, supplying background info on your missions and the players in the game.  The voice acting is top quality and thankfully, for us English speaking folks, everyone in hear speaks English, with or without the appropriate accent, and does their job wonderfully.  Creeping up on 2 unsuspecting guards may reveal additional information about the facility but more often then not just provide some light comedic moments as the 2 soldiers talk about whatever.  The 3D audio is on point making every oar dip, gun shot and enemy chatter sound as if they should in real life and in a stealth game like this, that is a fantastic thing as the only signal someone might be nearby is the sounds of their footsteps or a light cough.

I honestly wasn’t sure if this combination of stealth and kayaking would work and I’m happy to say that it works way better then it should, thanks in large part to being in VR.  The old-school stealth mechanics immediately reminded me Metal Gear games I honestly couldn’t help but think of this as a sort of kayaking side-mission in that series…heck, this even has David Hayter as one of the characters in here.  It’s not perfect by any stretch and I did run into some collision issues with my kayak either getting stuck on hard edges or disappearing into geometry but never once was I forced to quick and a few quick correctional paddles later and I was back on track.  When enemies spot you, the world slows down giving you a few precious seconds to take them out or escape with the latter sometimes being incredibly frustrating as on multiple occasions, when I did move out of their sight by placing a wall or structure between myself and them, they still shot me through that geometry causing a few unfair deaths.  The final few stages do retread areas already visited with some mix-ups in encounters and tools at your disposal add variations on the gameplay so it doesn’t feel all that samey, but that sense of Déjà vu is there.  Even with some of those glaring faults, I really enjoyed my time in the game.  It’s immersive and fun and more importantly, the stealth works as it’s supposed to almost all the time so whenever I failed or was spotted, it felt like I screwed up and because of some poor game mechanics. 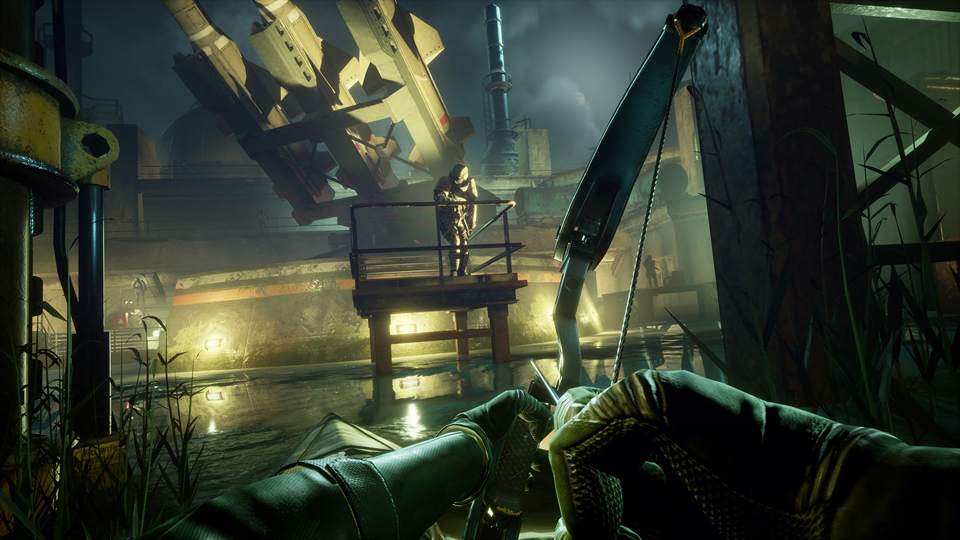 Get a high enough rank and you too can use a compound bow!

Phantom: Covert Ops at times eschews AAA presentation and while it’s not as large as those games typically are, from beginning to end I was entertained.  The campaign is perfectly paced and doesn’t wear out its welcome and I am very happy with the length of the campaign.  There is a ton of reason to replay this whether you just want to mix up the difficulty or tackle and of the *operation* missions with the overall package here bustling with content.  If you have ever loved a stealth game in the past, in or out of VR, then you owe it to yourself to play this, it’s great!

What would I pay?  This is a modest $30 US and totally worth it.  The campaign is both confined and epic and going back through the story as a stealthy espionage agent or a full-on Russian terrorist assassin along with all those bonus missions gives this game a ton of value.

nDreams provided The VR GRid with a press code for this title and, regardless of this review, we thank them or that!