You’ve heard it before; it’s the future, the world is wasteland and the remaining survivors have fled to the last remaining “safe” place on Earth, under the ocean.  You play as Sarah, an employee for A.Q.U.A, and you are tasked with driving your under-water pod around while performing menial tasks for your boss.  It doesn’t take too long before you stumble across something unusual and begin to uncover the mysteries surrounding you. 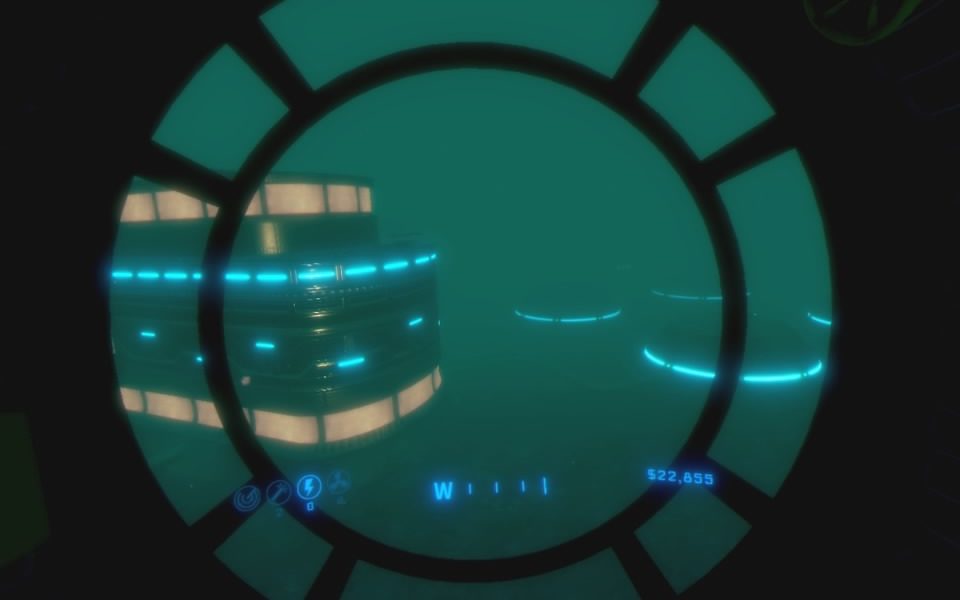 A.Q.U.A base is in stark contrast compared to the rest of the game

Utilizing only the DS4, you move your pod with a six-axis control scheme (minus the ability to adjust your keel) and along with that are a host of items and abilities.  You get a much-needed Sonar as well as flares, a boost, power and another unique ability that I won’t spoil.  Minus the boost (which I never used, unless by accident) you’ll need these abilities to solve the puzzles and tasks that are placed before you.  After the first job is completed, you are free to explore and find the source of some weird signals plaguing your home base.  Your vehicle has unlimited power, as long as you are within certain energy field.  Leave the field and you are now on battery power, limiting just how far you can actually explore.  Thankfully, running out of juice just means you restart back at the base so it’s not to punishing of system.

The puzzle mechanics here are simple with you mostly just interacting with a highlighted object and activating it according to the games design.  Turn a valve, pick up a part for later use and so on and so forth.  It’s not overly complicated save for the ones unnamed ability I mentioned earlier.  It’s probably the highlight of the puzzle solving and afford a unique twist on how you circumvent many challenges.

Lastly, you can pick up scrap which immediately turned into cold hard cash.  This is spent at your base to replenish your used supplies and add a few upgrades.  This is probably the most useless feature of the game as I’m pretty sure the supplies you get at the beginning are enough to beat the camapign.  Still, for those that constantly use the wrong item, like I did, then this is here to save the day.

It’s clear that you are at the bottom of the ocean.  Everything is murky, fish and jellyfish swim about the rocky formations and sandy floor.  It’s dark, stark and  barren, like it should be and I thought the visuals captured that feeling of at the sea floor quite well, just don’t look to close at anything.  The A.Q.U.A base has some bright lights and is quite large, standing out from surrounding area.  Explore a bit and you’ll stumble across some other cooler features like an old galley ship, a submarine and a few more plot related objects that I won’t spoil here.  Overall the visuals here do the job nicely and I felt like I was navigating an unexplored section of the ocean. 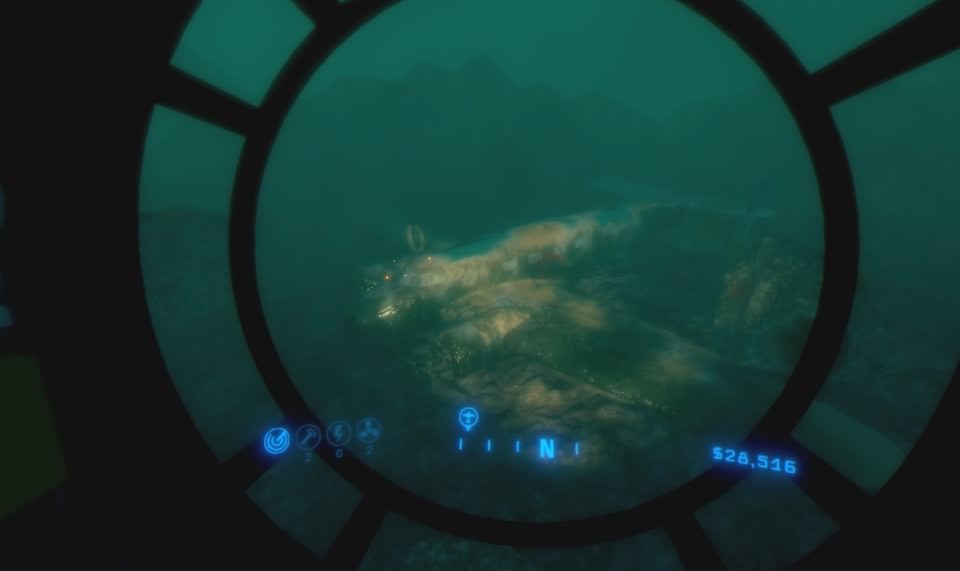 This plane offers up some cool revelations

The storyline is told almost exclusively though conversations between you, your boss and another character you find pretty quick. The voice acting here is phenomenal and right at the onset, when Sarah’s pod is descending, you know right away she is voiced by a very competent actress.  She sounds feels authentic which is equally impressive given the games short length, making ever time she talks matter.  The ambience of the ocean, and some dynamic, positional audio make this one of the more impressive aspects of the game.

It is worth mentioning that Zoxide games is 1 guy, and that guy, Nick Petitt, made the game he wanted.  While it’s touted as an open world experience, that world is pretty small.  That’s not a bad thing, as it allows you to focus on the tasks and missions at hand, but those who are looking for a never-ending ocean to explore will be left wanting as any areas outside of the main game setting are devoid of any features, and can’ really be explored anyways because of your pod’s limited battery life.

Neptune Flux took me just shy of 2 hours to beat, which is fine given the price point.  The game just kind of throws you to the wolves at the beginning and explains absolutely nothing to you.  I struggled on the first mission just because I didn’t know what the game was asking of me and what my capabilities were.  Trial and error (and a hint or 2 from Sarah) got me passed the first objective and after that it was pretty much smooth sailing.  A few puzzles take a little thought, but none are overly complex.  The emphasis is on exploration and that’s not a bad thing.  Searching for your next target, only to stumble across an old plane or ship immediately piques your curiosity and demands that you check it out, hoping for the next clue to uncovering the secrets the game throws at you.

I had a few issues, my biggest one being that to interact with anything, you had to be a certain distance away from said object.  To close or to far and even though you were looking directly at it, you can’t activate it.  That’s not the biggest deal except when coupled with the “high” center point of you ship, which forced me to look a little down at everything I wanted to play with.  This annoyed me throughout almost all my playthrough, though it wasn’t really a factor unless I as collecting scrap while on precious battery power.  Items and abilities are mostly not needed, the “open world” isn’t that large, and while there is still a fair bit to explore, it’s a little laughable how close each discovery is to the last, especially when there is a giant new base nearby, seemingly unaware of the area it’s been built in. 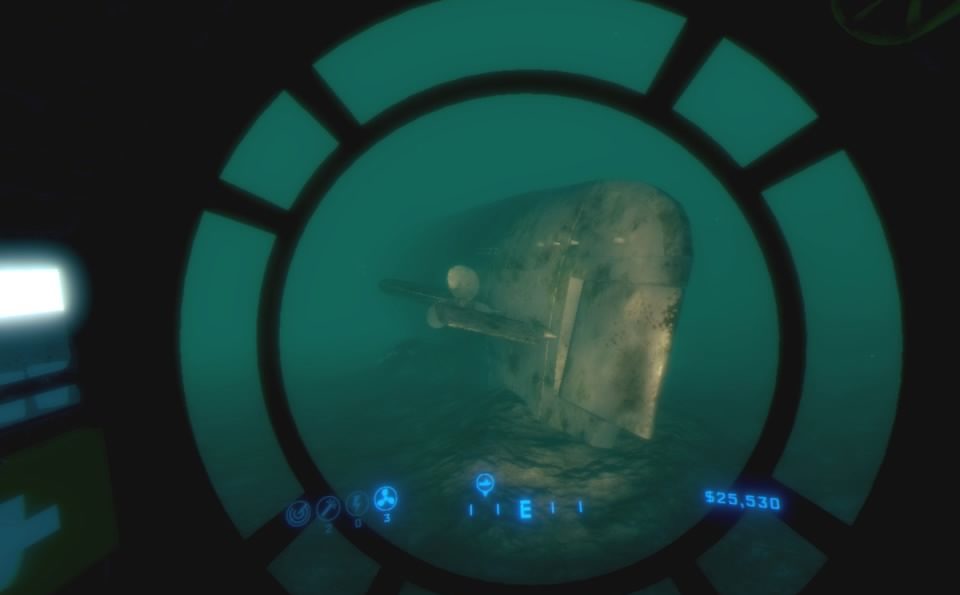 Everything you stumble across is eerie and forboding.

Shortcomings aside, I still enjoyed my little jaunt in the ocean.  I was genuinely interested in the story and plot and thanks to the acting from our protagonist, I cared about her too.  After completing the game, I wish there was more.  I want to know how the lands above were destroyed and how my discoveries will affect the world as it is now.  It’s a short, confined experience that may not appeal to everyone, but for those that like explorations and puzzles, you could do far worse than this.

What would I pay? $7.99 is a perfectly fair price for the content.  Intriguing story, great acting and nice visuals all make this a fun, contained exploration/puzzler worthy of your time and money.

Zoxide games provided theVRgrid.com with a review copy for this game and, regardless of this review, we thank them for that!