My god…where to begin.   Asgard’s Wrath has you playing as the newly created Norse god of animals caught up in the machinations of the other gods, specifically Loki.  Those familiar with that Mythology (or Marvel’s Thor films) will be familiar with many of the characters you’ll come across in your journeys across a few of the 9 realms. 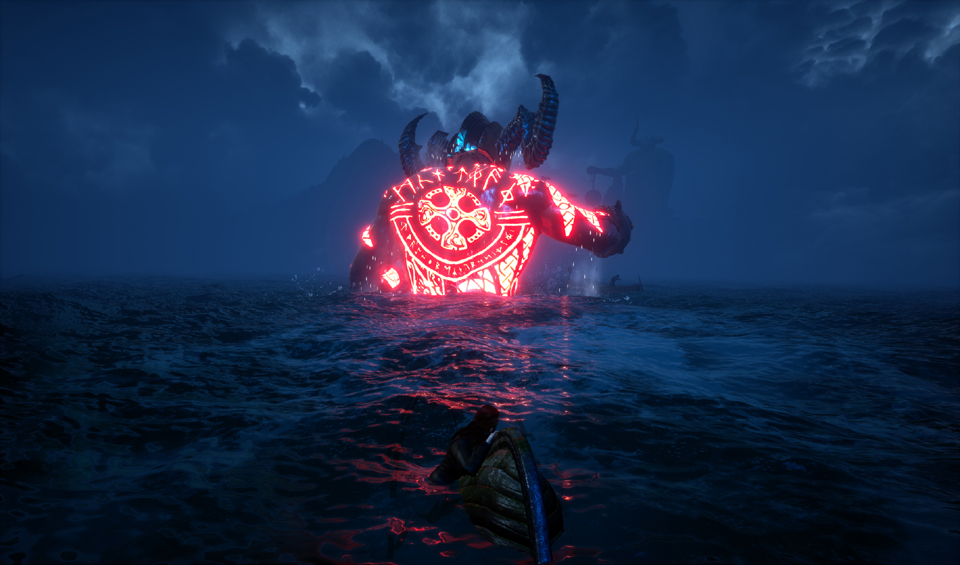 And so your quest begins!

This is a first-person adventure and controls as you would expect for any 1st person, melee-based title.  Where things get interesting are in the games many various mechanics that turn this into more then just a Norse version of Skyrim.  As a god, you are a giant amongst men, towering above, well, almost everything and can interact with the world around you by picking up smaller animals and larger obstacles.  Your interactions in your godly form are limited with the crux of the game being that you inhabit unsuspecting human folk and help them carry out their own storylines, creating an overarching story comprised of several smaller tales from the viewpoints of some very different people.  In your human form you can grab many items around you from ingredients needed for crafting and upgrading as well as weapons and shields, loot, levers and everything else you ‘ll need on your journey’s. Each character plays a little differently from the others with the 1st being a strong female warrior, out for revenge against the God of War and the next being a blind old man whose abilities are much more passive with the other all having their unique stories and traits.  Each body you put yourself in has their own strengths and weaknesses but don’t worry, you aren’t alone in your many quests as 1 of your godly powers is the ability to create animal sidekicks that can assist you in battle and help solve the large variety of puzzles and barriers scattered throughout the 25 hour main campaign with the total time needed to complete every quest in the game being closer to double that. 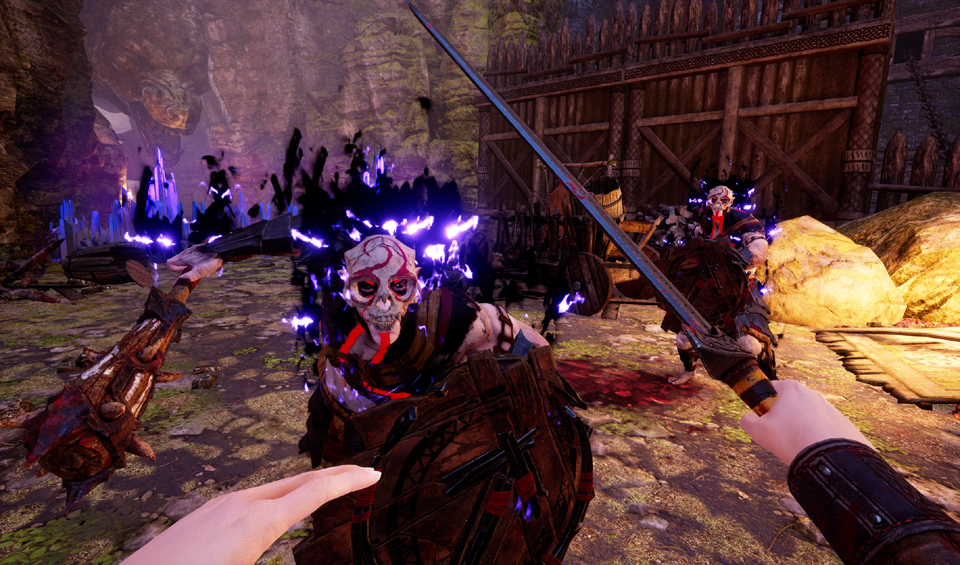 When you face multiple foes…things get tough!

While each character plays differently from the last they are all linked by one common denominator…you.  As you progress through the campaign, you’ll encounter barriers and puzzles that you just can’t s olve.  Throughout the game you will be able to summon those animal minions, each with their own ability.  Specific animals unlocked during a specific character’s story are typically needed more then the others and once you complete an area, you can revisit it later with the minions you have unlocked, making areas that were inaccessible early on now free to unlock and explore thanks in large part to your various minions.  Combat is also a key mechanic and the game does an excellent job of easing you into its many variations.  Initially it’s a waggle fest though that doesn’t last very long as you face more and more dangerous foes.  Soldiers may be covered in runic armor that can only be destroyed with a proper deflection of a power move.  Other attacks must be avoided at all costs as there is no defense save for a quick dash out of the way.  Add in bow and arrow mechanics as well as throwable weapons and you get a large array of attacks you can use to dispatch your foes.  Boss battles offer extra challenge and are a culmination of skills learned throughout the game up to that point forcing you to use what you have learned or be defeated. 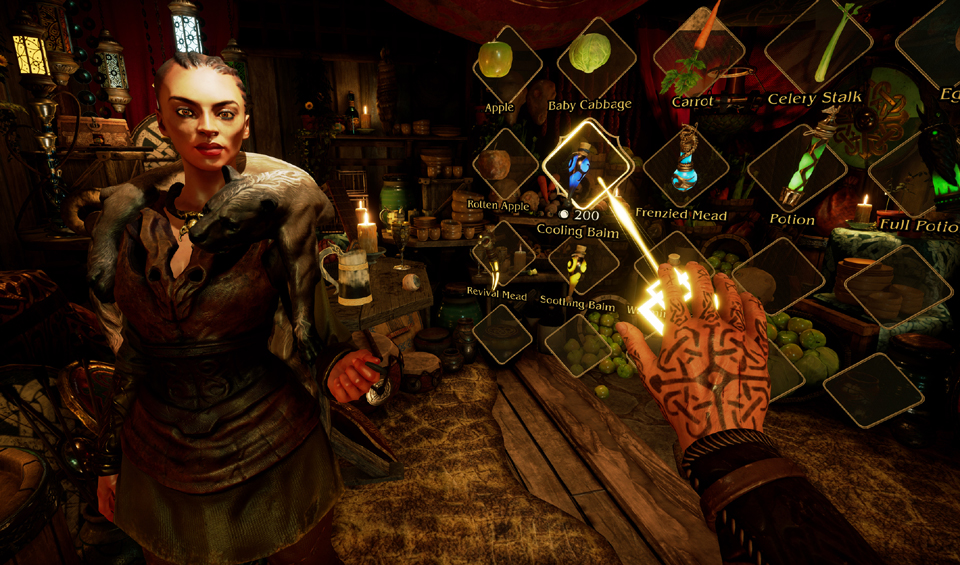 There’s a lot of items needed for crafting.

Other systems worth mentioning are the crafting and upgrade system which applies to all the different people you inhabit as well as your minions.  Characters don’t level up in the traditional fashion, but rather by upgrading their weapons and armor for permanent stat boosts.  Additional permanent upgrades are available from completing those side quests which get steadily more challenging as you travel through the campaign, though thankfully they state their difficulty before you choose whether to take them on or not, letting you decide the risks you want to take.  A checkpoint system is in place that works pretty well though I found on occasion I had to start a little way from where I perished or quit forcing a replay of battles fought and puzzles solved, though this was relatively infrequent and for the most part, this system worked great.  Basic comfort options are included in the menu system and additional in game options are available at stairwells and ladder allowing you to use them as if you would normally or grab bannisters and tied cloths at the top and bottom of ladders to quickly teleport to the opposite ends.  Food and potions must be consumed as you would in real life, and your minions as well must be taken care of keeping them in good health and celebrating victories with high-fives and fist bumps.  Weapons can be knocked from your hands and shield can be damaged and destroyed making them in ineffective and your weapon choices a little more vital.  If it’s not clear at this point Asgard’s Wrath has a level of depth that we don’t get enough of in VR, especially from games built specifically for our headsets. 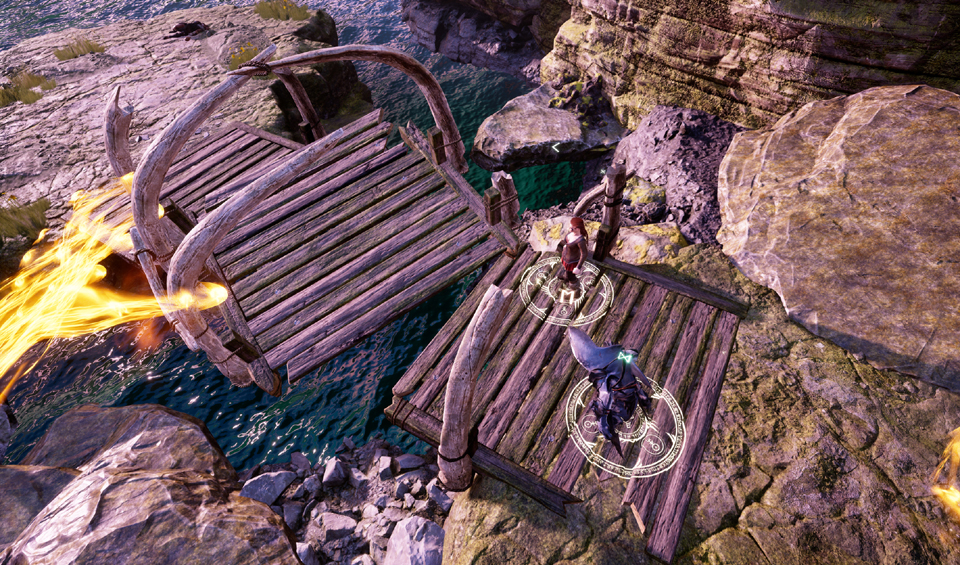 As a god, you help manipulate the terrain.

Asgard’s Wrath is nothing short of breathtaking when it comes to presentation.  From the opening moments where you fight a massive Kraken in a storm swept ocean to the smaller caves you’ll explore and Nordic cities you’ll stumble through, no matter what you will come across, it looks remarkable.  The developers have chosen to give you a fully animated body which looks great and adds an extra little bit of immersion that more games should consider implementing.  I’ve said many times that I feel that scale is underutilized in VR titles, yet with Asgard’s Wrath, it’s almost over utilized…almost.  Every time I changed views from human to god, I couldn’t help but marvel at just how much of this world was being rendered in either form.  It seems like no stone has gone unturned in ensuring that this is an immersive experience like few others.  You’ll spend some time in pub on Asgard with other gods, as this is your hub between missions, which is an absolute treat as the patrons have a drink and celebrate in rowdy fashion.  Here you can talk with Loki, though he will visit you throughout your quests also, who acts as your guide in this game pushing the story along and helping introduce each new mechanic through brief tutorials during the story. 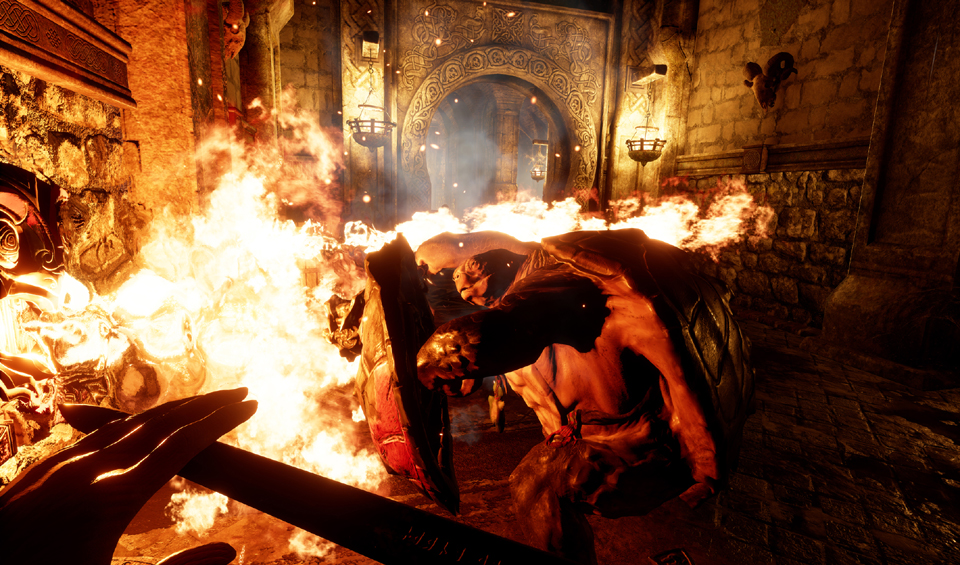 Your minions are then just extra warriors!

Everyone and everything in here is fully voiced which is great though I did find that the characters you inhabit did tend to shout out one-liners at weird times bemoaning the gods or expressing their anger while nothing was happening to them, which was off but besides those minor foibles, the voice acting was spot on. Upping the ante is the amazingly cinematic music which really hits its strides during the more intense moments of the game.  Bottom line here is the presentation goes above and beyond what I have seen EVER in VR and just when this game couldn’t possibly deliver more, it does, setting a new bar for what we should expect from AAA VR titles.

The game does have a few issues but trust me when I say that anything I whine about is almost inconsequential or irrelevant to the overall game, but I wouldn’t be doing my job if I didn’t address them.  The combat is tough at the onset and I found it very challenging to wait for the proper moments to strike, block and dodge though with practice and time spent in the game, I fell into a rhythm that was comfortable for me.  The menu system is phenomenal in some ways giving access to quick menus and organizing all your loot by type, but I found looking for items not in your quick menu to be a little clunky and sometimes frustrating as they may be miss categorized.  That only happened twice in playtime but did hold up my game long enough to be worth noting.  Certain death points occurred before a tutorial, forcing me to play through them more than once until I defeated the foes in my path.  I also found myself lost at times with objectives and quests being a little vague though I always figured these in no more then a few moments and never once did I ever encounter anything truly broken in the game. 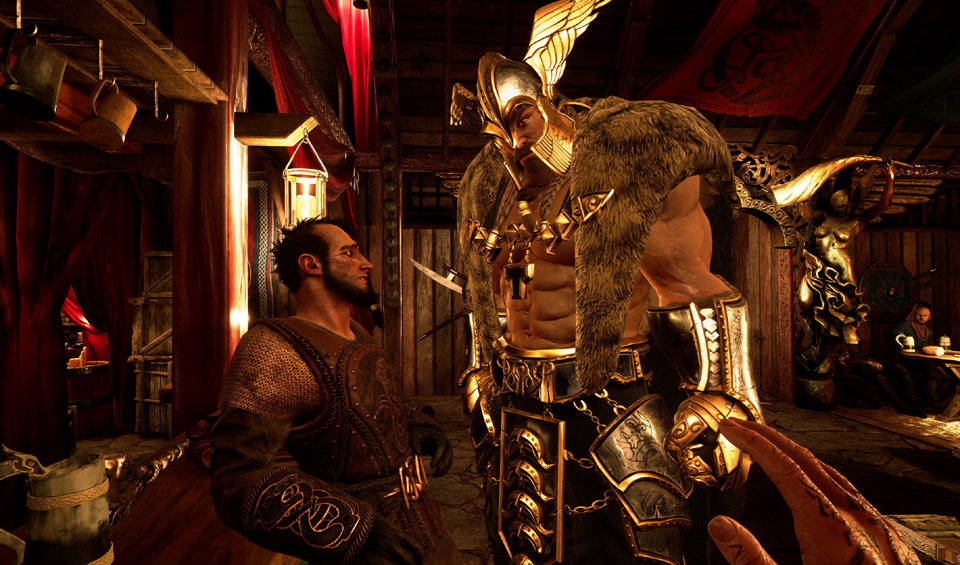 I’m sure I’ve missed a few topics I should have covered in this game, but it doesn’t matter…I like it…I like it a lot.  Asgard’s Wrath is an absolute breath of fresh air and not only a reminder of why I fell in love with VR in the first place, but a showcase of things to come.  The shear wonder I had at every set piece, new enemy, boss battle, the physics, puzzles and game mechanics had me enthralled from beginning to end and at the time of this review, I still need to complete a whole bunch of side quests, as indicated by progression charts in each area, ensuring I still have hours of time still to spend in this game and I can’t wait to dive back in!

What would I pay? Honestly, if we were grading games on a curve then by VR standards, this is worth $100 or more.  I know I’m being ridiculous when I say that, but I’m really trying to hammer home just how much awesome is here.  If you own a Rift, the $40 price is a steal and this needs to be added to your library as soon as possible.