Audio Arena is a single player game where the in-game music creates the game around you, spawning enemies to the beat of the music.  As far as I can tell the game was originally developed for the Gear VR and then ported over to the PC VR headsets. This causes a few complaints that we will get into later. 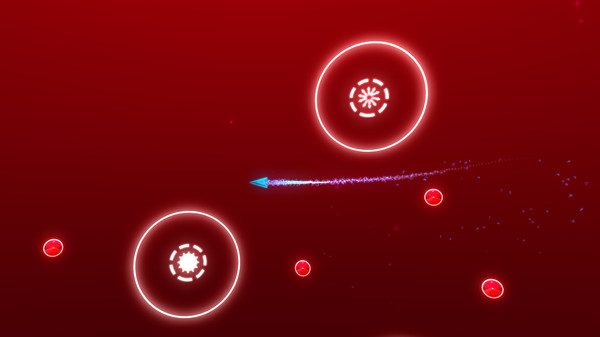 What you see is basically what you get.

Initially, Audio Arena is a lot of fun. You control a 2-dimensional spaceship and must avoid enemies. There are a few different types of enemies, ones that continuously move towards you, ones that move a lot faster on the beat of the music and a few more more. These enemies can “eat” each other and grow bigger and giving more points upon destruction. Enemies spawn on the beat and, while dodging all these enemies, you can also use power ups, which are bubbles that have a larger moving ring around them. When the ring is touching the power up, you want to smash into it, that is when it will be synced to the beat and be more powerful. These power-ups give you the abilities needed to kill the enemies. Power-ups range from small bombs to shields and a variety of projectiles.

I own and have heavily played Audioshield, which is another VR rhythm game and I was expecting Audio Arena to be similar in a sense. I went into Audio Arena with almost no research as to what it was before playing. I expected to be able to choose from my own library of songs and it would generate levels based on that, oh how I was wrong.

There are several stages or worlds of the game. Each stage or world has three songs to go through and each has several challenges to complete. These challenges range from world to world, but seem to mostly be along the lines of “get x points from one bomb” or “destroy an enemy of x value”. This got repetitive very quickly. Completing challenges gives the player “stars”. You need a certain number of stars to move onto the next world. This is not how I like my audio based games. If you are going to limit me to only the in-game songs, then at least let me pick from any of those songs, especially since just beating a song is not what helps you move on to the next world. 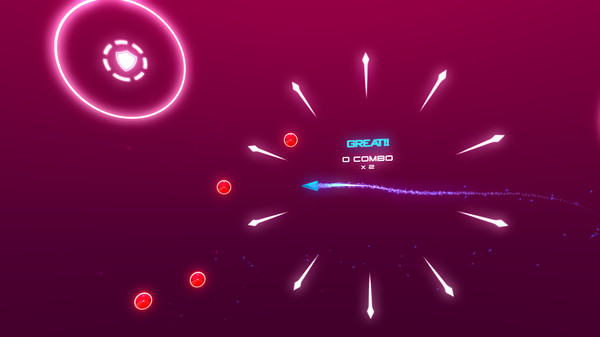 Sometimes the game can look a little pretty and relaxing

This is an audio rhythm based game. Since I don’t get to pick from my own music library, or search music online, then the soundtrack in the game better have a wide variety, or at least music that I enjoy. Sadly, this is not the case. The soundtrack in this game sounds what you might imagine elevator music to be. Sure, it’s not bad, but it doesn’t mean I want to listen to it. It’s more like it gets the job done and that’s all they cared about. This is my biggest complaint with this game. The day they make procedurally generated levels from the users music library, or from YouTube videos is the day I play this again.

The music isn’t great, but what about the mechanics? Well, they’re just okay. Everything works fine, but you can tell that it was a port a more basic VR headset. You can only control one ship, and there is no 3D to the environment. You only control the ship on kind of the inside of a cone where you are at the center. There is no moving your ship towards or away from you, it always stays on that 2d plane. You don’t even need controllers to play the game, you can enable the “gaze” option and the ship just moves to where you look. If you do use controllers then all you are using it as is basically a laser pointer where the end of the pointer is the spaceship.  I wish it was a bit more like Xortex (which is a free mini game within Steams “The Lab” game), but with a rhythm aspect. The main mechanic of moving the ship around and hitting the power ups on beat gets old quickly. Not because it’s not fun, but you aren’t really punished much for hitting the power ups offbeat and operating it on a 2D surface within VR just isn’t as entertaining as it would be in conventional gaming. 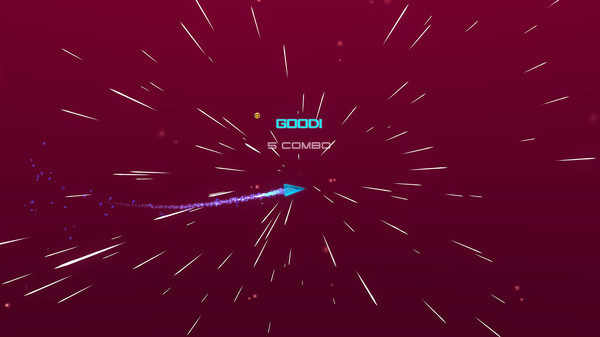 I can see how this game would be fun on a system more limited such as Gear VR.. I still believe it to be a more 2d game that doesn’t quite work in VR. It can be a fun little mini-game, but that is all I would consider it, not a full-fledged game. Something you could play one song of every now and then and then forget about for months.

What would I pay for this game? For a dollar it wouldn’t be bad as a quick game to play every occasionally. However, it’s price of $6.99 on steam or even its price of $2.99 on the Google play store is too high, unless they added some of the features I have discussed.