Released on the 10th of December 2019, Boneworks is the long-awaited, and much hyped, first-person advanced physics action-adventure game from VR industry veteran Stress Level Zero.

Building on the foundations they laid down with Hover Junkers and Duck Season, Stress Level Zero have delivered a quite astonishing love letter to the hard-core VR enthusiast with Boneworks. This is a developer that knows its audience intimately and delivers the game that they have been pining for since Oculus kick-started the DK2. It’s not a perfect game, but it’s a quite astonishing accomplishment and paves the way for the future of VR. 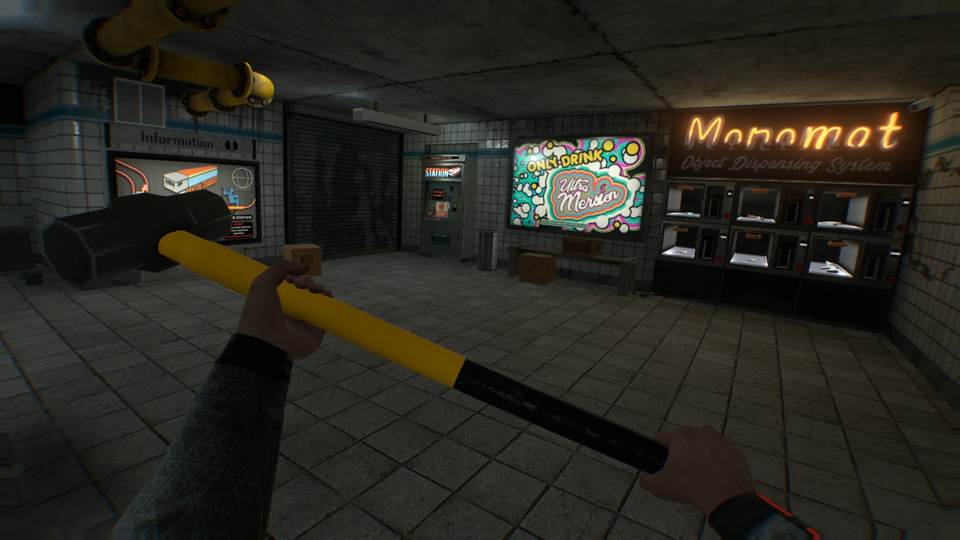 Riffing hard on the meta concept of a simulation within a simulation, the game has you investigating the inner workings of an A.I. operating system called Mythos OS that is run by  shady corporation Monogon Industries and seems to be breaking down. Depending on how long you take to explore each level of the campaign, you’re looking at a 10-14 hour playtime and after completing the campaign you unlock the Sandbox and Arena modes. All three of these modes are built around Boneworks’ next gen VR interactions and physics model. Simply put, you can interact with everything in the game world and every object has physics and reacts to how you manipulate it like it would in the real world. That almost sounds bland when written down but this level of interactivity and the consistency of the simulation, wrapped into a proper single-player campaign, is what hard-core VR enthusiasts have been calling for years and this is the first game to deliver on that promise.

Just in the opening menu room alone I spent an insane amount of time swinging a crowbar at a crate and marvelling at how I could hook it into one of the handles to pick it up and how realistically it worked. Things got even more next level when I tried to pull myself up onto a the top of a shelving cupboard with the crowbar (which worked!) but also ended up dragging the cupboard over due to my in-game weight. All the items on the shelf bounced off my in-game avatar in an incredibly realistic way resulting in a feeling of presence and immersion that we have just not had before in video games. 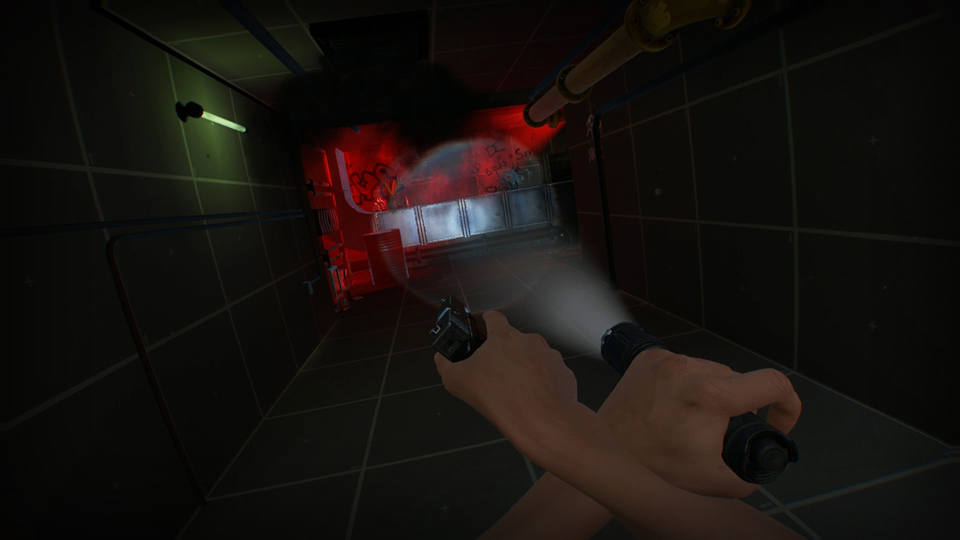 Something wicked lurks in the dark.

This high level of interactivity and the realistic physics also lends itself very well to interesting physics based puzzles, combat and exploration and Boneworks’ campaign does a fantastic job of leveraging this to the fullest. The comparisons to Half Life that this game has garnered over the past 2 years are not unwarranted and the core gameplay offers a similar experience as you fight a range of enemies with a wide variety of weapons, solve puzzles and use your imagination and creativity to work out how to get to the next area. It’s a winning formula that is taken to another level by the fact that you can tackle enemies and puzzles like you would in real life, as if you were actually there. The game actively encourages you to come at solutions your own way and the consistency of the physics models allows you to be very creative with your problem solving.

My first combat situation – which in some ways, due to its significance, reminded me of the seminal first zombie encounter in Resident Evil– in a minor way highlights this. Weapon-less, I found myself using a brick to pummel a Nullman (a sort of A.I. zombie) against a wall in a breathless encounter that saw me physically pushing the zombie away and then grabbing its head exactly how it would happen (I guess!) in real life. The consistency of the physics and interactivity allow you to think and react to situations as if you were really there. It’s wonderfully liberating and a huge amount of fun. Also, all of the weapons in the game behave like their real-word inspiration and the guns need to be aimed and reloaded just like they would in real life, resulting in a very satisfying gameplay loop once you become adept at using them. 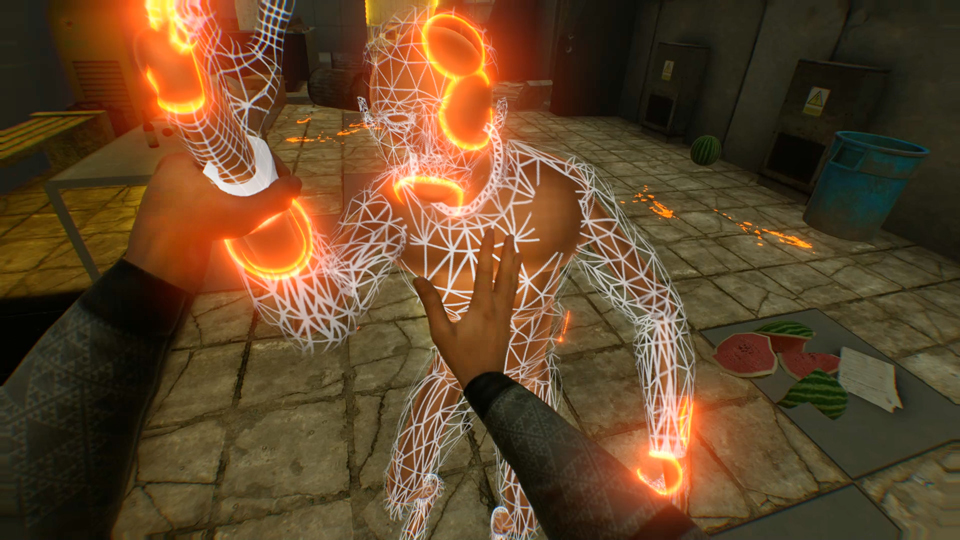 You can interact with literally everything!!!

The puzzles also lean into this physicality and have you picking up, throwing and using objects in creative ways that actively ask you to think about a solution as if you were actually in that situation. One small example of this was when I was trying to elevate a platform by pushing inverse gravity barrels underneath it. I was sure that I had put enough of these barrels under the platform to elevate it but it wasn’t moving. I then remembered that I’d left a heavy crate on the top of the platform and so went up there and pushed it off. Still nothing. Then I remembered that my in game avatar has weight as well and by standing on the platform I was keeping it from rising. After I jumped off the platform is rose up as expected. It’s a small example but it speaks to how intricately the developer has thought about the physics simulation and placing you in that situation. That being said, a few of the puzzles can get a bit fiddly and using the lifting trolley for moving massive objects can be annoyingly imprecise.

Stress Level Zero have also done a fantastic job with how the game looks and sounds. The visuals are uncomplicated – some might say a little plain – but they’re clean, clear and well optimised to keep performance steady in what is a taxing game given all the computation power going into the physics simulation. I feel like it’s another area where the developer has optimised the game by understanding what works well in VR. Most of the locations are in-doors which makes sense given the resolution and perspective limitations of the current generation of headsets which aren’t great at showing sweeping landscapes. There are also some lovely flourishes at times. I don’t want to ruin one of the visual surprises but I laughed out loud at the best implementation of 3D photography in a VR app that I have seen. Trust me, you’ll know it when you see it. Also, I think this is the best implementation of an IK body system I have seen and the way your in-game body reacts to every object in the game adds another layer of immersion. Audio is also excellent with very well implemented 3D spatial sound and a soundtrack that grew on me over time and fits the ambience well. 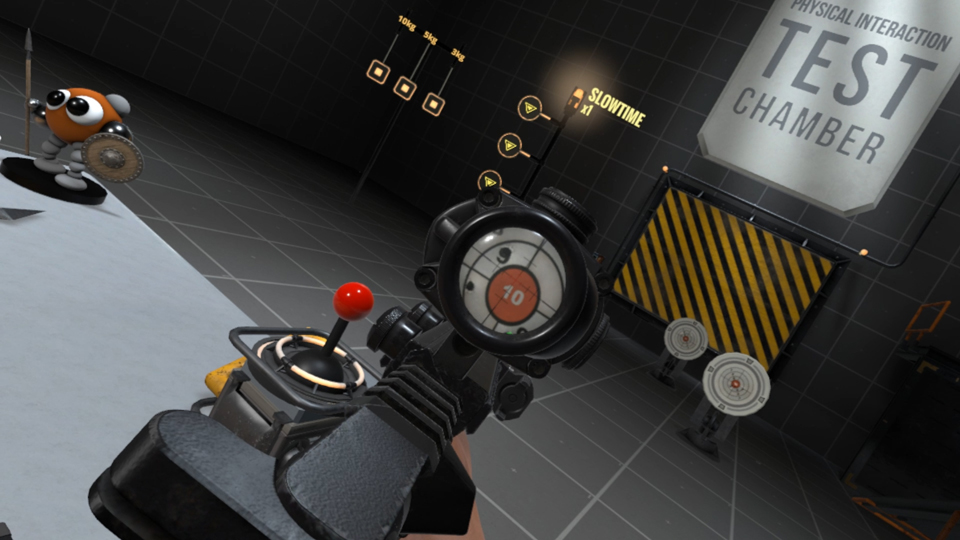 The gun play in here is definitely on the simulation side.

One point that is worth mentioning is that if you suffer from simulator sickness in VR this game could be tough for you. Movement is smooth locomotion only and teleporting is not an option. The game even jokes about this in an incredibly humorous and very meta training level set in a museum which shows you an exhibit on how VR teleporting is now extinct and a thing of the past. Given the mechanics and how physical the game is, teleporting really would not have worked but it’s worth noting for those with a weak stomach.

Boneworks is not without faults. The story is pretty obtuse, hard to follow and it’s relatively easy to miss the small titbits of information doled out in each level. What is there is pretty interesting and riffs on Portal quite hard, but I found the story washing over me a bit. I don’t think it impacts too much on the enjoyment of the campaign, but it is a shame that it doesn’t have more significance and finesse. My biggest issue with Boneworks at launch though is its complete lack of a save and quit function. I find this omission baffling in a single player game. The game only saves your progress when you get to the end of a level, meaning that if you get stuck on a tough puzzle half way through a level and then have to quit out of the game (you know, when real life happens!) your progress in that level is lost and you have to start the level again. The levels are not that long but they’re long enough for this to be a massive inconvenience. It is fun to replay the levels but forcing you to do this through a lack of a save option is the not the right approach. This is a relatively easy fix and one I hope gets implemented quickly. 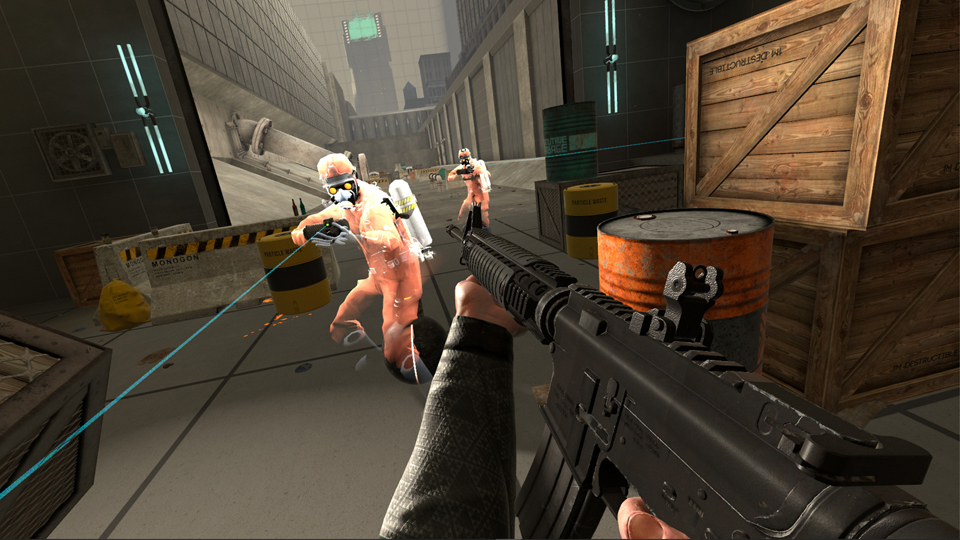 The combat is intense!

As I mentioned at the start of this review, Boneworks is not a perfect game but it is the first game of a new generation of VR games that take our ability to interact within a game world to an entirely new level. The freedom and sheer fun of being able to tackle each obstacle in this world like you’re actually there is just incredibly profound and creates a level of immersion that is going to be hard to come back from. It also makes me incredibly excited for the future of VR as I’m sure we’ll see subsequent games takes these principles and refine and evolve them.

What would I pay? £23 is excellent value for money when you consider you’re getting a full 10-14 hour single player campaign plus comprehensive Sandbox and Arena modes.