Since the PSVR launch 6 months ago, we have seen a few vehicular based multiplayer combat games.  Battlezone gave us a taste of futuristic tank warfare, Eve threw us behind the cockpit for some epic space battles and Rigs offered up a competitive mech battler.  Now comes Starblood Arena, the much hyped “next big thing” for competitive VR multiplayer and while it does have a tonne of polish and cartoonish charm, it’s not without it’s own flaws. 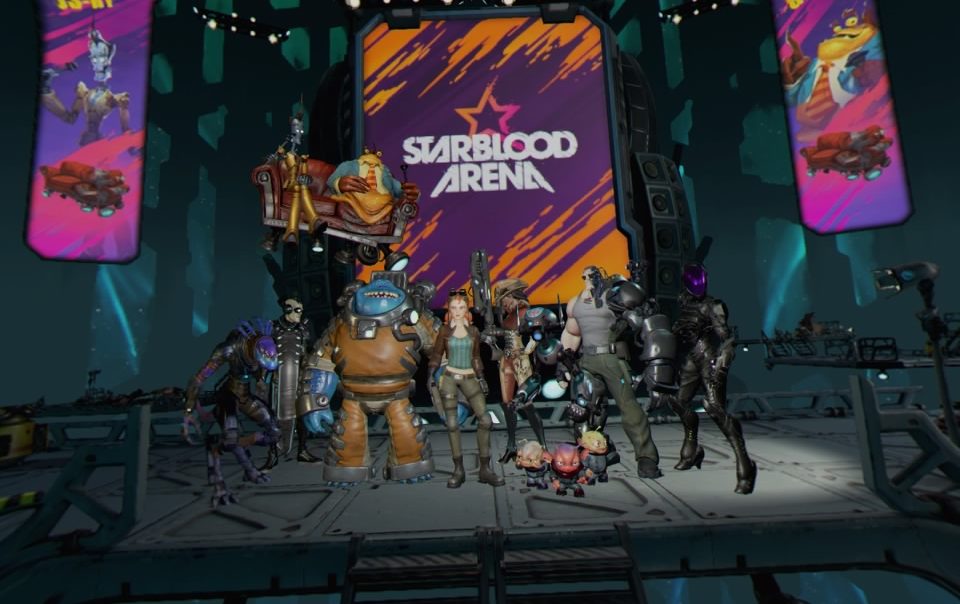 Looks like the gang is all here, these are your pilots btw.

If you have played games like ‘Descent’ or ‘Forsaken’(I’m dating myself huge with those references) than you will instantly familiar with what is expected of you.  You pilot a small combat ship armed with a variety of weapons and defenses, tasked with destroying the opposition.  A small range of modes, both single player and multiplayer, are here to make sure you always have something to do.  Add in a tonne of unlockables and upgrades and we have ourselves an oh-so typical modern day shooter.

The visuals offered up are polished and clean.  Ships have a fair bit of detail and the character models carry a cartoonish, stylized flare.  Some look just badass, while others are a little cutesier ensuring that there is a character for everyone.  The stages are detailed with everything looking very crisp and clear.  Based on color palette some stages come off a little bland, but for the most part are solid and a joy to look at.  The worst thing I can say is that in the heat of the moment, it can be a little confusing and disorienting when explosions are happening around you, shields are getting hit and your HUD is lit up with targeting reticles, but that’s a good kind of problem to have.

The audio consists of some forgettable tracks that lend themselves well to the action, but fail to stand out as anything more than a game requirement and a better option than silence.  Accompanying you throughout the game are 2 commentators who offer “funny” one-liners and other forgettable quotes.  They never annoyed me, but they never really entertained to much either.  They were just sort of there, saying stuff that I didn’t really bother paying attention to. 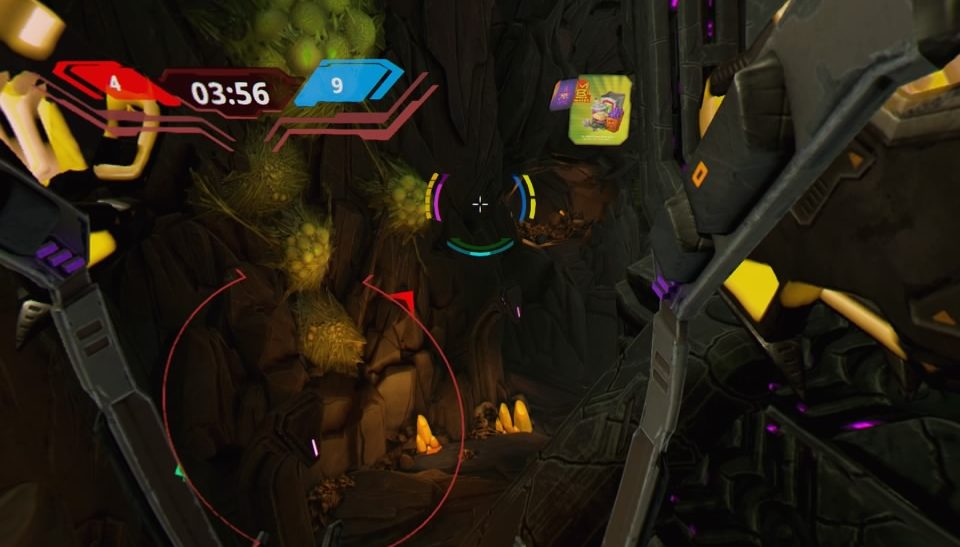 In every game I have ever seen those gross pod things, I feel the need to shoot all them…every time!

The controls here are DS4 and HOTAS and will took me a long while to get [almost] comfortable with one of the more complex control schemes I have seen in recent memory.  With 6 DOF; moving forward, backward left and right, all handled with the Left Joystick, you also control how much you rise and fall with triggers, throw in yaw control, weapon selection, boosting, targeting, special weapons and you’ll be struggling to remember what button to hit just to navigate the map properly.  I’m not trashing the control scheme, but its daunting and will take a lot off time and practice to master.

After an extended intro and an optional (but recommended!) tutorial, you are free to choose from Single or Multiplayer game modes.  Single Player consists of Burn Circuit and Skirmish.  Skirmish is obviously a one off match in one of four modes; Carnage: a free-for-all deathmatch, Team Carnage: figure it out, Grid Iron: A team based soccer-type game ala capture the flag, and lastly, Invaders! A team based survival game against endless waves of enemies.  Each of these modes offers their own brand of chaos but mix up gameplay just enough to separate themselves from each other.  Burn Circuit is a campaign mode of sorts with set levels to power your way though, each getting more challenging.  It’s a nice addition but feels more like padding when compared to the other modes.

Multiplayer offers the same modes and is a blast…if you can find a match.  The rough launch of Starblood did not do this game any favors as far as fan base goes, and while those server issues have since been remedied, it can still be a difficult task finding online match ups.  As of this review Wednesday and Sunday nights are the only real chance you have at playing online thanks to events put on by the devs.  Regardless, the multiplayer is a blast, even with the lack of mic support, and games are hectic and entertaining. I definitely recommend playing through the some single play games to both familiarize yourself with the controls and purchase an upgrade or 2.  The user base may be on the light side, but the guys that play it are veterans and will school noobs at every opportunity.

Upgrades come in the form of cards purchased with the in-game currency ‘Bloodbux’ which you accrue through single and multiplayer matches.  You can buy a slough of upgrades for your ship(weapons, armor and so on) as well as some more superfluous additions.  Besides outfits for your character and paint jobs for your ship, maybe your ship needs a new hat or some giant flexing arms mounted to each side.  These customizations easily pass the ridiculous line, but in a good way allowing you to make your ship look relatively unique. 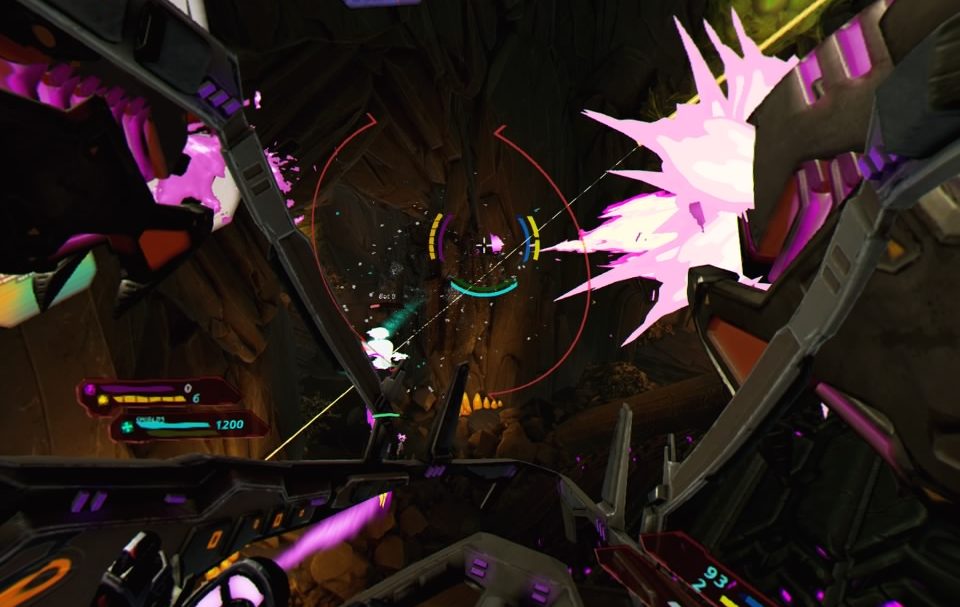 At any given time their can be a lot going on and you get easily disoriented!

This is a fun, well polished and handily made experience, but it just didn’t grab me.  The control, though complex, can be mastered with a little practice.  The audio and visuals are the same, well done and for the most part is on the better end of PSVR visuals.  The gameplay is also great, just take the time to figure out all the games nuances and master the controls before delving into some online fun/chaos.  The differing modes do mix up gameplay a bit, but Invaders! comes off as a shallow Wave mode while the rest offer tried and true methods of play.  Ultimately this is a win and deserves more attention now that the launch issues have been fixed.  The single player content is a bit shallow and repetitive, but the online more than makes up for that.

What would I pay? $30US  It’ll offer some fun for sure, even just in single player mode.  It’s a pretty good game and one of the few competitive multiplayer experiences available on the PSVR.