The 2nd VR Walking Dead title to grace our headsets this year has arrived in the form of Survios’s The Walking Dead Onslaught though unlike Saints & Sinners, this takes place in the AMC Walking Dead universe and features characters and actors from that series.  Taking place between the 6 year gap that happened in season 9,  you play as Rick Grimes, Daryl Dixon and a few other leading characters just after the war with the Saviors and must continue to not only survive in this zombie ridden apocalypse, but rebuild and grow your home, the town Alexandria. 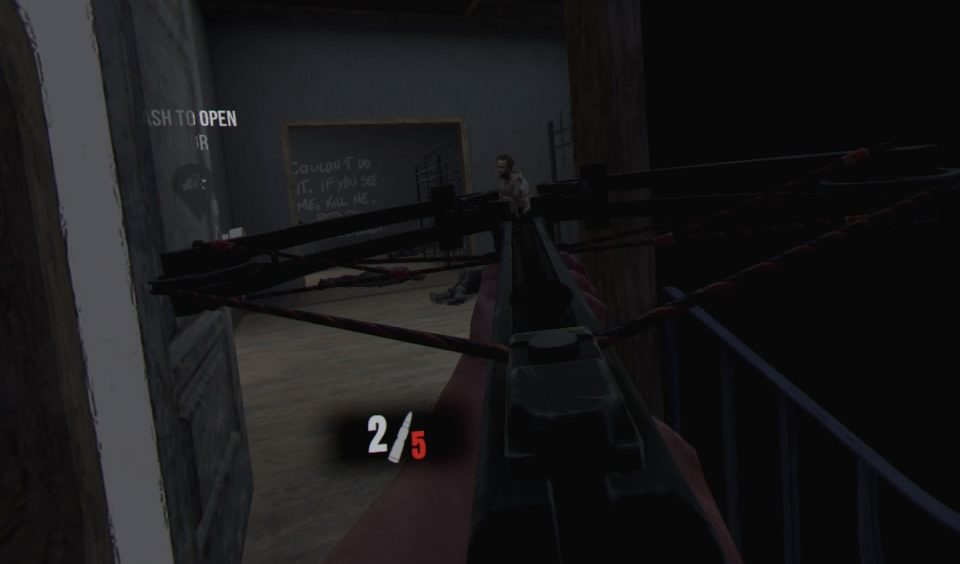 Move controllers are required here with 2 locomotion options to choose from.  The 1st has your off hand handling a bulk of the movement via button presses and your other hand handling weapons.  The 2nd requires you to swing your arms in a walking motion to move around with button presses to determine if you are walking forward or backwards, which I found to be incredibly awkward and cumbersome, so I stuck with the all button control scheme.   Killing zombies can be done in a few ways, the easiest of which is just stabbing or shooting them in the head.  Reloading is as simple as ejecting a clip and  grabbing ammo at your belt and bringing it to your gun, going for a half-realistic approach to the gunplay.  Of course, you can’t always keep your distance so with your trusty knife, or any another melee weapon unlocked during the campaign, you can easily stab those walkers in the head.  Adding some physicality to the game is the ability to grab zombies by the throat for easier kills or just shove them back, where they will often stumble to the ground and if they bump into another zombie, knock them back as well.  Grabbing the zombies can be a tad finicky at first and even when I had that down to a science, the game might not quite register my attempts, causing me to take some minor damage. 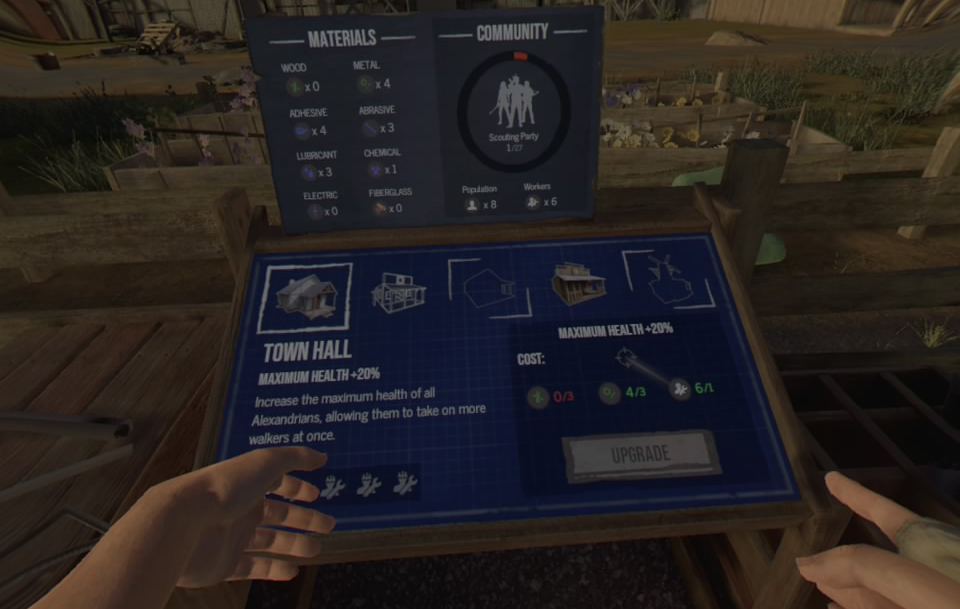 You are responsible for rebuilding Alexandria.

There are 2 different game modes that occur during the campaign, the 1st of which involves playing as Daryl, the crossbow wielding loner who recounts a story about trying to track down a little girl.  The second has you playing as Rick and the crew where you go on scavenging missions to get supplies for Alexandria.  These are timed missions that have you scouring areas surrounding Alexandria to bring back whatever you can find to help rebuild the town, upgrade your weapons and unlock the next chapter in Daryl’s story.  These are handled in interesting ways with some levels being long and narrow with a zombie horde moving in fast, which is represented by a red wall and storm clouds slowly moving through the level with zombie silhouettes right behind it.  You’ll need to stay away from the horde while breaking down doors and grabbing whatever you can for supplies and searching for key items and new weapons with your rescuers waiting at the opposite end the level, which of course is also littered with the undead .  The second is just a countdown which has you in a smaller contained area where you need to raid and survive for a set amount of time with your ride showing up at 1 of a few locations so you never know where you’ll need to be until your rescuers radio in.  You’ll have to alternate between story and scavenging as you’ll need a certain amount of rescued people to unlock the next storied chapter and to get those people, you just need to collect as much food and supplies as you can on a scavenging runs or the story mode, and once unlocked you can revisit those location again and again. 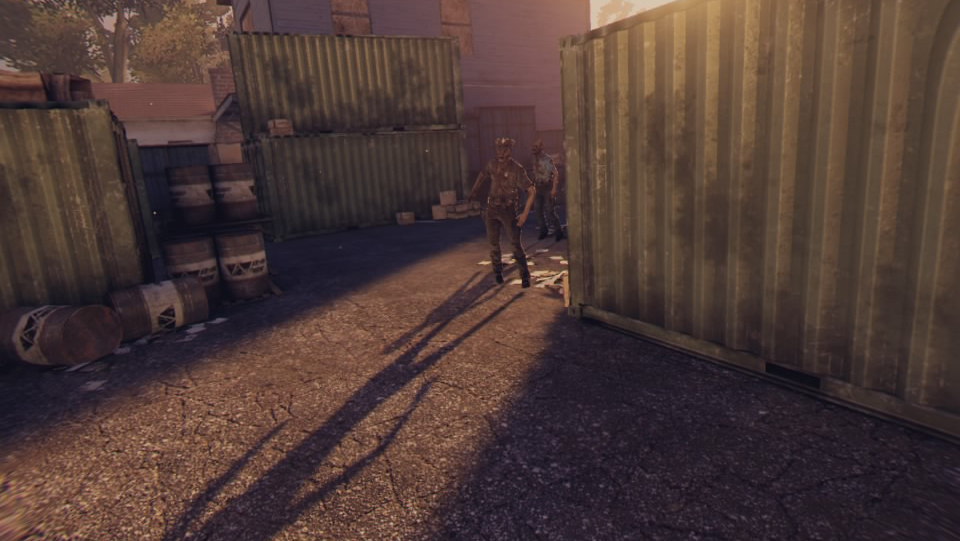 Zombies aren’t too much of a threat in this one.

Saints and Sinners benefits from its relation to the TV series thanks to the familiar locale of Alexandria and and its inhabitants.  As a fan of the show, it was fun too see these familiar characters in VR and be in this Universe.  That said, don’t expect to be blown away by the presentation here as it opts for a more realistic look and looks great…by PS3 standards.  Environments can look very washed out and bland making a bulk of this game just look drab though the latter half of the campaign does look a little better than 1st thanks to environments you’ll find yourself in.  That said, the zombies look good and the character models do a decent job at looking like their real life counter parts.  You’ll be visiting a wide variety of locations from forested areas, military bases, city streets, neighbourhoods and a few more nice surprises that do keep the campaign feeling fresh.  Thankfully, the gore factor is pretty high so for those looking to bash in a zombies skull, you can!  Head stabs reveal the bones in the skulls with blood splattering everywhere and once you unlock a few weapons, you can dismember limbs though that doesn’t always work as intended.  A welcome addition is that you have a fully animated body, which I always appreciate in VR and it also gives the character choice when you go on scavenging missions a little meaning as you feel like you are in their shoes, though each one behaves identically otherwise.   One annoyance with the game is the ghost hands that show up over your in-game hands which show off your Move and hand position in the real world which honestly seems pointless as I assume it’s there to show tracking issues, which are usually apparent as we all know what it looks like when the camera can no longer see your hands.  Their are options to toggle huds and tracking area, but at launch, there is no way to turn off the glowing red hands?  One final visual gripe is the wind lines that appear when you are running, which also just looks silly as it’s fairly easy to tell the difference between walking and running.  It has a few visual highlights, but for the most part, what’s here gets the job done and not much else.

Those familiar with the show will recognize a few voices with Norman Reedus, Carol Peletier and Josh McDermitt reprising their roles as Daryl, Carol & Eugene respectively with the other main characters being voiced by competent voice actors who do alright at imitating their TV counterparts.  The iconic theme is of course present but has been remixed to sound a little more somber and where the game maybe lacking in visuals, the exact opposite can be said with the audio.  There’s a fair bit of voice work in here with Daryl narrating his chapters and expanding on the events as you are playing through them, which was a fun way to play through the missions.  Music is on point and the effects never miss a beat with every gory kill, gunshot & walker sounding exactly as they should.  My only complaints with the audio are the one-liners your character of choice will blurt out when they get a kill, which sound cheesy or don’t quite match the action like when you bash a a zombies head in and your character talks about head shots, but those are very, very minor issues. 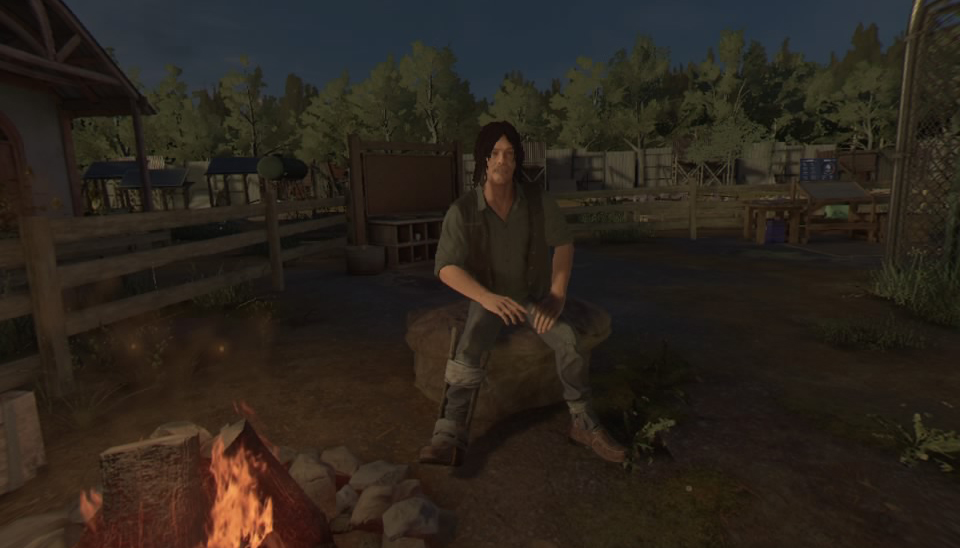 Daryl is quite the story teller.

Onslaught takes a more acradey approach to the Walking Dead universe and while still feeling authentic, it won’t be for everyone.  On medium difficulty, once I mastered grabbing zombies, I was stabbing them relentlessly to a point where my knives became my weapon of choice over anything else.  Headshots with a gun might not kill a zombie on the 1st, 2nd or 3rd shot and some may take several if they are wearing armor, but a well-placed knife gets them every time.  Due to that little fact, the game is fairly easy as you can basically push and stab your way out of any situation, no matter how dire.  It’s still fun, but that sense challenge and unease at what’s around the next corner just isn’t their, making this much more of a monotonous action title than anything else.  When you build and upgrade said buildings in Alexandria, they provide you with boosts to your health and ammo but even that doesn’t really matter a whole lot as you can knife your way through the game, taking minimal damage.  Their are some nice little touches like reading about the background of the people you rescue and other nods to the show, but that’s as far as your interaction goes in Alexandra as you are locked in a very small hub area with the town surrounding you.  You’ll be scouring the environments to accrue as much supplies as possible and for the most part, I never really had to revisit those stages more than a couple times so on that side of things, it wasn’t to repetitive though the game overall does all feel the same anyways. 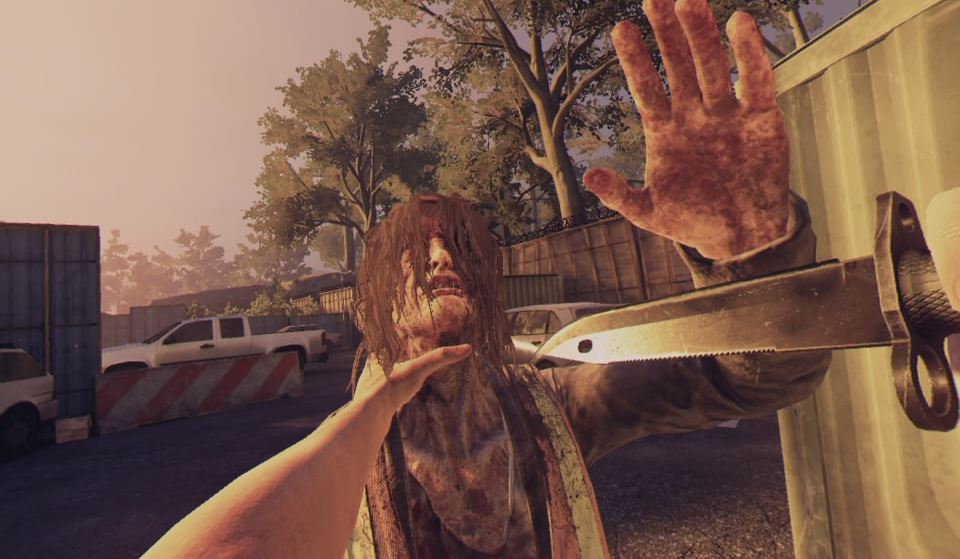 You know what happens next.

Fans of the series will pull more out of this than those who aren’t but strip away that licensing and we have a zombie survival game that’s quite shallow when it comes to gamplay and survival, even on hardest difficulty.  Their are plenty of elements at play in here but when you step back and take a look at what you are doing, a bulk of it seems rather pointless.  I enjoyed both Daryl’s story and the scavenging stuff too, but without the challenge those missions became redundant and became more of a way to extend the games 8 hour campaign.  It’s not awful by any stretch but it’s rough around the edges and once zombie killing gets boring, which won’t take too long, we are left with a pretty monotonous game overall.

What would I pay?  This is $30 US and while it checks off my usual boxes to recommend for that price, due to it’s many issues and bland gameplay, $20 is as high as I would go for this.  I had fun for the 1st hour or so, but after that, it became to easy and monotonous and I just got bored playing this.