“Battlesky VR” is a multiplayer-focused shooter which finally shows us what it feels like to assume the role of “Iron Man” in VR. This game has the potential to be a fun and addictive class-based experience, but it’s held down by a lack of content and generally janky design. This game attempts to become an ideal VR class-based multiplayer game, citing Overwatch as a primary influence. While I’m ultimately convinced that this could be the case someday, for the time being, it feels like little more than a demo. 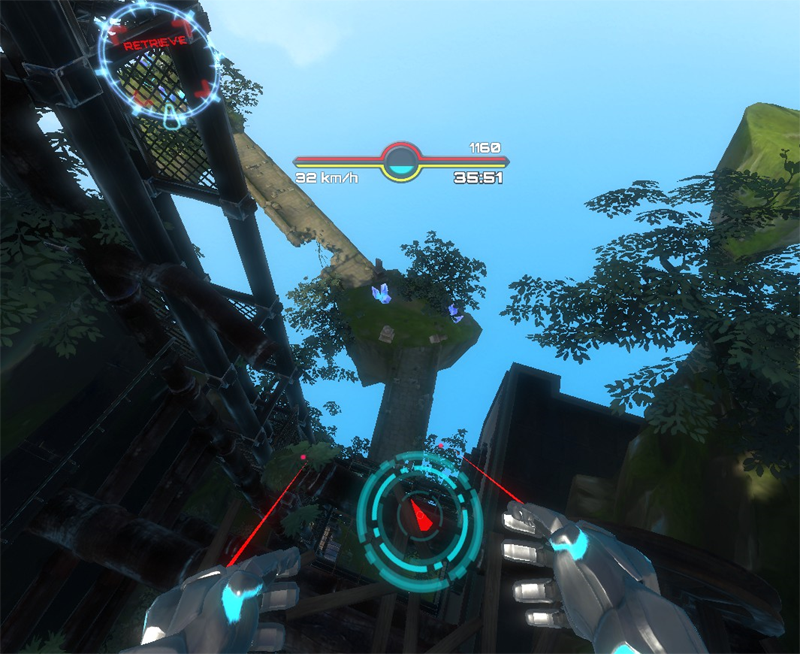 Flying as Jet-9 can be a properly exhilarating experience

Battlesky VR contains four game modes, playable between two maps, as two characters (with a third allegedly coming very soon). Let’s begin by discussing character design, arguably this game’s most impressive aspect. “Jet-9” is a sci-fi soldier equipped with rocket boosters, a machine-gun, railgun, and wrist-mounted rocket launcher. Flying as Jet-9 requires the player put their hands to their sides and blast upward, which feels every bit as cool as it sounds. In my experience, however, holding the controllers by your hips and pointing them downwards resulted in frequent VR tracking issues. Still, this character provides a properly-badass exosuit experience, making the player feel more like “Iron Man” than any other VR title to date. The weapons are varied, combat is fast-paced, and despite having a cliche design, gameplay feels entirely unique.

You can also play as “Draco,” a typical fire-breathing dragon. Draco boasts a variety of fire-based attacks and can fly using his wings. Playing as Draco is extremely fun and feels like the quintessential dragon experience. Although your wings are scaled down to the size of your controllers (making your size proportions feel off), this character makes you feel like you’re playing as a major boss battle. Enemy soldiers cower in fear as you spew hellfire upon them. Sweeping the battlefield as Draco, for this reason, results both in this game’s best aspect and its worst. 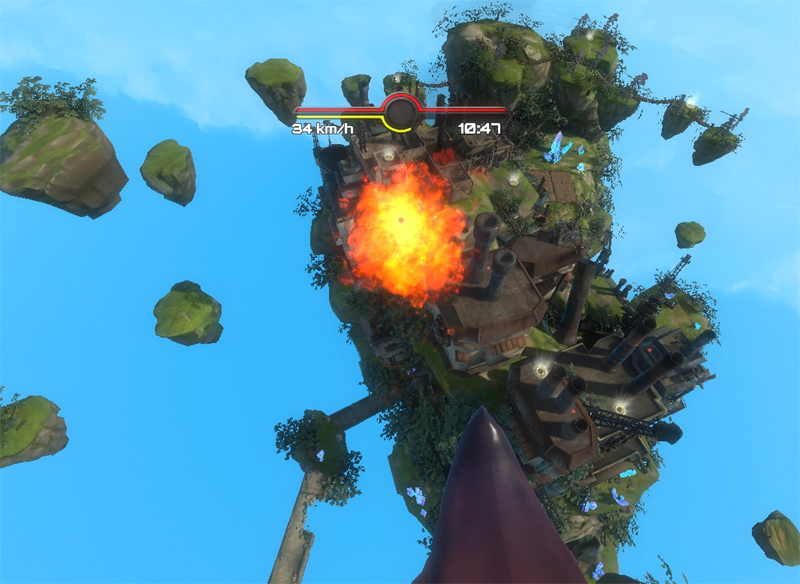 Or rain hell from above as Draco.

As a class-based multiplayer shooter, the variation between the two major characters is impressive. Jet-9 and Draco play like entirely different games, which is especially true in regard to their different methods of flying. We have yet to see what future additions to the cast will bring, but if they’re as diversified as the differences between these two characters suggest, Battlesky could become a shining example of VR class-based multiplayer done right. Based on what Jet-9 and Draco already bring to the table, I have enormous hopes for what this game could become if it had at least half a dozen characters, each holding different combat roles.

While the current experience is encouraging for the future of the game, this is also its biggest issue. As an early access title, Battlesky is currently very low on content. With only two characters, them being Jet-9 and Draco in particular, the experience becomes increasingly limited. While two single-player modes as well as two multiplayer modes may sound like a solid amount, only one of the four is enjoyable. Seeing as how not a single player is online at any given time (I have not seen anybody, despite checking at various points in the day), and the game has no bots to fight, the multiplayer PvP mode is obsolete and unplayable.

Even if there were other players online, it wouldn’t be remotely balanced. Draco functions as a tank, with a huge amount of health and dealing tons of damage. Since players can spawn as either character, I doubt there would be enough people playing as Jet-9 to stand a fighting chance. If Draco’s spawn were limited, with other characters available besides the current two, his presence would only stand to improve the experience. As it stands, however, this game’s balancing (or lack thereof) shows that it may not even be ready for an expansive player base.

To a lesser degree, the same could be said about cooperative mode: Although you’re able to play it solo, this mode is far too difficult. Enemies have high health and can kill you very quickly. Turrets, only spawning in this mode, have such high health that they were clearly intended as a multiple-player focus target. The objective here is to guide a blimp through a series of goals, by staying in its vicinity, with more players moving it faster. This is impossible, for a handful of reasons: Firstly, because enemies have such high health, a lone player will simply not be capable of killing them whilst simultaneously guiding the blimp. Additionally, the blimp won’t even move fast enough if it doesn’t have multiple players standing on it. Because you must reach the checkpoint before a (rather short) timer reaches zero, you simply can’t move the blimp fast enough without other players. Possibly the worst design flaw in cooperative mode is how it contradicts Battlesky’s own gameplay mechanics: this is a fast-paced, flight-based game which requires you constantly soar through the sky or else risk death. This works very well and flying while shooting is an excellent experience. However, the very objective in cooperative mode requires you stand still on a blimp, making survival- let alone completion- a nearly unattainable goal. Even with other players, this mode would be far too difficult.

Battlesky features a single player racing mode, consisting of the fairly generic fly-through-the-rings formula. Nothing really varies in this mode, and since you must fly through a ridiculously large number of them, it gets boring and tedious very quickly. Although you can race as either Jet-9 or Draco, the latter is at a huge disadvantage. Jet-9 is relatively small and can be propelled in any direction with slight movement of the controllers. Draco, in contrast, must flap his wings up and down while turning his head to gently steer. Both movement styles are fun and work well, and their variation is a unique gameplay feature. However, Draco’s style of flight makes racing mode highly frustrating. This doesn’t bode well for future character developments or possible increases in the size of the game’s playerbase; it would be nice to have a variety of different characters racing against each other, rather than a group exclusively consisting of Jet-9s. Racing mode is also somewhat glitchy, with rings lighting up (as if I’d flown through them) when I wasn’t even close.

Lastly, Battlesky has a true single player mode, which was easily the most fun I had during my time playing. A fairly challenging series of enemies must be eliminated while collecting energy from crystals throughout the map. This sequence shows off some of the best gameplay that this game has to offer, with a solid structure of events and thrilling gameplay, taking place in a relatively sprawling and varied environment. This mode has some unfortunate limitations, however. Since this level serves as a tutorial mission for playing as Jet-9, you can’t play as Draco here. Since Draco also isn’t much fun to play in racing mode, he’s left out from most of the game. It only takes around 25 minutes to complete the level and seeing as this is where my only genuine enjoyment of the game took place, the content value doesn’t really hold up. 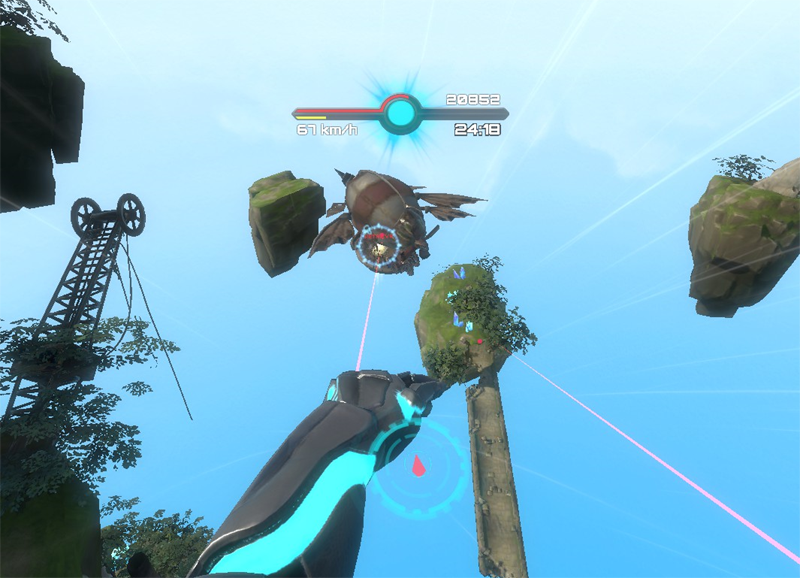 Boss battles in the singleplayer mode are surprisingly decent

As of this review, Battlesky features two maps, although I’m almost certain that one is just a darkened night-time version of the other. Nonetheless, I’m impressed with its design. It’s composed of several magical floating islands, with different environmental factors throughout. This map is much larger than what I’d expect from most multiplayer games, and its variation makes it hard to get tired of- even though it’s really the only one. Since it takes place in the open sky, this map also does an exceptional job at working with the game’s flight mechanics, with 6-degrees of freedom and combat that can be approached from any angle.

This map is well-designed enough that it makes up for the game’s sub-par graphics, which are smudgy and have almost uncomfortably low-resolution textures. Battlesky’s graphics would fit right into the gold standard of 2003. The user interface has all the options and menus you could hope for, with one major annoyance: Every time you start a round, the game starts an unnecessary countdown from five to zero, blaring a horrendous and distorted beeping noise at least double the volume of the game itself. While this sounds like a petty complaint, I don’t think I’m exaggerating when I say that this was among the most irritating sounds I’ve heard in my life. On more than one occasion, I actually quit the game seconds after starting, because this sound had given me such a bad headache.

What would I pay for it?  Battlesky VR has “potential” written all over it. If it had many more characters, more maps, and an expansive single player mode, this game could potentially be a best-seller. The combat is fun, the map is designed well, and it will probably see a diverse cast of characters throughout its development cycle (which, as far as I’m aware, has been fairly active). With enough diverse combat roles, this really could become the VR equivalent to a game like Overwatch. For now, however, the amount of truly enjoyable content is at a bare minimum. I personally wouldn’t recommend paying more than $5 for Battlesky VR, but if you’re interested in supporting the developers, the $10 price tag isn’t too unreasonable.

Oh!WHATif Inc. provided Th VR Grid with a review code for this title and, regardless of this review, we thank them for that!