Humble Pie is an incredibly short dose of political comedy that advertises itself as a “virtual therapy.” I agree with the general message of the game, but as a joke, it doesn’t make much sense. You play as the white house chef, baking delicious pies in the oval office. No baking actually occurs, however- instead, the whole game is based on throwing pies at Donald Trump’s head as he mindlessly runs in circles around the room.

For the first two levels, that’s all that happens. You can’t lose, but if you get a headshot, you receive double points. In contrast, during the third level, Trump calls in the secret service. Sticking to the theme, rather than shooting at you, these two agents throw pies, killing you after three hits. Trump’s hyper dancing around them, and the risk of losing, makes this level an intense challenge. 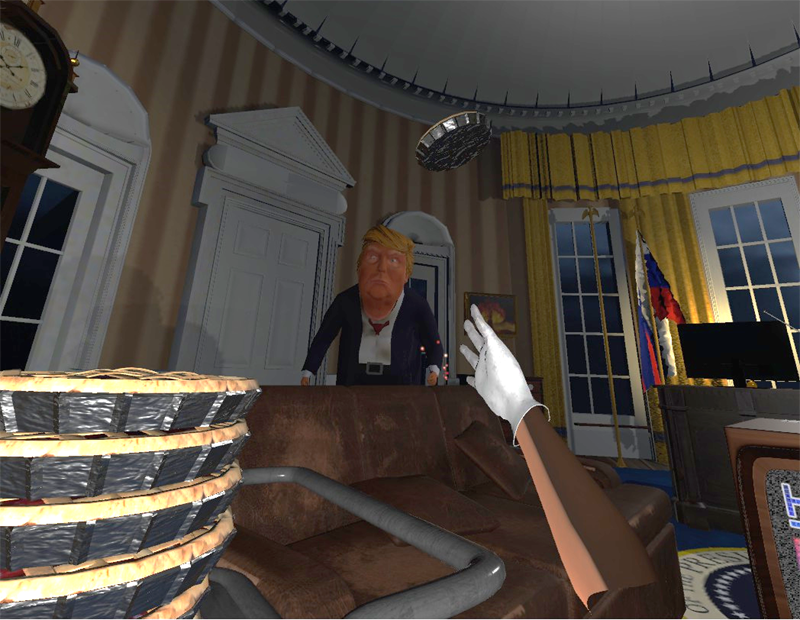 “My pies are the best pies, nobody beats my pies”

Once a timer runs out, Trump collapses as the level ends and you receive a high score. The physics of the game feels off, as your pies fly through the air slowly as if they were in zero-gravity. Although this makes the game feel clunky and unrealistic, it hugely adds to its difficulty. Therefore, there’s a huge variety in possible high scores you can achieve, adding to the game’s replay value.

It’s a relief that this game has any replay value at all, because it’s short. Really short. I fully beat the game twice, including several deaths, only to realize that I’d played it for a total of eight minutes. Eight. I can’t blame it too much for a lack of content, as it provides a single, specific arcade niche: the bare-bones satisfaction of throwing pies at Trump’s face. Humble Pie feels like a mini-game taken out of a larger experience. I don’t even think throwing pies at the president is remotely controversial, but this game’s content value certainly is.

Humble Pie accomplishes all that it sets out to do. Throwing pies at Trump’s face is an incredibly satisfying time, while it lasts. As a comedy experience, however, it falls pretty flat. This game plays like an outdated in-browser game satirizing George W. Bush in the early 2000’s, but unlike those, the satire in this game doesn’t exactly work. I get that throwing pies at people is a common joke, but why does it have to be pies? Why not cats, to poke fun at one of his most insidious quotes? Why not taco bowls, to tease his Cinco de Mayo Twitter post? Why not bricks, to truly get my anger out? Any number of things like these would make the joke much more coherent as a piece of comedic political satire, but pies? Pies-in-the-face is a generic cliché, and as a piece of satire towards the Trump administration, it doesn’t feel particularly clever. Even a touch as simple as alternate skins for the pies would satisfy these wishes, but no such features exist. 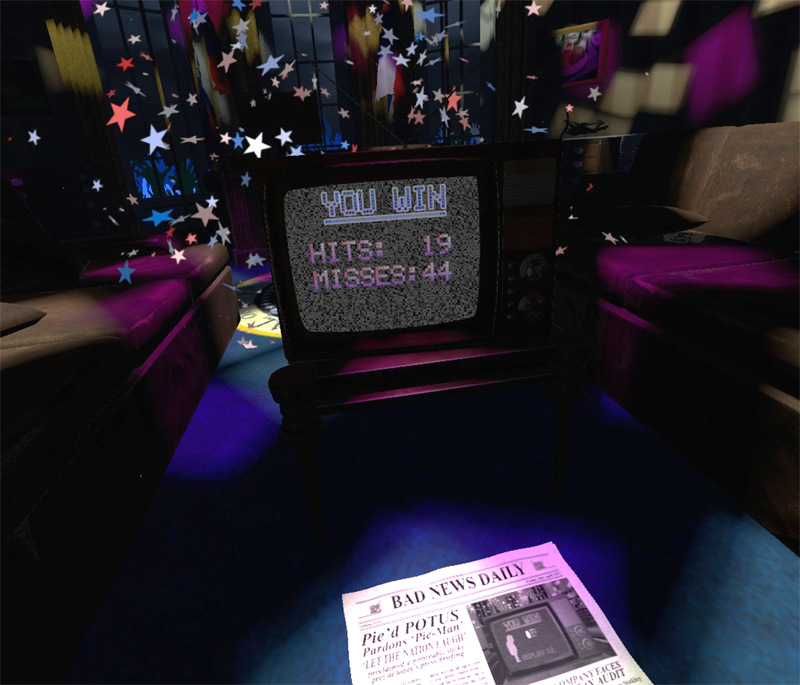 Wait…this is it? There’s no WAY that’s the entire game.

Throughout the game, you’ll hear quotes imitating Trump. Although I occasionally laughed at their sheer absurdity, the impression isn’t even good. It sounds like the voice actor was consistently on the verge of breaking into laughter. If these fake quotes were more clever, or done in a better impression, they’d have added solid comedic value to the game. As it stands, however, the satirical elements of this game could’ve done so much better.

What would I pay?  Whether you’d like to throw pies at Donald Trump’s face, or you’re like me and just want to throw things in general at him, this game provides some satisfaction. No matter how entertaining you find this game, however, charging any money whatsoever for Humble Pie is objectionable given its content value. When beating a game takes less time than a visit to the bathroom, it should always be free. I’d recommend playing this game if it were, but even for its low price of one dollar, I think you’d get more bang for your buck from a vending machine. This game is a one-playthrough novelty, and since it only lasts five minutes, I wouldn’t recommend buying it for any money.

Sunnyboy Entertainment provided The VR Grid with a review code for this title and, regardless of this review, we thank them for that.